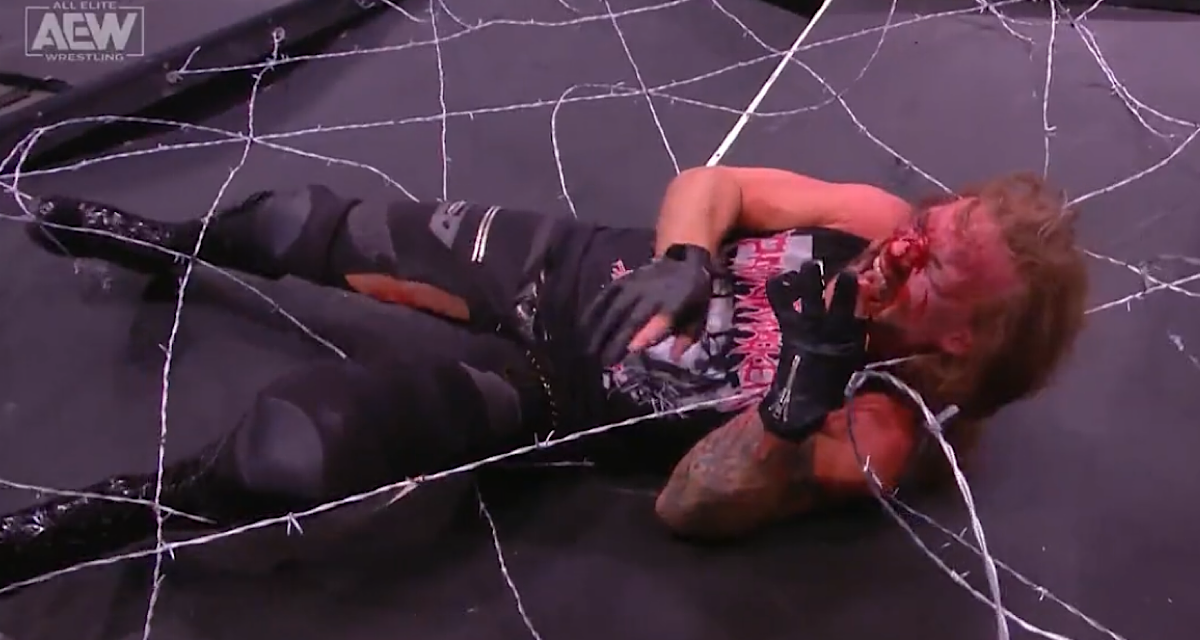 From the eight-month feud that brought Anarchy in the Arena and Blood and Guts to screens worldwide, Eddie Kingston and Chris Jericho’s rivalry culminated in a barbed-wire massacre – not in the sense of violence, but as an overbooked mess. With a poorly-decided winner and an apathetic post-match angle, Fyter Fest Night Two may have topped the original Blood and Guts match as being AEW Dynamite’s worst ending yet.

King tosses the undersized Allin around like chum as tonight’s shark cage looms in the distance. House of Black’s heavy looks monstrous in the opening goings, turning his opponent into a ragdoll through picture-in-picture. Allin uses his belt to finally take King down, following up with his signature bullet-like dive and a Code Red for two. But King again crushes Allin, reapplies his hanging sleeper hold from Royal Rampage, and puts it away with an absolutely brutal Gonzo Bomb for the clean pinfall victory.

King initiates a post-match assault that brings Sting to the ring before the lights go out. Malakai Black spits his black mist into Sting as King puts “The Icon” to sleep. But out comes “The Redeemer” Miro, who was previously misted, standing at a stalemate with his presumably damaged eyes covered. Like Drake said in 2015, House of Black has “got a lot of enemies” – but is Miro one of them?

Tony Schiavone starts to interview Cole Karter before Ricky Starks and Powerhouse Hobbs interrupt. “Rumor is you were sleeping with the fishes last time we saw you,” says Starks referring to Karter’s death as “Two Dimes” in NXT. “Now look at you, you’re here. You’re swimming with the sharks.”

Orange Cassidy and William Regal join the booth, and without saying a word, “Freshly Squeezed” is a more palatable commentator than most. Ring of Honor Pure Champion Yuta faces his former friends, but he’s obviously gone to greener pastures since joining the Blackpool Combat Club. He brawls with Trent Baretta, who has always had bad blood, and Chuck Taylor gets aggressive heading into picture-in-picture. Jericho Appreciation Society’s Daniel Garcia watches on backstage at a logical viewing angle as Moxley makes the comeback. Best Friends stifle the momentum with multiple piledrivers for two, and all four competitors are down. Eventually, Moxley applies a Figure Four on the outside while Yuta gets a sneaky pinfall over Taylor.

A package highlights the ROH Championship match this Saturday between Jonathan Gresham and Claudio Castagnoli. Meanwhile, Chompy the Shark Week mascot makes an appearance at the booth.

In-ring, Tony Schiavone introduces the new AEW World Tag Team Champions Swerve Strickland and Keith Lee, who are looking drippy. Rapper Kevin Gates is ringside “showing love”, and Lee asks when his deluxe album is dropping before toasting their victory. Out comes “Smart” Mark Sterling and a shirtless Tony Nese, who ask Gates to sign the petition to remove Strickland, which he declines with a right hand as the attorney gets caked.

Backstage, John Silver and Alex Reynolds are attacked by Butcher and Blade until “Hangman” Adam Page makes a “timely intervention.”

Professional hater Cage is sporting his new “Worked. Everyone.” t-shirt for his annual matchup. But it’s Luchasaurus doing the dirty work, single-handedly taking out the opposition while Cage is tagged in for the pinfall.

Jungle Boy makes his return to great fanfare, and Luchasaurus sides with his former partner. Cage does his best scalded dog impression, and Jungle Boy chases him through the crowd. Surely this isn’t over yet, because Luchasaurus Oscuro was working really well.

Gunn Club declines a match with The Acclaimed, but they’ll instead have a rap battle on Rampage. For those not in the know, Austin Gunn is a pretty good rapper – check him out!

Starks and Powerhouse Hobbs prove their worth weekly, and it seems everybody is rightfully expecting bigger things for them; although longest reigning FTW Champion, as Taz notes, is an interesting achievement. “Two Dimes” is looking real jacked, and there’s no need for testing following his release. After picture-in-picture, Starks avoids a 450 splash, hits a spear, and retains his FTW Championship.

Starks grabs a mic with “a little bit more in the tank, baby.” He declares a second open challenge, and out comes Danhausen to accept. “I didn’t mean right now,” Starks claps back, and the matchup is set for next week’s Dynamite at Fight for the Fallen.

Tony Schiavone interviews Kris Statlander, Athena, and Willow Nightingale before the following match, which was scheduled to be three-on-three before Leila Gray was dropped.

Schiavone is earning that paycheck, now in-ring to introduce the multi-titled FTR preceding their match against the Briscoes this Saturday. Dax Harwood tells a touching story about his daughter, fighting through heart problems, just like he’ll fight at Death Before Dishonor: “Briscoes, I’m gonna fight like an eight-year-old girl. And I’m gonna beat yo’ ass. Top guys, out.”

Speaking of Death Before Dishonor, Jay Lethal and Sonjay Dutt are interviewed about the ROH Television Championship match until Christopher Daniels interrupts. He issues a challenge for Friday’s Rampage in support of champion Samoa Joe.

Cargill takes the mic, and in her hometown, cuts a confident promo about being “that bitch.” Hathaway is ringside with rapper Jermaine Dupri, which would’ve been cool about 20 years ago. Nightingale and Athena deliver consecutive outside dives preceding picture-in-picture, and the latter trades shots with Cargill thereafter. The match breaks down as Athena attempts an apron powerbomb, but Cargill eventually puts it away with Jaded for three.

The ring is arranged with barbed wire as Excalibur bursts through a new HBO Max promo with his usual gusto. Justin Roberts’ microphone, even, is covered in barbed wire to introduce Daniel Garcia, Matt Menard, Angelo Parker, and Jake Hager into the shark cage – which is controlled by Ruby Soho ringside.

Kingston immediately attacks Jericho with Roberts’ microphone, at last making him bleed. “The Painmaker” is thrown into barbed-wire ropes and hit with a barbed-wire chair, but he recuperates with a top-rope hurricanrana into a flat barbed-wire table (take a shot every time you read “barbed wire”). After picture-in-picture, Kingston suplexes Jericho through a barbed-wire table as Tay Conti appears to attack Soho. Anna Jay breaks them up but joins her best friend Conti in the assault, bringing the shark cage down for the Jericho Appreciation Society – although Conti can’t get it unlocked, and “those yayhoos” shimmy through the bars instead.

Evening the odds are Ortiz, Jon Moxley, Wheeler Yuta, and Claudio Castagnoli to initiate a big ringside brawl. The competitors in-ring trade nearfalls, particularly Jericho powering through a finishing backhand. Kingston applies a barbed-wire stretch plum, but a returning Sammy Guevara breaks the submission, assisting in a barbed-wire Judas Effect to give Jericho the victory. In possibly the messiest ending in Dynamite history, Kingston scraps with Guevara and Jericho, misses a backhand, and throws the latter into a bed of barbed wire to an abrupt finish.

That was the worst finish in AEW Dynamite history. A completely overbooked, crammed gimmick match with the wrong winner. On top of that, a botched post-match angle that attempted to save Kingston but somehow made him look even worse. Along with a totally redundant set of matches and segments as the undercard, this one hurt to watch as an AEW fan.