Eric Young has ‘The Sickness’ 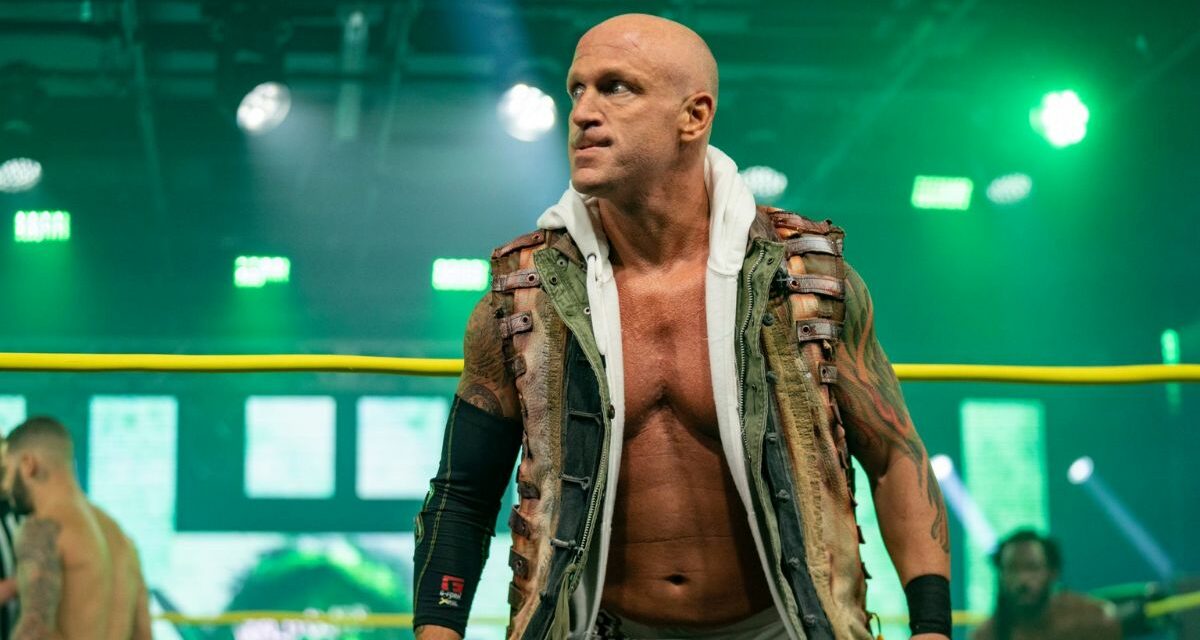 There has been a little bit of friction in the Violent By Design faction in Impact Wrestling as of late. On interviews, the group’s leader, Eric Young, has made reference to “The Sickness” and has called out to other members Joe Doering and Cody Deaner to do better.

Where’s it all going?

In a SlamWrestling.net interview, Young was playing things close to his chest.

“I don’t know if this was so much an argument, it was more of a reset. Things have not been going our way and I think we’re gonna have to change things around,” Young said. “The Sickness is as it will and take hold and maybe the three of us aren’t enough. Maybe we’ve got to reassess. The truth is, those guys are my brothers by choice. There’s no two other people that I’d be rather going to war with than those two.”

Adding members to Violent By Design hasn’t been ruled out.

Roddy Piper, especially in his later years, railed against “The Sickness” that was a part of professional wrestling, its twisted culture where people got away with too much behind the scenes, and that being the business itself was like a drug for performers.

Young has had “The Sickness” — an addiction to pro wrestling — for most of his 42 years on the planet.

“I think The Sickness is a pretty wide brush, right? I think Roddy is referring to it as, it can be this invited disease. I’ve had it since I was three years old. It bit me and I’ve been sick since then basically,” Young began, noting that there is a difference between Eric Young the character on TV and Eric Young the real person.

“Part of of the doing promos, and the verbiage of what I’m saying and The Sickness is, because I do believe wrestling can be better than it is. And in my opinion, in Eric Young’s opinion, it’s sick. And I think even the real me thinks that it can be better and there’s things that have changed, and I think they’ve not changed for the better. And I’m not saying I’m going to fix them on my own,” he said. “But the gimmick itself comes from a real place and a lot of times when you have something that has real feeling in it, and real belief, that’s when it’s the best. If you watch movies, or watch television, all of the best bad guys are people that believe they’re doing something but it’s because it’s the right thing to do. And everyone else is convinced that he’s wrong, but he knows that he’s right. Those are often the best and most compelling bad guys and I think a version of that is what we’re trying to do.” 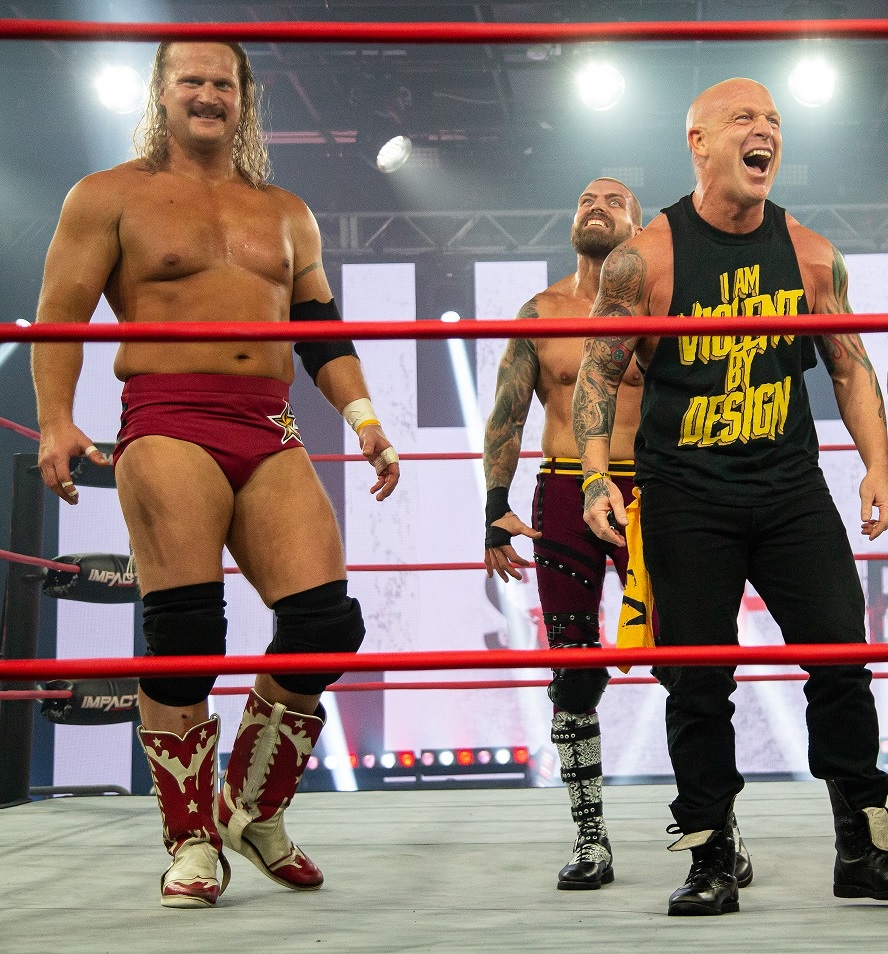 That applies to Doering and Deaner, who are legitimately his friends — and it shows.

Violent By Design isn’t done on Impact Wrestling, by any means, and Young hinted at a unique storyline.

“The truth is, I think we’re just scratching the surface with what we can do with the group. I pitched an idea a couple of weeks ago that seemed to trigger some genuine excitement and some real intrigue and we’ve been going back and forth and pitching around ideas,” he teased. “It’s something I don’t think has ever been done in wrestling and I think it can be really, really cool for us and really, really cool for Impact Wrestling. I’m looking forward to doing doing more of Violent By Design. Often now groups are formed and six months later, they’re fighting each other. This is going almost two years now and in my real world opinion is that we’re just scratching the surface on what it can be.”

At the recent Slammiversary pay-per-view, Young headlined, losing an Impact World title match against champion Josh Alexander. Young noted that he thrives on being put in a prominent spot on a card.

“It’s something I’m very proud of him. It’s not something that I take lightly. Being in that position, that’s a ton of responsibility. The truth is, as I’ve said this to [producers] Josh [Mathews] and to Scott [D’Amore], and in other interviews, I crave that responsibility, I want it. The more responsibility I feel the better I am,” said Young. “When I’m put in a position like that, when the bar is way up and I’ve got to rise up to it, and if I want to jump over it, I’ve got to really do something. And I feel we did that in Slammiversary, me and Josh, It’s proof that I can still do it and proof that I’m still enjoying it. And I am. This is the most fun I’ve ever had in my career, these last two years, and I’m gonna continue to do it as long as I can.”

Partly, Young wants to keep wrestling because he isn’t exactly sure what might be next. Yes, he’s done a fishing TV show and dabbled in other side interests, especially hockey and his beloved Nashville Predators, but backstage work, like producing, is not something he wants to do.

“I’m definitely not ready for that,” he said of producing backstage matches as an agent. “I did it for 16 weeks in the WWE as a favor to Triple H, he asked me to do it and I owe him a lot. A lot of people have different experiences with him. My experience with him was amazing. We’re still very friendly. We talk at least once a month sometimes more than that. I owe him a lot. I didn’t want to do producing, I wanted to be wrestling, I was an active wrestler. I was out in the buildings and I wasn’t doing anything, so I thought, well, why not? I can learn another side and see what really goes on.

“The process of it is maddening and it just wasn’t for me; 16 weeks, it was brutal. John Laurinaitis was the head of it and he said, ‘If you want it, the job is yours.’ I just told him I wasn’t interested. At some point maybe. I doubt it very much. I feel once I’m done with my in-ring career, which can be in six days, which could be in six years, I just don’t know. As I’ve always said, from basically 1997, I said, I will do this as long as I can do it the way I like, and the minute I feel that I can’t, I feel like, I don’t want to do something because I’m old, or I don’t want to do something because I’m hurt. or I’ve gotta be dragged through a match by somebody younger than me, I’ll retire — right in that exact moment, I will pack my bag, and I will walk out that door and I will never come back.”

For now, Young will continue to deliver his message of violence in Impact Wrestling … and that’s By Design.

The next set of Impact Wrestling tapings and the Emergence special are Friday August 12 and Saturday August 13 at Cicero Stadium in Chicago. Further details are available at ImpactWrestling.com.