Goldberg A&E Biography intense as he is 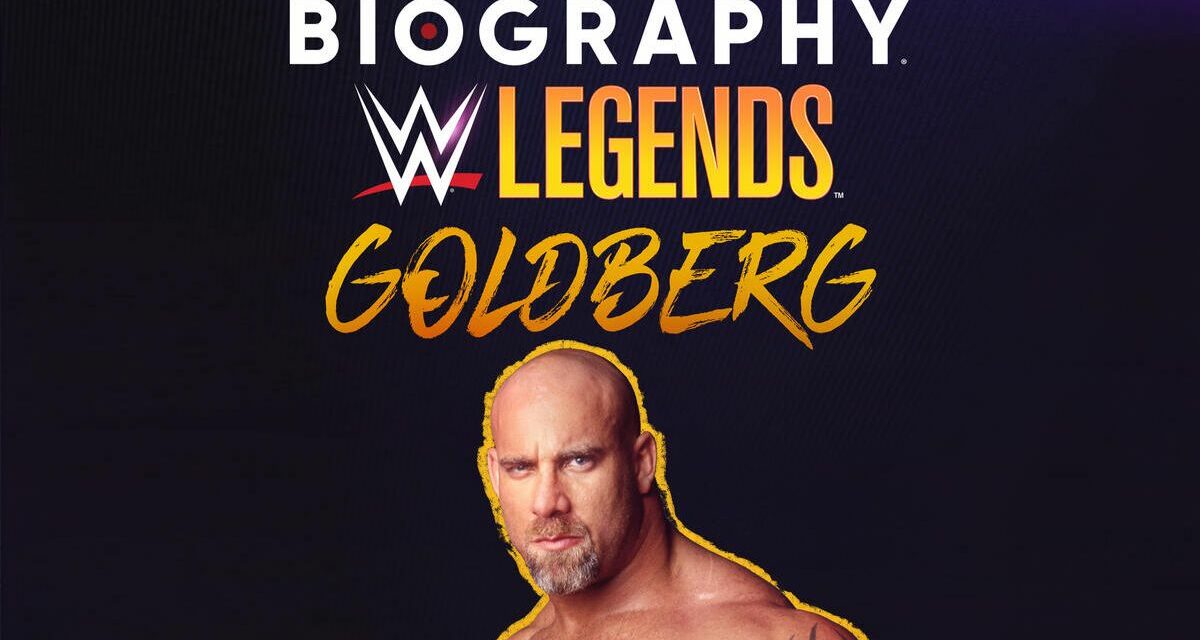 The latest offering from the folks at A&E Biography in its continual love-in for WWE was Bill Goldberg, but what really came through was Goldberg’s love for football.

Growing up Jewish in Tulsa, Oklahoma, Goldberg wasn’t a wrestling fan. Football was his love, and his two much older brothers played the game (he also had a sister … though we hear from none of them). He was a celebrated played at the University of Georgia, a nose guard who liked inflicting pain. “To be able to do it without being thrown in jail is an unbelievable outlet,” he said.

Announcer Jim Ross was actually a high school football referee in Oklahoma so knew Goldberg there. “He had a decent career,” noted Ross, but injuries kept him down.

An 11th round draftee by the Los Angeles Rams meant he was pissed off after being taken so late. He kept getting hurt being cut by the Rams. Up next was a brief trip to the CFL, but he didn’t like the pay scale and the instruction to lose 30 pounds to succeed on the wider field, so went to the World Football League, then to the Atlanta Falcons training camp.

When the NFL added expansion teams in Carolina and Jacksonville, Goldberg was taken in the supplemental draft by Carolina but had had surgery a couple of weeks before, reattaching his torn abdomen to his pelvis. He asked for his release from the Panthers and considered what was next. His accountant told him to get out and do something.

That ended up being the WCW Power Plant to learn wrestling, where everyone knows the story from there — learns quickly, gets pushed to the moon, becomes WCW World champion, loses and then disappears when WCW is sold.

Superstardom was great and all, but Goldberg wishes he could have done it in football. “I did [wrestling] to replace something I loved, and prayed that it filled the void of that said loved activity that I couldn’t do any more. Again, this is not a slight against the wrestling business or the fans. It’s just true. I’m a football player. I really didn’t know what I wanted.”

So, if we all know the story so well, what was new about this A&E Biography episode? Well, not much.

Certainly, A&E made little effort to find new and interesting talking heads. It was Eric Bischoff, Paul Heyman, Hulk Hogan, Jim Ross, Bret Hart and writer David Shoemaker … and that was it until his wife, Wanda, comes into the picture. What a huge missed opportunity to get more voices in there. Off the top of my head, how about someone to talk about having a Jewish superstar in pro wrestling? Someone who trained him in the Power Plant? Or Kevin Nash and the misguided decision to take the title belt off Goldberg with a cattle prod? Some football players?

Hart went off on Goldberg injuring him (again), and it was really the only negative part of the documentary. “Bill never learned to wrestle. That’s the problem. Bill was zero, didn’t have a clue. He just seemed to think I was a practice dummy,” railed Hart, and the exploration of the Hitman’s concussion issues are actually very revealing.

Shoemaker tries to address how “Oldberg” it all was, but when it’s the same “historian” talking again and again, credibility suffers. Of course, Goldberg’s shortcomings of a wrestler are addressed, but sort of glossed over. We never hear from anyone, aside from Hart and Hogan, who took those wicked spears and jackhammers. No one talked about inane WCW angles.

The other theme, besides football, was his intensity.

“Not many people were privy to the transformation of Goldberg the human to Goldberg the character,” noted Goldberg. Or as Hogan said,  “Goldberg in the ring is the amped up alter-ego of Bill the person,” and “it was intense when you were in the ring with him.” And Bischoff has to Bischoff: “Intensity is going to be Bill’s legacy.”

Both the Monday Night Wars and the merger of AOL and Time Warner have to be explained during the doc simply because Goldberg’s career are partly defined by them. He was one of the winners on the WCW side on Turner television, and then when WCW is shut down, he sat home for two years collecting his guaranteed pay rather than jump immediately to WWE (which didn’t want to pay him that much, though that is never said). “It doesn’t take a rocket scientist to figure out why I stayed home,” said Goldberg.

The asides rang from cute — watching his matches alone in a movie theater, playing baseball with his son, at waterside with his dog — to disturbing, with the glorification of his guns.

As with most of these Biography offerings, it’s the vintage stuff that resonates the most, like clips from football, or media appearances in WCW, or sitting down with a trainer after an injury. You see people that have passed or reminisce about memories, like how great Mike Tenay was as an announcer and how over the top Tony Schiavone was hyping things.

The negativity of his WrestleMania XX match with Brock Lesnar, with both man leaving WWE after, was interesting, but was hurt, again, by the same old same old voices. Goldberg said of his year-long WWE run, “I always felt like I was on the outside looking in.” He saw it as a business, and was not in love with pro wrestling. “I didn’t see eye to eye with a lot of the guys.”

Goldberg said that meeting his wife Wanda, on set in Edmonton while taping Santa’s Sleigh, was “the start of the new beginning” and that is reflected in the show too. The tone shifts.

“When I met him, he was already emotionally detached from wrestling. Three weeks after we met is when he officially retired,” said Wanda Goldberg. He had shut that part of his life off. “I never, ever shared that world with him.”

Therefore, Wanda and their son, Gage, is the reason behind him returning to WWE in October 2016. It’s a good story and all, but we don’t get any details: Who called him to return? Was there much convincing? What was the money like? What was the reaction like in the dressing room.

“No one on the planet can understand what I went through getting back into the business after having such a long hiatus of being Goldberg. Being believable, that you can eat just about any human being alive, is really difficult to do at 45 to 50 years of age,” Goldberg said, and admitted he was worried about looking like a fool.

If anything, the documentary spent too long on his return (though the mess in Saudi Arabia is ignored).

It has apparently been a different Goldberg in recent years. “When I came back, I was actually trying to have a good time, whereas before, I hadn’t even considered having a good time,” he said.

The obvious ending is his WWE Hall of Fame induction in April 2018. “How the hell did this happen?”

Did I learn some things? Sure. Did I want more? Yes. But if there is indeed a “next” documentary on Goldberg, let it be outside of WWE’s control.