Impact: Chelsea Green puts Mickie James down… and out? 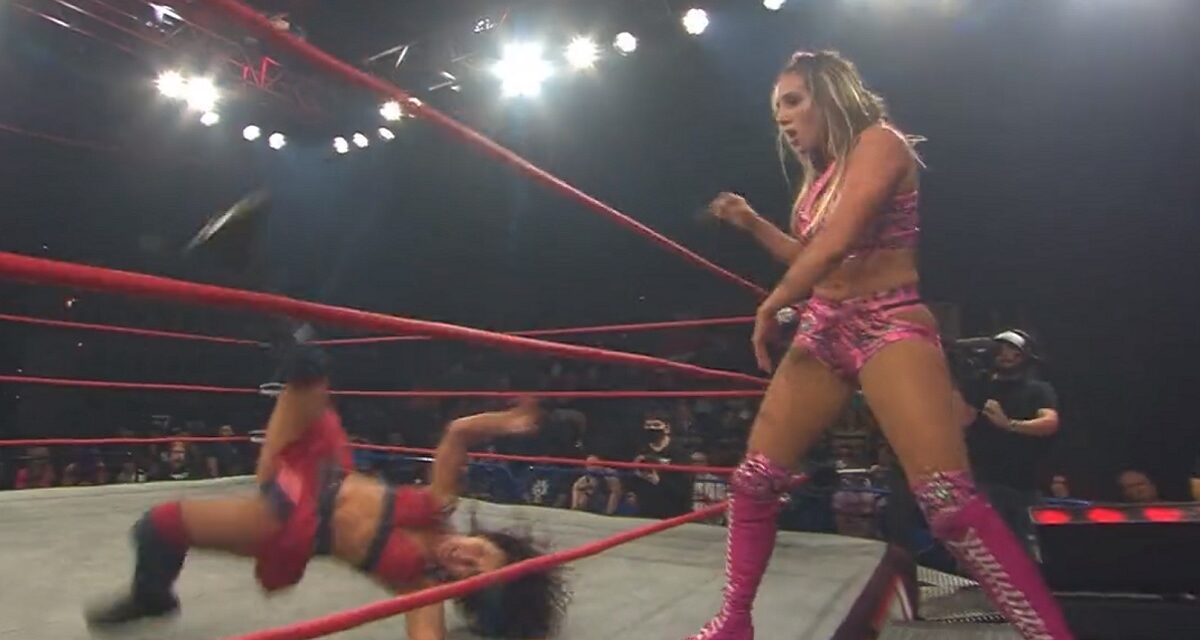 It’s been about a year since Mickie James returned to Impact Wrestling, and during that time, she’s certainly made an impact (pardon the pun). In addition to winning the Knockouts Championship, she’s had some really memorable matches against various opponents. On Thursday night, she had another great match – this time against Chelsea Green – and her comments afterwards suggested that it could be her last match in the company for some time. If so, she certainly went out on a high note. Even if she didn’t go out with a win.

The show started with Violent By Design members Deaner and Joe Doering in the back. They were concerned that Eric Young hadn’t shown up, and they were unsure if he would be there for their scheduled six-man tag team match, which was about to start. They wondered if this was a test, and set out to win the match even at a 3-on-2 disadvantage, in hopes that doing so would redeem them in his eyes.

Eric Young didn’t come out with Deaner and Doering, and actually didn’t make his entrance until immediately after the bell had rung.

The Guns and Alexander worked well together, making quick tags, and dominating VBD, until some shenanigans allowed Young to take a cheap shot on Alexander and turn the tide. They isolated Alexander for some time, before he finally escaped and got the tag. The Guns went wild for a while, dazzling with their tag team acumen. But business really picked up when rivals Alexander and Young squared off, and they had a strong sequence together.

There was some dissension in VBD and that allowed their opponents to capitalize. They worked together to put Doering out of commission, and then Shelley and Alexander locked on submissions on Deaner and Young, respectively, and both members of VBD tapped out.

After the match, Chris Sabin handed over Josh’s World Heavyweight Championship belt, but both he and Shelley appeared to stare at it with a great deal of interest before he did. Hmmmm.

This was good. I say this every time the Guns wrestle, but they both look as young as when they established this team back in 2006. Hopefully they don’t split up VBD right now, despite the tease. They could probably use Doering differently and to better effect if they split, but not sure they would be able to find a better use for Young and Deaner at this point.

A teaser video aired for Killer Kelly, who will be making her way to the company soon.

This one started off with some heavy hitting by both men, but Maclin was able to eventually level Storm with a huge shot. They exchanged some more slobber-knockery for a while. Storm seemed to have things well at hand when he hit a huge Hurancarana off the  top and followed that up with a big Flying Elbow, but Maclin was able to kick out. Storm hit a Lung Blower, but Maclin used his leg strength to shove Storm off from the rollup pin attempt, and that sent Storm face-first into the turnbuckle where Maclin had previously ripped off the padding, leaving the steel joist exposed. This staggered Storm and left him prone for a Double Arm DDT by Maclin for the pin.

After the match, Maclin was celebrating, when the arena lights turned off. When they turned back on again, Sami Callihan was in the ring, brandishing a baseball bat wrapped in barbed wire. But Maclin had already high-tailed it out of there, and was standing on the entrance stage, proud that he’d outsmarted Callihan in this instance.

This was a pretty hard-hitting match. While it’s unfortunate we didn’t get to hear Storm’s awesome theme song, “Longnecks and Rednecks” for a second time (seriously, that tune is great), Maclin getting the win was the right call. At some point, he could be a good contender for Alexander, once his business with Callihan has concluded.

Instead of their normal flashback moment, they presented the Ric Flair Moment of the Week, courtesy of Starrcast V weekend, where Ric Flair will wrestle his final match. The clip was from Lockdown 2010 when Team Flair fought Team Hogan. Flair tried to cheat to help his team win, but then got pummeled and bloodied by Hogan with some brass knuckles before getting dropped onto a pile of thumbtacks where he could only watch his team lose. Strange choice if this was supposed to honour Flair.

The Motor City Machine Guns came up to Impact Executive Vice-President Scott D’Amore outside his office. Sabin said that when he held Josh Alexander’s title, it gave him the itch to become the World Champion again, so he asked D’Amore to consider him when determining Alexander’s next challenger. D’Amore said that he was impressed by Shelley’s performance in the tag match earlier. So he said that next week, Sabin and Shelley will have a match, and the winner will get a title shot against Alexander at Emergence, which takes place on August 12th.

It was announced that Mia Yim and Deonna Purrazzo were both banned from ringside for this one.

They started off with some HLA and for those few seconds this was my favourite match of all time.

Then they started beating the heck out of each other, brawling all over the ring, and even taking their fight to the floor, where Mickie hit a Flying Lez Press off the apron to the floor. Back in the ring, Green hit Double Knees that hurt Mickie, and then continued to wear down Mickie with a Camel Clutch. Mickie broke loose and then punished Green with a straight Boot to the Head, before Green fired back with vicious shots. The action went back-and-forth, with both women going for broke, alternating between hitting moves and just good old-fashioned hockey brawling.

Mickie nearly got the pin after a Mick Kick, but Green grabbed the bottom rope to break the count. After a Stomp, Green tried to steal a pin with a handful of tights, but the ref saw the cheating and stopped the count. But he didn’t see the next time she cheated, putting her feet on the ropes while pinning Mickie in a surprise rollup for the 1, 2, 3.

This was the best match on the show so far, and the crowd was really hot for this one. It wasn’t always pretty, but this was just a really good fight.

Taya entered Rosemary’s lair where they were planning to head into the Undead Realm to find Havok. They transported there, and found themselves in a dark forest. Taya was mesmerized by the light – that Rosemary had told her to stay out of – and headed straight for it like she was at the end of Mr. Toad’s Wild Ride. She found herself in a white void (I guess there was a vacancy after Miro escaped), and ran into Havok, who was now much less goth and had pink hair. Rosemary noticed Taya had gone, and so went into the light as well. When she got there, Taya introduced her to… Jessicka, who gave Rosemary a big, friendly smile.

They showed a clip from the BTI Pre-show, where Bhupinder Gujjar pinned Johnny Swinger after the Gargoyle Spear.

They then cut to the back where Gujjar reminded Digital Media Champion Brian Myers that Myers had promised Gujjar a title shot if he beat Swinger. Myers waffled on the stipulation and said that Gujjar would only get a shot once he was verified on social media.

At the bell, the crowd started chanting “Masha’s gonna kill you” and they weren’t that far off. Despite Tenille trying to duck and hide, Masha caught her, ending her quickly after a Helluva Kick and a Snow Plow. Madison looked really scared throughout all this, as it seems Masha is on a mission to destroy her next.

This was exactly what it needed to be. Slamovich continues her Goldberg-esque dominance.

They showed a clip from last week where Deaner and Joe Doering beat up X-Division Champion “Speedball” Mike Bailey after his title defense against Alan Angels.

In the back, Gia Miller asked Bailey about that moment. Bailey said that Deaner got his attention last week, and now he has a match against Bailey next week.

Gia caught up to Mickie James who was leaving the building, suitcase in tow. Gia asked Mickie about her match from earlier and what that meant. A solemn Mickie said that you’re only as good as your last match, and that she was going home, before heading out the door. If Mickie is really leaving the company for a while – maybe heading back to NWA? – then she left on a really high note with her match tonight.

As Honor No More were making their entrance, Heath ran onto the entrance stage and attacked Vincent, dropping him with the Wake Up Call, and then skedaddled through the crowd, much to the chagrin of HNM.

Honor No More was ready for Bullet Club before being blindsided by another hit and run from @HEATHXXII!#IMPACTonAXSTV pic.twitter.com/fqpGG3Aheq

In the early goings, Ace Austin impressed, getting the edge over both Taven and Bennett, leading to a moment when all eight men got into the ring, only for the Bullet Club to send HNM to the floor as the show headed to a commercial.

Back from the break, and the Bullet Club were in control of the match, with Taven being on the wrong end of the beating. But some dirty tactics in the corner allowed HNM to take over, and they took their anger out on Chris Bey, with Edwards in particular hitting him with some hard shots before Taven and Bennett used their OGK combo moves to batter him.

Bey finally scrambled to his corner and got the tag. Anderson and Gallows looked to end Taven with the Magic Killer, but then everyone ran in and the match devolved to chaos. A parade of finishing moves followed. The Good Brothers tried again for the Magic Killer, but as the ref tried to clean out the ring, he missed Maria hit Gallows with a low blow from the floor. The pain put Gallows into a Festus-like daze, and he was unable to withstand a Boston Knee Party by Edwards followed by a huge Frog Splash by Taven, and that was enough to keep him down for the count.

This was good, though the dynamic felt a bit strange, since the Bullet Club aren’t really likeable, yet they were ostensibly the babyfaces in this match. One other complaint, and this is often the case with HNM’s multi-man matches, is that the refereeing left a lot to be desired. Too often, there were multiple people in the ring at the same time for too long with the referee just standing there looking incompetent. With Taven getting the pin on Gallows, it stands to reason that OGK will likely be next in line for a Tag Team Championship match against the Good Brothers soon, which could make for a fun feud. Austin keeps improving and it behooves them to give him even more prominence in this faction – of all of the BC members in Impact, he’s got the most personality and really could shine in the role of leader.

With a month to go until Emergence, this week’s episode was a good palate-cleanser. It wasn’t too in your face with angles – though the Rosemary/Taya/Havok segment will likely irritate purists – but rather focused a lot on the in-ring action. On that front, all of the matches this week delivered, though the match between Mickie James and Chelsea Green was the definite highlight of the week.