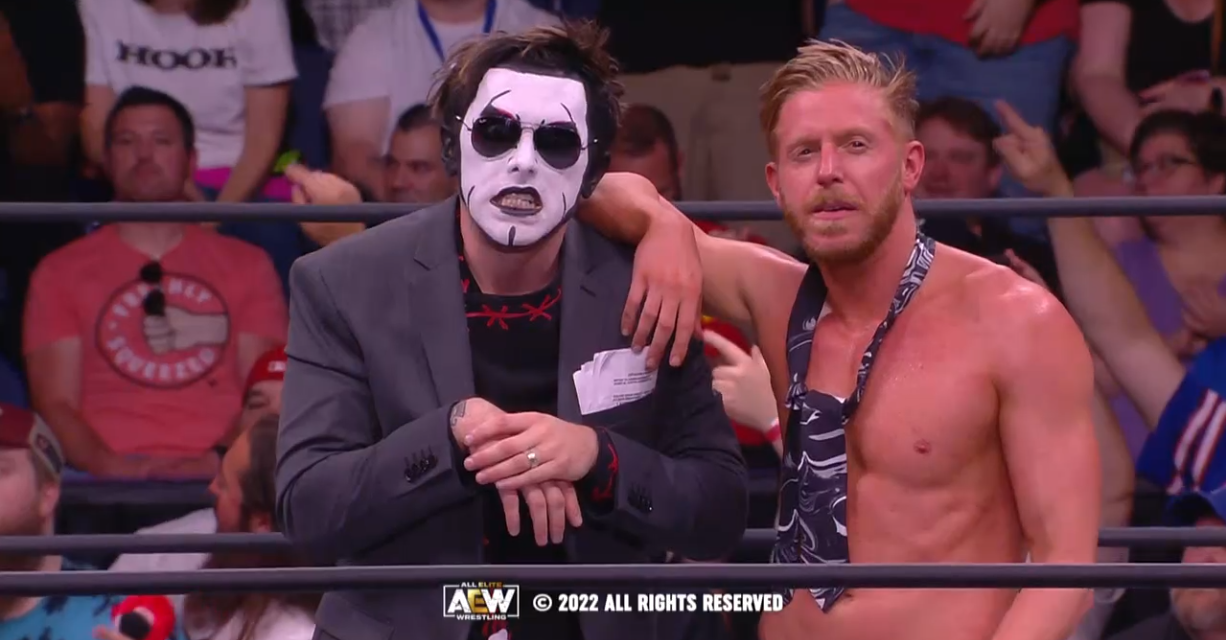 It’s Friday night and you know what that means! It’s time for the show run by a guy that isn’t embroiled in several scandals. (Too soon?) We are getting some Ring of Honor mixed into our Dynamite this evening, though. Let’s get to the action.

Rampage doesn’t mess around. Both men are in the ring as the starts. The announcers are still selling Kingston coming out of the Blood and Guts match nine days ago. Takeshita takes advantage of a clean break, punching Eddie in the gut. Kingston pays him pack with a gut wrench suplex. The two trade shots in the middle of the ring, until Kingston thumbs him in the eye. Eddie follow with the machine gun chops. Takeshite with a flying lariat and follows with an elbow strike. He hits the Blue Thunder Bomb, but Eddie kicks out at two.

After the commercial break, the two fight on the apron. Takeshita hits a German suplex on the apron. On the floor, Eddie responds with an exploder suplex and both men are down. Konosuke barely beats the ten count to get back in the ring. Kingston hits a massive lariat and follows with a Liger bomb. Takeshita kicks out at the two count. Konosuke with two hard shots and hits a brain buster, but can’t get the pin. Both men are on their knees trading blows. Kingston collapses into Takeshita, but recovers to deliver chops and a suplex. Konosuke comes back with a lariat. He hits a jumping knee and Kingston instinctively throws a back fist. Takeshita hits the mat and Kingston collapses on top of him. The ref makes the three count to give Eddie the win.

The Liona boys start the fight at the sound of the bell. Greshman is knocked out of the ring, while Moriarty takes a beating in the ring. Grishman accidently walks away from his corner on a distraction from Tully, so no one is home as Moriarty looks for a the tag. Lee with a low bridge and is able to get to his corner and get the tag. But he doesn’t. Gresham pulls his hand back and walks away from the ring. He hugs Tully on the ramp. It was a set up the whole time. Toa with a discuss lariat and Khan hits a gut buster. Toa covers and gets the pin.

Winners via pinfall: Gates of Agony

Eddie Kingston once again turns his attention on Chris Jericho. The JAS is going to pay for what they did to Ruby Soho. He wants Jericho in a barbed wire death match.

The announcers hint at Serena wanted Martinez’s ROH title, so maybe that will play a part in this squash match. Poor Kayla and Christina didn’t even get a proper entrance. Serena tries to show up her partner, so Mercedes just tags herself in. The two do team up to put the hurting on Christina. Deeb makes a blind tag and the two have a quick word. Deeb applies the Serenity Lock and Christina taps out.

Martinez has to force Deeb to break the hold after the bell. Deeb takes exception and lays out Martinez. She then puts her in the Serenity Lock.

Tony Schiavone is backstage with Jonathan Gresham and Tully Blanchard. Gresham is on board with what Blanchard wants to do. Next week, Gresham will have to face Lee Moriarty with the Ring of Honor title on the line.

Mark Henry mediates the final words between the competitors in the main event. If Orange Cassidy loses he has to sing the petition to remove Swerve Strickland from the AEW roster. Danhausen tries to object, as he is trying to tie his tie.

Matt Sydal isn’t pleased at all with Jonathan Gresham. He calls him dishonorable. There will be repercussions.

Nese takes down Cassidy with a face lock and then runs him over with a shoulder tackle. Orange finds some pocket power in the middle of the ring, rolling away from elbow drops. Cassidy ducks under a lariat and hits a low drop kick. Nese stops Orange dead in his tracks with a back elbow. Cassidy with a crucifix pin; Nese kicks out. Orange goes up top, but gets tagged with a hammer uppercut. He follows with a gut buster. Orange hits the floor, allowing Sterling to get in some cheap shots. Nese misses a moonsault in the ring.

After a commercial break, Nese whips Cassidy across the ring. Orange looks for a DDT, but Nese counters into a northern lights suplex. Nese pummels Cassidy in the corner. He sets Orange on the tope turnbuckle. Cassidy blocks the superplex and the two trade punches. Nese crashes to the mat after a haymaker. Sterling jumps to the apron. Danhausen yanks him to the floor. Nese drop kicks Danhausen before he can curse Sterling. Orange looks for a DDT, but Nese blocks it. Cassidy counters with Stundog Millionaire and follows with a Michinoku Driver. Nese kicks out at two. Nese ducks the Orange Punch and hits a German suplex. Nese with a roundhouse kick, but still can’t get the pin. Cassidy counters a pump handle driver with a DDT. He follows with another DDT and goes up top. He hits a diving DDT. Orange covers, but Nese kicks out at two. Sterling jumps back to the apron, so Orange gives him the kicks. Sterling acts likes he is really hurt. Nese hits the pump handle slam, but Orange kicks out at two. Nese lowers he knee pad. He misses the running knee in the corner, hitting the turnbuckle. Sterling hits the ring as the ref checks on Nese. Danhausen stops Sterling from doing anything and then curses Nese from the apron. Orange Cassidy hits the Orange Punch and covers to get the win.

If are a fan of Ring of Honor talent, tonight was your night. If you aren’t, well, the wrestling was really good. Orange Cassidy and Tony Nese had no business putting on a match like they did on Rampage. Do yourself a favor and check it out.