Impact: Yim and Purrazzo battle to see who emerges as the new contender 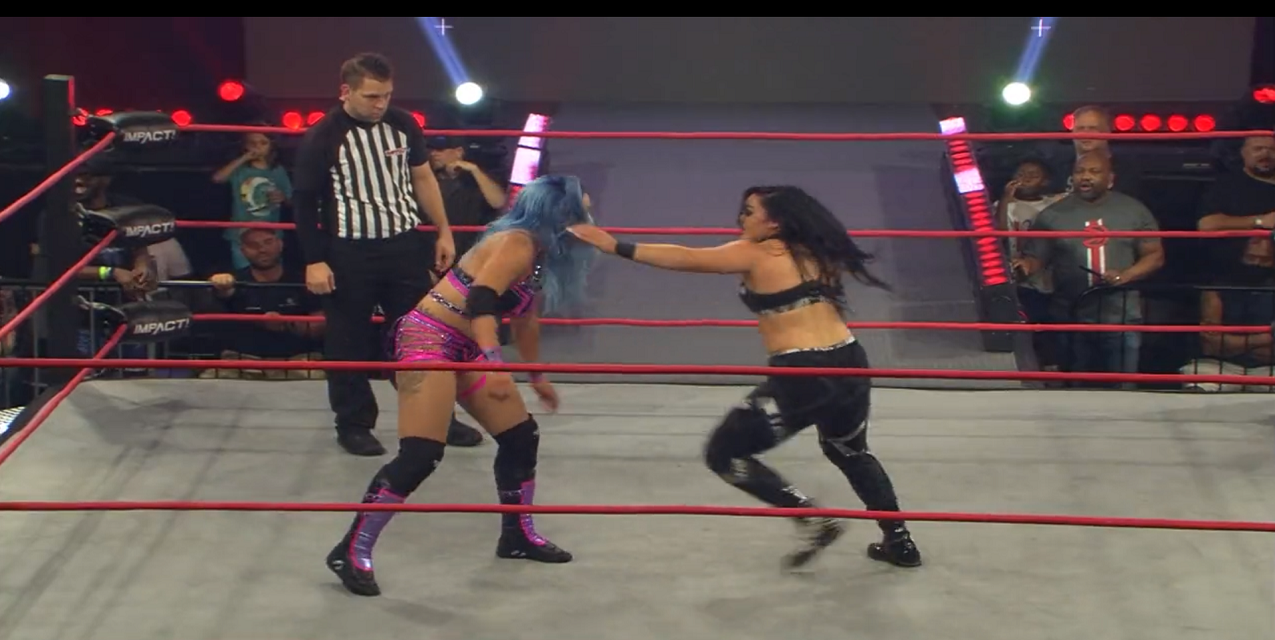 Greetings and Salutations all! We are working towards Emergence on Friday August 12, 2022. This week we are seeing the fall out from Against all Odds and seeing who will challenge Jordynne Grace for the Impact Knockouts Championship at Emergence. Without further ado, lets get to it.

Alan Angels, fresh off his stint with AEW and The Dark Order gets a random title shot to start the show. Bailey attacked Angels with his rapid, quick fire kicks. Angels was sent to the outside after a flurry of kicks. Baiey moonsaults Angels to the outside. The tables were quickly turned as Angels got the advantage on the outside of the ring and delivered a frog splash to Bailey on the outside.

.@SpeedballBailey welcoming @Alan_V_Angels to IMPACT Wrestling with a HUGE Moonsault to the outside of the ring! #IMPACTonAXSTV pic.twitter.com/Wtk0wTGNiU

Bailey then landed a kick off Angels’ jump off the top rope. Angels made up for this as he hit a Spanish Fly on Bailey. Angels hits a Halo Breaker but Bailey was able to get up at two.

Angels went for a Wing snapper but Bailey countered this, went for more kicks and got the advantage he desperately needed in this match after Angels missed another attempted Frog Splash. Bailey hit a spinning kick into his ultimate weapon (450 splash knees first onto the back). Bailey went for the pin and scored the win to retain his title.

Deaner called out Josh Alexander but was greeted by Eric Young, who is making his first appearance since Slammiversary. Young is upset at how Deaner and Doering have been acting and said “The Sickness” has taken over both of them.

Young threatened to kick them out of VBD but Deaner apologized and begged for another chance. Young gave them one more chance before walking away on his lonesome.

Deonna Purrazo and Chelsea Green hype up the Purrazzo/Yim Number one contenders match. Gail Kim interrupted them and told Green that she will face Mickie James next week with everyone barred from ringside.

Miguel was working through an injured left leg which Kid targeted the entire match. The injury came on Friday’s Against All Odds special in his match against Mike Bailey.

After Kid controlled the match for a bit he landed a Michinoku Driver and nearly got the win but Miguel kicked out. Miguel with some more limited offense to try to make the match an actual fight.

Miguel’s leg was failing him so he resorted to a more ground based offense. Kid was caught up and Miguel hits a Cross Rhodes for the pin and the win!

As Impact is helping out with promoting of Ric Flair’s last match we get a look back at Flair’s Impact moments.

January 4, 2010: Flair showed up in a limo to interrupt Kurt Angle and AJ Styles.

Check out The @RicFlairNatrBoy Moment Of The Week presented by @StarrcastEvents!

Deaner and Joe Doering are tearing things apart looking for Alexander. Sabin and Shelley are randomly there and the two teams end up brawling. Security and Alexander break them apart

We get a Killer Kelly Promo:

James Storm and Chris Harris, America’s Most Wanted are in the back and talked about their match at Against All Odds. Harris said that this could be his run. Storm said that he still has some unfinished business to take care of.

Check out what @JamesStormBrand and @AMWwildcat had to say about joining forces one more time as America's Most Wanted at #AgainstAllOdds!#IMPACTonAXSTV pic.twitter.com/4UwzVUdEk2

Storm is looking for Moose. They go into Steve Maclin’s locker room for some reason on their search for Moose and Maclin said he thought Friday was their retirement match. Storm got upset and challenged Maclin to a match next week.

PCO with Vincent vs Black Taurus with Crazy Steve

PCO is trying to prove hismelf to Honor No More. PCO gets the early advantage with a set of clotheslines on Taurus. Taurus is perfectly set up in the corner of the ring as PCO hits a Cannonball on him.

After some more PCO offense, Taurus makes a brief comeback with a sling blade. Taurus then hits an elbow on PCO. Taurus went for a twisting moonsault but missed. PCO quickly hit a reverse DDT and a PCO sault for the pin and the win.

After the match, Honor No More came out to congratulate PCO. Honor No More focus their attention on Crazy Steve and were about to attack him until Heath made the save and attacked Kenny King.

Good Brothers, Chris Bey, and Ace Austin made fun of Honor No More. They throw a challenge to HNM for next week

The new Digital Media Champion, Brian Myers was walking as he started talking to Ziggy Dice and Johnny Swinger. The three of them are bickering until Bhupinder Gujjar said he wanted Myers’ title. Myers throws a challenge for Gujjar and Swinger to face off next week to see who will face him.

This match was a very fast paced match but possibly a bit too short. Swann hit a 619 on Shera then made sure that Singh was also taken out to ensure there would be no more distractions. Swann then hit a 450 splash for the quick rehab win after losing to Myers at Against All Odds.

.@MahabaliShera is tossing Rich Swann around like a rag doll! #IMPACTonAXSTV pic.twitter.com/I5eX6w9c9n

The Influence is not happy with Gisele Shaw after they think she didnt try hard enough on Friday’s Against All Odds. Rayne and Dashwood also blame Shaw for Misha Slamovich’s threat.

Taya Valkyrie is trying to calm down Rosemary who thought that they were outnumbered at Against all Odds. Rosemary said that she can get them help in the Undead Realm and told Valkyrie not to go with her. Valkyrie talked her out of going and said they they will find Havok next week.

This is the first time these two ladies lock up in Impact in a one on one match as they were both in the Queen of the Mountain Match at Slammiversary. The winner will earn a shot at Jordynne Grace’s title.

This was a back and forth match. Yim took the early advantage that saw Purrazzo in the outside of the ring. Yim hit a top rope dive on the outside. Yim throws Purrazzo back in the ring and got some very close near falls.

Purrazzo was desperate for some control in the match and she was able to get some as she focused all of her attacks on Yim’s right arm to set her up for her submissions.

Yim hit a power bomb and a package pile driver for a wo count that looked as the kids say “sus” as it looked like a three. Purrazzo continued her focused attack and the two traded back and forth punches. Yim hit another package piledriver and a Eat Da Feet for the eventual win.

After the match, Jordynne Grace came out to shake Yims; hand. They will fight in August’s Emergence show.

This was a fine episode of Impact TV. We had a great match with Bailey and Angels, an okay match with Laredo Kid and Trey Miguel and a show stealer with Mia Yim and Deonna Purrazzo. The Knockouts division and X-Divisions are firing on all cylinders and becoming must watch wrestling week to week.

It will be interesting to see what happens with Violent By Design and Josh Alexander. All in all, this was a very fine wrestling show.