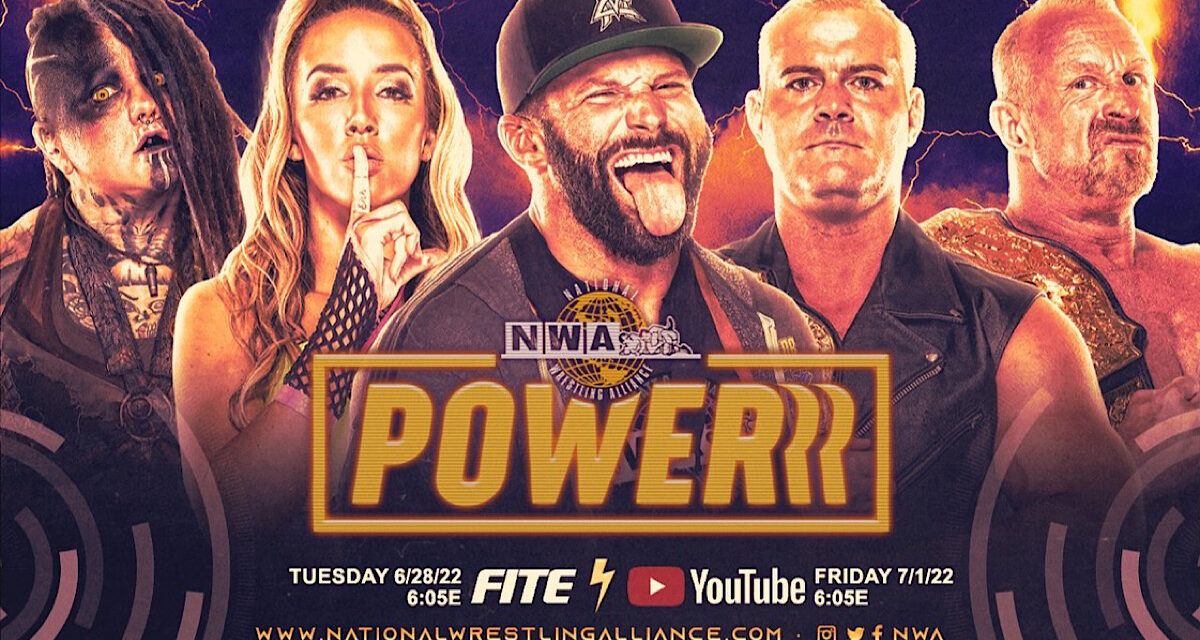 Thhe NWA Powerrr road trip rages on as the National Wrestling Alliance continues with their  KnoxOut offering. Not only will we hear from Matt Cardona and his injury status, but the main event with have La Rebelion issuing their rematch clause for the NWA Tag Team straps currently held by Doug Williams and Harry Smith of The Commonwealth Connection.  But Bestia 666 and MechaWolf will have the advantage in a Lucha Libre Rules match.  Will this end up being a short title reign for Smith and Williams?

We’ll find out later as we are coming to you from the Knoxville Convention Center in Knoxville, TN. Joe Galli, Tim Storm, and Velvet Sky have the call, and we get a cold open as Kyle Davis joins Matt Cardona in the ring to start the show and asks how the bicep recovery was going, but the former champ is Alwayz Ready (see what I did there) to flip the script and asks who pinned him.  There was no one, concedes Davis, and so Cardona states that he is *still* the real World Heavyweight champion.

Davis follows up with another question regarding the current NWA champion Trevor Murdoch and Cardona says all he’s doing is keeping it warm for him.  But He mentions his stable of Chelsea Green and The Cardonas are going strong, and they showed Bully Ray a thing or two when they were able to Get The Tables, he chuckles.  Cardona looks straight at the camera and he  has a message for Billy Corgan; he wants him to be a man of his word, and when he comes back at full strength  he wants a shot at his g**damn title.  Strong words, and he will definitely be ready when the time comes

Missa Kate and Jennacide vs Max the Impaler and Chelsea Green

Max still has the pom poms of Ella Envy on her ring gear, and if ever there was a “Beauty and the Beast comparison to make, Green and Max are the poster children for this mismatch made in…Heaven?  Hell?  A booker’s twisted rib?  Eh, you be the judge.

Green and Kate decide to square up to start the match, and the Chicago native is able to take on Cardona’s hot wife.  Kate and Jennacide keep Green isolated, and at one point The Cyborg tags in and gets Green in a delayed suplex while she does squats (see, kids?  Never miss an opportunity for leg day) before slamming Green to the mat.  She goes for the pin, but Max gets in the ring to tag into the match but the ref stops it because Max did not hang on to the tag ropes.  Once Green gets Kate in her corner, now Max tags in and The Impaler uses Green as a weapon throwing her at Kate.  Max then curb stomps Kate to the mat, and tags back to Green, but Kate gets the hot tag to Jennacide and she gets an airplane spin to a stunner on Green to cover, but Max breaks the  pin to drag Greeenher to corner and Now we have a Cyborg versus Impaler facedown.   Max throws Jennacide out of the ring,  and gets Kate in the Welcome to the Wasteland finisher to get the pin.

Your Winner via Pinfall:  Max the Impaler and Chelsea Green

if your scratching your head at what just happened, just run with the tag pairing.  The bigger question is if this can be a tag team to face Pretty Empowered down the road.

May Valentine is with Rodney Mack, and she ponders what keeps him motivated the NWA.  Mack says an individual has got him focused and on a mission for championship glory, and his identity will be revealed later.  Hmm, color me intrigued.

Now for some fast paced action with a…

Aguilar and Hawx are ready to mix up and Sal…sits cross legged, and neither man can figure what the hell is going on.  They set Sal to the side Aguilar and Hawx go to work, and the younger member of Hawx Aerie utilizes his technical skills to keep Aguilar down.  Now Sal makes his presence known and Aguilar manages a crossbody to cover for a pin, but Sal stops the momentum with a bite to his head, and punts him square in the chest.  Sal looks confused and Hawx schoolboys him for a two count.  Now Aguilar manages with Sliced Bread #2 to a pin on Hawx, but Sal breaks the pin cover.  Sal tries some unique offense and he nails Aguilar with a vicious facebuster that looks like a badly rotated Michinoku driver, and he runs in the corne to get Aguilar with the Lost Love flatliner, and he… sits cross laegged again biting the ring rope and just looking out of his damn mind.  Hawx is just perplexed but shrugs and uses the opportunity to deadlift Sal into a back suplex, and then he cinches the Hawx Clutch (a Boston Crab variation that bends him in half) and Sal taps out.

Your Winner via Submission:  PJ Hawx

Heading backstage again with May Valentine, and she is with La Rebelion with an important issue.  Bestia spouts something in Spanish and MechaWolf translates to this:  They added prestige to the NWA tag team division, but  claims The Commonwealth Connection cheated. MechaWolf says he went to Billy Corgan and they will compete in a Lucha Libre Rulesmatch, and they will show Williams and Smith how tag team action is done.  Dios mío, indeed.

And it’s time for hard hitting action with…

My reaction at seeing this was this:  what in the name of Terry Funk is Stevens doin, but as Galli and company mention he now has a managerial license.  Guess retirement doesn’t suit him, but leading on May Valentine about heading to Brazil and staying retired.  You heartless brute! You led her on and…huh?  Oh right.  The match.  I’ll console Valentine later

in any case, one half of The Country Gentleman starts strong but the Redd Dogg takes him down with a flying shoulder tackle to a spinebuster.  Mack Follows up with Ric Flair-style knee drops but the Adorable one gets back to a swinging neckbreaker for a one count.  Stevens attempts to inspire and fire up Mack on the outside, and the Redd Dogg clotheslines Andrews and then follows with a powerslam for a two count.  Andrews attempts a running powerslam, but Mack gets out of it and cinches the Euthanizer sleeper hold for the submission win.

After the match, Stevens eyes Andrew’s, but just as quickly snaps out and he heads backstage with Mack.

We have recaps of last week’s NWA USA and the debut of Thrillbilly Silas and Pollo Del Mar facing Luke Hawx,  but seriously read it here.

La Rebelión enter first, and as The Commonwealth enter to ringside, Bestia and MechaWolf  blindside them by diving to the outside of the ring, and good luck to me to keep up with the action.

It’s a tag team tandem as La Rebelión keep the big man Smith grounded, and stomp on him on the mat.  Bestia keep up the beating on Williams, but Smith pushes Bestia to a roll up by Williams for a two count.  Now, Williams grounds Bestia and The Commonwealth Connection take turns isolating the Tijuana Gremlin.  MechaWolf nails a stiff kick to Williams and Bestia gets in on the action.  Williams manages to tag in Smith and he  gets Bestia up with a fifteen second delayed suplex to cover for a two count.

Bestia gets a tag to ‘Wolf, and the tag team actions swings back to La Rebelion, as they attempt he Total Rebelion on The Ambassador but Williams wriggles out.  La Rebelion go for a Superkick Fiesta (because it’s not exclusive to The Young Bucks).  Williams rolls out of the ring, but MechaWolf is in pursuit and  flies to the outside with a tope suicida to crash into him on the guardrails.  Bestia attempts to follow suit, but Smith is in the ring and catches him to deliver the running powerslam to cover for the one, two, and three.

Your Winners via Pinfall:  The Commonwealth Connection

Williams and Smith celebrate with the Knoxville fans after their successful tag defense as the show goes to credits.

A more action packed episode,  tu the matches were a bit on the short side.  The tag match had the potential to go longer, but it was still solid because ( say it with me)…Lucha Rules!

Lots of other questions on this sho abounded like:  are Max and Green a tag team going forward?  What game is Stevens now playing at?  And just what in the blue hell is going on the little that is left of Sal’s mind?

Let’s hope we can address that next week,