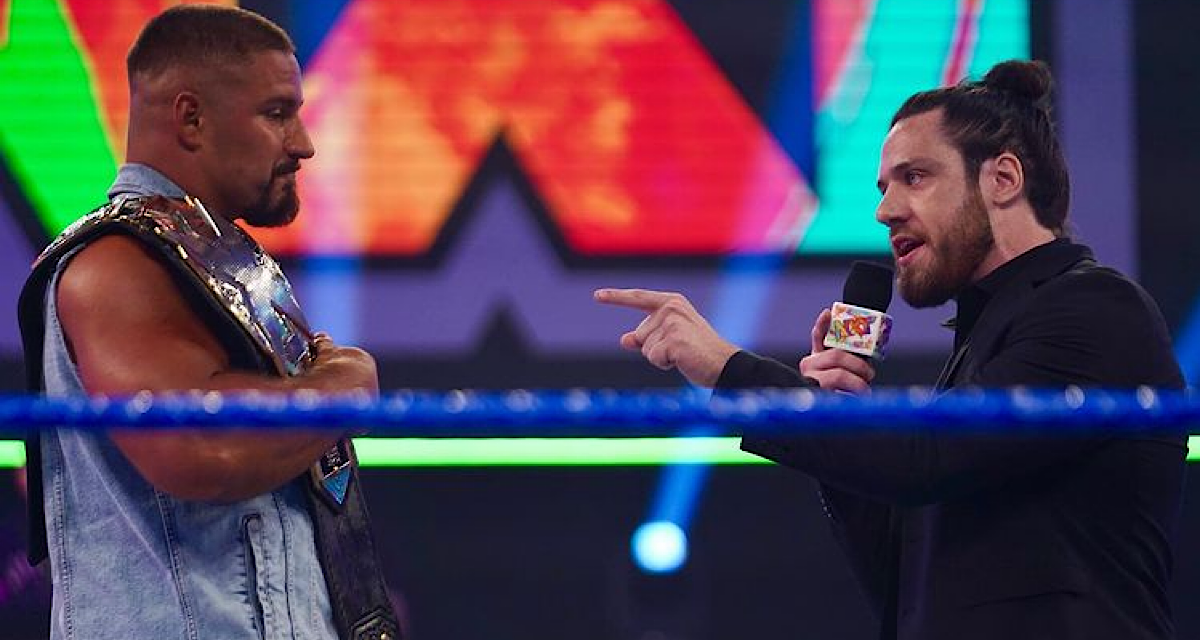 The Great American Bash is next Tuesday, headlined by NXT Champion Bron Breakker defending against challenger Cameron Grimes. The two highlighted tonight’s episode with an excellent verbal exchange that concluded with Grimes injuring the champion. But the remainder of the Great American Bash’s go-home show was blander than well-done grill meat.

The winners of tonight’s opening bout face Toxic Attraction at Great American Bash for the NXT Women’s Tag Team Championships, which have been hoarded by Jacy Jayne and Gigi Dolin for ages. While neither challengers can believably save NXT’s insufficient division, underdogs Jade and Perez have a strong fanbase to carry them to the straps. After trading twists and flips, the former team stands tall heading into picture-in-picture as Toxic Attraction watches on from the Toxic Lounge. Jade makes a comeback, and Perez hits Pop Rox for the pinfall victory in a match that really picked up in the latter half.

Joe Gacy and The Dyad approach the Creed Brothers in the Diamond Mine training center, but the NXT Tag Team Champions turn down their admittance offer. Roderick Strong chimes in to reinforce Diamond Mine’s bond and accepts Gacy’s challenge for tonight.

Toxic Attraction is interviewed backstage, and they aren’t impressed by Cora Jade and Roxanne Perez. Nikkita Lyons steps in and up to Mandy Rose, who also issues a challenge. Who’s the general manager around here?

The new NXT UK Tag Team Champion Brooks Jensen and Josh Briggs enter the ring with Fallon Henley to “you deserve it” and “USA” chants. Their celebration is interrupted by Pretty Deadly, who say that the legitimately “gorgeous” belts have been “spoiled by the grubby hands of American trailer trash.” The champs throw a cheap shot and ultimately throw the Brits back to the floor.

A package highlights the dominance of NXT Champion Bron Breakker, who will come face-to-face with Cameron Grimes later tonight.

A defeated Kayden Carter and Katana Chance cause a scene in the locker room after losing the opening match – not on the floor throwing a tantrum, at least. Tatum Paxley makes a smug remark and walks away.

James’ theme song goes way too hard for her accounting gimmick, by the way. She gains control in the opening goings and avoids Hartwell’s springboard elbow, utilizing the ropes for the dirty pinfall victory. “Ref, you suck” chants accompany the post-match celebration.

Last night, Tony D’Angelo and Channing “Stacks” Lorenzo threw Troy “Two Dimes” Donovan into a lake to sleep with the fishes. With Donovan being legitimately released, this is probably the most insane write-off ever, and it’s perfect.

Wes Lee responds to last week’s interruption by Trick Williams, saying, “Nothing will stop me from finding my inner peace in that ring.” They’ll go one-on-one at Great American Bash.

Diamond Mine vs Joe Gacy and The Dyad

Ivy Nile and Damon Kemp are ringside as Roderick Strong begins against Gacy. Brutus and Julius Creed toss around Dyad One, who makes a comeback after Gacy spews some words of encouragement. Diamond Mine pops the crowd with a triple suplex before picture-in-picture, but Gacy recuperates over Brutus with “psychological terror” – similar to what watching two wrestlers in velvet cloaks is like. Julius receives the hot tag, but Strong steals his spotlight as dissension commences. The Dyads capitalize off the scuffling by pinning Strong with their double-team finish. Let’s get this Diamond Mine split over with and free Roddy already.

Winners: Joe Gacy and The Dyad

Lash Legend announces that Alba Fyre has been “put on the shelf permanently.” If only Legend’s in-ring work matched her talking game.

Quinn blindsides Sanga at the entranceway, and a pull-apart brawl begins before break. The match officially starts afterwards, where Sanga debuts some new, basic black ring gear that exposes a lot more than usual. The match is slow, methodical, and sluggish before Sanga thankfully ends it with a chokeslam. Quinn has never had a standout match, but this one was outstandingly tough to watch.

A package recaps the last few weeks for Cameron Grimes, where the challenger for the NXT Championship has become blander than ever.

WWE’s production crew is everywhere, and they’re supposedly inside of Wendy Choo’s dreams. “I get under your skin, I go for the pin, and then I win,” Choo tells rival Tiffany Stratton.

With Jacy Jayne and Gigi Dolin ringside, Toxic Attraction gets more screen time than all other NXT champions combined. Rose takes control during commercial break, but Lyons makes the comeback shortly after. Jayne and Dolin blatantly interfere to end the match, continuing the assault until Roxanne Perez and Cora Jade run in.

Apollo Crews gives reassurance to Solo Sikoa before Xyon Quinn steps in to gloat. “When I look at your future, it don’t look too good,” Crews tells Quinn. Afterwards, another dark vignette plays for JD McDonagh – the former Jordan Devlin.

Wade Barrett is in-ring to introduce Cameron Grimes, who debuts a petty new entrance theme that replaces Josiah Williams on vocals. Next arrives the NXT Champion Bron Breakker to begin the face-to-face mic exchange. Grimes actually cuts some great lines dissing Breakker’s failed football career and silver-platter wrestling future. Breakker comes back with intensity, but Grimes ultimately wins the battle bringing Rick Steiner’s name into the mix. The two get physical, and Grimes throws Breakker into the turnbuckles, breaking the ropes. To an injured champion, Grimes says, “At 100 percent, maybe I can’t beat you. But it looks like you’re not 100 percent, Bron.”

Both Grimes and Breakker came out with hard-hitting verbal shots that almost made tonight’s episode okay. But with awful wrestling and extremely cheesy, overproduced segments, this was rough to get through.