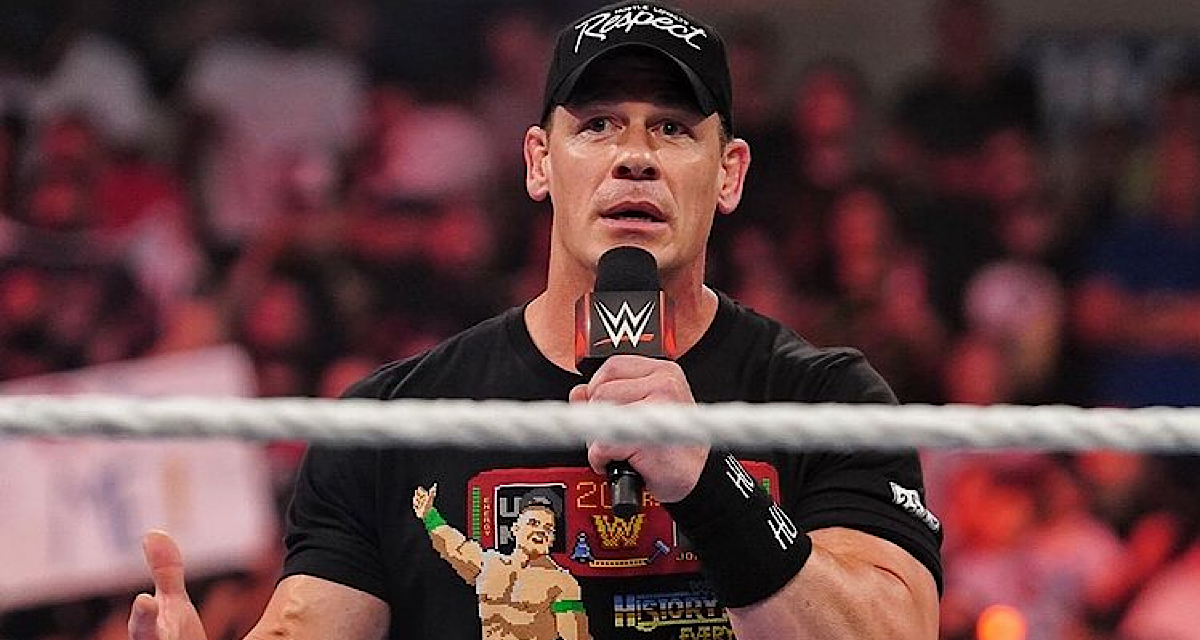 Footage of John Cena walking through a hallway of applauding peers opened this week’s episode – “a night 20 years in the making.” Countless clips and montages celebrated the illustrious 20-year career of the returning real-life superhero, which included shout-out videos from the likes of Randy Orton, Chris Jericho, and plenty other legends.

But the reception Cena received in-ring from Laredo, Texas proves that he’s one of the greatest to ever do it, with a hearty promo that elicited amazing responses. Despite his success, Cena’s gist was about togetherness and “us,” thanking his fans for 20 years and whatever’s next to come.

WWE’s midcard menagerie fills the ring before showtime as the winner takes a spot in the men’s Money in the Bank ladder match. Notable moments before break include the Mysterios eliminating Veer Mahan, and R-Truth having a dance with Shanky. Afterwards, AJ Styles eliminates Tommaso Ciampa, and the Mysterios are taken out by The Miz and Dolph Ziggler. Ricochet saves himself on a nearby ladder before eliminating T-BAR, and six remain after the second commercial. Shinsuke Nakamura eliminates Ziggler, Riddle eliminates the former, and an apparently injured Miz is attended to ringside. Styles takes out Ricochet, but when attempting the Phenomenal Forearm, Miz pulls him down and out. Fighting atop the apron, Riddle finally catches Miz with an RKO to win tonight’s opener and head to Money in the Bank. Riddle’s gaining momentum, and Laredo responded loud and positively.

The Street Profits are backstage with John Cena to ask for some advice. After doubting themselves and their championship matchup against the Usos, Cena instills the age-old motto of never giving up. Later, Shawn Michaels, Big Show, Booker T, Daniel Bryan, Trish Stratus, and Triple H sing his well-deserved praises in a series of clips.

“Randy, I love you – and that win was for you, my brochaco,” Riddle says in an interview. Commentary notes that Riddle is “riding high,” and he most certainly is.

Angelo Dawkins and Jimmy Uso are at opposing corners preceding the Street Profits versus Usos title match at Money in the Bank. Ford makes a comeback after taking Jey’s offense throughout break, and both competitors trade nearfalls. Dawkins runs through Jimmy, Jey dives onto the former, and Ford returns the favor before hitting his absolutely unreal top-rope splash for victory.

Finn Balor and Damian Priest remind the Mysterios that Rey, too, is celebrating 20 years in WWE. They insinuate that Dominik’s career shortcomings are because of Rey’s poor fathership, and while they may be rude, the Judgment Day looks really cool.

The Miz joins Kevin Patrick in-ring to discuss the inevitable return of Logan Paul, who will compete at SummerSlam. Miz reprimands Paul for leeching off of his notoriety (although it’s really the inverse) before moving onto AJ Styles, who wastes no time in throwing a right.

The Miz vs AJ Styles

The feud ignited by Styles calling Miz’ balls tiny continues, as Corey Graves on commentary insists that they’re actually pretty girthy. Styles makes a comeback after break and hits an Ushigoroshi for two, and Miz recuperates with an innovative Codebreaker. Props to Miz for trying to reinvigorate his playbook – hitting a Busaiku knee of note, but everything this man does is hilariously awkward. Styles hits a brainbuster, which makes Miz retreat for a count-out loss in a nevertheless solid bout.

John Cena at last meets Ezekial – Elias’ younger brother, who had a consecutive WrestleMania feud with the former. “Never forget who you really are,” Cena advises him. He turns around to find United States Champion Theory, who talks some smack to plant the seeds. Afterwards, Kurt Angle, Randy Orton, JBL, Chris Jericho, Stephanie McMahon, and Steve Austin take their turns at congratulating the man himself.

RAW Women’s Champion Bianca Belair comes face-to-face with challenger Carmella, who attempts a cheapshot but fails. Belair stands talls against Carmella, who never had a believable shot – especially not after this.

Alexa Bliss and Liv Morgan exchange ingenuine lines about remaining friends while simultaneously competing in the women’s Money in the Bank ladder match. That doll Bliss carries around is a cash grab as blatant as Disney. Coincidentally, Bliss herself is an infamous “Disney adult.”

RAW’s number one announcer Asuka joins the booth, which is presumably making the big man backstage crack up. The match is an afterthought as Corey Graves and Byron Saxton try asking Asuka questions about the Money in the Bank ladder match as she responds in Japanese. Morgan gets the roll-up victory, and Bliss laughs it off. But nobody is laughing at the overplayed foreign jokes that are older than Vince McMahon.

Speaking of the devil, Vince McMahon is in-ring to introduce John Cena to a “well deserved, absolutely deafening” hero’s welcome. Cena turns the tables, thanking the extremely receptive audience for the past two decades of his career. He hammers home the sentiment that it’s about “us” in everything that the man, the myth, the legend does. The segment goes uninterrupted, and the emotion that Cena evoked from Laredo proved that he’s still one of the greatest to ever do it.

Not only is Lashley handicapped against both Otis and Chad Gable, but United States Champion Theory is the bout’s special enforcer. The square of a human in Otis works the opposition down while Theory’s ringside selfies are somehow AirDropped to the titantron; WWE’s production quality is impressive, it really is. Alpha Academy delivers a powerbomb-moonsault combo for two, and Lashley applies the Hurt Lock on Gable for victory. Theory initiates a post-match beatdown alongside Alpha Academy, but Lashley fights all three off.

A package replays Cody Rhodes versus Seth “Freakin” Rollins inside Hell in a Cell, where the “American Nightmare” gained the victory with a completely torn pec. At a rehabilitation center in Atlanta, cameras caught up with Rhodes, who previews the Money in the Bank ladder match that he would’ve aimed for. “I’m not rooting for anybody, but if Seth takes the win, I think I’d be the first to congratulate him,” he says slyly. As per usual, Rhodes is a natural orator, but that neck tattoo is even more distracting in the tank top he had donned.

Back in Laredo, Rollins approaches John Cena while laughing to the tune of his entrance theme. He contrasts Cena’s failed cash-in to the historic “heist of the century” before fellow Money in the Bank competitor Omos looms from behind. “Good luck,” Cena says as he smartly retreats.

Becky Lynch vs Doudrop vs Nikki A.S.H. vs Shayna Baszler vs Tamina vs Xia Li

Tonight’s main event is a five-women elimination match to determine the final entrant into the women’s Money in the Bank match, and the crowd is distractingly quiet. Lynch gets a pinfall over Li and taps out A.S.H to short bursts of approval before commercial. Doudrop delivers the Tower of Doom – inevitable in any multi-women match – before splashing Baszler for three; and from there, the winner of the matchup is a given, as if it wasn’t uninteresting enough. Doudrop eliminates Tamina, and with an avalanche Uranage, Lynch heads to Money in the Bank.

I haven’t watched RAW in forever, but that had to have been the worst main event in recent memory. Lynch was obviously winning, and to put people like Li and A.S.H in the closing match was already a misstep; I mean, there were crickets out there. Nevertheless, tonight’s episode was defined by Cena, which made it all worth the while. I was legitimately tearing up.