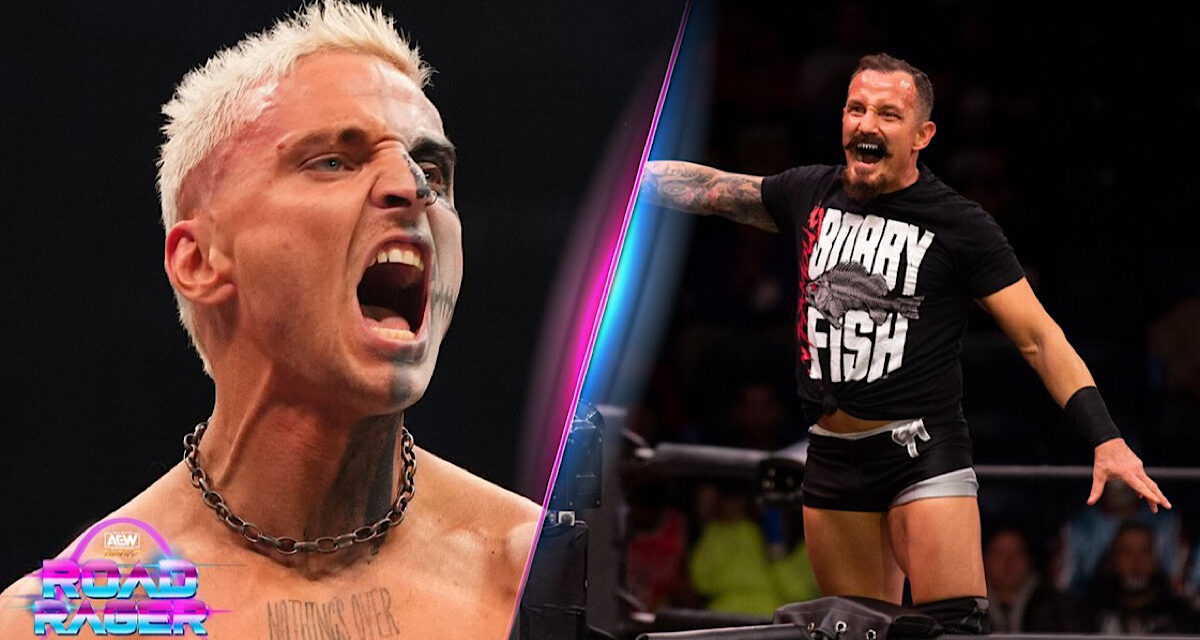 It’s Friday night, and you know what that means?  No, not to step down as chairman board chairman board, or get an investigation going.  It’s time for AEW Rampage, and it’s a huge night, where the feud between reDragon’s Bobby Fish escalates against Darby Allin in competition tonight, and Allin is looking for blood after Kyle O’Reilly attacked Sting and Pillmanized his leg.  Can Allin avenge his mentor, or is Fish’s win undisputed?

We’ll find out tonight, as we come to you from the Chaifetz Arena in St. Louis, MO.  Excalibur, Taz, Chris Jericho have the call, and His Lordship, William Regal is sitting at commentary for the First Match of the night…

Regal calls Jericho a “trout slapper” during the introductions, and I did a Google search what it meant (I’m not telling you what it means.  Go look for yourself.)  But as the match gets underway, Mox is more focused on the sweet science of the mat but it isn’t long before Martin gets into aerial attack mode.  Mox ups the violence during Picture in Picture, slamming Martin into the steel steps on the outside of the ring

Back in the ring, Moxley locks a Texas cloverleaf then goes to a modified STF to Martin.  He drives a running knee to cover Martin for a two count.  Martin gets a flipping huracanrana in the corner that barely gets Moxley, but the Wild Thing comes back with a butterfly superplex.  Martin goes back on attack with an aerial assault to outside, followed by a crossbody in ring to Moxley for a two count.  Martin attempts the NoseDive, but Moxley evades to a sleeper hold, and Martin backs up to the top turnbuckle and turns it into Sliced Bread #2 for a two count.  Mickey is done screwing around and  lands a lariat.  He then hits the hammer and anvil elbows to Martin and then a unique hammerlock sleeper hold and His Lordship declares, “Thank you and good night.”

Submission victory for @JonMoxley in our opening bout here on #AEWRampage: #RoadRager! Tune in to @tntdrama right now! pic.twitter.com/8LDIyoxLGl

Backstage, Tony Schiavone is with Keith Lee and Swerve Strickland, and Lee is sore about the battle royale for the AEW Interim title where he was tossed out of the ring by Strickland.  He tries to plead case saying it was just competition and he took the opportunity for a title shot.  Soon, Ricky Starks and Powerhouse Hobbs come in to state they aren’t on the same page as a tag team, unlike them.  A gauntlet thrown down, methinks?  Also, trouble with Lee and Strickland seems on the horizon.

A House of Black /Death Triangle video package ensures they ain’t done anytime soon, and more violence is in the forecast.

#DeathTriangle’s @PENTAELZEROM faces archenemy @malakaiblxck once again, this time in singles action, in an All-Atlantic Championship Qualifier this WEDNESDAY on #AEWDynamite!

Tune in NOW to #AEWRampage on TNT! pic.twitter.com/MW7axJD3oi

And now for a match *somebody* wanted, it’s…

As  God as my witness, I still will never get use to hearing, “Scissor me, Daddy Ass!”  But since my Squashy Sense is tingling, it’s time for a Haiku Recap…

Scissor up for short work.

Your Winners via Pinfall:  The Acclaimed and The Gunn Club

Lexi Nair is backstagebwith Hook about facing a top prospect from New Japan.  Hook is his usually verbose self (note the sarcasm, folks) when Danhausen comes more talkative than his tag partner.  He promises that they will face their opponents and then they will destroy and eviserate, but Hook says he has this.

Now for a title match for the…

Jericho gives the “coveted” Sports Entertainer of the Week to Cargill during the introductions.  Nightingale gives good offense to the champ early on, but a mistimed Pounce allows Cargill to kick her out of the ring, and Hogan lays on the boots from the outside.  During Picture in Picture, Cargill is all business against Nightingale, who reverses and Irish whip to guardrails.  Back in the ring, Cargill is still in the drivers seat but Nightingale fires back with chops and a clothesline in the corner.  Up top, Nightingale gets missile dropkick for two count, and …

Ads (Author’s Conspiracy Theory:  this seems to happen more in the women’s match than anywhere else on the show.  Kinda feels like they don’t want to show a women match in it’s entirety.  I hope that not the case but still… one wonders.)

Back to the match, Nightingale lands with a cannonball in the corner to cover for a two count, but the Head Baddie kicks into gear with a Pedigree and then follows up with a chicken wing facebuster for the pin and the win.

After the match, Hogan and Cargill put to boots to Nightingale, but Athena and Kris Statlander get in the ring to make the save and send The Baddies running.  Oh yeah, this feud is starting to heat up, and it looks bad for the Baddies

we go to Jay Lethal, Sanjay Dutt, and Satnam Singh with a video package talking about laying the hurt on Samoa Joe.

After an impressive debut last week on #AEWRampage, @thelethaljay & @hellosatnam claim they consistently put in the work unlike nemesis & #ROH TV Champion @samoajoe.

Tune in NOW to #AEWRampage on TNT! pic.twitter.com/2Jvmb3laiq

Mark Henry is with a Darby Allin and Bobby Fish for the final words.  Allin says O’Reilly took out Sting, a person he respected.  So Allin feels it’s fair to go after Fish and take him out.  O’Reilly says he’d do it again to Sting if he had the chance, and Fish says it’s not a good idea to face him in the ring.  Allin states it’s not a wrestling match; he’s going to take him out once and for all.

Well, says Henry, that’s been enough talk.  Because (sing it with me) it’s time for the Main Event…

During the ring introductions, Allin poses on the top turnbuckle and Fish kicks him  off ring ropes to start the match.  Fish hits with a dragon screw leg whip, and he dissects Allin like third period biology with a frog cadaver.  The match goes all over, as Allin hits with a slingshot splash to outside on Fish, but Fish comes back wih a tilt-a-whirl backbreaker.  Allin returns back with a tope suicida that throws him and Fish to the guardrails.  Fish kicks out legs of Allin again, and delivers another dragon screw leg whip to slow him down further.

During Picture in Picture, Fish kept up the offense with a slingshot somersault senton to a sliding clothesline.  Fish gets cocky and poses on the outside of the ring and that gives time for Allin to lock in a sleeper hold,but Fish staves off the attack and comes back with a snap suplex.  He goes to the well once too often and that allows Allin to reverse it midair into a Scorpion Death Drop, and goes to coffin splashes.

In the corner, Fish tried to lock on a sleeper of his own but Allin goes to a Code Red for a two count.  Allin abandons all care and goes for a Coffin Drop to the outside that lays out both men.  Back in the ring, Fish spears to outside and both men tumble to the floor, and Fish throws him into steel steps.  On the ring apron, Fish goes for an ankle lock on the ring apron to Allin and he gets a snap German suplex to apron with a thud to the floor.

German Suplex to the hardest part of the ring by @TheBobbyFish! It’s #AEWRampage: #RoadRager on @tntdrama! pic.twitter.com/xVHseSrUxV

Fish goes up top with an avalanche Falcon Arrow to cover, but only gets a two count.  Fish transitions to an ankle lock, but Allin reverses to the Last Supper for a pinning situation that gets him the one, two, and three.

Your Winner via Pinfall: Darby Allin

After the match, Fish attacks Allin, and now his reDragon  partner Kyle O’Reilly comes down to the ring with a chair. But the lights go out, and when they come on…

It’s Sting! He lays out O’Reilly for the attack tI his leg, and Allin laid out Fish and wrapped his leg around a chair, drilling the leg with a coffin drop off the top rope.  Sting and Allin stand triumphant in the ring as the show fades to back.

More of a solid show which is the norm for the Rampage shows these days.  Nothing too crazy (unless you don’t count Allin’s insane offense), but it runs at a brisk pace.  The feud with Cargill looks to amp up some more with Athena and Statlander, and I hope they keep building to that.