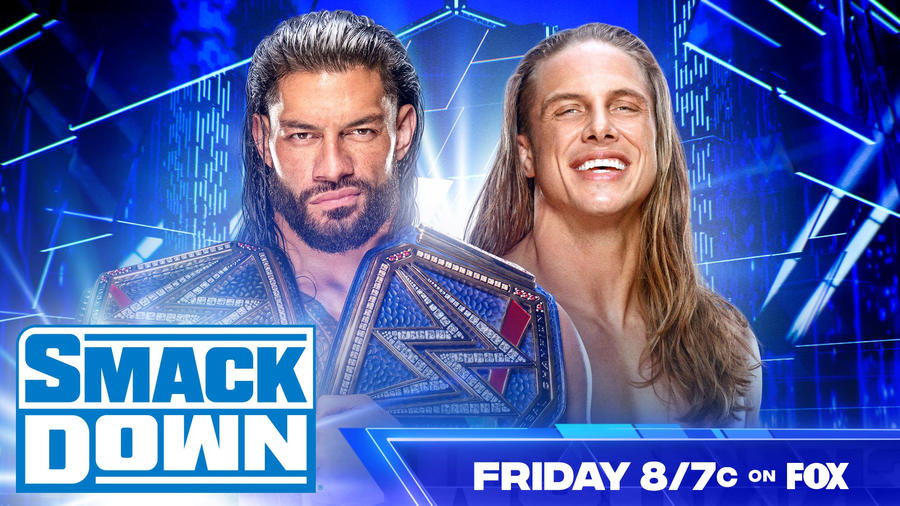 Vince McMahon has arrived to SmackDown with some words to share. His voice is still as deep as I remember. I jolted a bit after he started speaking. Ha! McMahon was here to welcome Minnesota to WWE. That’s it? That’s all? Ooookay.

Riddle enters SmackDown with his usual theme song going “bro” again. I don’t know why it bothers me so much. It just sounds like a stoned drunk. Surprisingly though, I still like him.

Riddle has the powerful essence. That “Wow” factor. He dedicates his upcoming match to Randy Orton by playing his iconic song. I missed that sound.

On the other side of the rivalry spectrum, the Happy Family is no more. Madcap Moss is going to face his mentor, Nappy Corbin… oops, Happy Corbin. Who cares about his name really? He’s had a far worse identity crisis than Yoshi from the Mario Kart world.

Madcap starts the match with some great athleticism by avoiding Corbin’s offence. The quickness of his feet. Astounding.

Moss whips Corbin into the turnbuckles as Happy violently hits his head. He returns fire with a fallaway slam to Corbin’s back. That pissed off The “Bald Wolf” so he dodges Moss by sending him crashing against the ring post.

Corbin slides out of the ring to punch Madcap past the barricades.

Corbin returns into the ring before the count out and Moss inflicts two ‘Punchline’ moves onto Happy’s neck for the win. Moss has the last laugh as he rightfully deserves.

Am I the only who thinks Happy wasn’t really in it? He lacked during this match, really bad.

Shockingly, Happy Corbin has something to say. He takes it out on Pat McAfee for criticism towards his highs and lows. Does McAfee have a new rival? He encouraged Minneapolis to laugh Corbin out of the stadium as it is intended. Even Kofi Kingston and Xavier Woods were giggling at Corbin as they came to the ring.

The Street Profits challenge the Usos for their “babies” back, which I can only assume are the tag championships.

Oh, by the way, Nattie looks happy. She’s going to beat some respect into Ronda Rousey at Money in the Bank for the SmackDown Woman’s Championship. Her Sharpshooter submission move has broken muscles and spirits for years now. I did say she was making a comeback. I do like the sound of cracking bones. Sorry for my sadistic comment, folks, but it’s true.

Tinder… my bad, Jinder beats Woods in the corner of the ring before getting a double slamming by Xavier and Kofi.

Pat McAfee and Michael Cole believe that Mahal and Shanky could be a formidable tag team if Jinder learned to have fun during matches, which is something New Day does, he wouldn’t rag on Shanky for randomly parading  around.

Shanky delivers two close lines to Kofi’s neck but the most oddest thing happened. Xavier starts blowing his trumpet and Shanky began dancing to it. He’s distracted so Kingston gets the win.

Because of the wackiest fight I’ve ever seen between Sheamus and Drew McIntyre last week none of them were able to qualify for Money in the Bank. It was bonkers. I laughed so hard.

Adam Pearce has a big decision to make on who is going to the big show. Sheamus and McIntyre will both be in the match.

Backstage, Kayla Braxton catches Sami Zayn to verbally trample him on his loss last week. Because of it, Roman is obliged to defined his titles against Riddle. He says there’s no hostilities between them because he’s an honorary Usu. Still, I wanted Zayn to enter Reigns’ change room to get his ass roasted.

Who will be next to join qualifiers such as Alexa Bliss, Liv Morgan and Lacey Evans? Let’s see.

Rodriguez starts by spearing Shayna into the turnbuckles and continues target her abdomen and back.

Shayna fights back by taking out the power in Raquel’s legs. Rodriguez regains her strength to put Baszler down as she smacks her on the mat for the win.

Raquel Rodriguez now qualifies as a contender and that leaves three more available spots. Aliyah and Shotzi go up against each other next week.

You know, I actually forget Max Dupri was coming to SmackDown. When he didn’t show up in the ring to introduce his Maximum Male Models I thought to myself that must be the heavens answering my prayers yet he was seen backstage right up in Adam Pearce’s face. Again.

He didn’t agree with the light show Pearce put up, it wasn’t enough for Dupri, so he won’t reveal anyone tonight. But that means there’s still next week. Crap!

Riddle takes the fight to Roman with multiple kicks to his mid-section. He thought he was on fire until Reigns smacks Riddle in the face.

After being pushed into a corner, Riddle suplexes Roman on his back, allowing the champ to roll out of the ring. Riddle follows and kicks Roman in the face and jumps onto him as he lays on the floor.

Roman then rains down punches on Riddle’s head.

They slap each other repeatedly until Roman stops it by blistering Riddle in the jaw.

Riddle later goes for an ‘RKO’ but Roman blocks it from happening.

Riddle prepares himself to soar from the second rope but the champ shocks all of us by spearing his challenger into mid-air for the win. Paul Heyman was definitely at the verge of fainting. His expression was that of an an unglazed donut.

Because Reigns destroyed everyone, he’s going to leave. Let’s be honest, love him or hate him, it was good to see Roman at work. But… guess who makes an unexpected entrance?

Brock Lesnar! I thought he was going to issue another opportunity, instead, he attempts to shake hands with our champ. “Careful now, that’s a trap.” I said, and it was.

Leanar attacks both Roman and the Usos but not to claim the titles. Just to make the point that he’s still here.