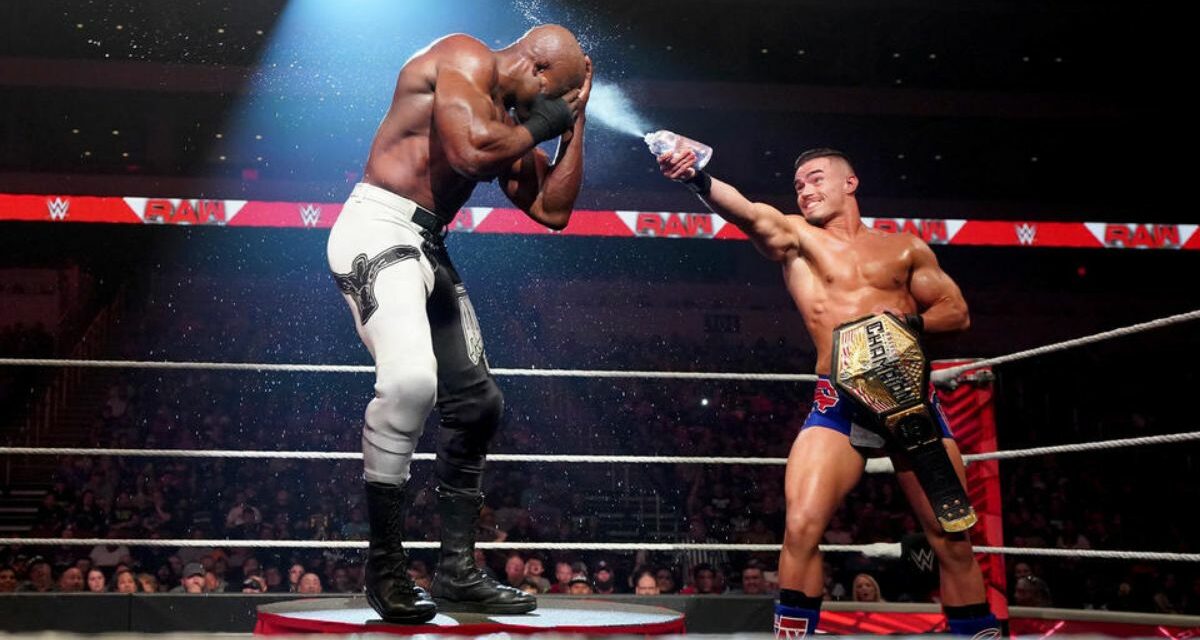 Riddle interrupts the proceedings to insult Heyman and squeeze what little life there was left from last week’s joke about the Miz’s balls before Heyman drops a bit of news: he tells Riddle that this will be his only shot against Reigns for the title. After that, Jimmy and Jey Uso head to the ring, presumably on Reigns’ orders. Fortunately for Riddle, Angelo Dawkins and Montez Ford follow soon afterwards, so you must be thinking what I’m thinking: a Teddy Long special, 6-Man tag team match!

Well, if you are then we’re both wrong.

Someone near the front row holds up a picture of The Wild Samoans Afa and Sika as Ford hits a high dropkick on Jimmy, sending him tumbling to the floor. Jimmy returns to the ring after a breather and takes control with hard Irish whips into opposing corners as Corey Graves calls Reigns the most dominant WWE champ in decades, if not ever.  I’ll just let that one sink in.

Jimmy thinks he’s thrown Ford over the top rope to the floor, but instead they fight on the apron with Ford taking a suplex going into ads. Coming back, Ford is selling a sore back before the fight breaks down into fisticuffs and superkicks. A spinebuster by Ford nets a two-count, and a subsequent (and sloppy) Samoan Drop by Jimmy gets the same.

They fight on the apron again, with Ford falling backwards into the ringpost and Jimmy then flying forwards into the same, before another sloppy move — a hurricanrana by Ford — lets Montez try a top rope splash, but he lands on Jimmy’s knees and that’s enough for the three.

Kevin Patrick has a feature, sit-down interview with Seth Rollins, who claims to have been genuine last week when he praised Cody Rhodes and his performance at Hell in a Cell. That doesn’t mean, though, that he didn’t still want to eradicate Rhodes from the WWE. Now he’s looking forward to getting into the Money in the Bank match, which means he’ll have to beat AJ Styles tonight.

As Rollins cackles, Styles arrives with a hard punch, saying it was for Cody.

Lynch jumps Brooke before the bell, and Jimmy Smith says we have to wait for the referee to start the match. Um, why? Pin anytime, anywhere, right?

Lynch knocks Brooke around and takes her out near the commentary’s table. Lynch grabs a mic and says her anger has nothing to do with the 24/7 Championship (she tells Brooke she can keep that), but it will help her focus on Money in the Bank.

She sets on Brooke again, but Asuka’s music gets her attention and those two start a scrap in the ring. With Brooke apparently knocked out at ringside, where’s the cavalcade of jabronis looking to pin her? Asuka gets the better of the fight.

Bliss and Nikki kick things off in tribute to their former best friend phase, but Doudrop is soon in, slamming and splashing Bliss at will. Nikki re-enters and enthusiastically pounds and chokes Bliss, but double tags change things up as Morgan tries a series of kicks and even hits a Codebreaker and missile dropkick.

Bliss comes back in with something of a front-facing Natural Selection on Doudrop for a two-count. Things break down as Morgan and Doudrop fight outside, leaving Bliss to spike Nikki with a DDT for the victory.

Owens opens hot with a superkick, cannonball, and top-rope swanton for a two-count. A spinebuster by Ezekiel evens the playing field, and he ends up on the floor with Owens in a fireman’s carry, slamming him into the stairs. Yes, it was totally an F-U/Attitude Adjustment, but the commentators didn’t say anything about it.

Back from a break, Ezekiel uses his knees to block a senton and throws Owens with an overhead slam. A high knee knocks Owens to the floor where he gets into an argument with the commentators over Ezekiel’s name and is counted out.

Ezekiel grabs a mic and says he’s not done with Owens, but right now he wants in on Money in the Bank. He says he reached out to Elias and that his older brother is coming to Raw next week.

MVP and Omos are in the ring promoting how Omos barely has to climb the ladder to win Money in the Bank — which is true. Right now, though, MVP has a match.

Alexander, wearing what looks like some of the New Day’s gear, drops MVP with a low dropkick, but a distraction by Omos allows MVP to hit a surprise clothesline and a Ballin’ Elbow for a mere one-count. Still, the Playmaker follows and that gets a three.

Backstage, we hear from AJ Styles who promises Seth that he still has a killer instinct. Elsewhere, Rollins responds by dedicating his victory tonight to Cody.

Both wrestlers comes out swinging, and just as Rollins seems to have the upper hand a high dropkick by Styles sends Seth to the floor. Styles follows him with a floor-bound flying forearm (I guess that makes it something less than phenomenal?). Soon, the tables are turned and Rollins knocks Styles out of the ring, then follows with a suicide dive that Styles oversells as he flies over the commentator’s table.

After a break, Styles wins a slugfest and tries to pin Rollins after a facebuster, but with Rollins’ left shoulder not quite on the mat, the ref won’t count. So, naturally, Rollins not-so-subtly wiggles into position so he can allow himself to be pinned and then kick out at the count of two. Sure, that makes sense.

Styles dodges a Curb Stomp and locks in a Calf Crusher instead, which Rollins escapes via the ropes. Styles kind of stutter-steps a Pele Kick, eventually getting one in. Styles reverses a buckle bomb into a suplex into the buckle instead, though he misses a follow-up Phenomenal Forearm and tweaks his left knee. Rollins escapes a Styles Clash and folds Styles up for the victory.

Maybe this could be a “Winner gets his first name back” match? With The Miz on commentary, Riddle starts with a pair of takedowns, but Ciampa powers out of an armbar before stomping on Riddle’s bare feet. Oh, I was wrong, The Miz is right now trying to squeeze out the very last bit of life from the joke about his balls.

Ciampa stomps on Riddle’s hand for good measure, but Matt starts using Randy Orton’s greatest hits again with a scoop slam and hangman’s DDT. Ciampa recovers and gets a big toe-lock on Riddle, nearly pinning him with a running knee.

Riddle escapes a Fairytale Ending attempt and follows with a Floating Bro, then an RKO to seal the deal.

Kevin Patrick has Bianca Belair in the ring, who is promising victory at Money in the Bank against Rhea Ripley. In response, The Judgment Day appears via video to spend more time explaining their treatment of Edge last week than Ripley does looking ahead to her title match against Belair.

Elsewhere, Sarah Schreiber catches up with Austin Theory to ask how he feels ahead of his posedown against Bobby Lashley later tonight. He feels very confident. Does this seem ridiculous to anyone else?

Gable opens by maneuvering Ali to the mat, but a hurricanrana and a pair of arm drags give Ali a moment to “Shoosh” Gable.  Gable runs Ali into the corner, and Mustafa’s head snaps back on the second buckle. Gable tries to end it with a moonsault, but Ali dodges and uses a tornado DDT to gain control. As Ali looks to climb to the top rope, Otis interrupts which allows Gable to use a German suplex to gain the victory.

It’s not pretty for Rey from the outset until Mahaan misses a high, leaping elbow drop.  That doesn’t slow him down much, though, as he runs Mysterio chest-first into the corner. Mahaan misses a corner charge, hitting the post and falling to the floor where he attacks Dominik. Returning to the ring, Rey soon finds himself in the cervical clutch and that’s all, folks.

Just checking the time — is the Austin Theory/Bobby Lashley bit really the Raw main event? Adam Pearce is in in the ring and calls this the Inaugural Theory Invitational Posedown, and that Theory has challenged Bobby Lashley (which is not how an invitational works, but never mind).

Pearce commentates us through the poses like the WBF is making a comeback, and we get to the end quickly (but not quickly enough) where the crowd votes Lashley as the winner and Theory sucker-punches Lashley when it’s all over.

A truly bizarre main-even segment for 2022 and a strange feeling that Raw was being used to promote a SmackDown match led to a forgettable episode. You can catch up on the Money in the Bank qualifiers in this review and not feel bad for missing this week’s three hour show.