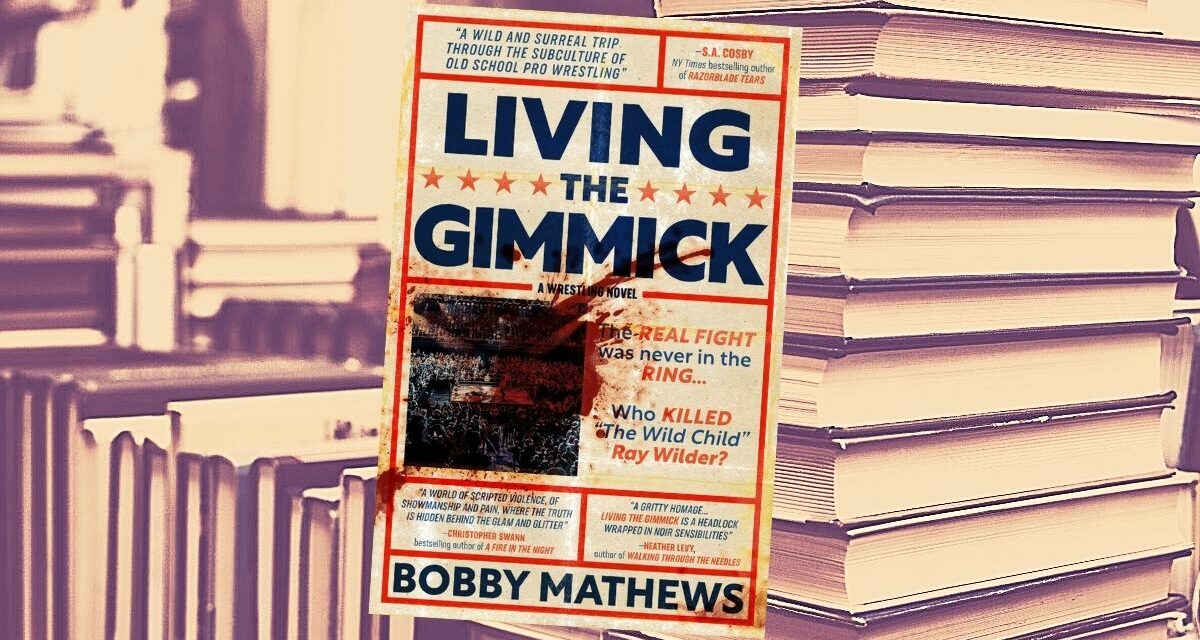 Rest in peace to Ray Wilder, who was gunned down in cold blood outside of a bar belonging to his former tag team partner and in-ring “enforcer,” Alex Donovan. The “Wild Child” Ray Wilder wore gold around his waist numerous times, as he wrestled through the territories of the American South, before finally making his way east with Malone Tomlinson’s UCW (Unlimited Championship Wrestling). Wilder was a generational talent, a wrestler crowds loved to hate, who men wanted to be, and women wanted to be with, who styled and profiled in and out of the squared circle throughout his four-decade career. In his untimely death, the Wild Child left behind droves of fans and admirers, and countless wrestlers who considered Wilder an influence and a mentor. RIP Wild Child.

Now, with all of that said, Wilder is the fictional creation of author Bobby Mathews, whose latest novel, Living the Gimmick, revolves around the murder of Ray Wilder, and his retired tag team partner’s attempt to solve it. Despite being killed-off in the first chapter, Wilder haunts the rest of the book, in both alternating flashback chapters as well as protagonist Alex Donovan’s pursuit for justice.

Living the Gimmick is a bloody, breakneck novel, set within the one-of-a-kind subculture of professional wrestling. It’s a work of fiction, despite the occasional “shoot” reference, but even for casual fans of wrestling, Mathews’ characters and events within the book will ring familiar, which makes it accessible to casual and non-wrestling fans but will be especially enjoyable to longtime fans of pro wrestling.

Mathews’ prose is taut. Some readers may even call it snug. His chapters are concise, and constantly moving forward, to the inevitable, violent climax, even when they’re looking back. The format of Living the Gimmick is short chapters that alternate between the present and the past. In the present chapters, Alex Donovan, Wilder’s retired “mechanic” whose violent tendencies aren’t as far in his past as he thinks, seeks to solve the murder of the Wild Child by traveling to Birmingham, Alabama, to interrogate the Wild Child’s current employer and co-workers in the nationally touring Unlimited Wrestling Championship. In the chapters that are set in the past, Donovan and Wilder engage in a series of brutal scenarios, in and out of the ring, for offenses as trivial as too firm of a handshake, which would each be worthy of their own episode of Dark Side of the Ring, and which result in a growing list of suspects in Wilder’s murder. “You know anybody pissed off at Ray?” asks one character of Donovan, and Donovan replies, “You want a list?”

Living the Gimmick is filled with the seedy lore of professional wrestling, but readers don’t have to worry about if it’s real or not, because it’s a work of fiction, so Mathews and his readers can just revel in the glorious violence he has orchestrated.

Mathews, a self-proclaimed “Alabama guy,” grew up 90 miles north of Panama City Beach, Florida. His wrestling love it legit. “Every Saturday afternoon at 5:30 p.m., the local CBS affiliate carried Southeastern (and later Continental) Championship Wrestling. I got to see the earliest appearances of Hulk Hogan (then going by the name of Sterling Golden and later Terry ‘The Hulk’ Boulder ), Brutus Beefcake (we knew him as Eddie Boulder, already riding Hogan’s coattails as Hulk’s pretend brother), Arn Anderson, the original Freebird, Michael ‘PS’ Hayes, Terry Gordy, and a ton of other up-and-coming stars who got their start in what was affectionately known behind the scenes as the Pensacola territory,” explained Mathews. 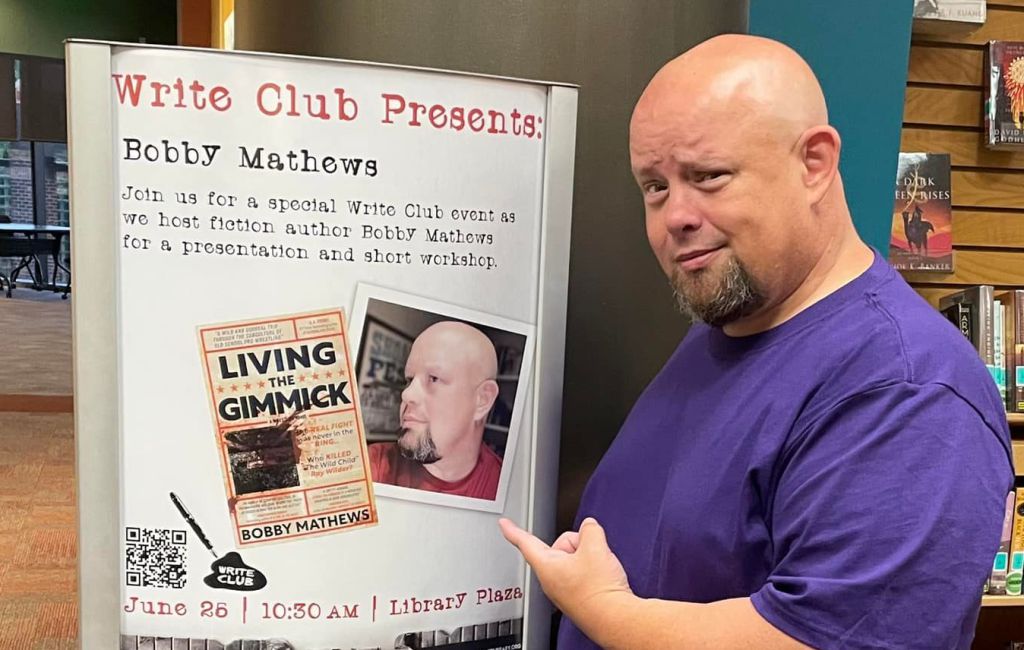 He also has written a lengthy, authoritative piece on the history of the Pensacola Territory.

As for a few wrestling matches Mathews said his readers should watch to best relate to the wrestlers, and wrestling, written about in Living the Gimmick, he suggests the Ric Flair vs.Terry Funk “I Quit” match from Clash of Champions 9 (November 1989). “To me,” Mathews said, “it’s a perfect story in a match.”

Then there’s Arn Anderson and Jerry Stubbs vs. The Tennessee Stud (Ron Fuller) and “Quick Draw” Rick McGraw, “a young Arn, plus one of the great underrated territory talents, Jerry Stubbs.”

And finally, Mathews suggests The Midnight Express (Condrey & Eaton) vs. the Fantastics, which again, features “perfect storytelling in an athletic, fun match.”

Mathews said that writing Living the Gimmick brought back a lot of the good feelings he had from watching wrestling with his dad. “As I wrote the book,” Mathews said, “I was thinking of a lot of things: How the wrestling business has changed from a very individualistic, performer-based show to a company-based ‘entertainment extravaganza.’”

Mathews says he still loves current professional wrestling, but he naturally leans more toward enjoying territory wrestling, which Mathews said “was a little bit like Evel Knievel, one guy doing the stunt work, taking the risks, and either succeeding or crashing and burning spectacularly.”

So when he set out to write Living the Gimmick, he had “a ton of marvelous territory wrestling history” in his memory. “I’d watched Southeastern/Continental and Georgia growing up, ended up watching Mid-South, World Class, and Jim Crockett Promotions when we finally got satellite TV, and even got into a little Memphis stuff by trading VHS tapes with other fans.”

So, needless to say, Mathews didn’t need to conduct much additional research to write Living the Gimmick. “I’ve been immersed in my love of wrestling for so long that a lot of the stuff I was reading and writing about was just out of love for what I saw and knew. I was absorbing stuff all the time, but it never really felt like research, you know?” Mathews said. “It all goes into the hopper, and it shakes around, and what comes out is what comes out. Research, experience, fandom, it all kind of came together for the writing of the book.”

While Living the Gimmick is a work of fiction, Mathews admits, “There are clearly similarities between my fictional characters and some real-life gimmicks.” For example, Mathews named the murder victim Ray Wilder as an homage to Ray Stevens, and the “Wild Child” nickname is purposely reminiscent of Ric Flair and other “Nature Boys” (Rogers, Landell, and Kirby) throughout the history of wrestling, and the way Mathews explains the book to wrestling fans is like this, “Imagine if Ric Flair were killed, and Arn Anderson had to bring the killer to justice.”

Despite Living the Gimmick being set deep within the insular world of professional wrestling, it’s not so much a wrestling book as it is a crime novel, which has its own rich history of influences which may not be familiar to fans of pro wrestling.

Mathews shared an influence. “Donald Westlake’s work is always an inspiration. Under the pen name Richard Stark, Westlake wrote a great series of novels about a master professional thief named Parker. I wanted that same kind of voice for Living the Gimmick, where the action is honed down and moves quickly, where you can feel the emotion behind a character’s motivations, but you don’t have to be continually weighted down with a ton of exposition. Westlake is number one on my list of all-time great writers, so he’s the bar to which I aspire (and will likely never reach).”

As for other non-literary influences, Mathews said that the song “You Think You Know Somebody” by folk singer Todd Snider ran through his mind a lot as he was writing, “Plus there was the ‘#MeToo’ movement, which definitely affected the way I wrote the book. If you’re a guy, you can experience a friendship/acquaintanceship with another guy in a certain way and think, ‘Oh, he’s a cool dude,’ but women’s experiences can be vastly different from yours, so I definitely wanted to explore that dichotomy and how sometimes abusers can get away with their actions for years without consequence.”

For his day job, Mathews writes about sports in suburban Birmingham. “I’ve written a couple of novels and a slew of short stories for a ton of outlets over the last couple of years,” Mathews said. In his spare time, he reads a lot and hangs out with his sons Noah and Spenser. He writes non-fiction for Pro Wrestling Stories, and eventually he may write about Ann Gunkel’s split with the NWA Georgia office back in the 1970s, because he thinks it’d make a great novel.

As for future projects, Mathews’ next novel Magic City Blues comes out in February 2023 (Shotgun Honey). Mathews described it as a murder-mystery set in Birmingham, “and it’s an homage in many ways to another of my favorite writers, Robert B. Parker.” He’s also the co-editor of the anthology Dirty South: High Crimes & Low Lives Below the Mason-Dixon Line, forthcoming in Summer 2023 from Down & Out Books. And he’s currently working on two other novels: “The Boys from Alabama, a novel about the revenge of a man rightly sent to prison but sent by the wrong man; and The Children Are Sleeping, a Southern gothic novel set against the backdrop of the deadly landfall of Hurricane Eloise along the Gulf Coast in 1976.”