Raw report: death, taxes, and brawling at a contract signing 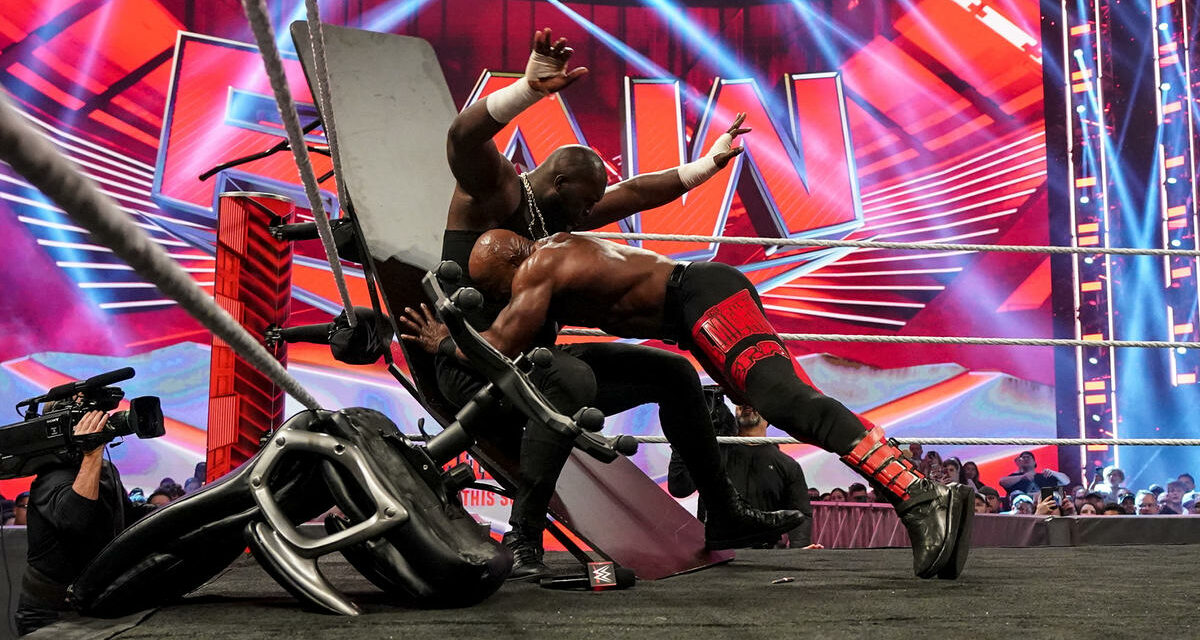 Before we get to our main event contract signing, Becky Lynch is happy to open the show by welcoming the audience to Monday Night Raw and admitting that she’s been timid to come out lately without her title. Now that she’s just a few days away from, in her opinion, winning her title back at Hell in a Cell this Sunday, she’s feeling pretty charged up.

She walks us back to May, 2020 when she gave up her Raw Women’s title and handed it over to the-then Money in the Bank winner Asuka. She claims that it was all part of a master plan to let Asuka hold on to the belt until she returned to take it back from her, but the plan fell apart because of Asuka’s entitlement and failure.

Speaking of the Empress, out she comes to tell Lynch to shut up and mocking her as a crybaby again. Belair is out next and, after a few choice words, practically teams up with Asuka as they chase Lynch from the ring ahead of their own encounter.

Lynch stays at ringside and joins the commentary team for the match as Belair and Asuka trade rest holds and acrobatic escapes until Asuka fells the champ with a kick to the gut. Belair won’t stop taunting Asuka with her butt-slap, but Asuka soon escapes a suplex, albeit awkwardly, before trapping Belair in an ankle lock, transitioning to a leglock. Bianca, however, powers Asuka up into a tall suplex. Lynch is in overdrive on commentary and is pretty entertaining.

After a break, Belair continues her power game, using a fallaway slam to send Asuka reeling, but she responds quickly with her flying rear end, but as she climbs to the top rope she spends too long trash-talking Lynch which allows Belair to interrupt her – although Asuka shoves away Belair’s superplex attempt and delivers a dropkick off the top anyway.

Moments later, Asuka elbows her way out of a KOD attack but seems to tweak her knee when she lands, which might have hampered her as she tries a cradle pin on Belair because the champ reverses it into her own pin for the victory.

Immediately after the bell, Lynch storms the ring and deals some damage to both women.

Rey and Gable open up with Mysterio taking a highly telegraphed shoulder block, and his son comes in and has no better success, suffering a couple of overhead suplexes. Everything breaks down as the babyfaces enter to dropkick Otis at will, but as Dominik celebrates on the ropes he’s attacked from behind by Gable going into a break.

Things haven’t improved for Dominik during the commercials, as we return to see him placed in a Sharpshooter by Owens. Rey flat-out interferes by entering the ring and dropkicking Owens to break up the submission. Otis tags in and misses his Vader Bomb, allowing double-tags so that Ezekiel and Gable square off. Owens and Otis enter the ring, as does Dominik as he attempts a cross-body onto Otis … and this is honestly a tornado match. I ask this unironically: where is the ref in all of this?

Owens accidentally superkicks Gable, which allows the Mysterios to tandem-619 before Ezekiel drops Chad with his Jackhammer-esque suplex slam for the victory.

Winners via pinfall: The Mysterios & Ezekiel 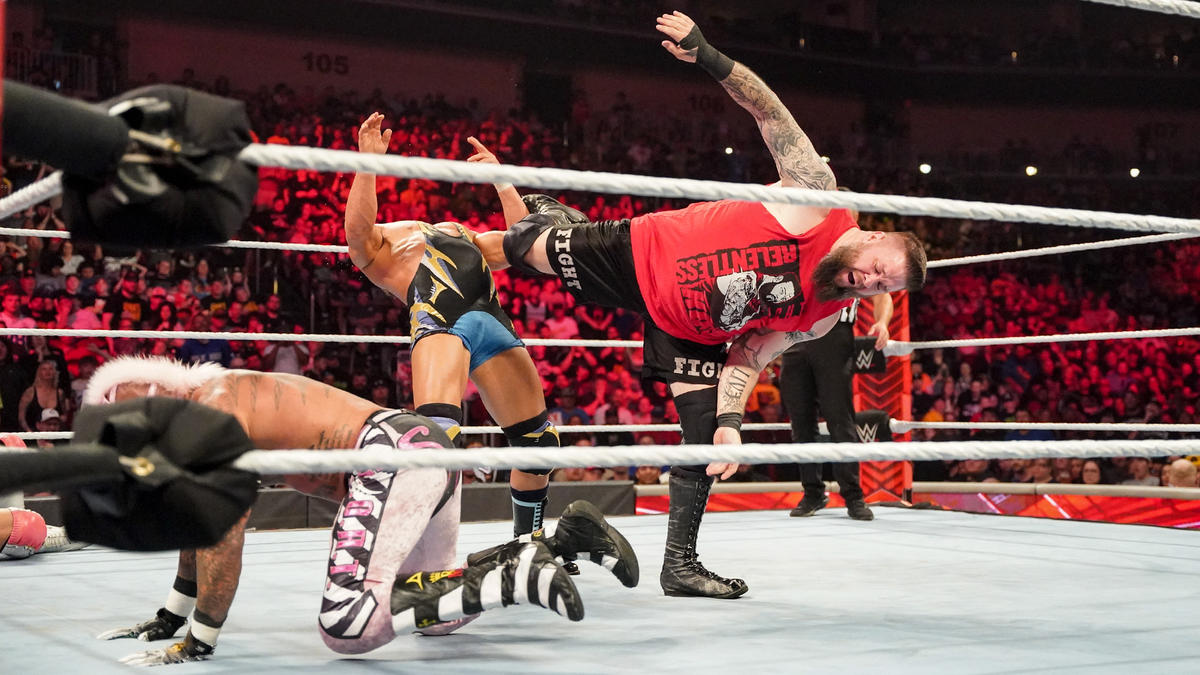 Cody Rhodes heads to the ring — but wait, I wasn’t ready for it! Where was the countdown? Rhodes looks back on hearing what his father Dusty had to say about Seth Rollins when the future Architect/Messiah was a newcomer to NXT.  Cody is looking forward to locking all of his respect and professional courtesy outside of the cage at Sunday’s Hell in a Cell and bringing the hurt inside the cell.

Not surprisingly, Rollins interrupts by making a sort-of Shield entrance, except he’s wearing an incredible silver sheen bathrobe-suit. He says he simply doesn’t like Cody, doesn’t like his pandering, and hates the Cody chants that keep getting louder and louder. He promises to end Cody in the cell and allow everyone to wake up from this American nightmare.

Rhodes invites Rollins to fight right now, but Seth, although he feigns agreement, stops short of getting in the ring and heads back up the stairs. Rhodes chases him down nonetheless and they brawl around ringside and among the crowd. Officials break up the fight, though not even Hurricane Helms, Curtis Axel, and more can keep them apart for long as they keep breaking free and scrap to the delight of the crowd.

Doudrop hits power move after power move, like a standing clothesline, but Bliss starts hitting and running, driving a knee into Doudrop’s jaw when she gets her down to her knees. Bliss dodges a senton and then a Vader Bomb, climbing the ropes for a Twisted Bliss that doesn’t look like it would hurt Doudrop at all but is apparently enough for a win.

It’s time for MizTV, which begins with the host promoting the upcoming premiere of Miz & Mrs before Angelo Dawkins and Montez Ford interrupt him. What happened to the Street Profits’ heel turn, by the way?  The Miz stands by uncharacteristically quiet as the Profits promote Hell in a Cell matches. Finally Miz flips out and things get weirder as Tozawa chases 24/7 Champion Dana Brooke into the ring. A whole bunch of downtrodden wrestlers rush the ring, and it ends with two title changes: Tamina beats Brooke, then Tozawa pins Tamina.

Tomasso Ciampa VS. Mustafa Ali – A future United States Championship opportunity for Ali on the line

Austin Theory is at ringside on commentary, as Ciampa hits Ali with tough knee strikes and driving elbows before turning Ali over with a clothesline. A headbutt leaves Ali dazed, but he neatly flips over a charging Ciampa, sends him over the top rope and hits a dangerous-looking suicide dive. As Ali looks to get back in the ring, Theory attacks him and ends the match.

Theory beats on Ali before grabbing a mic and saying that Mustafa gets his title shot right now.

Ali can barely stand at the bell, and he’s soon set flying with a high back body drop. Ali fights back with a superkick and a tornado DDT, but he climbs the ropes and is grabbed by Theory for his A-Town Down finisher and the quick win.

Adam Pearce pops out afterwards to tell Theory to pause the selfie celebration as he should have checked his text messages. Vince McMahon was impressed by his trickery, but he’s booked another title match between Theory and Ali for Sunday. 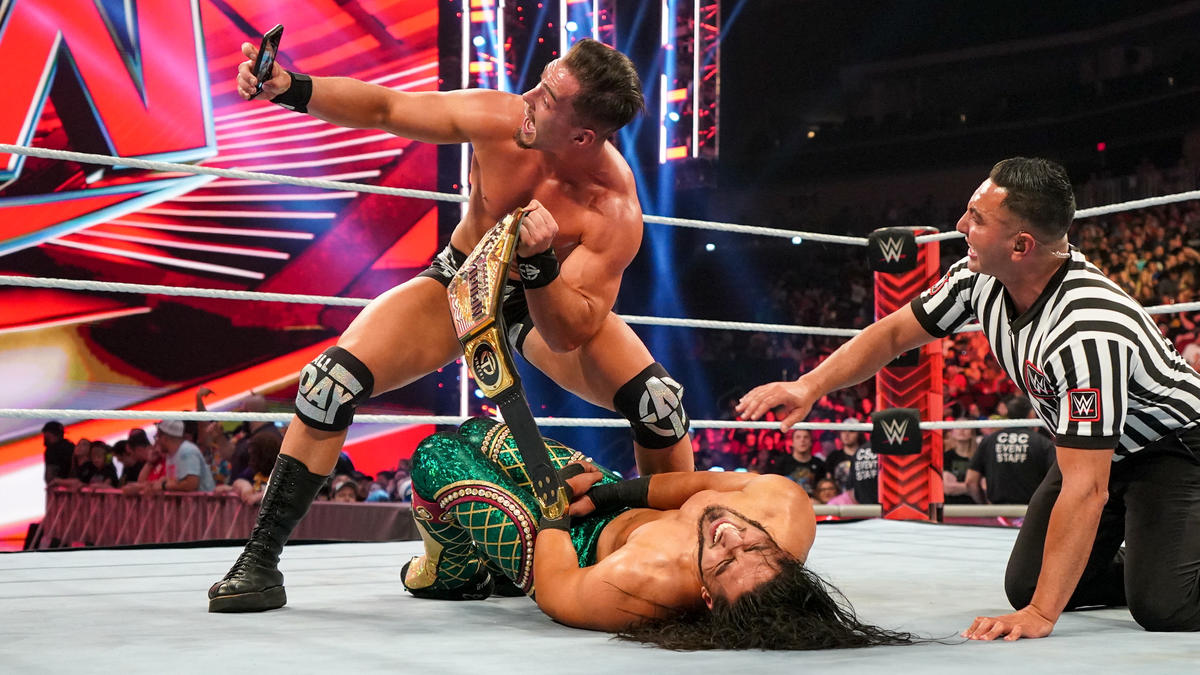 The ref is definitely pretending to not photobomb the selfie. Photo: WWE

Backstage, Matt Riddle thanks everyone for their well-wishes for Randy Orton, standing beside his fellow “Ronan” Shinsuke Nakamura as they both await their injured partners’ return.

Time to remind everyone that championship contender’s matches are dumb. Imagine if you had to win a marathon for an opportunity to race in the same marathon? Riddle and Jimmy square off, but a gut-wrench suplex by Riddle allows him to tag in Nakamura, and his new partner delivers his old move as Shinsuke assists Riddle in a standing moonsault as Orton likes to do.

Riddle re-enters and takes a cheap shot to the face by Jey from the floor, followed by another by Jimmy from the apron. Riddle stumbles over to his corner to hot-tag Nakamura, who enters with his greatest hits, again just like Orton used to do, including Good Vibrations and his sliding German suplex. Jey distracts Nakamura from hitting his Kinshasa just before the break, and when we return it’s Riddle getting a hot tag.

A couple of flying forearms lead to an attempted hangman’s DDT, which Jimmy avoids by sending Riddle over the top. Nakamura tags in on the fly, though, and enters with a Kinshasa that nets a two-count (it really was a three, as Jey was clearly too late breaking up the pin).

Another tag in for Riddle, who goes for scoop slams and a successful hangman’s DDT, following by calling for an RKO. Who is Matt Riddle right now, really? Jimmy seems to decide that this has to come to an end as he attacks Riddle from the floor using the Bro’s scooter, forcing the ref to call for the bell.

Yes, this mean they get a championship match.

Kevin Patrick catches up with Mustafa Ali, who’s excited to leave Hell in a Cell as champ, only to be attacked once more by Theory.

Next up, Corey Graves introduces a Memorial Day video package — seems like this should have been a Lacey Evans thing, no?

Ripley stuns Morgan with a clothesline and a headbutt, but Morgan clambers into Ripley’s back and screams as she holds on with a headlock. She soon drapes Ripley across the ropes and hits her in the back with a dropkick. Ripley, on the floor, picks Morgan up onto her shoulders from the apron, walks around in a circle, and puts her back on the apron again. Huh. Morgan tries a hurricanrana but Ripley catches her and swings her into the barricade going into a break. 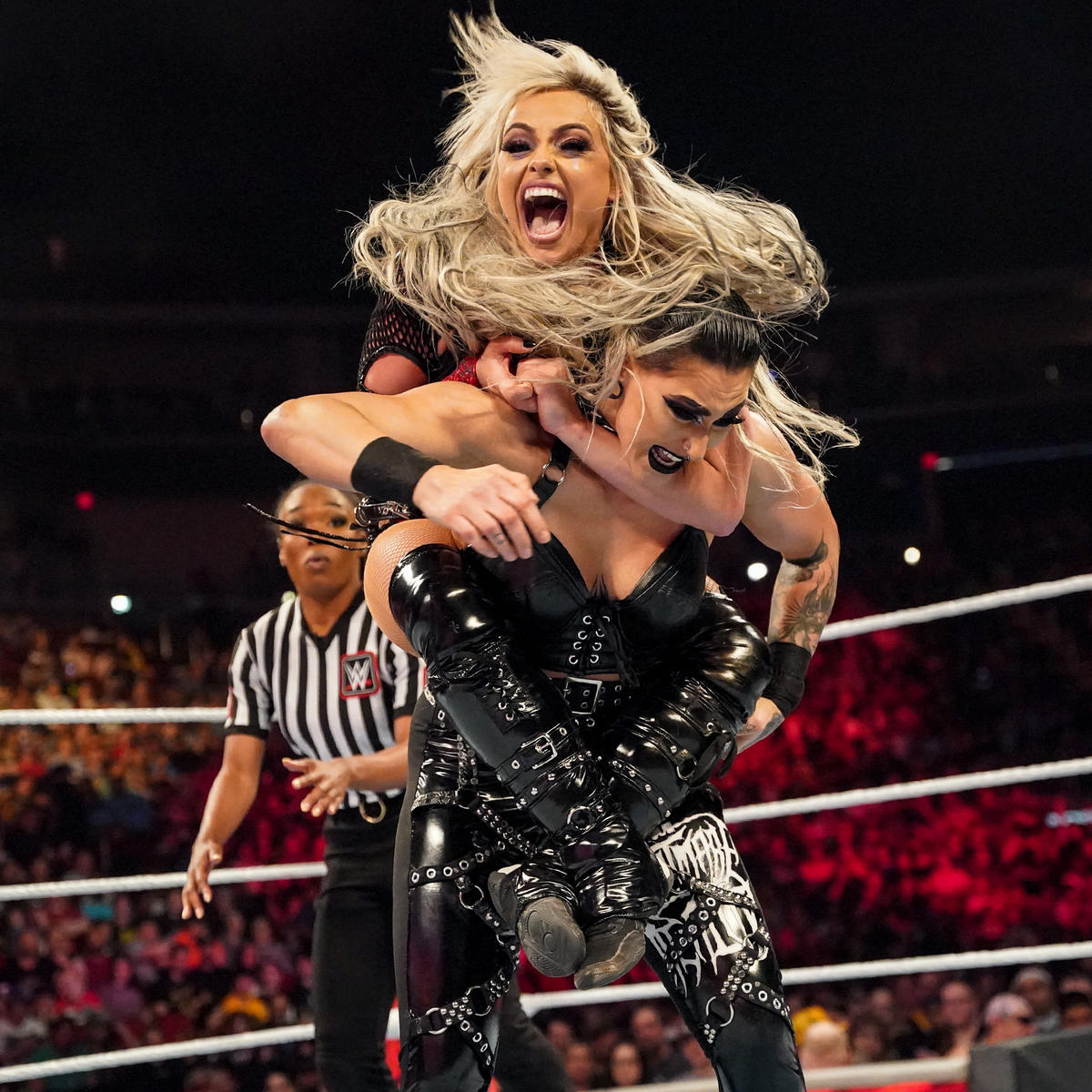 When we’re back, Damian Priest and AJ Styles have appeared at ringside while Ripley uses an abdominal claw to wear Morgan out. Ripley admonishes Morgan for making her weak when they were a team, but Morgan first dodges a corner attack and then launches a solid crossbody to Rhea on the floor. as they re-enter the ring, Priest blocks an ObLIVion by grabbing Ripley’s belt, bringing Styles running around to deck Damian. Meanwhile, Morgan hits a backstabber on Ripley for the three-count.

Well, it was a two-count, as the ref never hit the mat for a third time, but still called for the bell anyway.

A big fight breaks out after the bell, bringing Finn Balor down as the babyfaces take the day, wearing out both Ripley and Priest with finishers.

That leaves just one bit of business: a contract signing between Bobby Lashley, MVP and Omos for their handicap match at Hell in a Cell. The crowd “Whats” their way through the opening of the segment, and then just quietly awaits the inevitable. Everybody signs and Adam Pearce looks shocked that a fight breaks out. Security guards go flying and Cedric Alexander even interferes to help out Omos and MVP. It all finishes up with Lashley spearing Omos through a table leaning up in a corner, immediately bringing the show to a close like that was a stipulation for ending Raw.

Some things felt fresh tonight. The brawl between Rhodes and Rollins, the manic energy of Lynch, and some hard-hitting moves made this feel less rote and made for a more dynamic show. Stop the championship contender’s matches and shave an hour off the program and you’d have a real winner.