NWA USA: A Dane Event that looks to be Miserably Faithful 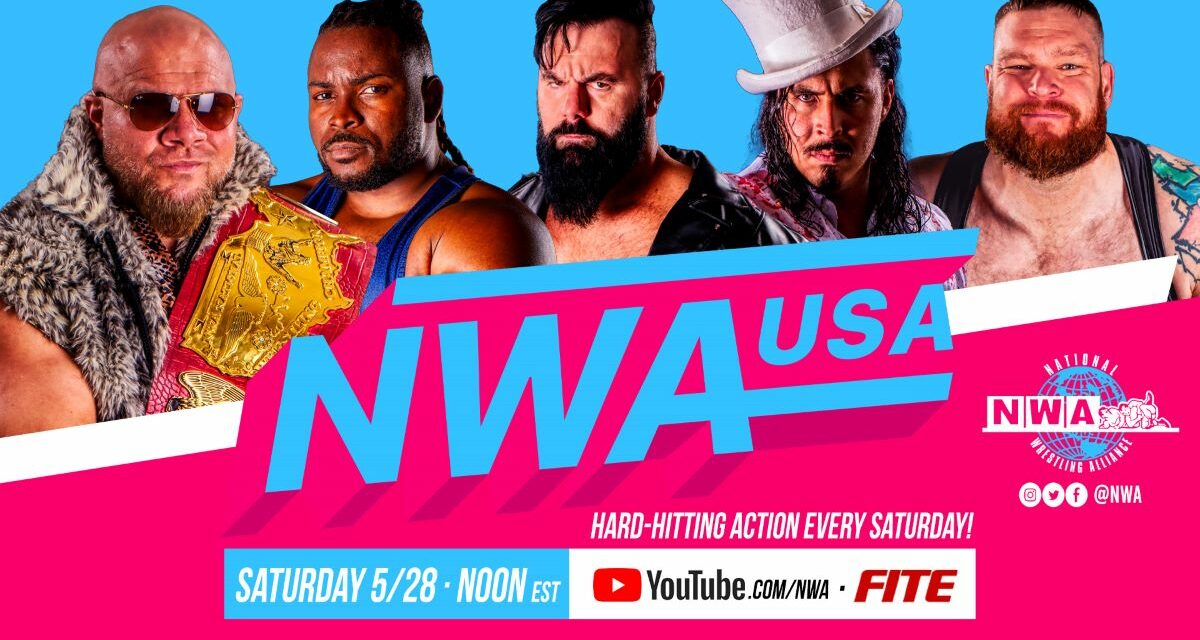 Welcome to Saturday, where the NWA USA makes its debut in the Bluegrass State of Oak Grove, KY.  The show has a Dane Event as the NWA National Champion teams with “Magic” Jake Dumas to take on the Miserably Faithful.  It’s a question of whether evil with triumph or the odd pairing of Dane and Dumas will pull a magic trick out of a hat.

The show opens with a cold open as Kyle Davis is with Jay Bradley, and he’s upset that May Valentine is not around to interview him (Me, too, bro).  The Boss says his match with newcomer Bradley Pierce looks to be a big debut match, but he promises it’ll be his last match.  Why?  Well, because…Fixers Rule.

We go to Valor Hall in Oak Grove, KY.  Once again, Joe Galli, Tim Storm, and Tyrus have the call, and it’s time for your First Match… 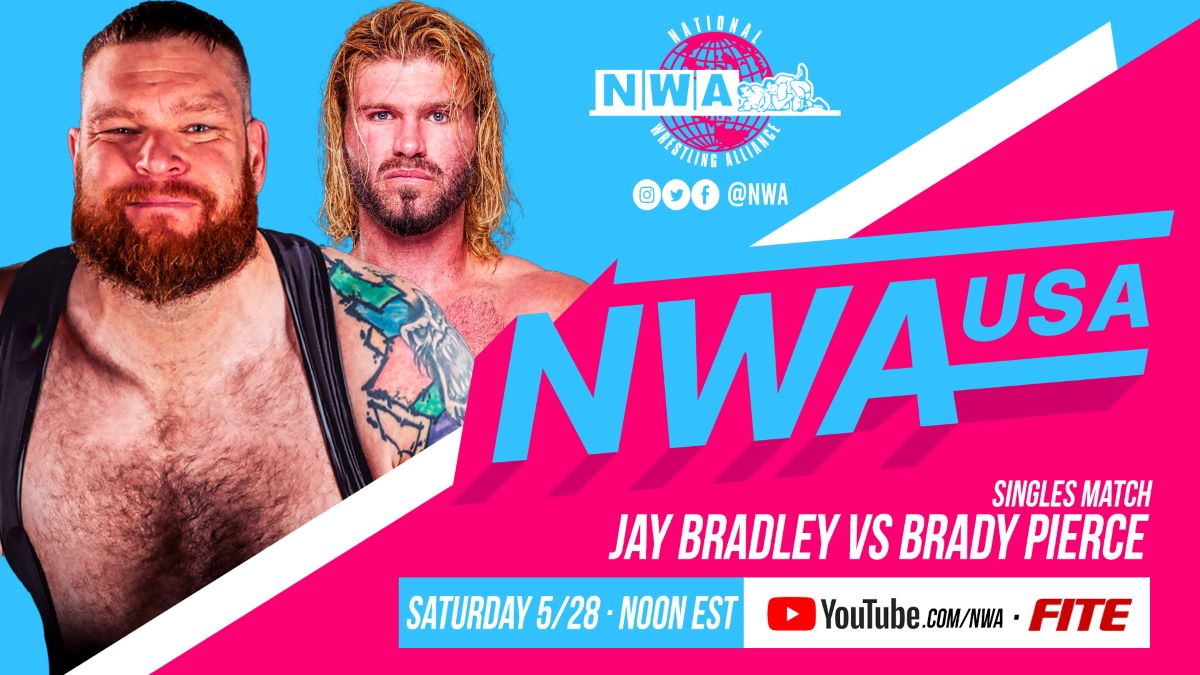 Pierce, Galli says, has done work as a stunt double on the STARZ television show HEELS, and I can see him as a stand-in for Alexander Ludwig’s “Ace Spade” character.

While I was checking his IMDB profile, Bradley Pearl Harbors the young man in his debut, but Pierce shows tenacity in the early moments of the match.  However, The Boss is in full control sending him to the outside, and Bradley does a tope suicida to Pierce.  He gets Pierce pnm the ring edge and gives three clubbing forearms; one for “Wrecking Ball” Legursky, one for Velvet Sky because he loves her, and one for Pierce because he’s stupid.

Back in the ring, Pierce gets his shots in to The Fixer with elbows and a neckbreaker to cover for a two count.  He goes for a suplex but Bradley reverses to a snap suplex, then a flying shoulder tackle, and then into a backbreaker.  Back up, Bradley sends to the ropes, but Pierce reverses and gets a big boot and then a spinebuster.  But Bradley hits Pierce with Snakes Eyes on the top turnbuckle.  Pierce’s head is on the second turnbuckle and Bradley proceeds to kick it, leaving Pierce reeling.  Bradley finishes with the clothesline and Tyrus says to roll the credits on the kid’s debut.

Kyle Davis is backstage with The Miserably Faithful and he talks to the architect of evil himself, Father James Mitchell, about this new stable, but I’m letting The Sinister Minister himself speak to that matter:

Those things combined can turn the National Wrestling Alliance on its ear, and in just a few minutes, we’re going to do that when we step in the ring with Jax Dane and “Magic” Jake.  Now, Jax Dane, you are a big monster. But so is the High Priest of Punishment, Judais, and the difference between the two of you is he has a brain instead of an empty bucket upstairs. And then, “Magic” Jake, you may have noticed that my pal Sal over here has undergone a bit of a transformation. He’s well versed in magic, too…except his doesn’t involve pulling a rabbit out of a hat. So, you get ready, gentlemen.  Tonight, you’re going to be pulling our pitchforks out of your asses.”

What can I say?  Hell has the hottest promos in Father James Mitchell.

Now onto the next match and it’s… 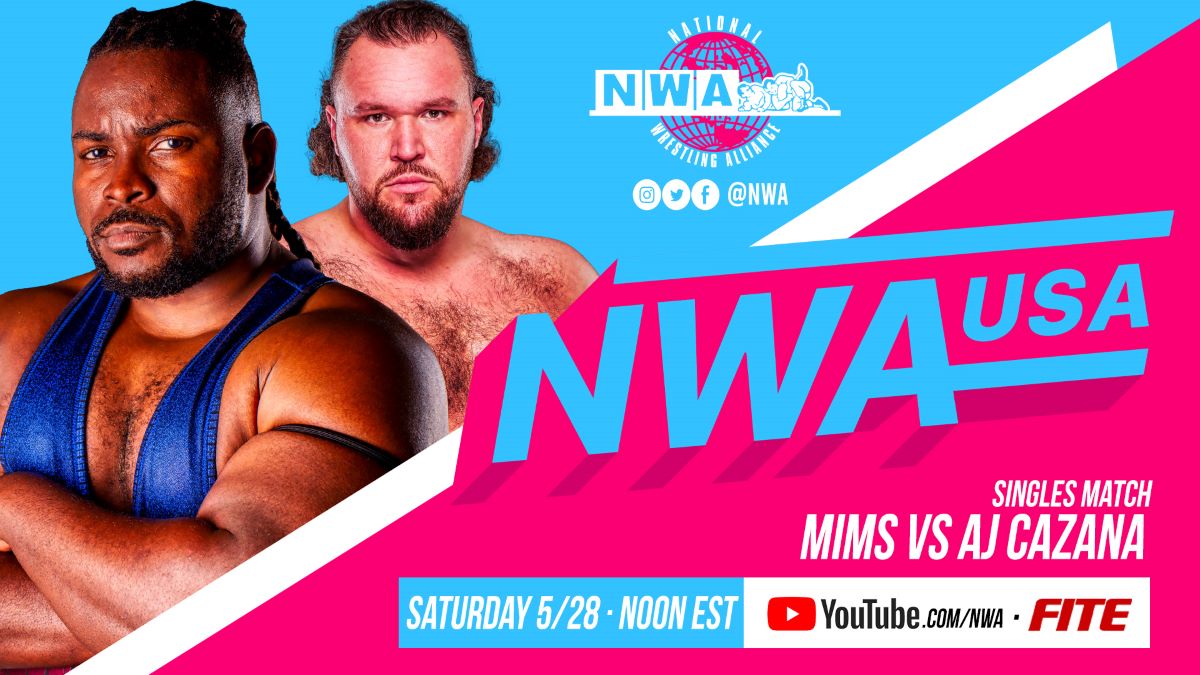 The last time both men fought was to a time limit, so it’ll be interesting to see how this time fares.  The fans’ chants of “Let’s Go Mims!” echo through Valor Hall.  The match goes back and forth between the big men, with Tyrus commenting that Mims was lucky to slam him a while back.  This is a textbook case of Mims getting Cazana in a monkey flip, but Cazana fires back with forearms and then gets Mims in an abdominal stretch but Mims powers out because (sing it with me) he’s Big and Strong.  He shoots Cazana in the corner and Mims slams him down (which Tyrus missed for some reason) and goes for an elbow that misses the target (and, of course, Tyrus saw that).  Both men deliver clotheslines, but neither is going down.  However, Mims finishes with the Big Strong Slam for the pin and the win.

Tyrus is even-handed with his praise of Mims but says he’d better focus on their NWA Television Championship match at the Alwayz Ready PPV. 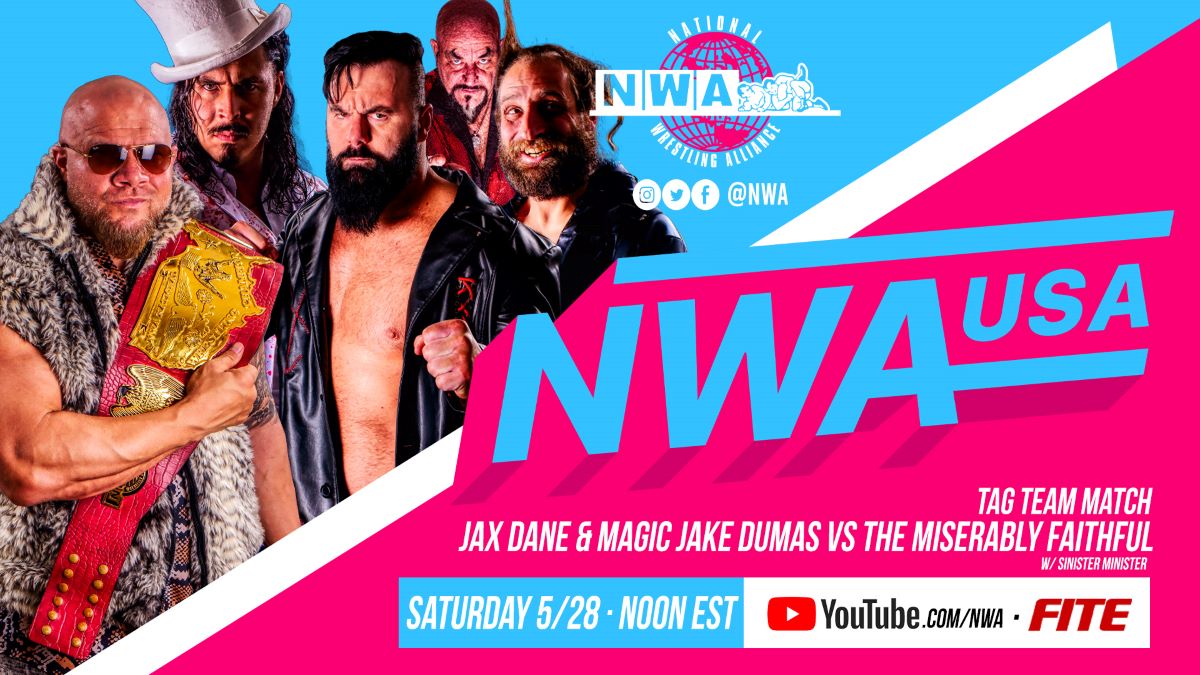 The Miserably Faithful (Judais and Sal the Pal, with Father James Mitchell) vs. Jax Dane and “Magic” Jake Dumas

I am still not big on heel versus heel matches, so I’ll just do what I normally did in Catholic School…side with the devil.  Therefore, I’m Team Miserably Faithful.

Dane starts the match for the team facing Sal, and he’s wearing the furry vest while manhandling Sinister Sal (and Tyrus calls him a fashion plate.  Ha!)  He tags in Dumas and Sal is now playing mind games of a sort with the magician.  During this, the referee, Jacob Fritz, is bent over like he’s choking.  Dumas goes to him, and he coughs up a playing card.  He shows it to Sal, who promptly eats it.

(Author’s Incredulous Note:  I seriously need to be ringside at these shows to witness the baffling genius of it all!)

A springboard stunner by Sal and he dropkicks Dumas to the outside, and the Miserably Faithful stalk the magician.  Back in the ring, Dane levels Sal with the Dane Event.  Once Dumas gets back in the ring he works over Sal and gets a TKO for a two count.  Dumas tries to work over Sal, but he manages to escape his offense and now he gets the hot tag to Judais, and he is a High Priest of Punishment, even delivering a nice one-fingered greeting of friendship to The Dane Event.  Dane gets in Judais’ face…and then promptly backs away to the back of the ramp.  Dumas tries a chokeslam, but Judais reverses the magic trick and delivers with authority.  He tags in Sal and attempts to slam him on Dumas, but Dane pulls him out of the ring at the last second.  The action spills out into the Hall, and Dumas is left in the ring.  Suddenly Gaagz The Gymp comes out and gets Dumas with a tornado flying bulldog, and Sal goes in to cover for the one, two, and three.

Your Winners via Pinfall:  The Miserably Faithful

Once again, evil reigns supreme much to Father James Mitchel’s delight, as the show goes to credits.

On paper, that main event should not have worked.  But the devil is in the details, if you pardon the pun, and The Miserably Faithful is a must watch, regardless of the match any of the stable are in.  Dane has got his “cocky/chickens***” act down to a “T” and I want to see more of this as well before his comeuppance.

Pierce had an impressive debut, and it will be interesting if he stays in the NWA longer than a cup of coffee.  Mims is still Big and Strong, but he and Cazana had a nice power match, too.