Ace Austin rises to the top at the BOSJ 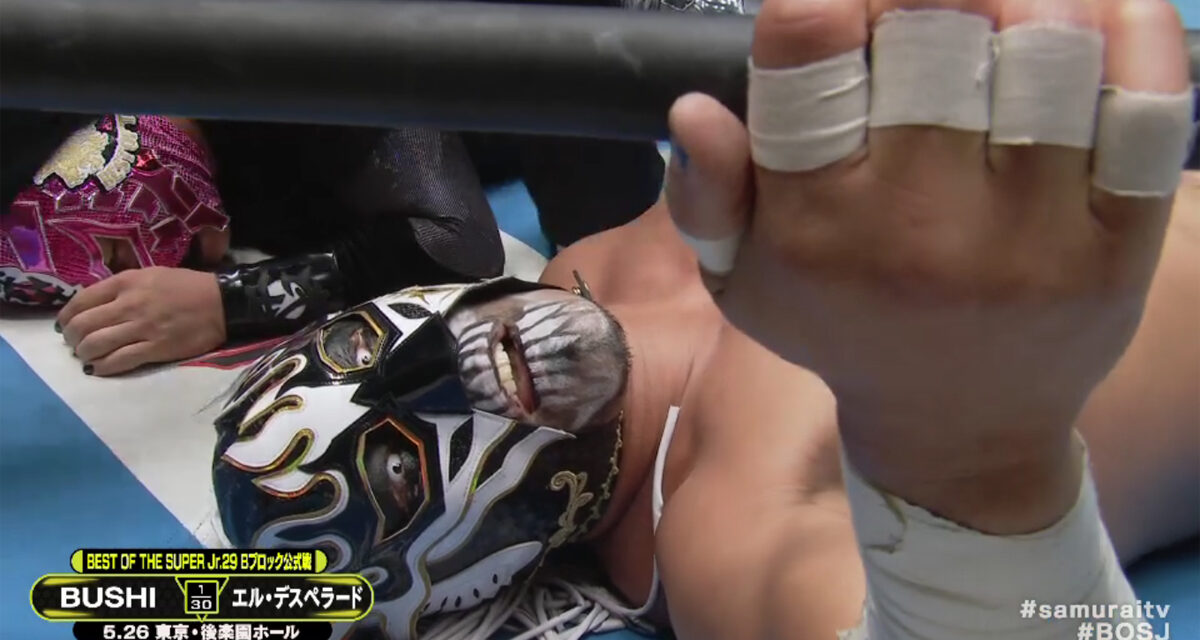 The big news out of today’s Best of the Super Juniors action is that gate-crashers Ace Austin and Alex Zayne are at the top of the A Block standings. Both stars have had a tremendous tournament with fantastic matches and all of that hard work, those victories are paying off. Austin is leading A Block with 10 points. He has only lost one of his six matches. That was to Hiromu Takahashi. Zayne is now in second place tied with Taiji Ishimori at 8 points. Zayne only has two losses and those losses are to Ishimori and Austin.

CMLL star Titan and Ryusuke Taguchi are now out of contention to win the tournament.

The tournament continues on Saturday. The finals are on June 3rd.

Titan versus Master Wato –  BEST OF THE SUPER Jr. 29 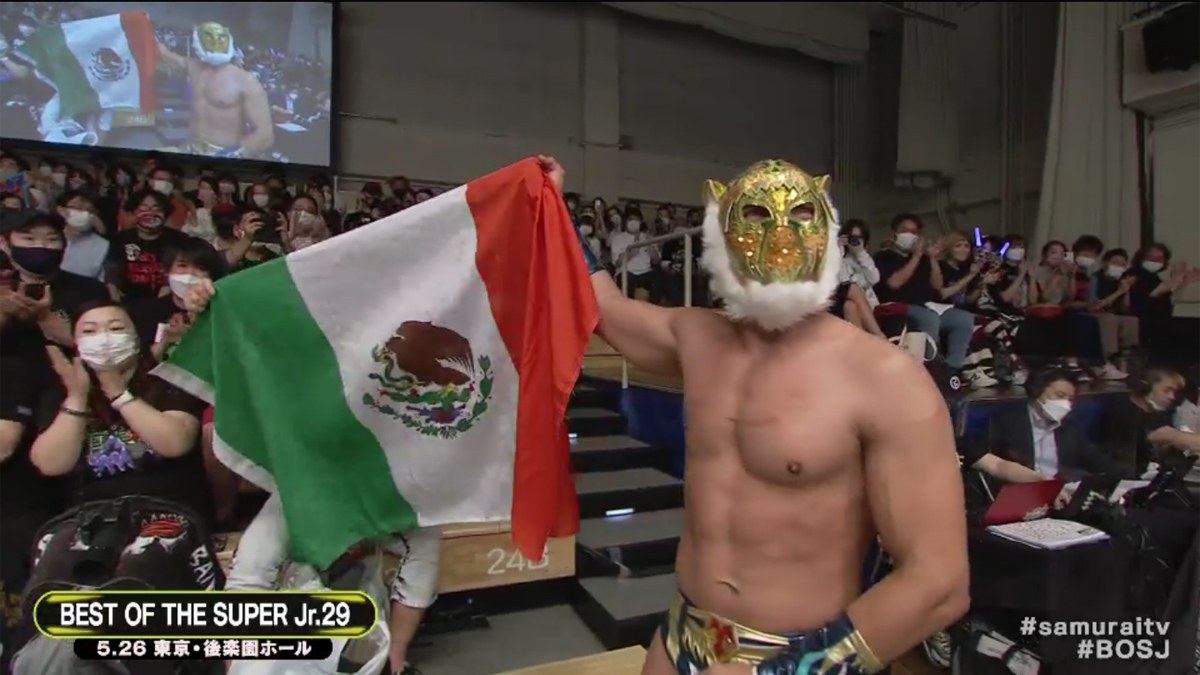 Wato wins with his RPP splash.

TJP switches the “Douki Chokie” into his Pinoy Stretch for the win.

Yoshinobu Kanemaru versus Clark Connors – BEST OF THE SUPER Jr. 29

Connors catches Kanemaru as he attempts Deep Impact. Connors extends his winning streak with a Trophy Kill. Connors takes a drink of Kanemaru’s whiskey to celebrate his win.

Ryusuke Taguchi versus Alex Zayne  – BEST OF THE SUPER Jr. 29

Francesco Akira versus Yoh – BEST OF THE SUPER Jr. 2

Akira gets a big win pinning Yoh with the Fireball staving off elimination.

Wheeler Yuta versus El Lindaman – BEST OF THE SUPER Jr. 29

Lindaman wins with a German Suplex.

Ace Austin versus Taiji Ishimori – BEST OF THE SUPER Jr. 29 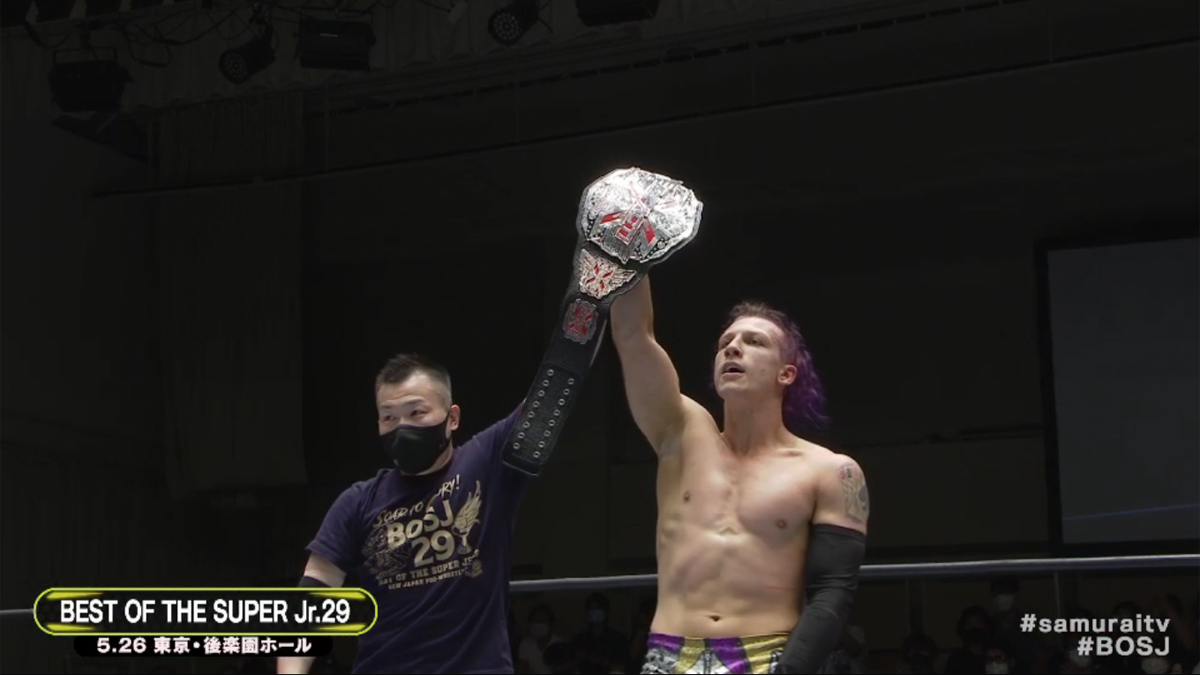 Ace Austin has his hand raised in victory. Courtesy: NJPW.

Ace Austin blocks the Bloody Cross turning it into a Northern Lights Suplex for a two count. He pins Ishimori with a bridging pin. The commentators argue the ref’s call because both men had their shoulders down.

Bushi versus El Desperado – BEST OF THE SUPER Jr. 29

Bushi lands the MX on Desperado for the victory.

Hiromu Takahashi versus Sho – BEST OF THE SUPER Jr. 29

A thrust kick knocks the wrench out of Sho’s hand. Sho taps out to Hiromu’s D but Evil interferes pulling the official out of the ring. Evil gets D locked on him. Sho loads his boot, kick pads with the wrench. Sho kicks Hiromu’s legs, knee with the loaded boot. Hiromu taps out to a deathlock.

Robbie Eagles versus El Phantasmo – BEST OF THE SUPER Jr. 29

Phantasmo taps out to the Ron Miller Special.