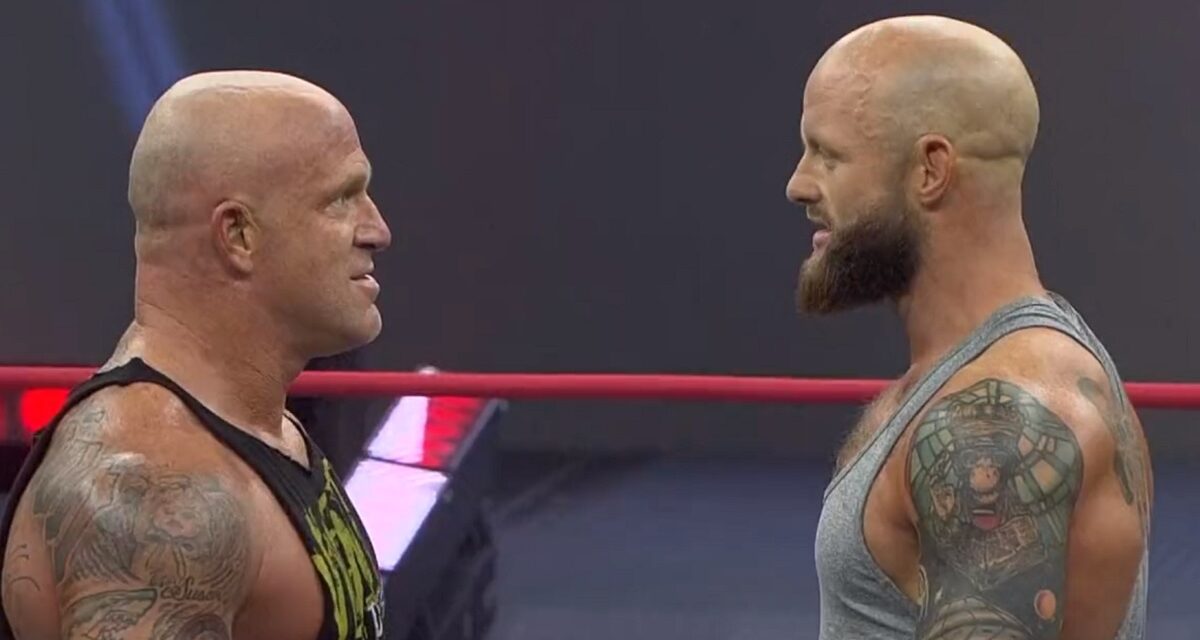 Given that we’re in NHL playoff season, it’s fitting that two Canadians – Eric Young and Impact World Champion Josh Alexander – ended Thursday night’s edition of Impact Wrestling with a face-off that quickly devolved to a bench-clearing brawl. But instead of giving them a major penalty or a game misconduct for fighting, the two of them will get even more chances to drop the gloves over the next few weeks as they get ready to face one another for the title at Slammiversary.  The rest of the episode was equally effective in building up to that show.

This started off really quickly as one might expect given these two, and eventually they came to a deadlock.

This is exactly the kind of amazing, fast paced action we expected from @Laredokidpro1 and @SpeedballBailey. #IMPACTonAXSTV pic.twitter.com/jG3UIrWgHx

The pace eventually slowed down, but the moves never did, as they had several exchanges of strikes and aerial assaults throughout. Some notable moves were Bailey hitting a Springboard Double Knee Stomp which looked really good, Kid hitting a series of Moonsaults inside and outside the ring, and a beautiful Liu Kang Spin Kick by Bailey. The end finally came after a series of rollup reversals, with Bailey finally getting the win – though this could be disputed since his legs were under the bottom rope at the time.

This was really good and reminiscent of X-Division matches of old. The finish begs for a rematch – and after this one, even a “best-of-7” series would be welcome.

Ace Austin did a video promo from Japan, where he’s currently competing in the NJPW Best of the Super Juniors Tournament. He said that neither Bailey nor Kenny King would be able to beat him in the Ultimate X match for Austin’s X-Division Championship at Slammiversary, and that they’re both fighting for second place in the division.

A neat hype video aired for Slammiversary. It seems they may really be celebrating the history of the company’s TNA roots this time, based on the video, which featured “TNA” chants and a wooden chest adorned with the old logo.

Matt Cardona and Chelesa Green sent in a video promo from their honeymoon in the Maldives. Cardona mocked Rich Swann, and Green said that she was going to win the Queen of the Mountain match at Slammiversary to become the Knockouts Champion for a second time. These two are obnoxious.

Things just started to get rolling in this one, with Taya in control of Steelz, before heading to an ad break. When we returned, Jordynne was beating up Tasha, holding her vertical for 30 seconds before dropping her with a Jackhammer.

Steelz’ teammates cheated to take the advantage, and they spent several minutes punishing Grace. Grace finally escaped and tagged in Mia who took over, planting Steelz with a Sit-Down Tailbone Buster for a near all. Soon, everyone was involved and hits came from all sides. In the end, Mia hit Eat Defeat on Savannah Evans to get the win for her team.

This was fine, though it had a few bumpy moments. Savannah, in particular, seemed out of place at times compared with the rest of the talents involved.

Madison Rayne was accompanied by her Knockouts Tag Team Championship partner Tenille Dashwood for this edition of the talk show. They mentioned the teams they’ve recently beaten, and they mentioned the absence of Johnny Swinger – and, like Beetlejuice, he appeared along with Zicky Dice. Then, Rosemary and Havok teleported onto the set and challenged the champs before disappearing. Madison quickly ended the show afterwards.

Backstage, Gia Miller interviewed Chris Sabin, who wanted to celebrate Impact’s 20th year by challenging one of his earliest opponents – Frankie Kazarian – to a match next week.

The “Flashback Moment of the Week” came from June 25, 2003 when Kazarian beat Sabin in a singles match.

An Eric Young promo aired, wherein he talked about his career history, from the indie circuit through today. He said that who he is today is his true self. And at Slammiversary, he will show that the world belongs to him. This was short, but really good.

Gia Miller interviewed Impact World Champion Josh Alexander who defends against Young at Slammiversary. Alexander acknowledged Young’s accomplishments in the past 20 years of the company. But said that he was the man to lead the company into the next 20 years, and that he is ready to fight Young for that right.

The other members of Honor No More and the Bullet Club weren’t allowed to be at ringside for this one, though Maria Kanellis-Bennett was allowed to join the commentary team. Tom Hannifan referenced Maria’s history with Karl Anderson from Japan – Google the video and you won’t be sorry – but she tried to deflect the subject.

The dynamic was interesting in this one, since neither one of these teams are babyfaces. So there were some dirty tactics employed on both sides, making it a pretty even matchup. After some jockeying for position, Taven and Bennett isolated Anderson for a while. Anderson hit a Spinebuster to escape and tagged in Gallows who was on fire, and nearly got a fall after a nice-looking Pumphandle Driver on Taven. The ref lost control and all four men battled in the ring for a while. Some miscommunication led to Bennett accidentally hitting Taven, and the Good Brothers tried to capitalize, but Maria left the broadcast table and jumped on the apron to distract the ref. Some more distraction resulted in Bennett Spearing Maria by accident. Anderson then hit the Gun Stun on Bennett to get the pin.

This was pretty entertaining, and after this outcome, it would seem the feud between Honor No More and the Bullet Club will continue.

A Sami Callihan promo aired. He said that he can’t blame Moose for breaking his leg, because he would have likely done the same to Moose given the chance. But that doesn’t mean he won’t get payback. He said that Moose needs to be aware that Sami is coming for him and will make his life a living hell.

This was a brutal squash that Slamovich ended in less than a minute with a Snow Plow.

After the match, Havok’s music hit and she came to the ring and got right in Masha’s face. The two jawjacked and went forehead-to-forehead to end the segment. This could be interesting.

Another Slammiversary promo aired. In this one, Josh Alexander opened up the TNA chest and various clips of TNA shows of yesteryear flashed on the screen. He closed the chest and smiled.

Echos of the past still reverberate in our hearts.

Join us at #Slammiversary on June 19th – 20 years to the day since our very first event – as we celebrate 20 years of TNA and IMPACT Wrestling.

Get tickets and be a part of history in Nashville: https://t.co/FJ3SCUbLtB pic.twitter.com/xHI2XiQWHf

Backstage, Raj Singh was with Shera and threatened Bhupinder Singh. Bhupinder walked up to them and said if they had a problem with him, they could solve the problem in the ring. Raj questioned Bhupinder’s sense in trying to fight when outnumbered two to one. W. Morrissey walked in to even up the odds. The match was made for next week.

The Briscoes were wary when in the ring with the giant Doering, but had some success against Deaner, blistering him with their unorthodox double-teaming. As an example, after Mark hit Deaner with a Flying Somersault Splash off the apron to the floor, Jay got cut in half with a Flying Cross Body by Doering that just smothered him.

That move let VBD take over, and they trapped Jay in their corner – which also allowed Young to take some cheap shots from the floor when the ref’s back was turned. Jay finally frenzied himself out of there and tagged in Mark who cleaned house, even nullifying the Doering threat with a huge Flying Somersault Bomb. A Neckbreaker Powerbomb combo on Deaner almost ended things, but Doering stopped the Briscoes’ momentum again.

In the end, the Briscoes had Deaner up for a Doomsday Device, but Doering went after Mark who was on the top rope. As Doering was tied up with Mark, he didn’t see Jay drop down and roll Deaner up for the pin.

This was a good match – dang, it’s good to see the Briscoes on TV. The aftermath and the Alexander and Young promos really helped build the match for Slammiversary.

Pretty much every match on the show delivered this week, and the various promos and segments building up to Slammiversary were effective. With a month to go before the show, hopefully the momentum can continue, and things don’t get too repetitive. If they’re all like this one, this will be a fun few weeks.