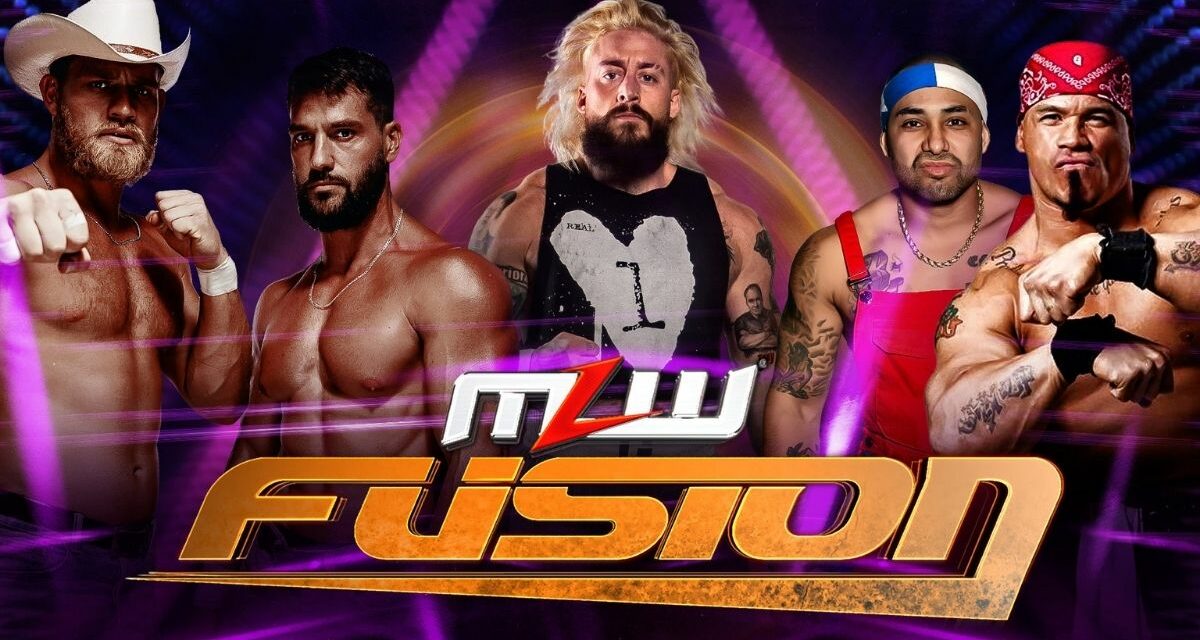 This week’s MLW Fusion was from Dallas Texas. The show opened with a recap of The Von Erichs and 5150’s current feud to pump up the impending main event. Once again, we got to see 5150 disrespectfully toss the Von Erich family’s World Class Championship belt into the river. Hopefully, it washes up somewhere down the road.

nZo kicks the show off by entering the ring wearing a ridiculous leopard print robe, and a striped outfit, with a poop emoji patch on the butt of his trunks. His opponent, Budd Heavy, walks out and chugs a Bud Light like he’s about to have a Thursday night bar fight. nZo would send Budd packing after bouncing the man’s head off of the ring post. He then makes an open challenge, requesting a better opponent to challenge him from backstage. ACH would answer the call.

The match was mostly back-and-forth tight grappling to start out. The two end up brawling outside of the ring, where NzO would nut-shot ACH on the barricade and then slam him neck first into the ring post.

ACH would eventually fight back and climb the top rope. Before ACH could execute, nZo kicked the referee into the ropes, causing ACH to fall onto the top turnbuckle for yet another nut-shot. nZo would then cover ACH for the win.

KC Navarro showed up after the match and tried to go after nZo, but he was held back by officials on the stage.

The nZo match was followed by a brief 5150 package, and then a Battle Riot IV teaser.

I’d like to make a note that the referee in this match had one of the most beautiful handlebar mustaches that I’ve ever seen.

The match begins, something gets sprayed in the eyes of EJ Nduka while the referee is distracted, of course. The man is temporarily blinded and he gets worked in the ring for several minutes before he can finally make a tag. Tankman jumps in and clears the ring but looks gassed after the first 30 seconds of being in action.

Tankman gets the pin after a short, not very eventful match.

The Von Erichs do a short backstage promo to hype up the main event.

Cesar Duran, still holding ice on his eye from an entire week ago, makes an announcement that he will fight Hammerstone next week. Because Cesar Duran is a real man, and real men solve their problems themselves.

The Von Erichs vs 5150 Throwdown in a Bunkhouse Brawl

There are several bales of hay ringside, a rake, a door, and various other weapons available around the ring during the match. The first weapon to get busted is a cheap-looking unfinished door, which seems to be a go-to for MLW. Do they not have access to tables like every other wrestling organization? There was even a brand new shovel that they didn’t even bother to take the sticker label off of. I don’t think it got used at all, what a waste of a good shovel.

The two teams brawled for about ten minutes, breaking everything they could at their disposal. It was a good match but nothing brutal or all that special. The Von Erichs would end up getting the win with the good old claw and slam finisher. Now they can go swim that river and try to retrieve that belt hopefully.

Winner: The Von Erichs by pinfall.