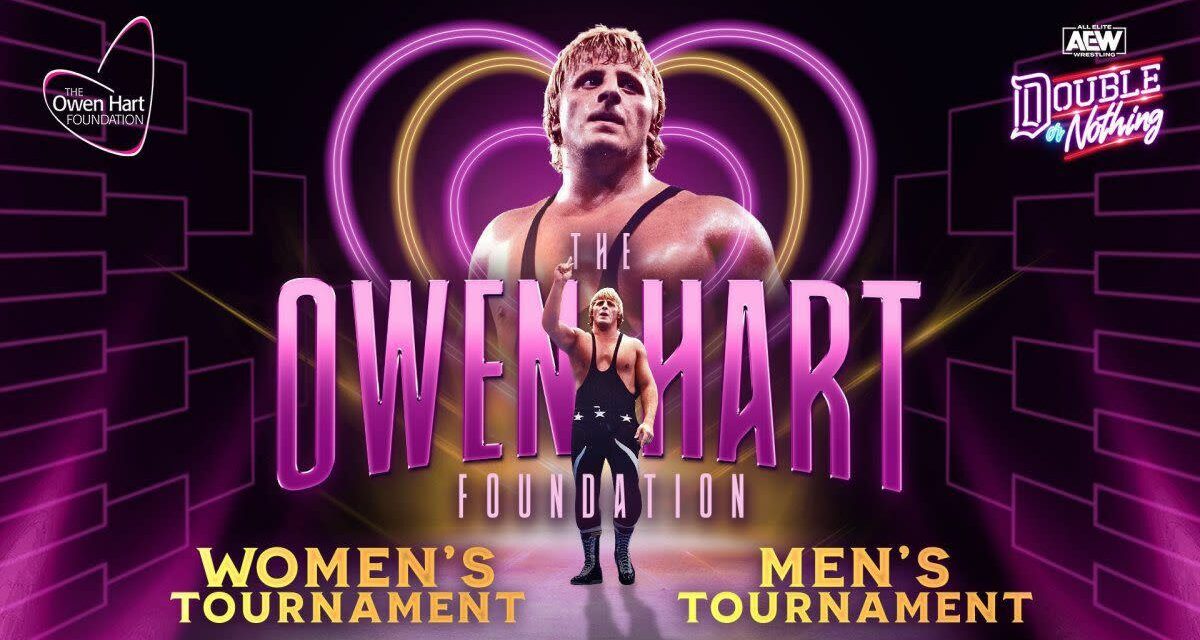 It’s Wild Card Wednesday on AEW Dynamite as the Owen Hart Foundation Tournament is in full swing. Tonight, both joker spots will be revealed for the men and women, hence “wild card”. And with only a week and half until Double or Nothing there’s still work to be done ny those not in the tourney. Let’s get to it!

A big chop sends Johnny into the corner. Joe fights off an ankle lock and Johnny Elite tells him to bring it. Joe powers him into the corner and lays into him with closed fists. Elite fights back but runs into a shoulder block.  Johnny with a front face lock, taking Joe to the mat. He follows with a cartwheel lariat. Joe goes to the floor and Elite takes him out with a spinning moonsault from the top turnbuckle.

Back in the ring, Joe with an inverted atomic drop and follows with a senton. Johnny kicks out at two. Elite doesn’t have the strength to get Joe up on his shoulders. A massive chop falls Johnny. Joe sets him up on the turnbuckle, looking for the Muscle Buster. Elite escapes and goes up top to connect with a 450. Joe kicks out. Elite goes up top one more time, but Joe gets the knees up on the split legged moonsault. Joe unloads with palm strikes and sets Johnny up for the Muscle Buster. He connects and covers Elite to get the three count.

Immediately after the bell, Jay Lethal attacks Joe. Satnam Singh hold Joe allowing Lethal to crack him with a steel pipe. Trent Beretta and Chuck Taylor run in to chase them off.

Jeff Hardy has been medically cleared to compete. The Young Bucks interrupt the interview, telling Jeff to take the night off. He has to think of his friends and family, and Adam Cole is going to whoop him. Matt says his brother is going to be fine and the Young Bucks will never be tougher then the Hardys. Matt tells them to not interfere tonight.

Page comes out firing and Takeshita trades elbow strikes with him. A forearm shot knocks Konosuke off the apron. Page knocks Takeshita off the top turnbuckle. On the apron, the champ with a knife edged chop. Konosuke blocks a suplex attempt, but gets caught and Page slams him on the apron. Hangman goes op top and delivers a moonsault to the floor.

Back in the ring, Konosuke ducks multiple clotheslines and hits a blue thunder bomb. He then flies over the ropes to take out on the champ on the floor. Konosuke with a Helluva kicks in the corner, but Page follows with one of his own. The two trade German suplexes and then take each other out with simultaneous clotheslines. After trading shots, Page with a tombstone piledrive. Takeshita kicks out. Hangman wants the Buckshot, but Konosuke counters it. He hits an elbow and then a power bomb, but only gets a two count. Konosuke catches Page with a knees strike, but still can’t get the pin. Konosuke with a German suplex, but can’t bridge it into a pin. Page blocks the jumping knee and decks Takeshita out of mid-air. Page takes Takeshita up top, but can’t hit the superplex. Page with a lariat and follows with the Buckshot Lariat. Page picks up Takeshita and hits him with the GTS. He covers to get the pin as Punk is loving it.

After the match, Punk stares down the champ from the stage and walks down to the ring. The circle each other on the ramp, until Page storms off.

Fuego Del Sol calls out the House of Black with the backing of the Dark Order.

Well, Henry and Drake don’t even get an entrance so this match shouldn’t last long. Lee launches himself over the ropes to take out Drake with a cross body after a tag. He then picks up Henry, allowing Swerve to hit a double stomp into a powerbomb. Lee covers to get the win.

After the match, Keith Lee welcomes Texas to Dynamite. He says they are now a top five tag team. They are interrupted by Ricky Starks and Powerhouse Hobbs. Starks doesn’t think Lee and Swerve deserve a tag team title match over them. Jurassic Express joins the party. Christian wants Starks to shut up. Cage challenge both teams to a title match at Double or Nothing and next week, Jungle Boy will face Ricky Starks and Swerve Strickland in a triple threat match.

Tony Schiavone is backstage with Red Velvet and Kris Statlander. Velvet tells her that things have changed. Statlander tells her this isn’t personal, it’s just business.

MJF and Shawn Spears make their way to the ring because it’s time for Wardlow to take his ten lashes. MJF spits in Wardlow’s face, tryinh to bait him into attacking, but if he does that he loses his match. Wardlow takes the first two lashes with a smile on his face. MJF losses his composure with the next five strikes. Spears has to calm him down. Shawn takes the belt, but Wardlow doesn’t flinch on the strike. MJF goes for the final lash, but kicks Wardlow in the crotch. Spears holds him up and MJF decks him with the Dynamite Diamond ring. Spears hits the C4 and makes a mocking pin.

O’Reilly avoids the stomp and tries to take Fenix to the mat. Rey counters a sunset flip with a cross arm breaker. Fenix escapes and the two trade mat wrestling moves. They then trade kicks. KO runs into a kick, but catches Fenix with a rising elbow strike. Rey wraps KO’s arm around the ropes and connects with a springboard kick. A suicide dive sends O’Reilly into the security barrier. Fenix rolls KO into the ring and looks for diving head butt, KO catches him with a triangle sleeper.

After the commercial break, Fenix with another kick to the head. He hits a modified powerbomb for a two count. Rey with a hurricanrana, but only grabs one leg on the pin and KO kicks out. O’Reilly stops Fenix in his tracks with a kick, but a roundhouse kick stops him in tracks. Kyle hits two double under hook suplexes, but can’t fire off with third. Rey with a suplex and follows with a hook kicks. O’Reilly bounce off the ropes to deliver a clothesline. Both men strike each other from their knees and  go down. O’Reilly with a knee strike, but Fenix pops up with an enzuigiri. Fenix sends KO out of the ring with a hurricanrana over the ropes to the floor. Fenix wants a cutter, but O’Reilly counters into a cross armbreaker and Fenix taps out.

Bryan Danielson, and William Regal make their way to the ring. Jon Moxley joins them with Eddie Kingston, Santana and Ortiz in tow. The Jericho Appreciation Society walk out on stage, demanding now pyro or music. Jericho isn’t happy that the crowd was cheering as they go beat up last week.  Jericho runs down William Regal, calling him out for his failures and addiction. He then goes after the rest of the crew in the ring, insulting each and every one. Jericho tells Regal to go home or risk catching a fireball to the face.

Regal tells Jericho to be quiet. Jericho wants a stadium stampede match, but Mox turns him down. Instead, it will be a five on five anything goes match at Double or Nothing. Eddie Kingston wants a fight now, but the JAS walks off. Kingston and Danielson almost come to blows.

Matt Sydal and Dante Martin challenge any two of the wrestlers that were just in the ring.

The joker in the women’s tournament is Maki Itoh

The two hug and then Itoh lays down for Baker. But, Maki nearly rolls her up in a small package. Itoh starts to cry, but then stomps on Britt’s foot and smacks her in the face. Baker looks for the Lockjaw, but Itoh counter with a pin. Itoh with a suplex. Baker bets Maki into the corner and puts on the glove. She taunts Itoh and smashes her into the turnbuckle. It doesn’t faze Itoh, who smashes her own face into the corner. Make with a tornado DDT and covers for only a two count. Itoh connects with the diving head butt. Baker with a thrust kick and looks for the Lockjaw. She applies it and Maki taps.

After the match, Toni Storm stares down Baker from the ramp.

Serena Deeb interrupts Tony Schiavone in the ring. She is sick of hearing him talk. She isn’t happy that he said she can’t beat Thunder Rosa. Dustin Rhodes walks out and Serena insults him, calling him a failure. She isn’t happy that Dustin is also backing Rosa. Deeb talks of her history. Thunder Rosa has heard enough, walking out to confront her. Deeb slaps Rhodes. Dustin hold Rosa back, only to have Deeb crack Thunder Rosa with the title belt.

Adam Cole assault Jeff on the ramp, tossing him into the ring. Hardy kicks Cole and slams him at the bell. Jeff goes up top but Cole goes to the floor. Hardy with a splash off the apron. Cole catches Hardy on the floor and whips him into the steps, he then taunts Matt. In the ring, Cole with a back stabber. Hardy fights back with clubbing blows and hits a leg drop. Cole with an enzuigiri, but Hardy answers with a gord buster. Jeff with the Whisper in the Wind, but Cole counter with a super kick. Hardy grabs the ropes to break the pin.  Cole misses the knee strike and Hardy hits a stunner. He goes up top, but misses the swanton bomb. Cole Lowers the Boom with the knee strike and covers to get the win.

After the match, Matt has words with Cole. The Young Bucks run in. The Hardy see them, but that allows Cole to take them down. Darby Allin and Sting run down to help. Bobby Fish and Kyle O’Reilly join the fight, taking out Darby. Sting tries to fight on, shrugging off a chair shot. The Young Bucks hit him with superkicks. They put a chair around his ankle and stomp on it. There’s chaos in the ring as we go to black.

See you in seven!

AEW puts on another great show thanks to the Owen Hart Foundation tournament. Each tourney match is worth a watch. The MJF storyline with Wardlow is still going strong. The weakest part of the show may unfortunately be the CM Punk Hangman Adam Page story.