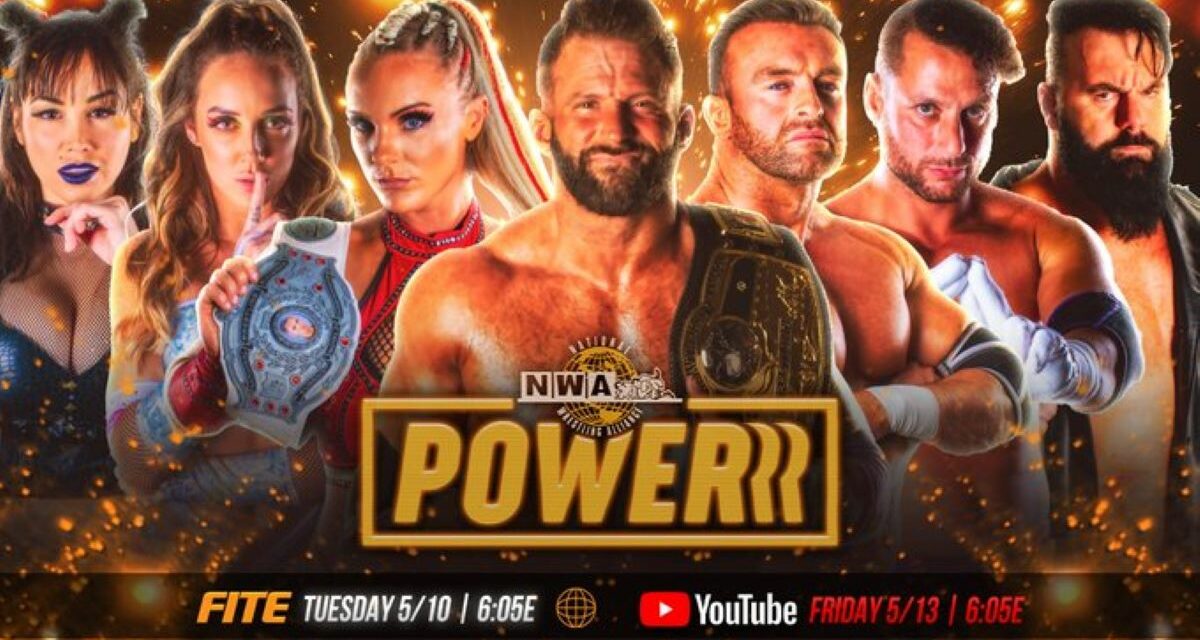 As The Cardonas are ruling the roost in the National Wrestling Alliance, there is an opportunity to even the odds in a six-man tag team match, put together by NWA owner William Patrick Corgan.  Nick Aldis is still at the forefront, and he’s got Doug Williams and Harry Smith of the Commonwealth Connection to have his back.  Can they even the odds in the main event?

We’ll find out later tonight as we go to a cold open with Kyle Davis talking to the Commonwealth Connection.  Williams says he’s ready to back up Aldis, and Smith says they’ve been running roughshod through the NWA tag division, and he confidently adds they will take the fight to The Cardonas in six-man action tonight.

Well, it’s time to head to the Skyway Studios in Nashville, TN.  Joe Galli, Velvet Sky, and Austin Idol have the call, and Idol loudly (even for him) expresses how upset he is over Big Strong Mims slamming Tyrus in the Slam Challenge.  But we need to head to the ring for the First Match of the night…. 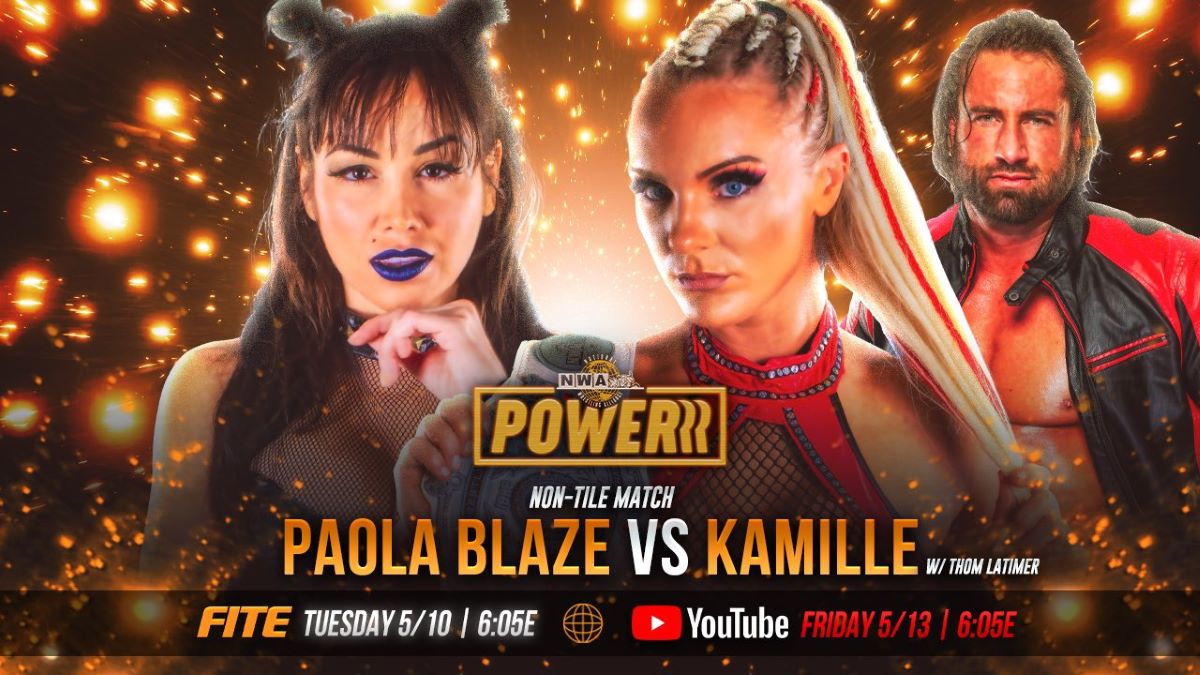 This is a non-title match, but Blaze is still up to the challenge as she tries to play head games with champ, but Kamille just ain’t having it.  The match is all Brickhouse on offense, even landing a spinning heel kick that gets a two count.  At one point, Kamille pulls up lame as she shows signs of pain in her knee.  As the ref checks on and goes to Davis to make an announcement, Latimer goes in ring to check on Kamille, and Blaze punts him right in the little Latimers.  Blaze uses the opportunity to attack the injured champ, focusing on the bad knee.  Kamille manages a Samoan Drop, and then a spinning neckbreaker but gets a two count.  As Latimer badmouths Blaze outside the ring, the ref tells him to back off at ringside.  With that distraction, Kamille returns the receipt to Blaze with a mule kick right in the…err, inner Blazes(?), and she delivers with not one but two spears to finish her off.

Kyle Davis is at The Podium with Matt Taven, and he reemphasizes he wants tag gold but wants to start a new trend in seeing if he would look better with the Ten Pounds of Gold.  Plus, he looks better in purple, because “He is I, and I am him and I’m (wait for it), Matt Taven.”  And his next match is with…

Judais (with The Sinister Minister) vs. Matt Taven

Personally, I think Taven bit off more than he could chew, as The Priest of Punishment overpowers him, but The Trend manages to stand toe to toe with Judais.  A dropkick by Taven misses, and Judais adds to the pain with an abdominal stretch, but he manages to wriggle out of the hold.  Judais gets him in a fallaway slam, and he is in full control.  Now Judais attempts with a choke slam, but Taven reverses with The Climax (front headlock driver), and he goes up top for a high-risk maneuver, but Gaagz the Gymp and Sal Rinauro come out to attack, and the ref has no choice but to ring the bell.

Your Winner via Disqualification:  Matt Taven

The Miserably Faithful attack in full force, and Taven does have Mike Bennett to back him up tonight.  It doesn’t look good for The Trend, but The Briscoes comes out to save Taven and clean house.  Curious that Dem Boys come to the rescue of one of their great tag rivals, but I guess strange bedfellows and all that.

May Valentine is backstage with Tyrus asking about Big Strong Mims winning the Tyrus Slam Challenge, and if his title was under threat.  He gives props to Mims, but he needs challenges.  He’s being smart, and he will defend a seventh time to get a shot at unifying the NWA Television championship with the Ten Pounds of Gold.  Valentine asks about the whole Idol/Cyon relationship, and Tyus keeps mum.

And now for something truly weird… 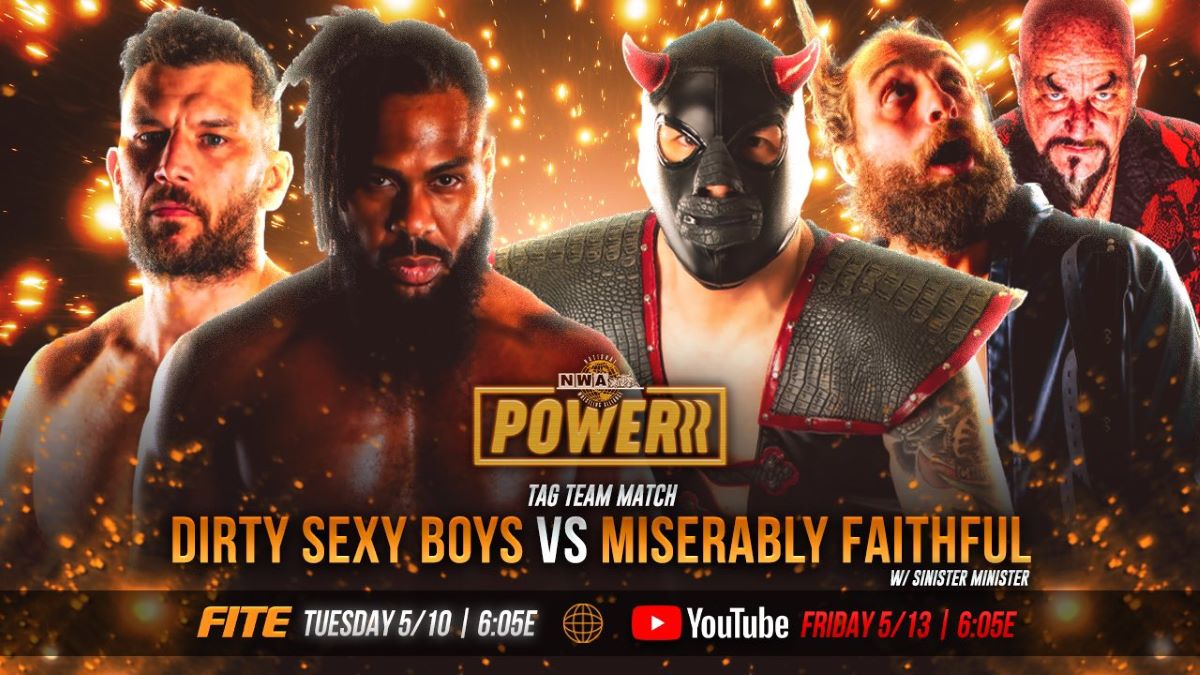 The Miserably Faithful (Gaagz the Gymp and Sal Rinauro) vs. The Dirty Sexy Boys (JTG and Dirty Dango…with Angelina Love)

Folks, as the great philosopher Hunter S. Thompson once said, “When the going gets weird, the weird turn pro.”  Never were truer words more appropriate than tonight.  Sky miffed that Love is with the Boys, and she goes into a rant that best friends shouldn’t go after their besties crushes.  Methinks she doth protest much, and you know this is telling when *Idol* has to be the voice of reason.

Anyway, JTG and Sal start, and JTG gets a sneak tag to Dango, and then it’s Dirty double team on Sal.  As JTG hits ropes, Gaagz kicks his back.  He knocks down the Gymp, but he grabs leg and Sal kicks JTG down, and now tables turned for JTG, and Gaagz goes Gympy on Tha Gawd.

(Author’s Note:  These are the reasons I love my job!)

In any case, Miserably Faithful keep JTG isolated, but he manages to head to his corner and get the hot tag to Dango, and boy does it get weird from there.  He tells Gymp to sit, and obediently gets on all fours, where Dango kicks him in the ribs.  There’s a moment of chaos as all fur men are in the ring, but Dango manages a falcon arrow to Rinauro to get the pin and the win.

Your Winners via Pinfall:  The Dirty Sexy Boys

After the match, Love gets some attention from the Boys, and Sky is being more vocal about this. Again, She is making more of this than necessary, and when Idol is telling you to calm down…well…

Da Pope was with Kyle Davis earlier in the day, and he’s concerned about the state of Trevor Murdoch’s mind, and what’s going on with him.  He wants to reach out and know what’s in his heart.  I smell a new matchup in the works.

That leads to a recap of NWA USA as Ricky Morton faced “Wrecking Ball” Legursky but click here for more coverage. 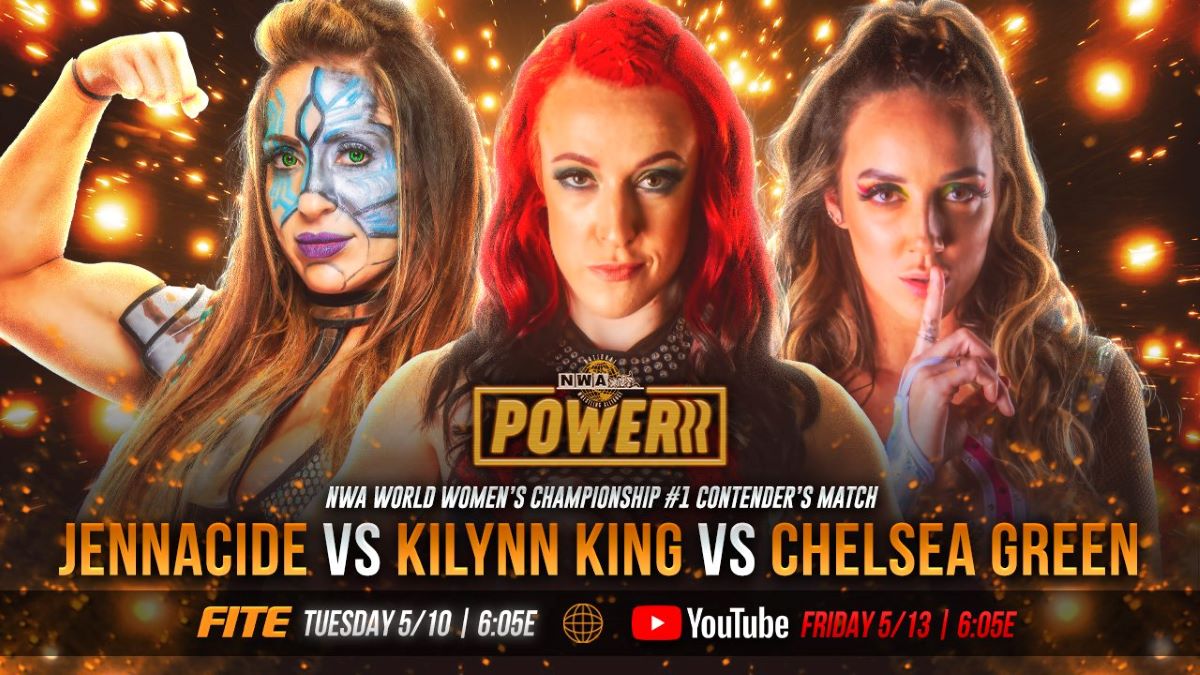 The start of the match is all over the ring, but King gets the early advantage, as Green takes a powder.  She goes against the Cyborg, and it is a hard-hitting affair.  Jennacide  gets a facewash on King, but Green goes for the p. and only  gets a two count.  Green gets sent out of the ring again, and Jennacide nails with a boot to corner for a pin to King, but only gets two count.  King gets Jennacide with a middle rope knee strike, but Green blindsides with a forearm to get sent out of the ring.  Green goes on the ring apron and launches for a crossbody, but both women catch her and send back in the ring.  King and Jennacide jockey for position get back in.  King knocks down Jennacide, but Green gets back in control, as she gets a curb stomp to the bottom turnbuckle and them gets a camel clutch (best quote of the night is Galli saying that Green’s going to “Make her humble.”  Thanks for the Iron Sheik reference!) but Jennacide sneaks up from behind and has Green in a sleeper hold.  She gets Green in a fireman’s carry, but a King front kick knocks both women down.  King gets a cutter to Jennacide, but Green comes back with a neckbreaker, and the Cyborg returns back with a TKO.  King goes to pin, but Jennacide breaks it up with a slam and, Green break pin.  She sends Jennacide out of the ring and King gets Green in the Excali-buster for the three count.

Your Winner and the Number One Contender for the NWA Women’s Championship:  KiLynn King

This is a huge deal, as King is showing more promise in the NWA than she did in AEW, and It’ll be interesting how she will fare in competition with Kamille.

But we will speculate on that for another day, as it is time for the Main Event, and it is a… 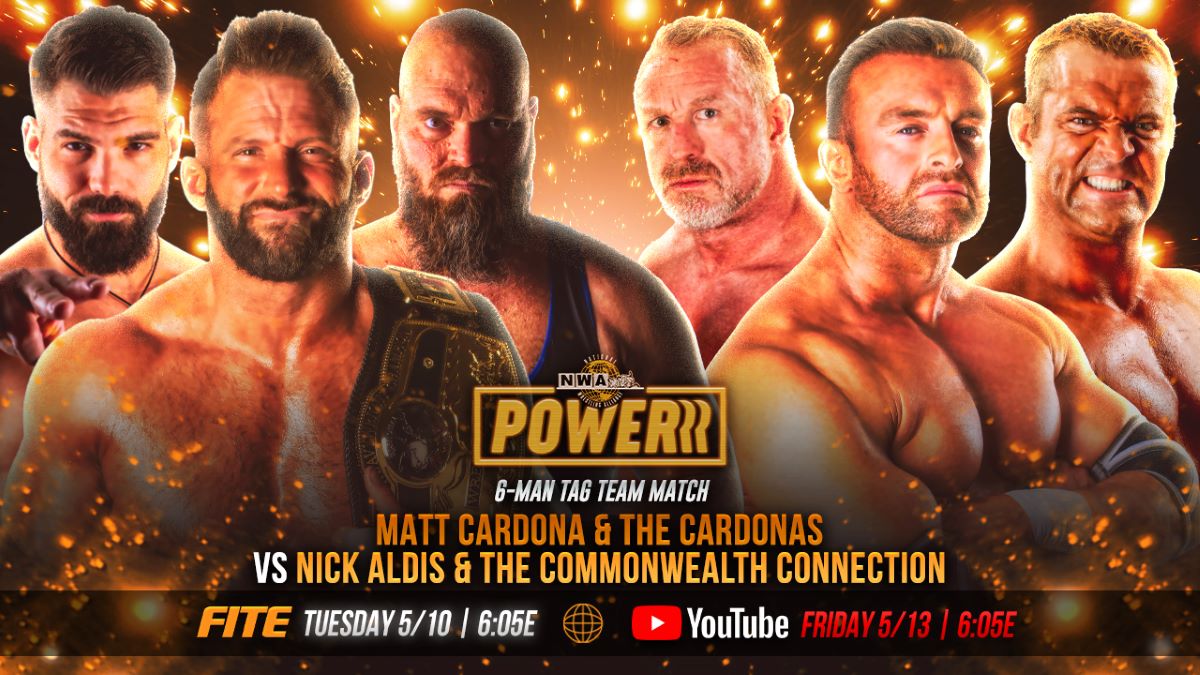 As Cardona enters the ring clutching the Ten Pounds of Gold, chants of “You Tapped Out” from the fans greet the champ.  Williams stars off against VSK, and The Ambassador puts on a wrestling clinic.  VSK manages to get him to the Cardona corner, and Knox tags in to overpower Williams, but Williams is able to outwrestle the brute.  He tags Aldis in, and Knox gets Cardona in for a split second before getting Knox back in the ring.  Aldis tags Smith, and both powerhouses thunder away at each other, but Smith gets a nice delayed vertical suplex for a two count.  He tags back in Williams and The Commonwealth Connection produce some fluid double team action, with Williams getting a corner splash, sending to Smith for a powerslam, and then Smith assisting Williams with a senton to a pin, but gets a two count.

VSK and Knox are doing the lions share of the work in the ring, while protecting the champ, to Aldis’ dismay.  Smith gets isolated by The Cardonas, thus making him a Bulldog in Peril.  Green makes her presence known on the outside by choking on Smith as the ref is distracted.  Now Cardona gets in to add a few licks of his own, but Smith fights his way out for a hot tag and Aldis is a Dealer en Fuego.  The match becomes total pandemonium, but Aldis gets Cardona slammed to the mat and goes for the Kingslayer submission, but VSK chop blocks his leg.  As Cardona escapes, VSK goes up top to a missile dropkick, but Aldis sidesteps and locks in the Kingslayer and he’s got no choice but to tap out.

Your Winners via Submission:  Nick Aldis and The Commonwealth Connection

The Brits stand tall, and Aldis promises to Cardona the belt will be his as the show goes to credits.

The siz-man tag match was a barn burner, and adds more fuel to the rivalry between Aldis and Cardona.  The Three-way match with King, Green, and Jennacide was also fantastic, and showcases the athgleticism of the women’s division.  As for The Tag match with the Miserably Faithful and The Dirty Sexy Boys…I want this as a feud.  I don’t care how;  just book it.