Raw report: Judgment Day and a returning favourite balance the scales of a so-so show 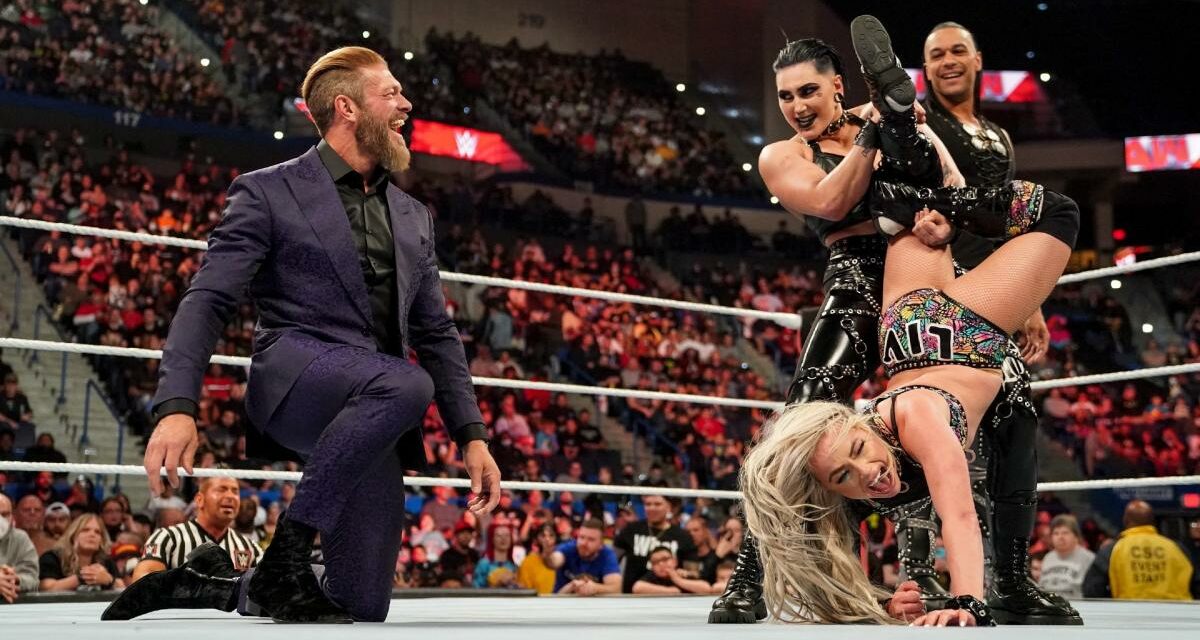 The state of disposable storytelling in the WWE is summed up in the first moments of Raw, as Randy Orton and Matt Riddle make their entrance smiling and not acting at all like they lost in a “massive” main event at last night’s WrestleMania Backlash. Why would they look so happy after such an outcome? Because the match didn’t matter, and carries no long-term consequences.

Instead, RK-Bro will focus on something that at least should matter: a title defence against The Street Profits tonight. First, though, Orton and Riddle are in the ring and are proposing, guess what: a tag team unification battle against The Usos. Riddle takes a few moments to praise his partner’s legacy, but Angelo Dawkins and Montez Ford interrupt and join them in the ring, warning the champs not to look past them.

Ford and Riddle open by trading roll-ups, and then mocking pats on the head. Ford targets Riddle’s chest with a dropkick before Dawkins enters with a shoulder block. Moments later, Orton is into the match to beat on Dawkins for a bit, tag Riddle in and help him perform a corkscrew moonsault, then Orton goes to the apron where he usually stays until the very end of the match.

Dawkins fights Riddle to the floor, but Ford, who had tagged in blindly, does his super hero dive over the top rope before a break. Coming back, Riddle is taking his customary punishment before falling into a tag to Orton. Scoop slams, hangman’s DDT, but Dawkins pushes out of an RKO attempt, once again bringing in Riddle. With Dawkins and Orton on the floor, Riddle launches a springboard, corkscrew splash but hits Orton by mistake. The Profits send Riddle back into the ring for a frog splash but Orton breaks up the subsequent pin. 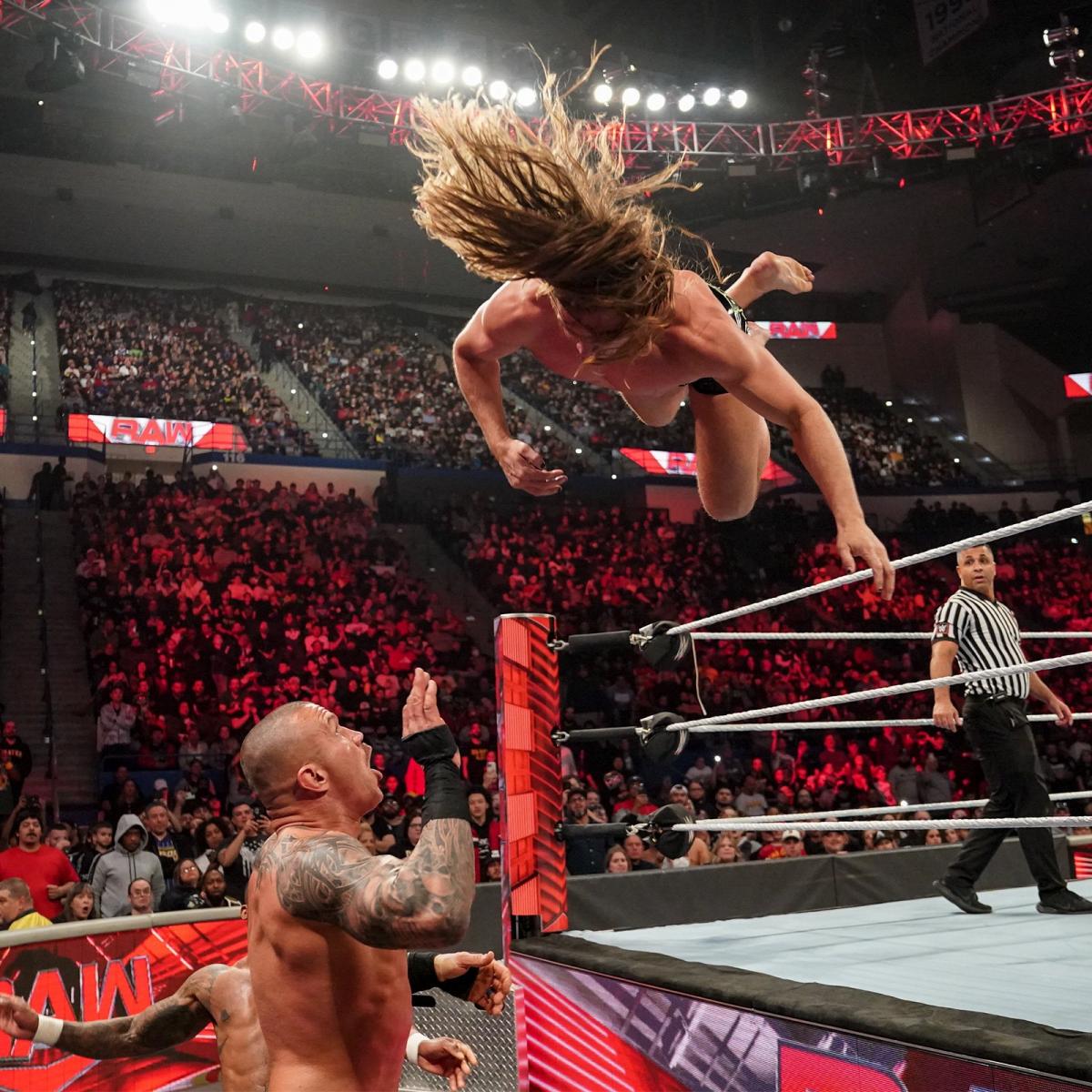 RK-Bruh-Oh! Riddle nearly costs his team the match and the titles with this mistake. Photo: WWE

Ford sets up for another splash, but Riddle leaps up to hit an RKO on his descending opponent for the successful defense.

Ahead of tonight’s Unites States Championship title match, Kevin Patrick welcomes Austin Theory for a preview of the match. Theory says he has no need to prepare for the match and simply oozes confidence.

Next up for a little chat is Judgment Day with the freshly shorn Edge, Damian Priest, and their new member Rhea Ripley. Edge goes for the low hanging fruit and lays plenty of smack on the Hartford, Connecticut crowd, and leaves the task of officially introducing Ripley to Priest. She bemoans pandering to the fans and says she is going to finish up her business with Liv Morgan tonight.

Edge wraps up by promising that Judgment Day is looking for more, but Morgan is done waiting and heads to the ring for the match.

Ripley endures several punches before headbutting and tossing Morgan around at will. Morgan, perched up for a superplex but seemingly more concerned with getting her hair out of her face than escaping the move, nonetheless counters with a hurricanrana before falling to a big boot to the face.

Edge and Priest are having a great time watching with big smiles on their faces as Ripley locks in a body scissors, yelling at Morgan that she’s pathetic.  Liv does escape a Riptide and hits a Jersey Codebreaker but only gets a two-count. Another kick to the face by Ripley puts her in position to hoist Morgan up in an inverted cloverleaf for the win.

Edge and Priest join Morgan in the ring, and the Judgment Day leader nods to Ripley to re-apply to the submission hold, and after Morgan screams in agony once again Finn Balor enters (alongside AJ Styles) for the next singles match.

I like the time-saving aspect of having successive matches featuring members of a faction. Priest opens strong with strike after strike, but Balor fights back with a low dropkick. Priest regains control and holds Balor in a lengthy headlock before another low dropkick brings Priest down. A Sling Blade soon follows, and Balor looks to dive through the ropes out to Priest on the floor only to stop when he sees Ripley in the way.

Edge, having apparently seen enough, enters the ring and spears Balor for the easy disqualification call.

The fight continues with everybody in the ring and ultimately a spear for Styles.

Backstage, Chad Gable is with Otis, telling Kevin Owens that he sent off the red cup he took from Ezekiel and sent it to his friends at the DNA lab. Owens, wearing a Dusty Rhodes shirt, is very impressed that Gable has friends at “the” DNA lab, and he also loves that this will help him trap Ezekiel in his lie and expose him as Elias.

Even more exciting, according to Owens, is the fact that his older brother Ken, famous for winning the Grand Prix wrestling tournament in Nova Scotia three times, is here tonight to wrestle Ezekiel. I didn’t know that Owens had an older brother…

The next segment features The MVP Lounge, with MVP (alongside Omos) knocking Bobby Lashley until Cedric Alexander arrives and keeps trying to get himself involved with some kind of Hurt Business 2.0. MVP is not interested, and Lashley is out next tearing through security and tossing Alexander aside. Omos and MVP escape the ring, so Lashley continues his assault on Alexander.

As Deville awaits her opponent, Adam Pearce steps out and announces that the formal investigation into her professional conduct has found her unfit for employment as a WWE official. With Deville in shock, her opponent is announced: Alexa Bliss, still toting Lillie but looking more like her old “Goddess” self.

A DDT by Bliss opens on the stunned Deville, and she follows with Twisted Bliss for the easy win. 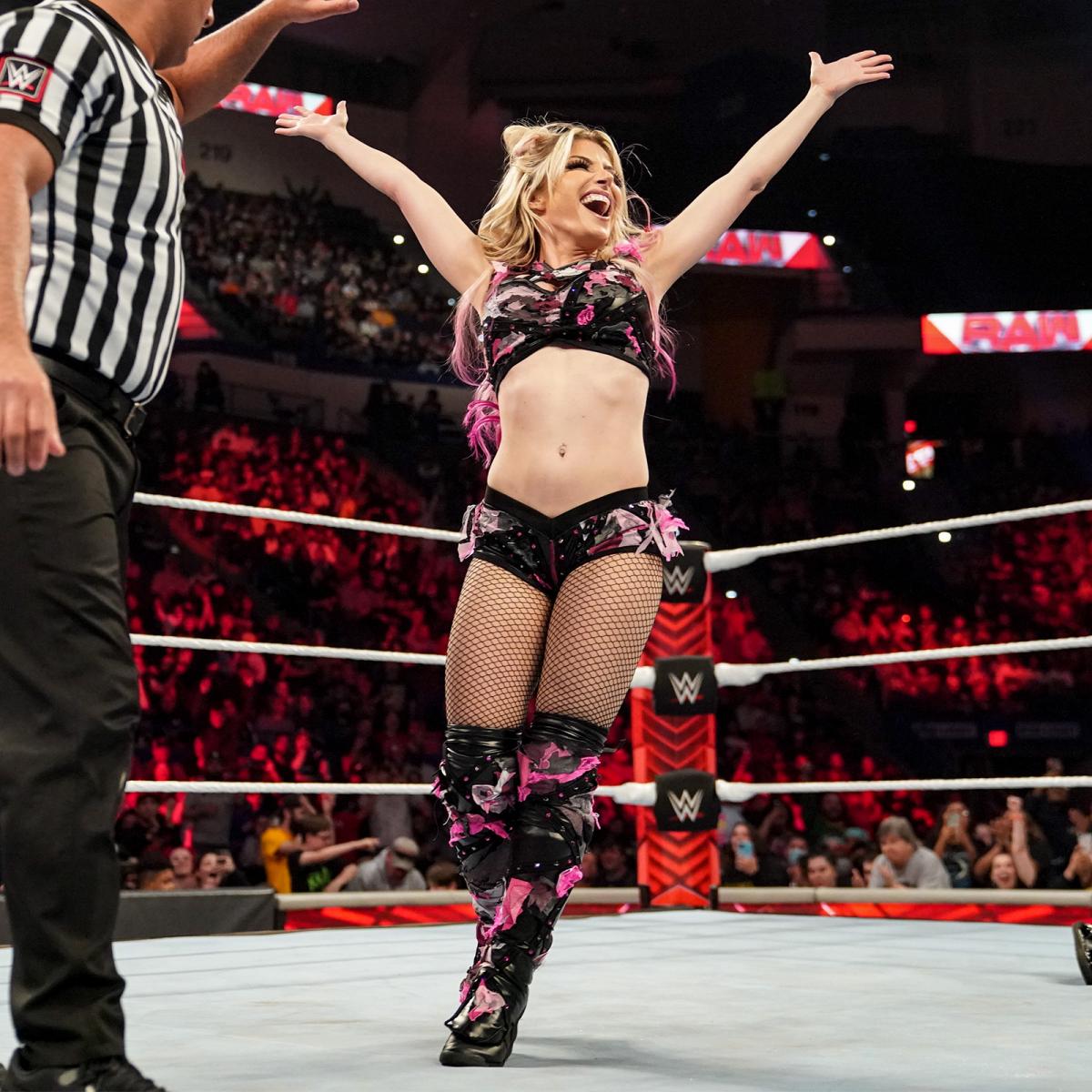 Bliss looks as happy to be back as the crowd was happy to see her again. Photo: WWE

Next up in the identity saga, Ken Owens enters to join Ezekiel in the ring. Coming in to Kevin Owens’ theme, sporting a Kevin Owens t-shirt, and some grey hair with a wig and a dyed beard, Ken looks very familiar. Ezekiel seems content to introduce himself to Ken, but Owens’ frustration boils over and he admits he’s just Kevin before attacking his new nemesis. The Alpha Academy arrives to help and Ezekiel takes a stunner. 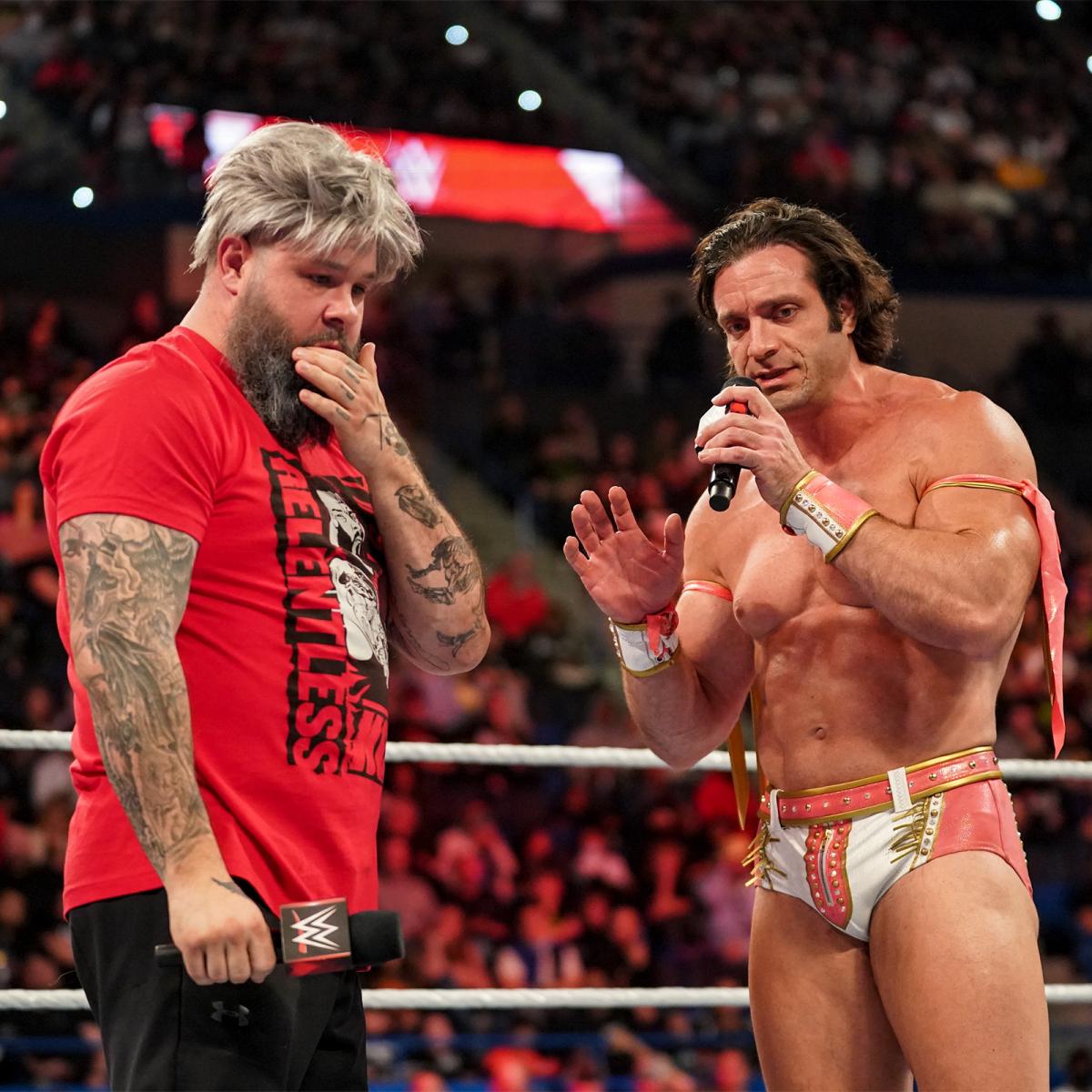 Is Ken Owens experiencing doubt about his own identity? Photo: WWE

Byron Saxton is in the ring, as he was last week before Mahaan’s match, with the local talent who looks like a jacked-up Bryan Danielson. Seriously, he looks like what Vince probably wishes Daniel Bryan could have been.

Roman hits a big boot, but a sidewalk slam and clothesline lead to the cervical clutch for another quick win.

Kevin Patrick is backstage with Cody Rhodes as he prepares to make his entrance for his U.S. title match. Rhodes says that he hopes he’s finished with Seth Rollins.

Theory sets the tone by driving Rhodes to the mat in the early moments, posing atop of the downed Rhodes. Cody responds with a pair of uppercuts, but Theory uses a rolling dropkick to regain control. An elbow to the face brings Rhodes to the mat again, and Theory tries an arrogant cover for barely a one-count.  A front-suplex sends Theory to the floor where he angrily clears off the announcer’s table before a break.

Coming back, a double cross-body knocks both wrestlers down, but Rhodes recovers first to land a top-rope moonsault followed by a Beautiful Disaster kick and a Cody Cutter. As Rhodes zeroes in on the victory, Seth Rollins slides in the ring and attacks Rhodes to bring the match to an end.

Rollins continues the assault after the bell, eventually stomping Rhodes’ head into the announcer’s table.

Naomi, sporting a bullseye tape-job on her left arm, starts off against Doudrop who brings the champ down with a headbutt. Naomi tries a sunset flip, but Doudrop simply sits on her for a two-count. A corner splash from Doudrops makes matters worse for Naomi, but she makes a tag to Banks who inadvisedly tries a top-rope crossbody coming in, as Doudrop simply catches and slams her.

Nikki tags in and, though Doudrop wants back in, she refuses to tag and instead suffers the tag champs’ unnamed double-team finisher.

After the bell, Doudrop begins berating Nikki for the loss but The Miz’s music cues up the next segment.

Miz makes his mark early as he steps between Ciampa and Ali in the corner, allowing Tommaso to cheap shot Ali and kick him down in the opposite corner. Ciampa knees Ali to the floor and follows with a strong clothesline, perching up on the announcer’s table and applauding himself. As the wrestlers return to the ring, Ali tries a roll-up but Miz is awfully slow to start the count, allowing Ciampa to kick out easily.

Ali finds some life with a clothesline, dropkicking Ciampa in the corner and following with a rolling neckbreaker, and a tornado DDT followed by a very slow count by Miz. As Ali argues, Ciampa hits an inverted DDT and Miz counts the pinfall very quickly. 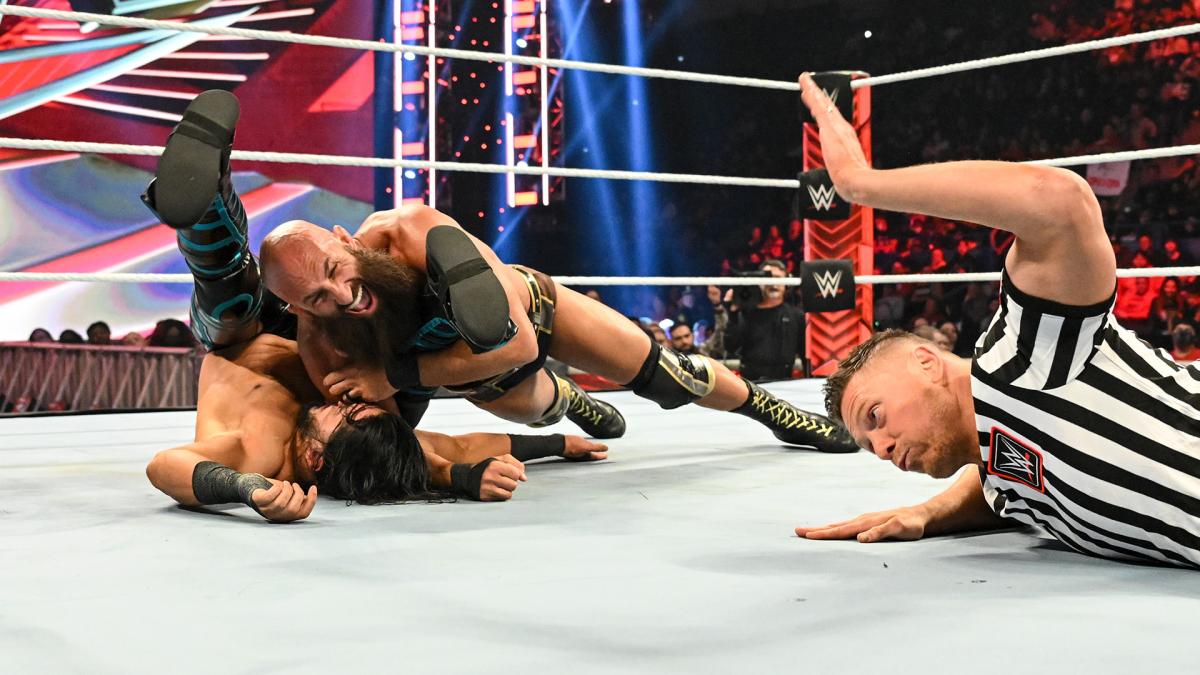 In a shocking turn of events, The Miz is not an impartial referee. Photo: WWE

Lacey Evans shares her story of a difficult, abusive family upbringing, leading to her time in amateur wrestling and the Marines. She shares the story of her father’s overdose just before her WWE tryout and details the hardships she has endured to become the woman she is today. Big, big babyface push — we’ll see how that goes.

After a break, Lashley challenges Omos to another match for next week’s Raw, this time in a steel cage. Elsewhere, R-Truth is with Dana Brooke and Tamina who are looking to annul their marriages with Tozawa and Reggie. Heartbreaking.

By the time all of the entrances are finished, including that of Becky Lynch who joins the commentary, there are about five minutes left in the broadcast for this match. Yikes … give these WWE superstars a chance.

Asuka and Belair spin around each other trying to gain the upper hand, which Belair finally does with a hard shove. Asuka responds with a low-knee to Belair’s face, soon after locking in an armbar which Belair powers out of.  However, as we’re running out of time, Lynch brings the match to an abrupt halt, attacking both Asuka and Belair.

What’s good is good: Judgment Day and Owens/Ezekiel, and having Bliss back is a potentially big plus. Championship Contender’s matches are, and have always been by any other name, silly. Cut those out and trim some of the entrances and you’ll have a pretty good two-hour show. Until then, it’s another so-so episode of Raw.