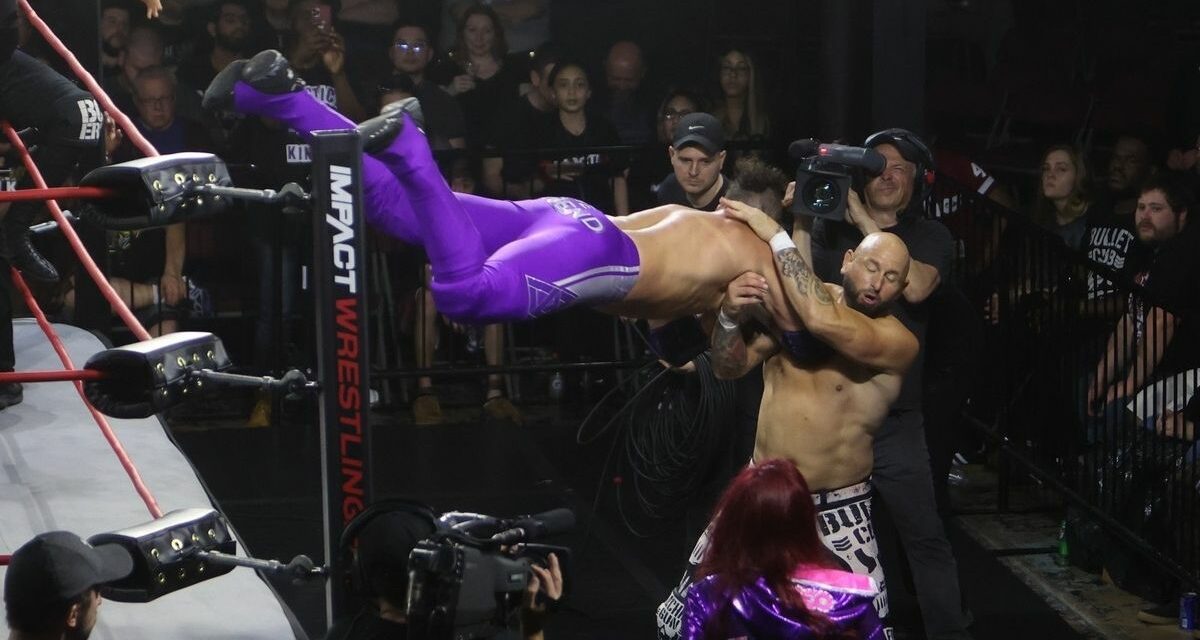 Greetings and salutations everyone and welcome to this weeks Impact TV report. This week Impact was back at the 2300 arena. This the go-home show before this Saturday’s Rebellion PPV (on Fite TV and PPV). Be sure to check out Slam’s official picks later on Friday April 22. Without further ado, lets get to it.

Decay vs Violence by Design

With Rebellion literally around the corner and Violent By Design defending their Tag Titles in a Scramble Match, Decay is hoping to make an Impact (pun intended) before Saturday’s show.

Taurus started that match along with Deaner but Eric Young made his presence known quickly by attacking Taurus and cutting the ring in half. 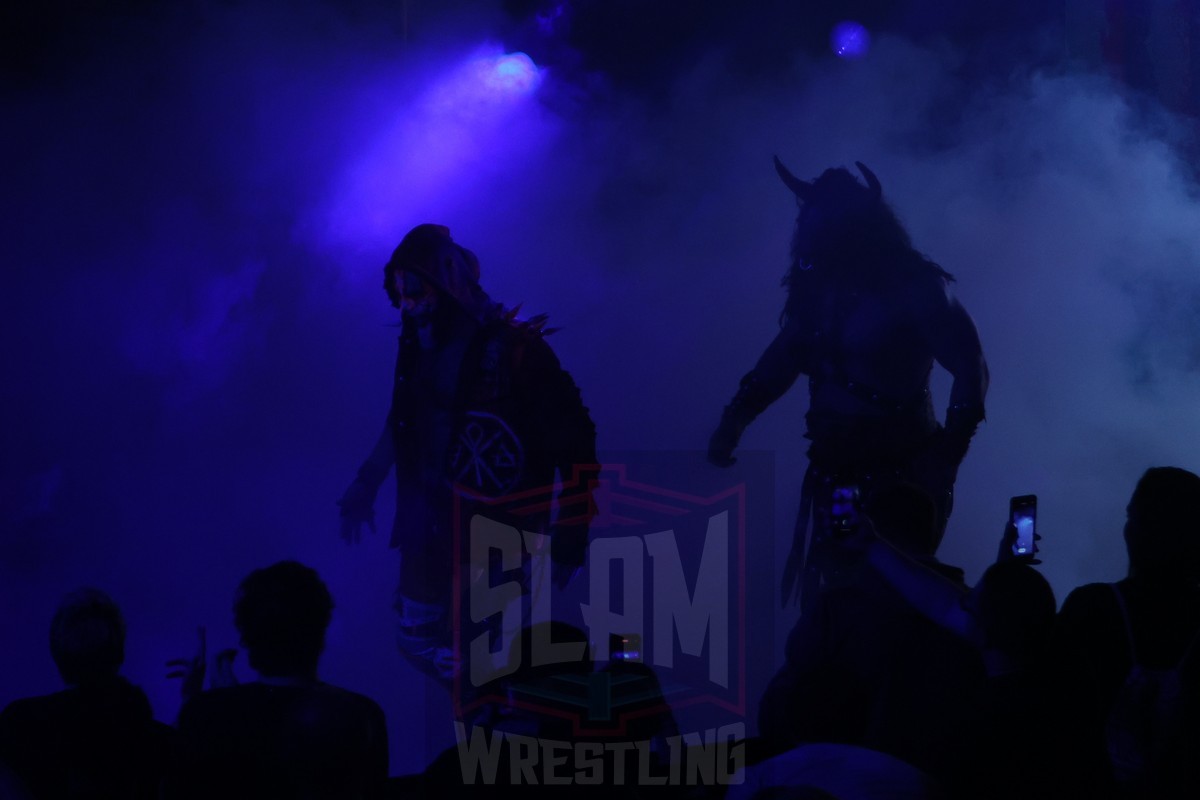 Decay make their entrance on Impact Wrestling, airing on April 21, 2022, taped in Philadelphia at the 2300 Arena. Photo by George Tahinos, https://georgetahinos.smugmug.com

Steve eventually went into the ring and worked over on Deaner for a bit of time. Steve began to attack the neck of Deaner by biting it and his ear. Steve hit a twisting Pepsi Plunge but Young cut the pin as he dove in for the save.

Young was able to make his presence known as he broke up a Flag Post on Steve’s back for a Deaner DDT which was also able to get the pin. Overall this match was entertaining but fast.

We are shown a detailed video package showing the history of Josh Alexander vs Moose.

Decay is seen tending to Taurus as he appeared injured after his match with Violent By Design when all of a sudden Tasha Steelz and Savannah Evans attacked Rosemary and Havok.

Matt Cordona, Chelsea Green, and Brian Myers are out to the ring. Cordona called himself the “Deathmatch King” so it was fitting that they are in the 2300 Arena. He then talked about being the Digital Media Champion and has aspirations to be the Tag Team Champion along with his best friend, Brian Myers.

Myers spoke next and he said that they are now on the same page and no one can stop them.

Green talked next and she said that while the three of them are great champions around the world on their own, they will be a stronger unit together and no one would be able to stop them.

Guido Mariato and Tony Mamaluke make their entrance in the 2300 Arena (SURE!). They say that they paved the road for Myers and Cordona. There was a bit of back and forth talking and then Little Guido Mariato challenged Myers to a Digitial Media Championship match. Cordona accepted and here we go!

The match started after Cordona couldn’t get one up on the wisest guy himself, Little Guido. Mariato got a bit of offence to start the match as he took down Cordona to the mat. After some quick back and forth, both men got a few roll up attempts to keep the match going.

Myers distracted the referee and Cordona connected with a low blow on Little Guido. Corodona begins to take full control of Little Guido and taunts him at any point he can. 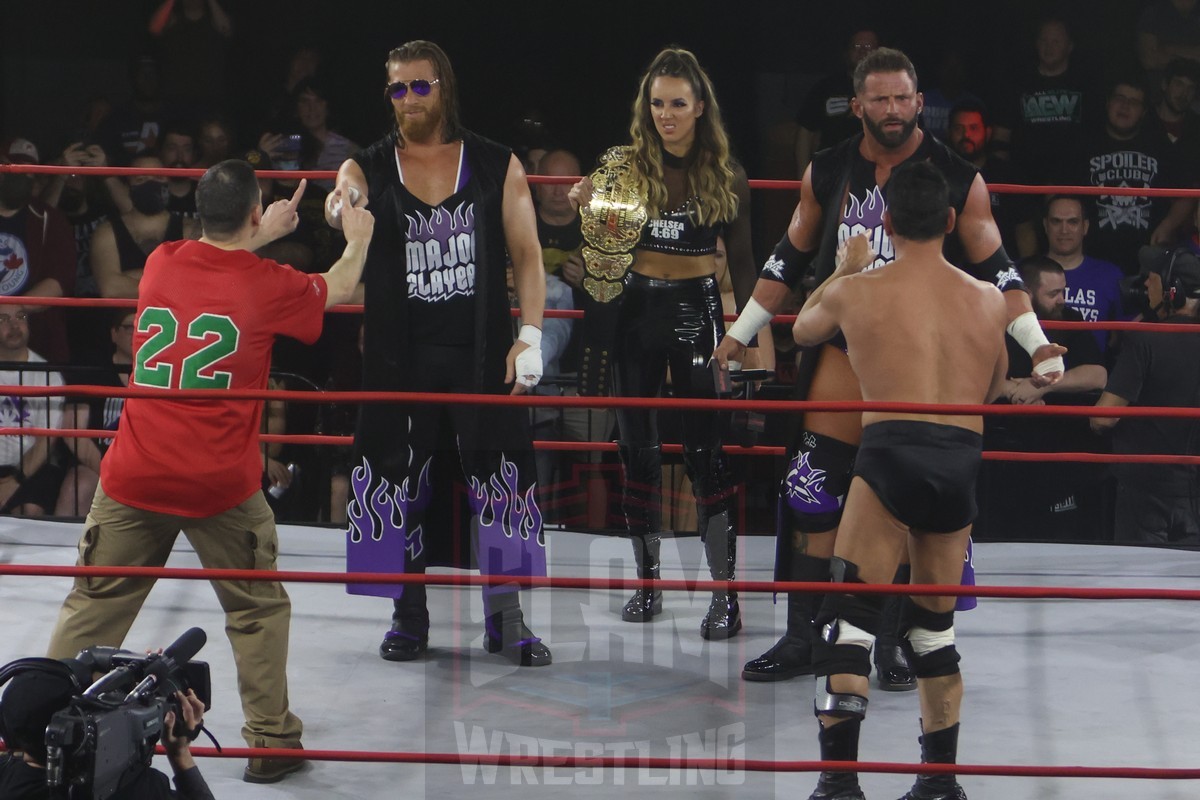 Cordona then hit a Re-Boot to Little Guido. After some more brutal looking offence from Cordona, Little Guido attempted a Sicilian Slide but Cordona didn’t stay down. He low blows Little Guido again, this time he goes for and hits the Radio Silence and gets the win.

After the match, Myers joins on the on the attack of F.B.I. They are signaling to put Litle Guido through a table but W. Morrisey comes out to make the timely save. Green landed a low blow to Morrisey but Jordynne Grace came out for a save of her own to even the numbers a bit. Grace and Morrisey eventually choke clam Cordona through a table. 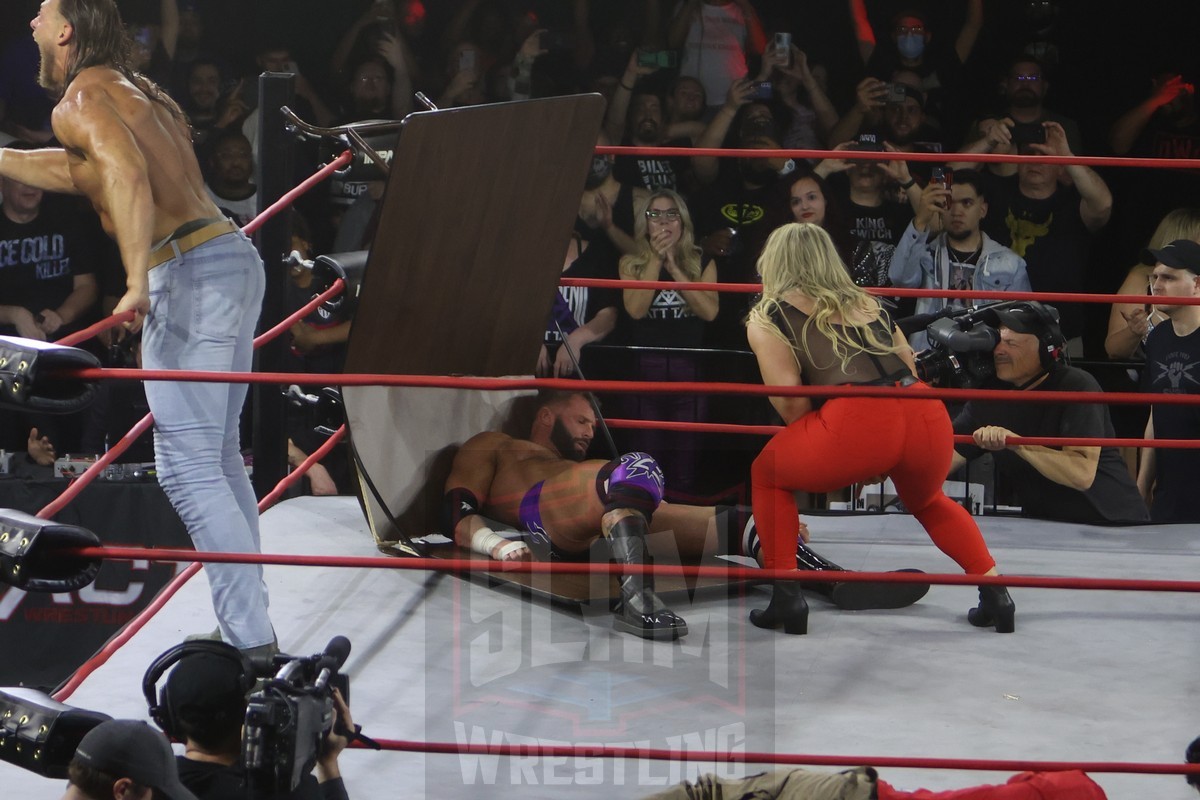 Honor No More are in the back as Edwards talks about teaching a lesson to Jonathan Gresham at Rebellion. Taven and Bennet then claim that they will win the Tag Team Championship at Rebellion in the 8-Team Scramble match.

We see a promo from JONAH. He talked about finally putting PCO away for good. He then sent a warning to Ishii about putting him down at Rebellion.

This was the most squashy squash match you could have possibly put on. Shera tosses Rodriguez a but and eventually puts him away with a Lion’s Attack (Sky High).

Gia Miller is with Bhupinder Gujar and asked why he didn’t join Singh on his latest venture. Gujar said that he had no regrets and he doesn’t care much about Shera or how big he is.

Scott D’Amore is confronted by Moose. Moose is not happy with the fact he has to go out in the ring to apologize to Josh Alexander’s family. Moose claims the attack happened outside of Impact (Destiny Wrestling in Mississauga, Canada), so what is the point. Moose said he wanted security out there as he doesn’t want Alexander to blind side him.

No PCO in this match as we was taken out by JONAH last week. We saw Anderson and Vincent start the match. After a 50/50 affair, we got Gallows and Bennett pair up for a bit. The match was still a 50/50 affair when White and Taven paired up in the ring for a bit. Then, in a first time meeting ever, King and Bey went against each other. Taven came in and helped King with the ChinChecker to get Bey on their end of the ring.

Bey was isolated from his Bullet Club members as Honor No More did a series of quick tags to keep punishing him. Bey was in the ring against Taven for a bit but Anderson eventually came into the ring and was in clear control of the match until Maria distracted him which allowed the OGK (Bennet and Taven) to take control of the match. 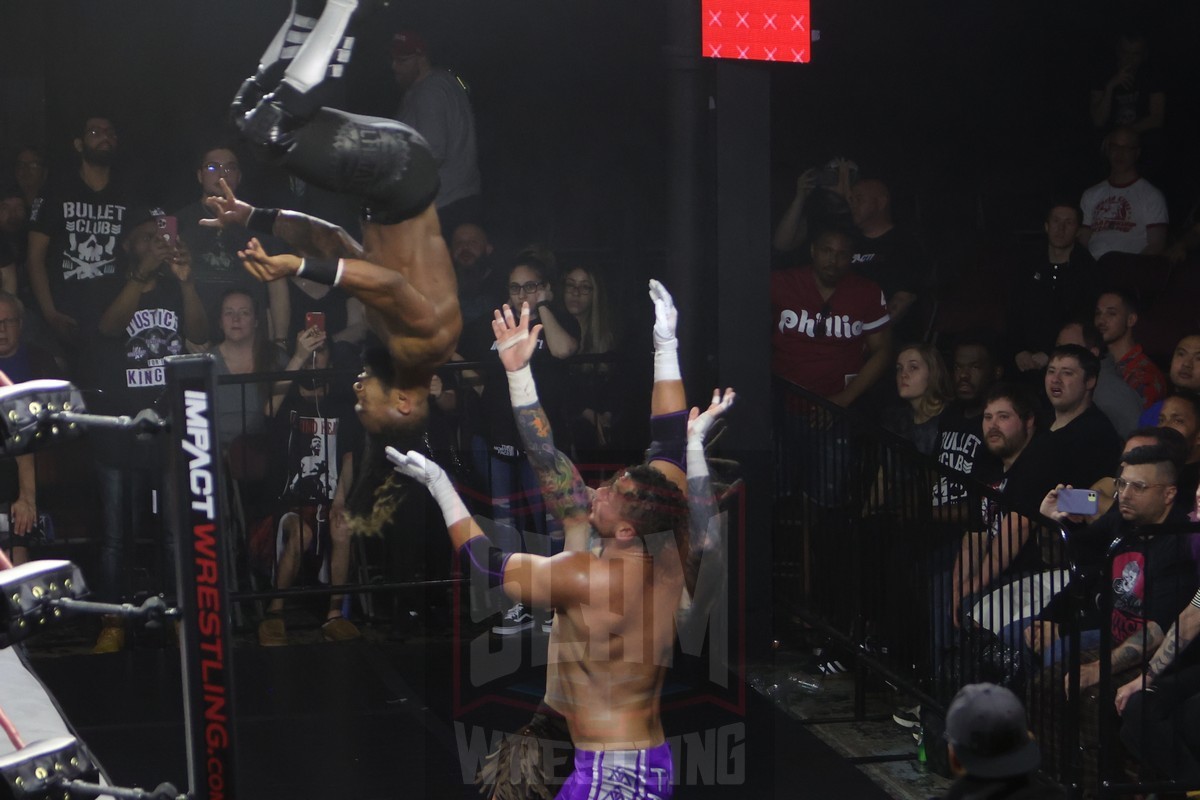 Kenny King flips out of the ring on Impact Wrestling, airing on April 21, 2022, taped in Philadelphia at the 2300 Arena. Photo by George Tahinos, https://georgetahinos.smugmug.com

OGK went for a Proton Pack on Anderson but he was able to get enough momentum in the match to get the leader of the Bullet Club, Jay White, in the match. White took out Vincent and King in very quick fashion. White was now in clear control of the match until Vincent came in. White hit a Twisting Suplex but in short order, Vincent took out White with a Russian Leg Sweep. The Good Brothers are now back in the match.

Vincent was the legal man in the ring for Honor No More when The Good Brothers went for a Magic Killer on him but was saved by Taven. King came in and delivered a Tiger Driver to Taven who was only taken out by Bey’s Art of Finesse who then immediately went for a dive to the rest of Honor No More (Pictured above). The Good Brothers were left alone in the ring with Bennet. The Good brothers hit a Gunstun and a Magic Killer for the eventual win. 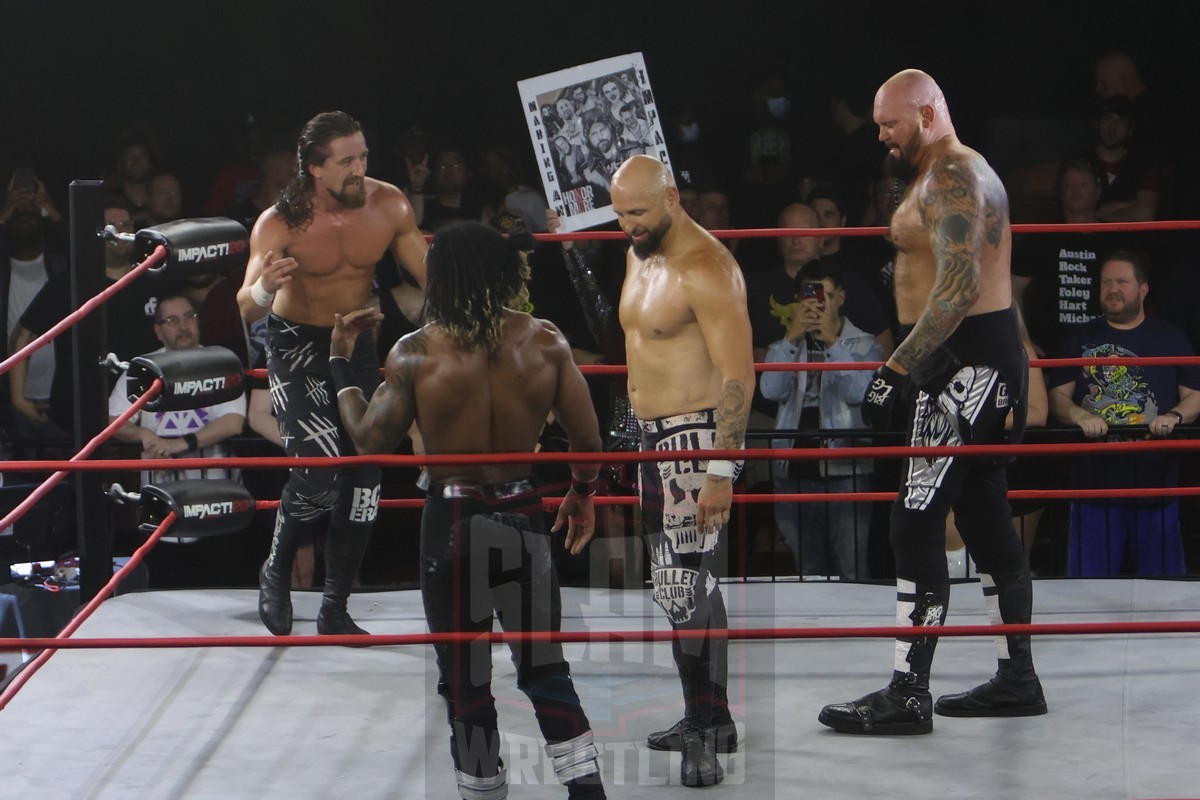 Bullet Club is pleased on Impact Wrestling, airing on April 21, 2022, taped in Philadelphia at the 2300 Arena. Photo by George Tahinos, https://georgetahinos.smugmug.com

Steve Maclin cut a promo on Jay White and Chris Sabin. Maclin said that the only reason they ever beat him was because of their tag team partners. Maclin said that without their partners out at Rebellion, they won’t stand a chance against him.

The IInspiration were signing some autographs when they cut a promo reminding us that they sent Kaleb away since he was useless to them now. Now they can focus on being two-time Knockout Tag Team Champions

Taya Valkyrie said she never actually lost the Reina de Reinas title. She put over the title and said that the title and match at Rebellion mean a lot to her.

Austin interrupted Bailey’s entrace before the match….CAN THEY CO-EXIST?!?!??!!

Miguel and Austin started the match. The match was fairly fast paced as both men exchanged counters and reversals. Bailey and Kid were then in the match and it was VERY FAST PACED. Kid with his Lucha background and Bailey with his Martial Arts background made for a very interesting combination. Kid went for a very dangerous looking tope suicida on Bailey.

Once both men eventually made it back into the ring, Austin inserted himself into the match to face off against Trey Miguel. Miguel got the momentum but Bailey helped Austin to take control of the match again.   Bailey hit the moonsault knees, but Kid came back to amke the save all while taking Bailey out. Austin went for the Fold on Miguel, but the latter reversed into a cheap roll up and got the win! 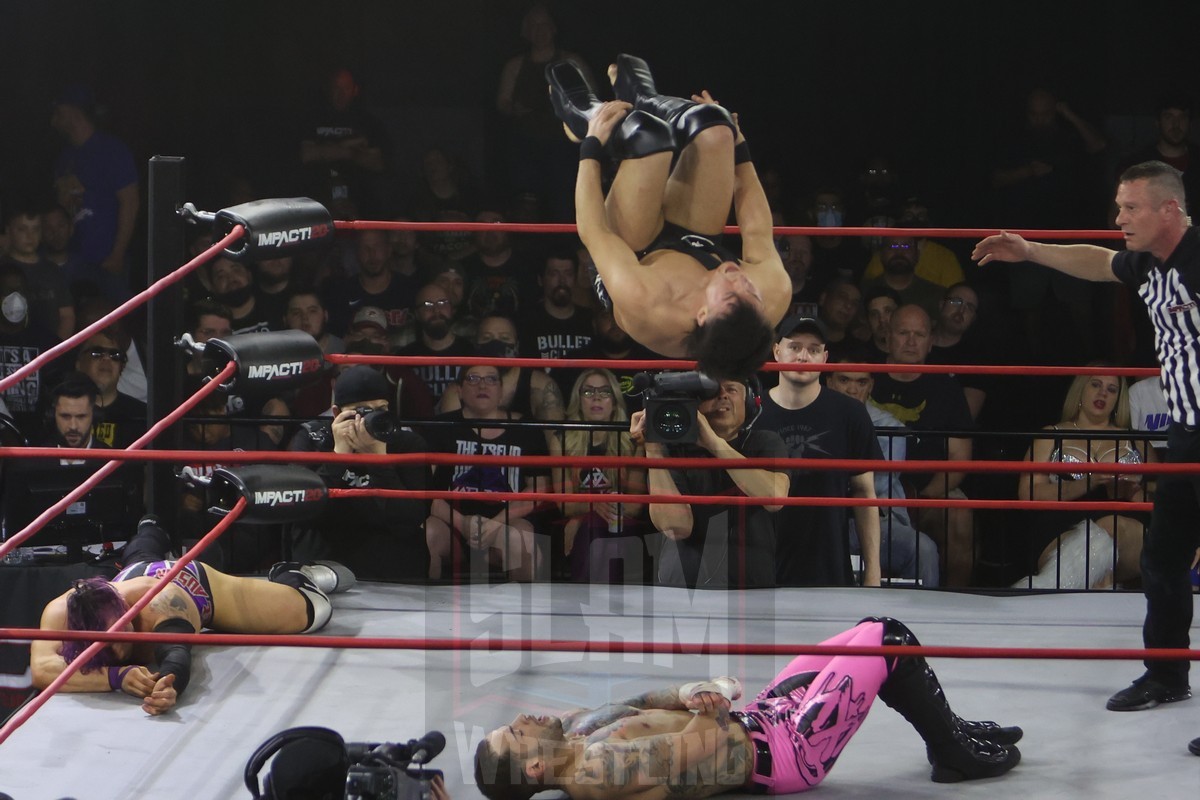 Mike Bailey flips onto Laredo Kid on Impact Wrestling, airing on April 21, 2022, taped in Philadelphia at the 2300 Arena. Photo by George Tahinos, https://georgetahinos.smugmug.com

After the match, Austin attacked Miguel. He lifts Miguel up and orders Bailey to delivery a kick to the head. Bailey instead gives a lethal kick to Austin. This set up the triple thread match between Miguel, Bailey, and Austin really well.

Honor No More have another promo in the back where they each put over the group and themselves. Vincent then said that he had business to attend to as he walked into the garage and grabbed a pair of Jumper Cables. Vincent walked out of the 2300 Arena and into some dingy garage. We see a Frankenstein like image. Vincent Connects the cables to a power source and PCO rises from the dead once again!

Moose is in the ring which so happens to be surrounded by security. RD Evans is representing Moose tonight and he reads a prepared statement from Moose. As he reads the statement, Moose stops him, takes the mic and said that he was sorry for showing how much of a loser Josh Alexander really was. Moose asked who allows for their wife to get hurt in front of their kids? Moose is sorry for showing Alexander’s kids that he is no hero. Moose lastly apologized for the ass-whooping he’s going to give Alexander on Saturday.

Alexander eventually came down to the ring huffing and puffing. Alexander took out any of the faux security they had set up. D’Amore moved out of the way to allow Alexander and Moose confront each other.

Both men brawled and Moose landed a pair of big uranages, but when Moose tried to do it through a table, Alexander fought back and hit the C4 spike through the table instead. Alexander is standing tall as the show fades to black! 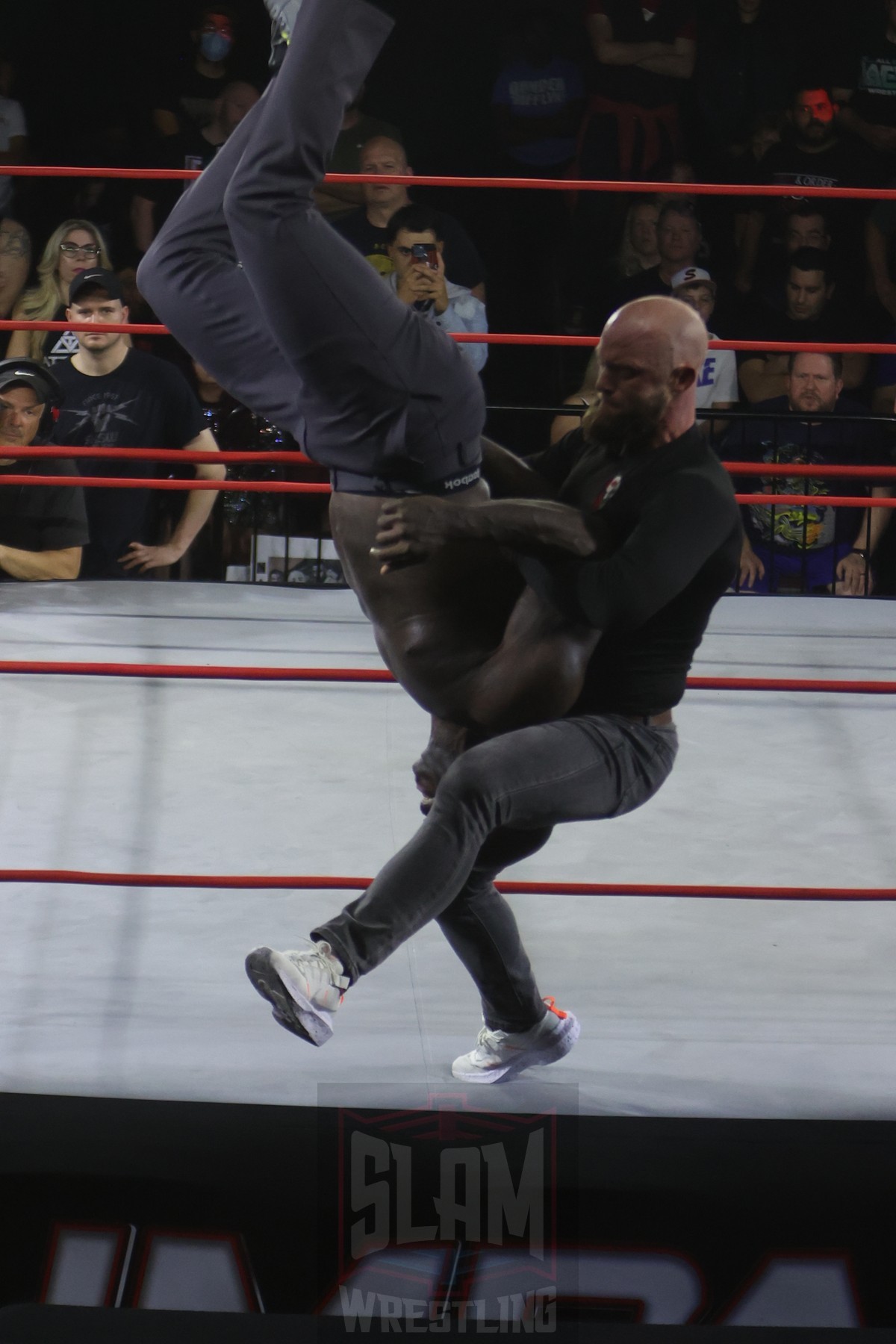 Josh Alexander piledrives Moose on the ring apron on Impact Wrestling, airing on April 21, 2022, taped in Philadelphia at the 2300 Arena. Photo by George Tahinos, https://georgetahinos.smugmug.com

This show was fairly good. We had some good in-ring set up for the PPV on Saturday. The Bullet Club/Honor No More feud is getting quite interesting.

The X-Division match will be fun as Trey Miguel, Mike Bailey, and Ace Austin are sure to put on a clinic. The mini-angle they ran at the end of their match on this edition of TV was well done also.

I wish they put some more focus on Tasha Steelz as Deonna Purrazo is really feeling like the #1 Woman on the roster.

Josh Alexander and Moose. What else can we say? This match has been building since October and we are just days away! All-in-all, an effective go-home show before a PPV.