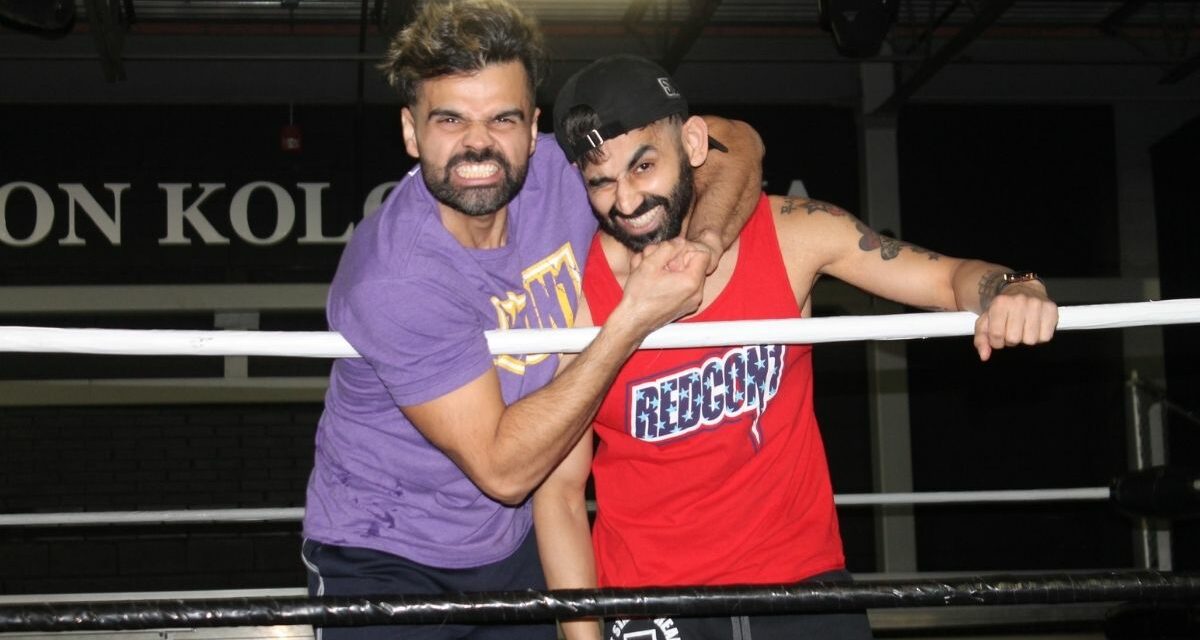 The Bollywood Boyz, Harv and Gurv Sihra, are a bit of an oddity. They went from the indy wrestling scene to WWE, skipping the NXT developmental brand, and instead debuting on the 205 Live show, before getting called up to the main roster as flunkies for Jinder Mahal.

Released on June 21, 2021, they are now back on the indy scene, picking and choosing where to work.

“We’re far from done. There’s so many goals and dreams that we haven’t even accomplished yet,” said Gurv Sihra in early April. “As far as where we’re going, we’ll go wherever the bookings take us, or the shows take us. But again, for us, it’s the grind back up.”
The grind is real.

Coming out of Burnaby, British Columbia, a suburb of Vancouver, the brothers broke into wrestling in 2004-05, after training with Bruce Hart in Calgary, and then Vancouver names such as Vance Nevada and Michelle Starr. They furthered their education where they could, seeking lessons from greats such as Harley Race and Rip Rogers, and making contacts at events like the Cauliflower Alley Club reunion.

It was at a CAC reunion in Las Vegas where they first met Bret “Hitman” Hart, who has been one of their biggest supporters. The Sihras sat with Hart for hours, absorbing lessons.

They are quick to say thank you to those who helped along the way. “We’ve been very lucky that we’ve been mentored and guided by some of the greatest men that we grew up watching as kids like, Bret, Edge, even Shawn Michaels at the PC, all these connections that we created over the years, because we were so appreciative of having that opportunity to finally sit under their learning tree,” said Gurv.

His brother, Harv, who wrestled as Samir Singh, joined the conversation partway through, just as Gurv was asked about any issues between the brothers from spending so much time together. Unplanned, Harv had a Hart Brothers hoodie on like Gurv had on.

“We’ll butt heads times over ideas, but there’s nothing like, ‘Oh, I don’t want to ride with you.’ It was never like that. We were both so passionate and we love what we do so much that we always,” began Gurv, as Harv jumps in.

“We only fight about wrestling,” said Harv, the younger brother.

They were even in sync over the person they felt helped them the most while in WWE – Terry Taylor.

“Terry was the guy at the PC who took a great liking to us. He was somebody that after any match we did at the Performance Center during our 205 run, or whatever it was, he always pulled us aside and gave us feedback and put the psychology behind our match and what we could have done better here, instead of this there,” said Gurv.

“Terry loved us,” added Harv, noting it was tough love. “We were so confident. We were having 12-, 15-, 16-minute TV matches. Terry would rip us apart at times. … But at times, when you have a guy like Shawn Michaels saying, ‘That was f***ing good’ and giving it a thumbs up. He doesn’t have time to bulls**t. Our confidence was at an all-time high. There’s obviously a lot of other people, but I would say, Terry.”

It was that learning tree, just many more years into their career. “You hear about the stories of the young wrestlers sitting in a car ride, driving, and then the veteran teaching, ‘Hey, maybe try this the next time you’re out.’ That’s what we got with Terry,” said Gurv. “It was one of the coolest experiences ever, and absolutely, we credit him a lot in the confidence that we have in the ring now.” The key, though, was listening and then implementing, and getting that “A-ha!” moment. 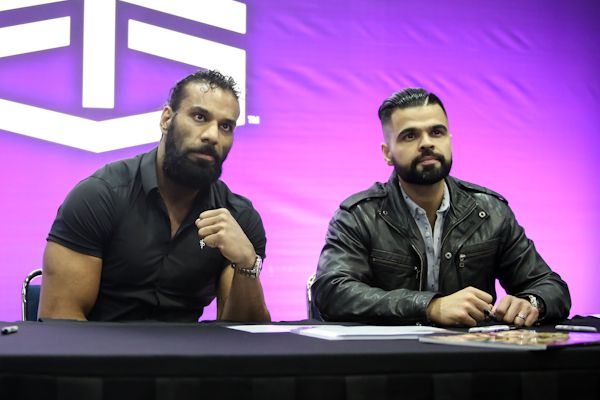 The Bollywood Boys on 205 Live were the closest to their true personalities. “We were being ourselves,” agreed Gurv. They felt free and had gotten over the nervousness that existed when they were on WWE TV as Sunil and Samir Singh, doing their best to protect Jinder Mahal (a fellow Canadian, from Calgary).

“The thing about WWE is like, once you’re there in gorilla [position, at the curtain], the nerves, it’s hard to explain, especially when you’re young and coming in and you want to live your dreams and impress all the bosses,” Harv explained. “It’s intimidating, and that’s something people don’t talk about how, if you’re standing in gorilla and you’re young, and Vince is right there, you’re like, ‘Holy sh**!’ I don’t care who you are, we all have that — ‘I could live my wildest dreams here.’ It’s intimidating.”

The run with Jinder was supposed to be short but lasted two years. They learned how to take advantage of the association.

“The bump taking that we did with Jinder, like all that stuff was us just putting ourselves out there. Because we know, when you’re outside looking in, and I want to say outside looking in when you’re you’re the heater or the manager role or whatever you want to say, the shine on you is very limited,” said Gurv. “So whatever you do, the minutes that you do, you’ve got to maximize them. So like the bumps that Randy [Orton] would give us on the announce tables, or like my brother’s fall off the Punjabi Prison, that was him pitching that idea — ‘Hey, let me come off that!’ — and take that opportunity to shine and get that five minutes of camera time just on us.”

The Boyz feel they made an impression. “If you look back years later, like four or five years later, the stuff we did with Randy is still being played, people still talk about it,” said Gurv. “There’s gifs on social media about it. So that’s just us, again, making the most of that opportunity that we were given.”

That WWE opportunity ended in June 2021, and they had survived a couple of other rounds of WWE downsizing of the roster. They also had figured out how to travel during a global pandemic. “It’s funny that we got released once the world started opening up,” mused Harv. “But we were fine during the pandemic. We’d go to the Vancouver airport and it’d be empty.”

Only a couple of weeks earlier, Gurv had separated his shoulder and they were heading in to train at the Performance Center when they got the call from the head office, in the 203 area code. “As you’re pulling up to the building to go train, and you see a 203 area code calling you and you’re like, ‘Maybe it’s travel, ‘Can you come in tomorrow?” or something,” recalled Gurv. “And then you answer the call and it is what it is.”

Then the calls and texts started coming in – Jinder Mahal, Drew McIntyre, so many others.

The Canadians found themselves in the same difficult situation as many international WWE talents – without employment by the company that sponsored their work visas, they couldn’t wrestle. It was the same for Bronson Reed, Buddy Murphy, the Illconics.

The Bollywood Boyz found a sponsor in DEFY Wrestling, run by Matt Farmer, just a simple drive across the border from Vancouver to Seattle.

“We’ve gotta give props and much love to DEFY Wrestling who called us within days of us getting released, and they took care of us, they took care of our visa situation, because obviously without a visa, we’re not going to be making a name for ourselves in the States,” said Gurv. 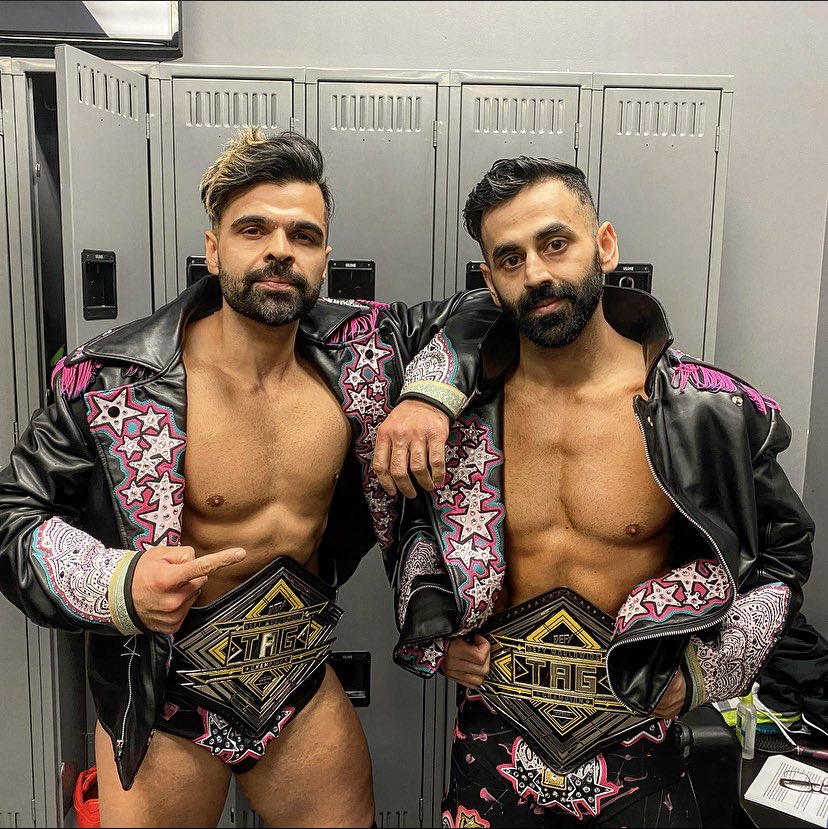 The Bollywood Boyz as Defy tag team champions in April 2022.

“It’s funny, just before we got released, DEFY was making so much buzz, we would see it on our feeds, and a lot of our friends were working there. We were like, ‘Holy crap, that’d be great,'” began Harv. “I remember the first DEFY show we did. I was like, working with WWE is obviously great, but that intimate atmosphere where they’re out, you can’t even duplicate that. And I was like, ‘Holy sh**, this is fun!’ I remember telling Gurv that. We had that ladder match, which was like, I mean, we’re not the Beatles, we’re still trying to make it, but man, I mean, that love the audience gave us in Seattle that night was …”

Gurv jumps in. “It boosts your confidence, because at the end of the day, you can be on WWE television, but people might not remember who you are. There is that 90-day thing. So when our music played, and we came out and we got the love and again, Matt Farmer and DEFY, we’ve got nothing but love for them.”

Now, as it was back in the day, they have to pick and choose where to work, just with a much higher profile. Harv has also dipped his toe into the acting world, again, and was on the recent Showtime hit Yellowjackets as a bartender.

To date, they’ve only done one convention appearance, and are open to more, but really want to wrestle. 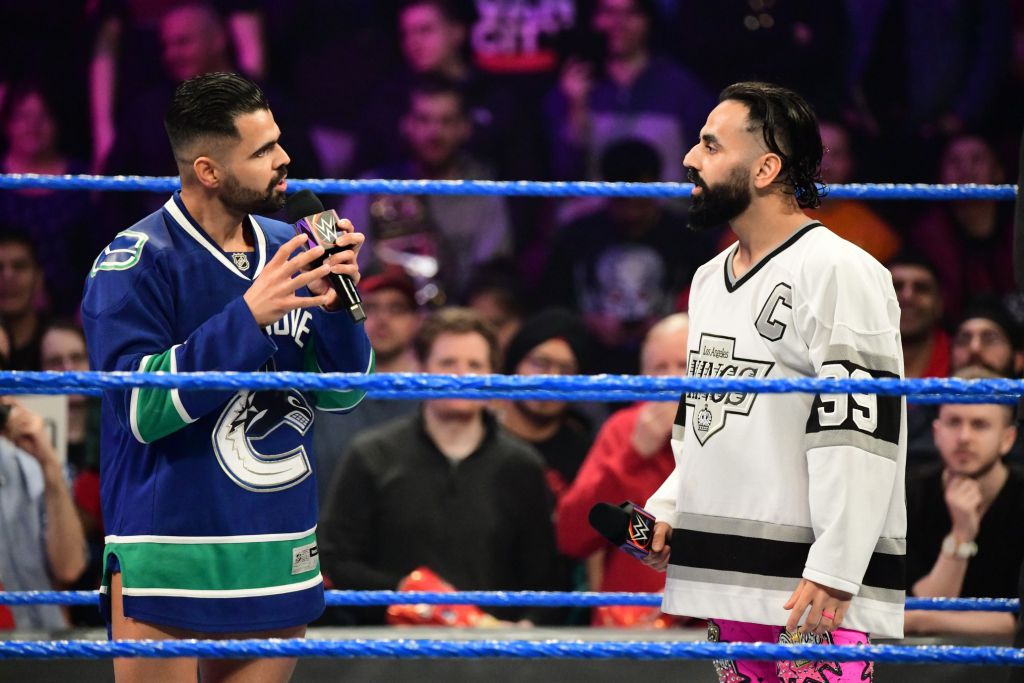 The Bollywood Boyz in the ring in Vancouver in February 2020. Photo by Mike Mastrandrea, www.mikemastrandrea.com

The Bollywood Boyz were in Toronto for a seminar, but not to listen, but to teach, followed by a Hamilton Entertainment Wrestling show.

“It’s crazy, we’re doing this seminars. Like, we have so much to do. I don’t feel like we’ve accomplished our dream, even though what we did was a dream,” chuckled Harv. “Now, we’re giving back to young guys.”

“It’s funny even to be requested for a seminar. We’re like, Man, are we at that position in our life now, that we’re the vets? Twenty years ago, you had Chi Chi Cruz, Wavell Starr, these throwback names that you haven’t probably heard in years, but they’re the unsung heroes of Canadian wrestling,” said Gurv. “I remember going to their seminars, when we were breaking out, and learning an arm drag, the Stampede arm drag, from Cheech [Chi Chi].”

They are ready for what’s next. “You don’t know who’s gonna call you tomorrow,” concluded Harv. “We can get out of this seminar and check our emails, it could be anybody — ‘Hey, we need you at this show.'”

TOP PHOTO: Gurv and Harv Sihra goof around before a seminar in Mississauga, Ontario, on April 8, 2022. Photo by Greg Oliver