NXT: Gacy in the way of Breakker 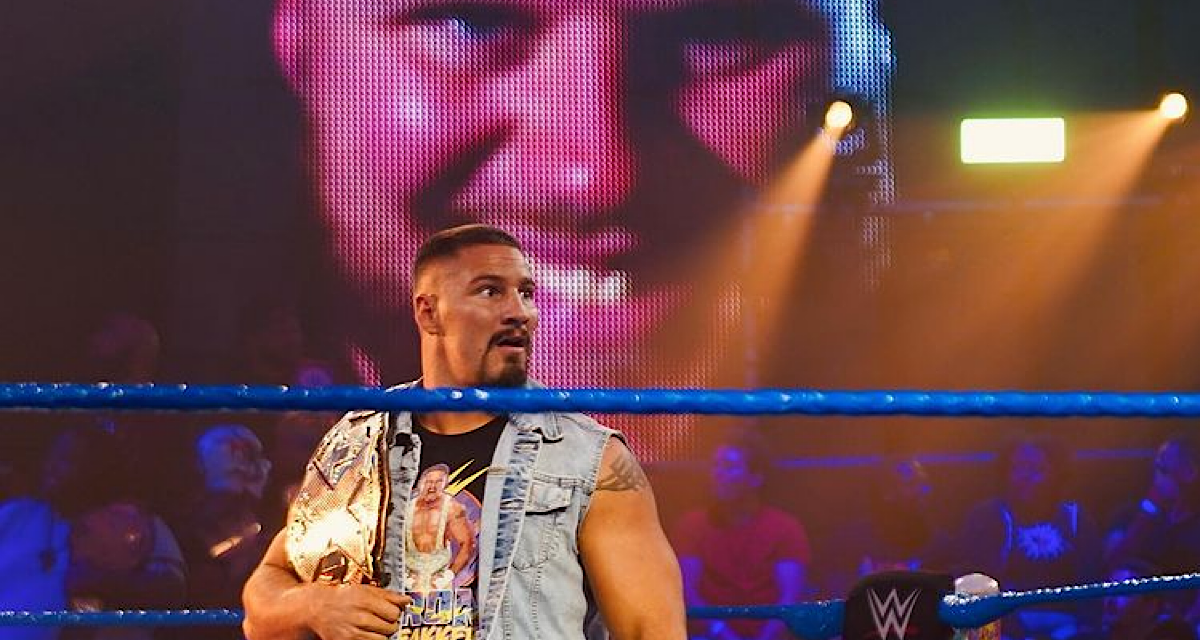 The Batman just hit HBO Max, but a discount version was shown on NXT as Bron Breakker hunted down Joe Gacy throughout the night. Even with legitimate superpowers, apparently, Gacy has nothing on the Riddler. Opening the show were the new NXT Tag Team Champions Pretty Deadly, but they were quickly interrupted by fellow Englishmen Gibson and Drake. Legado del Fantasma entered next, and the two challenging teams brawled towards the back. Out came NXT Champion Breakker to an empty ring demanding Gacy to appear – which he did by infiltrating the surrounding LED boards like a cheesy supervillain. “I’ve never seen a more chaotic start to NXT,” said commentator Vic Joseph.

It’s an opener between two of NXT’s most stereotypically derivative characters and their storyline regarding the latter’s grandmother’s necklace. Sarray attacks with dropkicks and suplexes, but her opponent escapes the offense with a “flick of the hair.” Stratton delivers the finishing splash for three in a showing that indicated future stardom rather than Sarray, who just doesn’t fit the mold.

Last Saturday in a WWE Digital Exclusive, Santos Escobar sent a message to the former North American Champion Carmelo Hayes: “You were never worthy… If you have a problem, I can remind you of your place when it comes to this championship. And that is the back of the line.” Hayes and Trick Williams responded backstage: “I created that line. I am the line,” said Hayes.

Pretty Deadly meets Persia Pirotta and Indi Hartwell backstage, and the latter duo flirts their way into a matchup for their significant others Duke Hudson and Dexter Lumis.

In a backstage interview, Waller reveals that he’s fired his insurance policy Sanga for ruining his chances at championship gold. His interview is interrupted by Andre Chase, stating that “Benjamin Franklin said it best. He that is good at making excuses, he’s seldom good at anything else.” Waller responds, “Ben Franklin? Who’d he ever beat? Listen here, Doctor Suess…” Sanga storms in, and Waller cowardly runs away to the ring. Sanga biels his opponent around, and the massive insurance policy continues the beatdown until being sent into the ringpost. Waller delivers the finishing rolling stunner to cleanly put the 6’8” heavy away. Looks like there won’t be more where that came from.

Cora Jade responds to former idol Natalya’s attack last week, saying, “Now my only dream is to kick Nattie’s legendary ass.” She rips a legitimate picture of 14-year-old Jade and Natalya up, leaving the good memories behind.

Roxanne Perez has possibly the lamest introductory vignette ever, posing as an outcast video-game player who used titles such as WWE ‘12 and WWE2k17 as a childhood escape. “I knew one day the virtual world would become the real world. Next week, I step out of the video game and into real life.” Her interview is thankfully interrupted by Toxic Attraction, and Jacy Jayne issues a challenge for later tonight.

Joaquin Wilde and Cruz Del Toro drop their opponents quicker than WWE has dropped the Grizzled Young Veterans name. Their first names are apparently redacted too, but no, famous Canadian rapper Drake is not wrestling. After another impressive display of good lucha things, Wilde and Del Toro decisively pin Drake for the victory. LDF’s Santos Escobar takes the microphone, declaring, “As I take care of Carmelo Hayes, Tony D’Angelo, watch very, very closely, as a true leader is gonna handle his business.”

Wes Lee finally gives a genuine and collected interview, and the inexplicit topic of course is the released Nash Carter. But it’s too good to be true, because Xyon Quinn steps in. “Maybe seeing you out there will bring some peace to this chaos,” says Lee.

The numbers advantage for Escobar has been removed since Fallon Henley, Josh Briggs, and Brooks Jensen fought Legado del Fantasma away during commercial. Meanwhile, Williams is present ringside allowing Hayes to capitalize before picture-in-picture. Hayes uncharacteristically applies a long-winded rest hold until Escobar reverses with a delayed suplex, knocking both competitors down. Escobar makes the comeback with an outside dive, but two of Tony D’Angelo’s henchmen take him out. Hayes hits the picture-perfect top rope leg drop for victory, and afterwards, he and Williams grab two microphones. North American Champion Cameron Grimes interrupts the post-match message, but Solo Sikoa attacks the duo from behind. “I got next,” he says.

Bron Breakker’s search for Joe Gacy leads him to a room of mirrors. Gacy does the ol’ trick of appearing in the reflection but disappearing as Breakker turns around. “Where are you?” the NXT Champion screams out.

“I’m the leader, and I refuse to sit by and watch another group crumble… I’m gonna start making examples of people. If they don’t agree with my vision of this group, they’re an enemy of Diamond Mine,” Roderick Strong tells Malcolm Bivens.

Paxley gets the better of Natalya after some chain wrestling, but the latter’s discus clothesline takes her out ringside. Paxley recuperates and continues the offense until being sent into the turnbuckles, and Natalya applies the Sharpshooter for the tap-out victory. Later on, the victor is interviewed backstage but is approached by Nikkita Lyons who issues a challenge for next week.

Tony D’Angelo denies any involvement in the Santos Escobar and Carmelo Hayes match. The stereotypical mafia outfits certainly didn’t give it away. Later, Legado del Fantasma finds their car tires locked up with a dead fish on the windshield. “I think it’s pretty obvious who did this,” announces Santos Escobar.

The newly single Lee starts hot, but Quinn halts the momentum by slamming him onto the apron. Quinn works much better as the villain, especially with an underdog like Lee who valiantly fights back. Lee attempts a springboard but slips, and with a brutal running forearm, Quinn gains the pinfall victory.

Von Wagner “has been suspended and fined an undisclosed amount by NXT management.” This comes after throwing Ikemen Jiro into the crowd and sending Kushida into the alumni section.

Perez’ in-ring introduction is slightly more impressive than her vignette. Wendy Choo appears on screen revealing a destroyed Toxic Lounge, which allows Perez to capitalize with a roll-up victory. Much like the Toxic Lounge, the women’s division is a mess.

It’s Lumis and Hudson’s first matchup as a tag team, yet they’re cutting the line via flirtation. The champions put their arms around Indi Hartwell and Persia Pirrotta ringside, which initiates the comeback from the challengers. After picture-in-picture, Elton Prince and Kit Wilson beat down on Lumis until Hudson receives the hot tag, and somehow, this mismatched duo actually works pretty well. But ultimately, it’s a simple big boot from Prince that puts Hudson away in rather flat fashion.

The lights go out, and a spotlight reveals Joe Gacy atop the ringside platform. Bron Breakker follows him up for his father’s WWE Hall of Fame ring, and Gacy proposes an NXT Championship match at NXT Spring Breakin’. He finally gives back the ring before telling Breakker to “take a leap of faith,” pushing him off the platform to the floor. A group of hooded men surround the champion to close the show bizarrely – in a derogatory type of way.

NXT characters range from bland to completely ridiculous, and tonight’s episode presented the extremes of both. The direction they’ve sent Joe Gacy in is corny, but that fits the vibe of NXT 2.0. Otherwise, the action tonight was pretty fast-paced, and there were some genuinely interesting interactions between a lot of competitors.