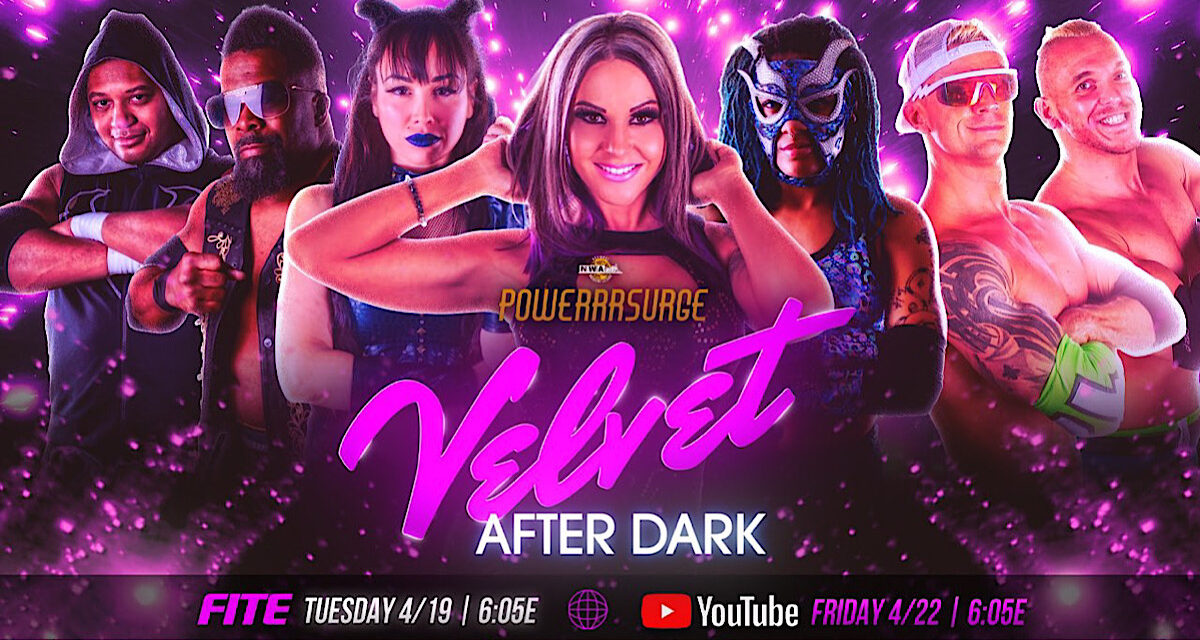 We first gets a disclaimer for the sensitive viewers (read: prudes), and we get a dark skyline set to what I can describe as elevator/LoFi/soft jazz music like it came straight outta Cinemax’s adult programming late at night. (Hey, don’t judge me! I’m not on trial here!). 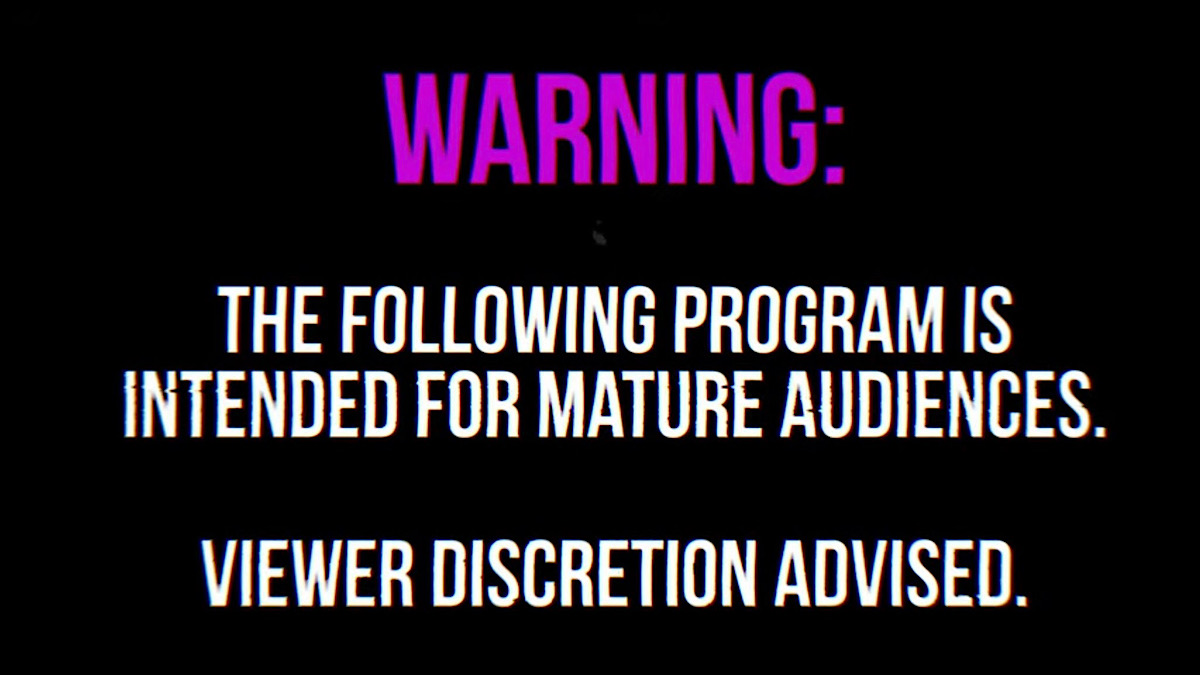 We then get the NWA backdrop bathed in a violet glow, where the sultry voice of Velvet Sky introducing the show, and she wants to introduce us to what gets here hot and steamy, so here’s the First Match… 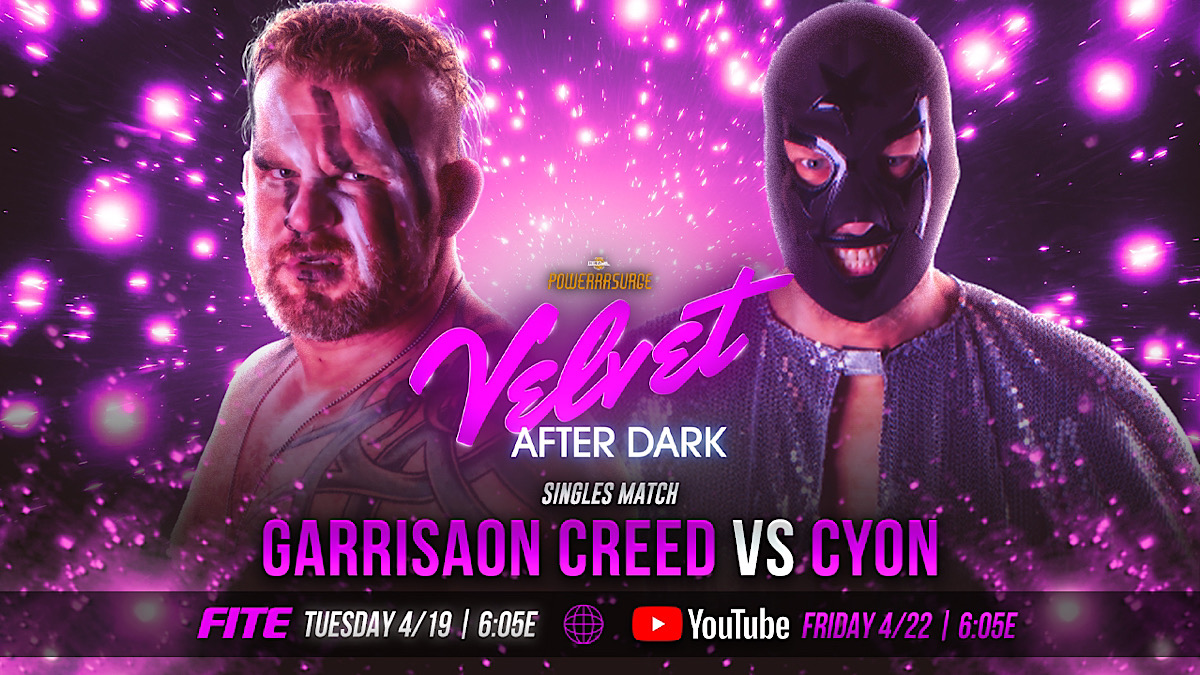 Cyon is in a mood ever since the Tyrus Slam Challenge , and he takes his frustration out on newcomer Creed. He eyes Austin Idol at commentary, and that prints Joe Galli to ask that business of Idol knowing his father, and Idol is oddly tight lipped (even though last week he made the revelation. Whoever edited this show may need a refresher on how linear time and continuity works). In any case, Creed gets a nice suplex with a roll through, and then goes for a knee shot. Cyon dodges and gets Creed with the DVD finisher for take care of The upstart Creed

Your Winner via Pinfall: Cyon

We go back to Velvet Sky,and she’s with her Dirty Sexy Boys (naturally). Since she’s been seeing them in tag team action, she offers to accompany Dirty Dango and JTG at ringside for a little three way action. 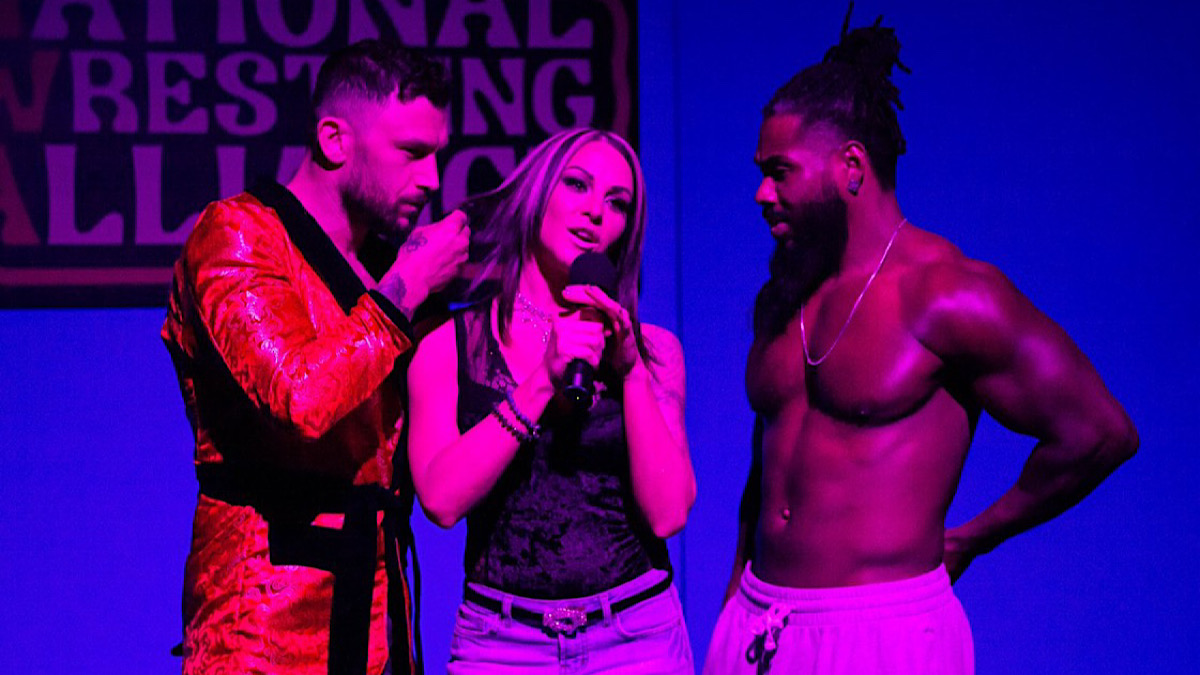 For some reason, JTG channels his inner Beavis and says, “Hehe. Three way, hehe.” Dango said he is is wrapped in velvet, and he always enjoys getting wrapped in velvet (if you catch his drift).

Before the language can get more steamy, Sky offers us some hot women’s action (not like that, you pervs!!), so here’s… 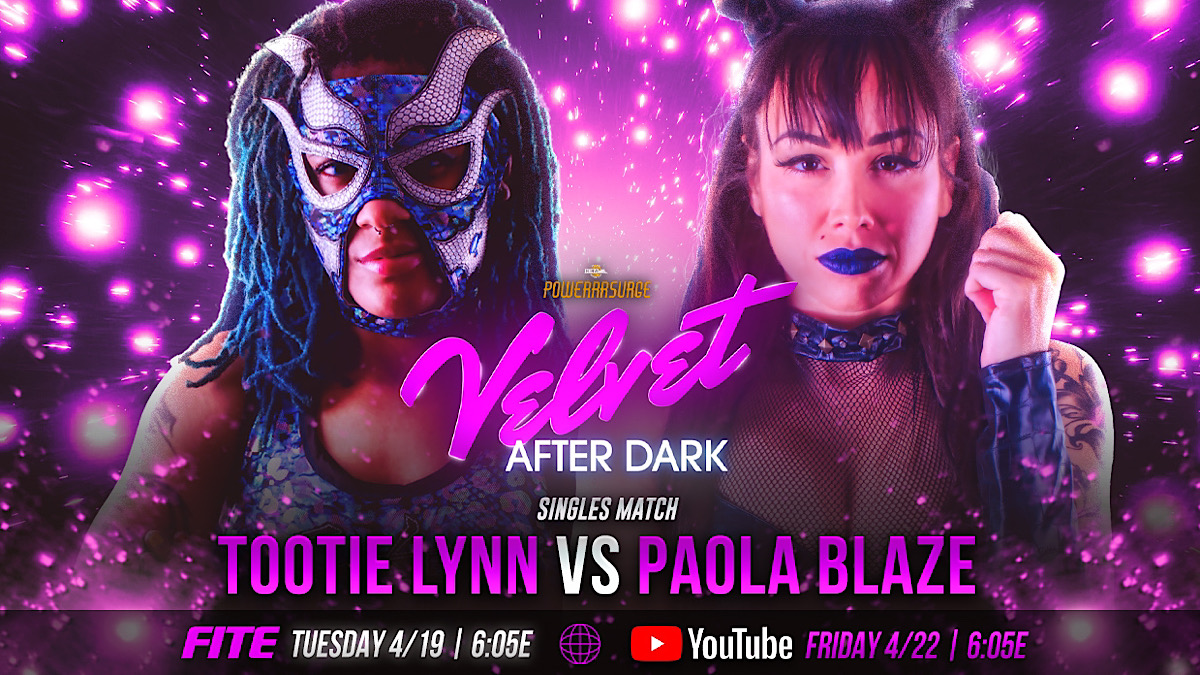 Since leaving Taryn Terrell’s service, we get a darker look for Blaze. It makes no difference as the Little Blue Dragon just goes to work with a stomp and a Fujiwara Armbar to Blaze’s arm. Blaze tries to turn the tide, and gets Lynn in the corner and nails the Meteora to cover for a one count. Blaze goes to the well once too often, because Lynn has it counted and she goes for rolling elbow to a step up enzugiri. Lyn. Covers Blazes for a two count. She goes up top to land a crossbody to cover, but Lynn gets another two count? Lynn nails a high roundhouse kick that rocks Blaze to the mat. As she stumbles to her feet, Lynn rushes at her and Blaze gets theref in between to slow her down. Lynn gets the ref aside, but in the confusion Blaze trips up the Little Blue Dragon and gets her feet on the ropes for leverage, as the ref counts and she underhandedly gets the pin.

Your Winner via Pinfall: Paola Blaze

Back to Velvet Sky, with the Dirty Sexy Boys. The language is starting to ramp up a bit, as Velvet tells the Boys that because she used to wrestle she enjoys a bit of pain, and all I can think of is the line from Aqua Teen Hunger Force a as I think their sexual innuendo is priceless (read: super hysterical). Dango is beyond hot to trot, as he asks how much time is this next match? Velvet Sky throws it back to ringside for some more action, but this time we get… 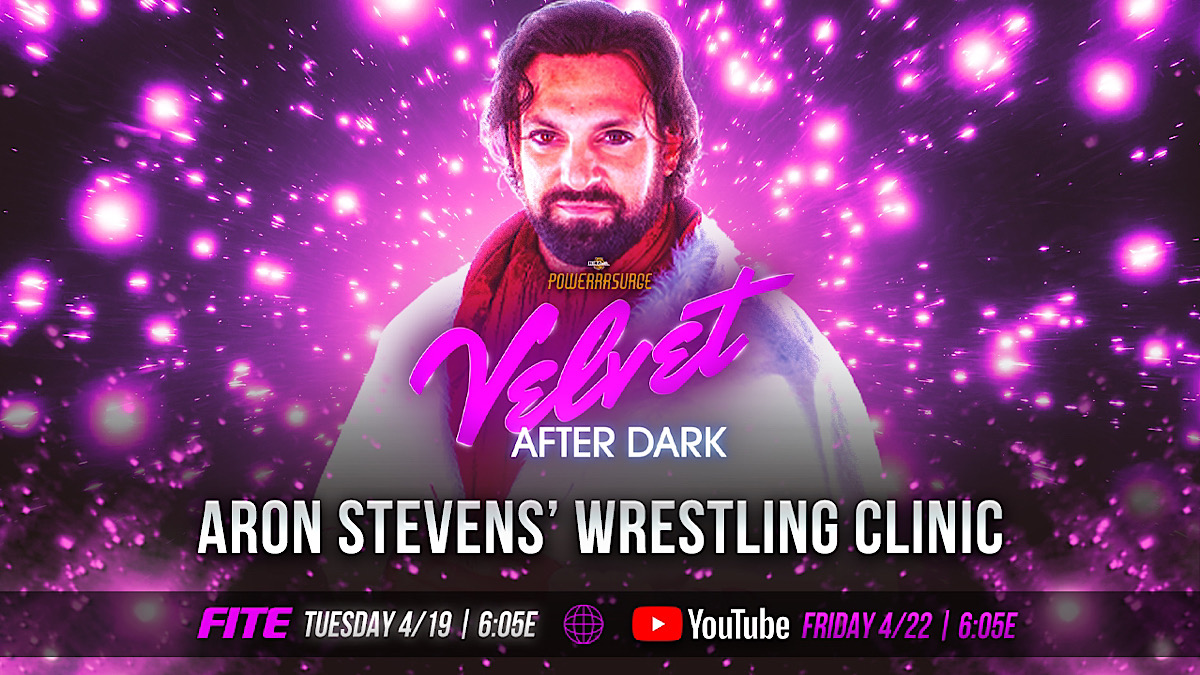 Aron Stevens in the ring with Kyle Davis. Stevens offers us all his wrestling clinic. He gets the to demonstrate with his willing(?) participant, KC Rocker. He first starts with an armbar, like the band Queen, he puts the Rocker Under Pressure. Next up is a cravat that Stevens says he learned from Doug Williams, and he really puts some English on it. Finally, it time for basics, as Stevens reminds us he has a third degree belt in Mongrovian Karate.

Stevens demonstrates the Mongrovian Side Choke, and it’s a dangerous hold he advises Davis. He gets Rocker cinched in the hold, and then tells him to “ say hello to the little birdie,” as he spikes him in the throat with his thumb. Stevens has clearly snapped at this point.

On the plus side, if ever someone at Marvel wants to recast for Moon Knight, have I got a candidate for them.

Now for some more Velvet After Dark, where she can unleash from the stressful work at commentary. Here, she gets all hot and bothered… and Austin Idol appears, asking her if her parents know she’s doing this.

Whelp… that killed the sex appeal, and definitely enhanced the “ick” factor. 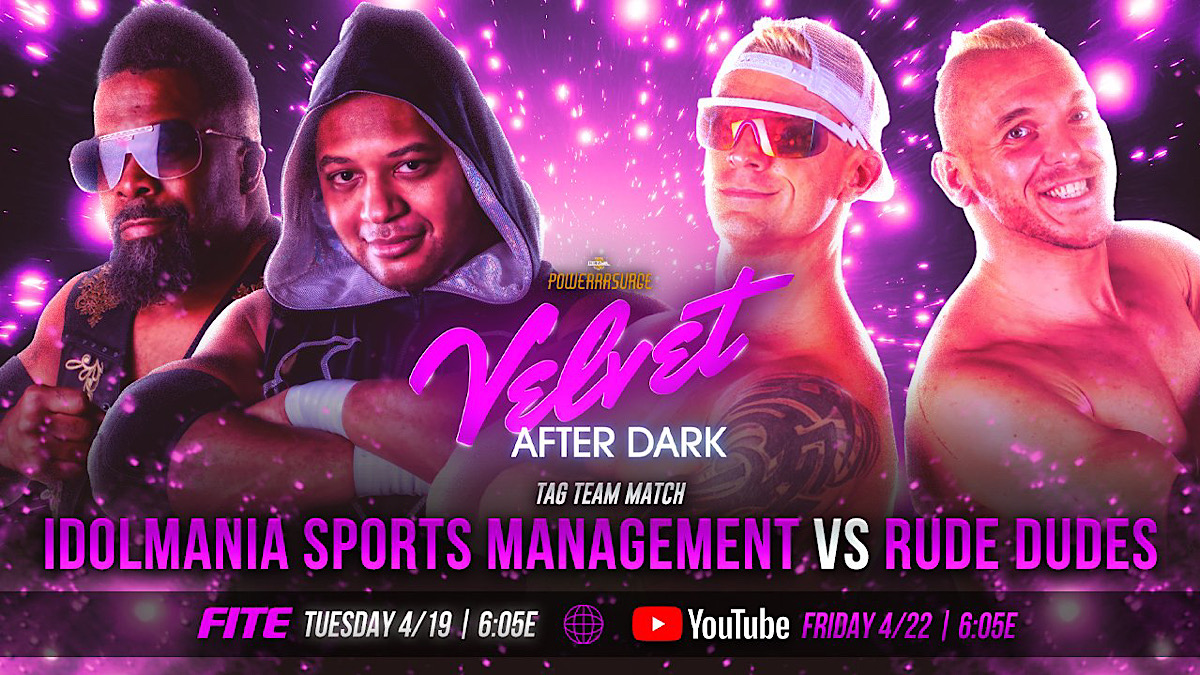 El Rudo starts against Rockett who’s able to overpower the Rude Dude All Day, if you will. Stanley tags in, but IdolMania is running wild, as he becomes a Jawline In Peril. He tags back to Rudo, and he takes his time with Jeez, but The Church’s Money manages a sunset flip, but Rudo was able to reach for a tag as Stanley delivers a kick to the back of Jeez’s head to break the count. Stanley gets him in an abdominal stretch with a pose, but Jeez hip tosses him.

The Rude Dudes keep Jeez isolated but a hot tag to Rockett allows the IdolMania powerhouse to go on fire All Day. But the Dudes has some trick up their sleeve as El Rudo gets a STO to a cover for a two count. Rudo tags to Stanley with a Samoan Drop, and he then runs ropes for the Jawline pose with one foot to cover for a one count. Stanley tries two elbow drops, but misses the mark. He runs the ropes and a powerslam by Rockett gets a two count. The Match breaks down in a hurry, and Jeez sends Rudo outside with a suicide somersault senton. In the ring are the legal men, and Rockett delivers the Rockett Kick finisher to Stanley for the one, two, and three.

As Velvet After Dark draws to a close, Sky and Idol have a Bicker fest that bickers on total bickering (did I mention I’m drinking heavily?).

Sky says that Idol is ruining her fantasy, and she gives the mic to him and alms off. Now Idol says something, but I’m already drunk, annoyed, and have zero interest in anybody mansplain to any woman how to behave. I muted the TV at that point, and that was the cold shower needed to end this segment After Dark.

Despite the warnings to the contrary, this was soft core…wrestling at best.  Solid matches, interspersed with comedy innuendo.  I get why the interaction with Idol/Sky at the end, but it fell flat, and I was not interested in another old, white dude explain proper behavior to a woman.  I deal with that enough at my home.

But enough about the Utah Legisature, so we’ll see you in seven.