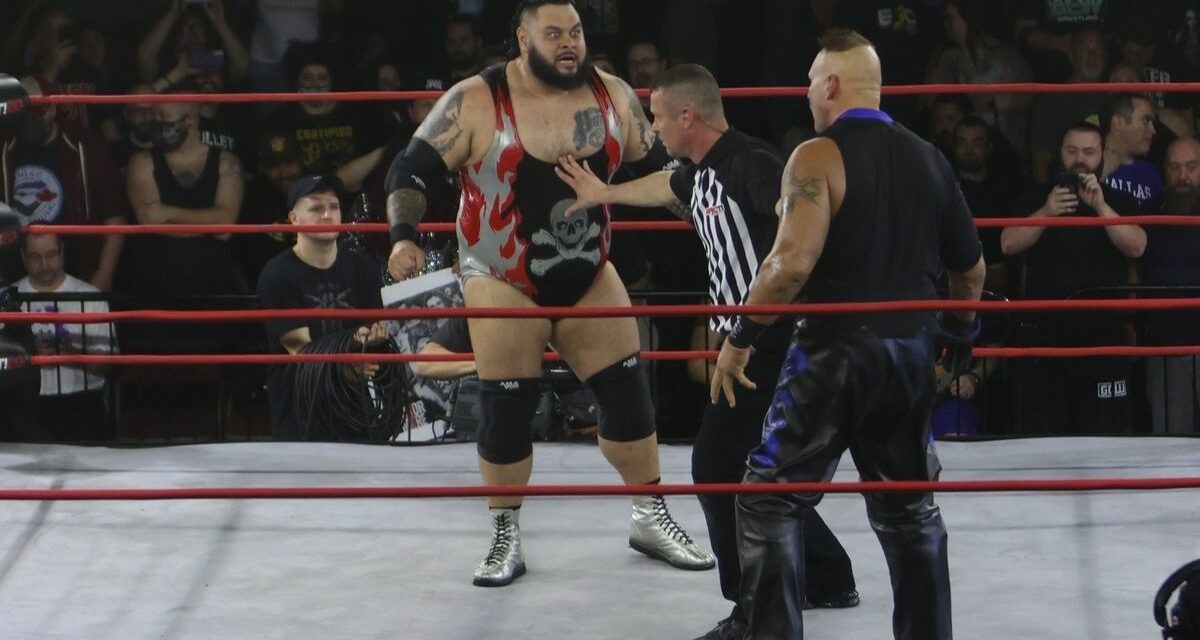 Greetings and salutations everyone and welcome to this weeks Impact TV report. This week Impact went into the 2300 arena in what is without a doubt going to be a fun show as Josh Alexander and Moose continue their blood feud for the Impact World Championship. Without further ado, lets get to it.

The show started with a recap of the ongoing, everlasting Moose and Josh Alexander. They show a clip of Alexander injuring Madman Fulton’s ankle.

After the intro we see W.Morrissey in the ring. He talked about his last time at the 2300 arena. He talks about how he is now clean and sober which got a huge reaction from the crowd. Morrissey looked like he was going to start crying. He then thanked the crowd for the support.

While this touching moment was happening, Brian Meyers comes out. Myers said that he does not feel bad or sorry for him. Myers said that Morrissey was handed a golden career and he threw it all away for “a good time”.

Morrissey went to attack Myers but before he could put him through a table, Chelsea Green and Matt Cordona come in and attack Morrissey and was the one who was put through the table. 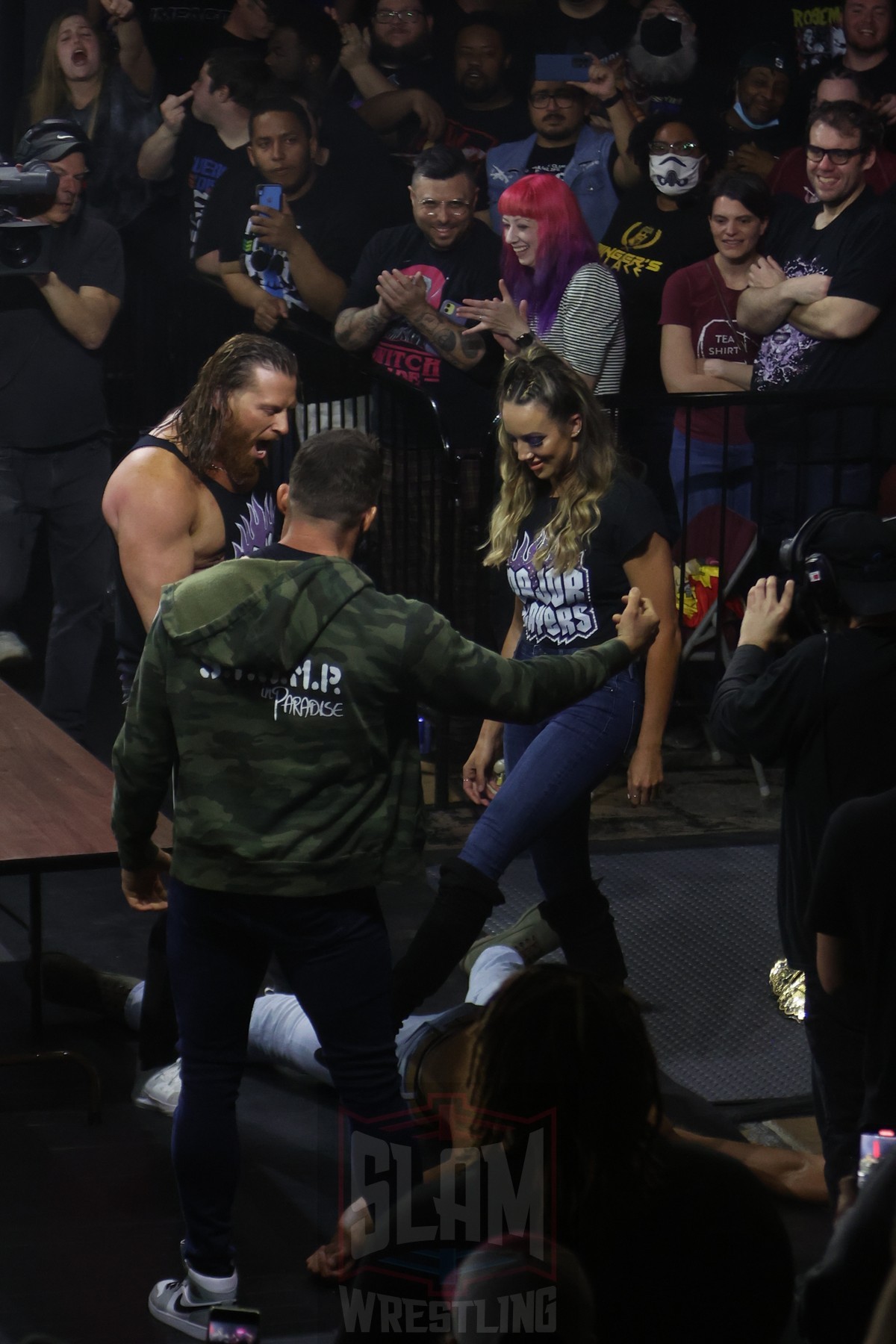 Brian Myers, Matt Cardona and Chelsea Green kick W. Morrissey while he’s down on Impact Wrestling, airing on April 14, 2022, taped in Philadelphia at the 2300 Arena. Photo by George Tahinos, https://georgetahinos.smugmug.com

This match started with Purrazzo in complete control of Nightingale. after a ton of offense from Purrazzzo, Nightingale came back with a superkick of her own to get some offense in. This didn’t last too long as Purrazzo started working the arm of Nightingale. Purrazzo went for an early Fujiwara armbar but Nightingale hit the Babebreaker for a near fall. 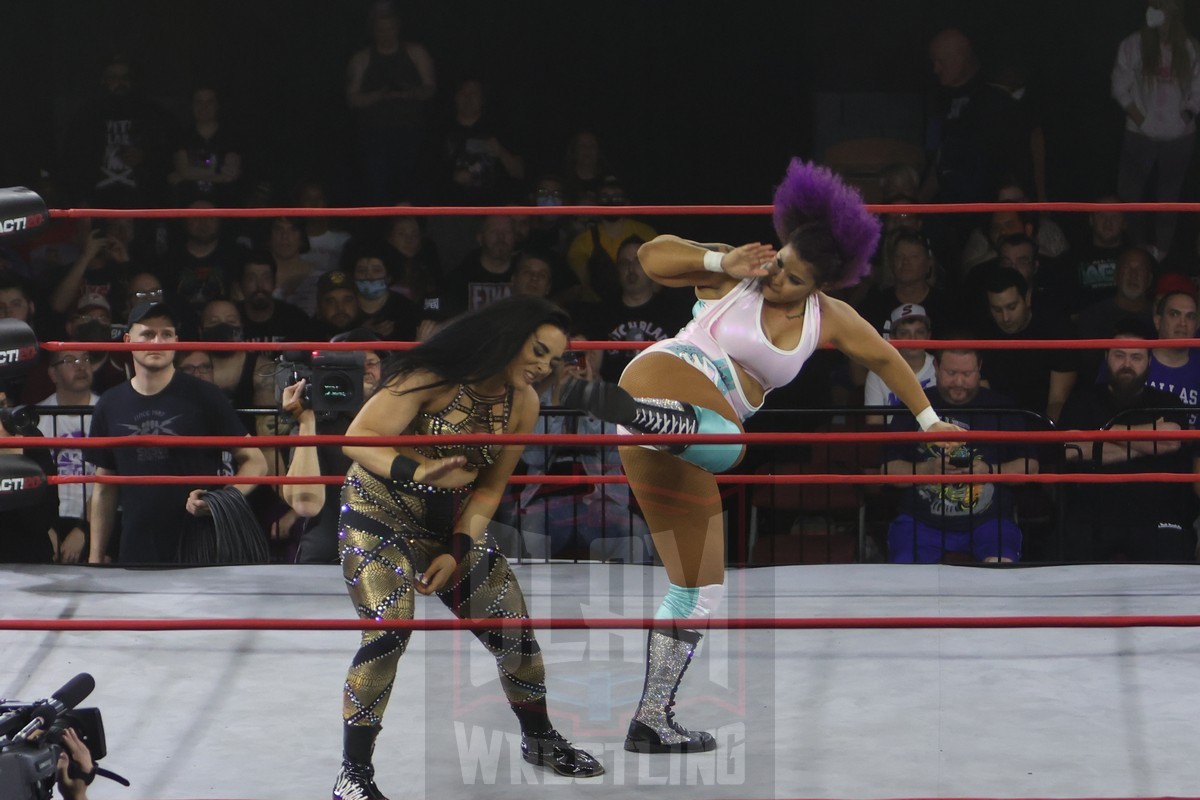 After some more back and forth, Purrazzo blocked a moonsault from Nightingale and was able to get the Venus de Milo. Nightingale tried her best to break out BUT this was too much even for her so she was forced to submit to give Purrazzo the win.

We get a recap of Mickie James and Nick Aldis beating Chelsea Green and Matt Cordona at Multiverse of Matches.

Gia Miller is with Mickie James. James said that she is not yet done with Green. James mentioned that she wants to teach Green a lesson. This prompted Green to interrupt James and they start brawling until Cordona and Myers attacked James and held her to allow Green to get some more offense in.

Gia Miller is now interviewing Tasha Steelz about her upcoming match at Rebellion against Rosemary. Steelz assured everyone that she is not afraid of Rosemary. Decay shows up on the TV and Rosemary simply says that Steelz will get a taste of her decay.

This match is a match between two friends. The match started of as a 50/50 affair with both men getting some nice technical offence in. Gresham hit Romero with an absolute beautiful dropkick. This opened the floodgates for Romero to take control of the match. Gresham made a point of targeting Romero’s arm through his flurry of attacks. Romero was able to get a bit of his own attacks in as he was able to hit the Forever Clotheslines. Gresham quickly recovered and both men were chopping each other back and forth until they both fell from all chops. 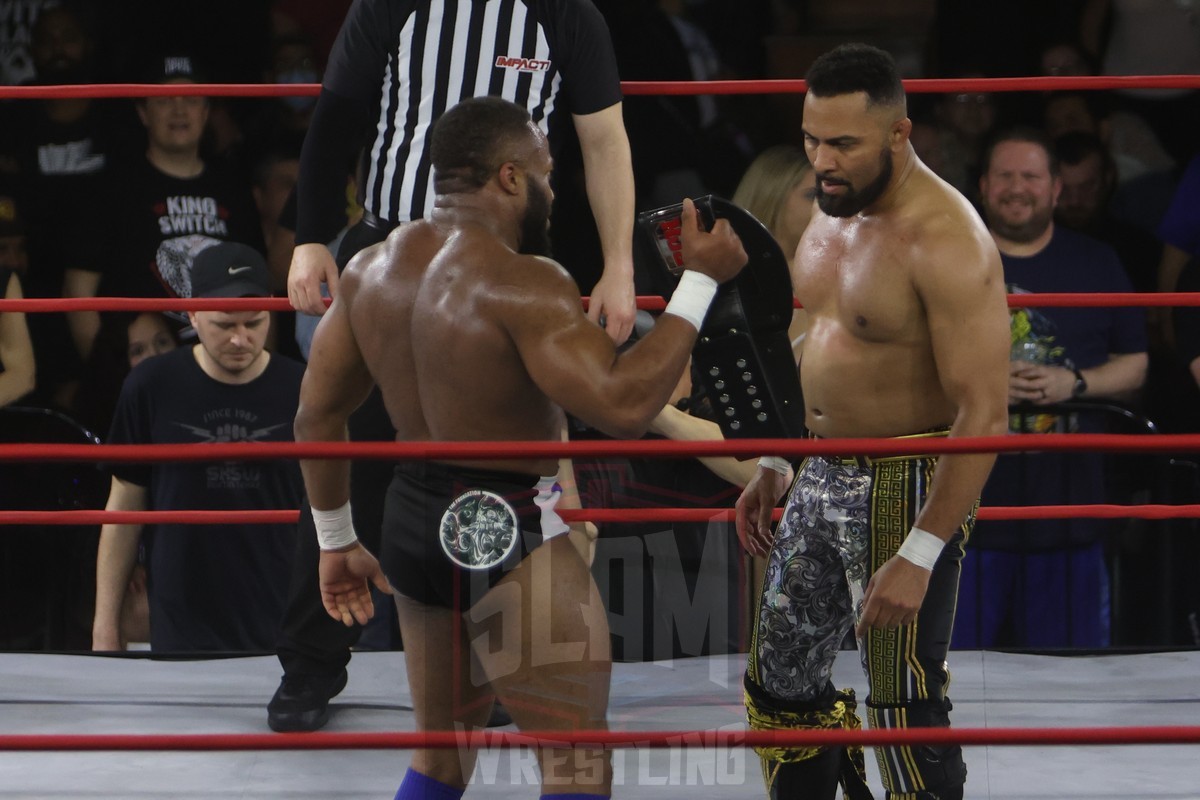 Gresham blocked a Sliced Bread from Romero but after a hurricarana, Romero was able to hit the a Sliced Bread for a VERY CLOSE 2-count. Romero followed this up with a running Knee to Gresham for yet another close pin attempt.

Eddie Edwards is watching this match with a lot of interest in the back as he is studying his opponent at Rebellion, Jonathan Gresham.

Gresham was able to get a Lionsault and a tope suicida on Romero who was recouping on the outside. Both men ended up back in the ring and then in the most Gresham way, he created a new type of pin that gave him the 3-count and win over Romero.

After the match, Romero asks Gresham for a ROH World Title match and Gresham agreed.

A video package of Josh Alexander aired. We get Alexander’s thoughts about his crazy night at Bound For Glory. He then rips Moose apart verbally for making this personal as he has involved his own family in their feud. Alexander said that he has had to go through a very tough road but it will all be worth it as he gets to get his hands on Moose and the Impact title all at once.

Mike Bailey and Ace Austin are fuming about the fact that Mad Man Fulton is out. They tip toe around forming an allegiance to take out Trey Miguel.

Steve Maclin is continuing his attack on Team Impact and this week it is Alex Shelley that is in his crosshairs. The match started at a solid 10 as both men were very intense with some back and forth chops and punches. Shelley was able to take control of the match and took Maclin down but Maclin used his brute strength to get Shelley off him. Maclin hit Shelley with a lethal back elbow that had him stunned for a bit. 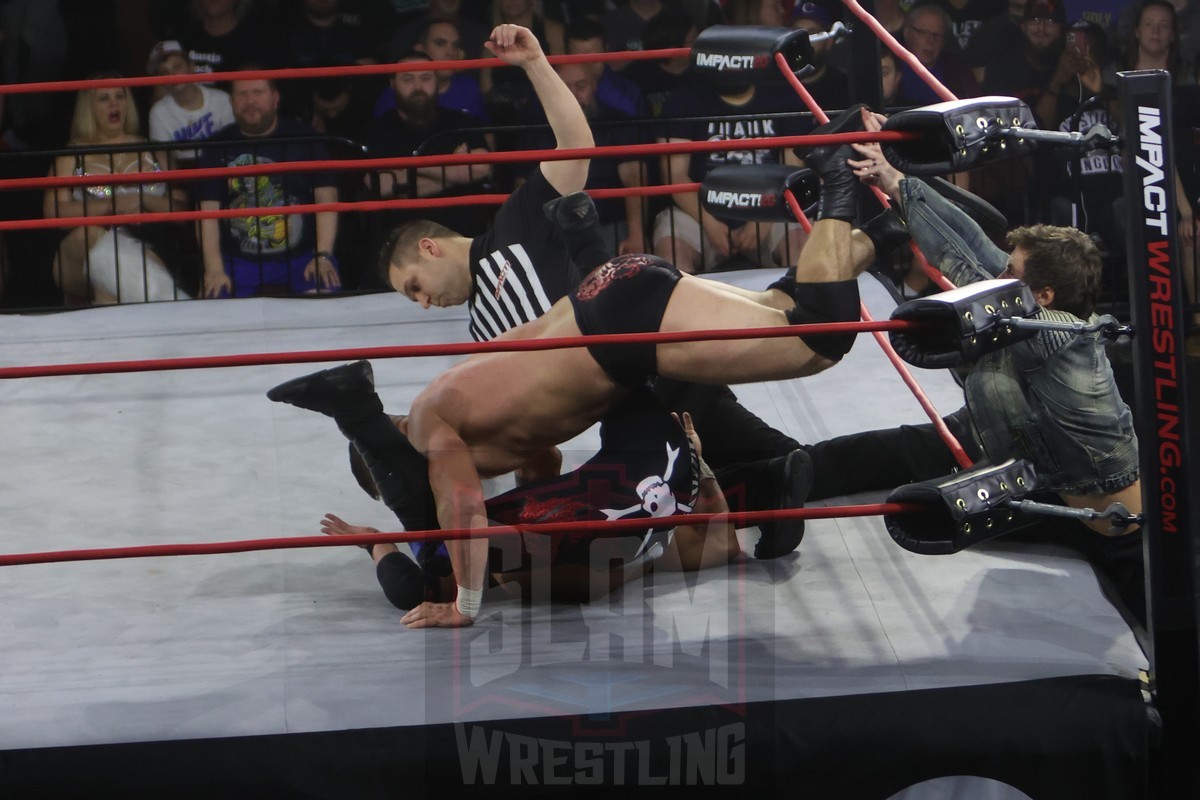 Steve Maclin gets a little help when pinning Alex Shelley on Impact Wrestling, airing on April 14, 2022, taped in Philadelphia at the 2300 Arena. Photo by George Tahinos, https://georgetahinos.smugmug.com

Shelley and Maclin ended up back in the ring and there was more back and forth action between the two. Maclin hits a Crosshair Spear after Shelley went for a Sliced Bread.

Shelley got some lethal elbows to Maclin which sent him crashing down on the floor of the ring. Shelley made impact with another kick but couldn’t quite land his Shellshock.

This opened up the door for Maclin to hit a running knee followed bya  backplex on the ring apron. Maclin started talking to Sabin which gave Shelley the opening to hit Maclin with a Sliced Bread on the floor outside of the ring. Shelley went for a footstomp but Maclin reversed it to a pin with his feet on the ropes BUT Sabin makes the save which opened the door for Shelley to hit a Shellshock for the Win over Steve Maclin.

On Before the Impact, Madison Rayne faced Jessi McKay. The major take away was that all four women of The Inspiration and The Influence turned on Kaleb.

Gisele Shaw confronts Madison Rayne and tried to make fun of her for losing Kaleb. Rayne said that Kaleb was fired and they don’t need him to win.

We get a very good video package of Moose’s road to winning the Impact Championship from winning the Call Your Shot Match to challenging Josh Alexander later that night at Bound For Glory.

Honor No More came out to the ring. Edwards talked about the history of the 2300 Arena and Philadelphia, the city that gave birth to Ring of Honor. He capped things off by saying the fans in Philadelphia are the worst as they are the most fickle of them all.

Mike Bennett took the microphone after the crowd got rowdy. Bennett said that he made his ROH debut in the very same building. He said that the fans in the 2300 arena turned their backs on ECW and ROH. Taven mentioned that he had to carry ROH on his back for so many months. 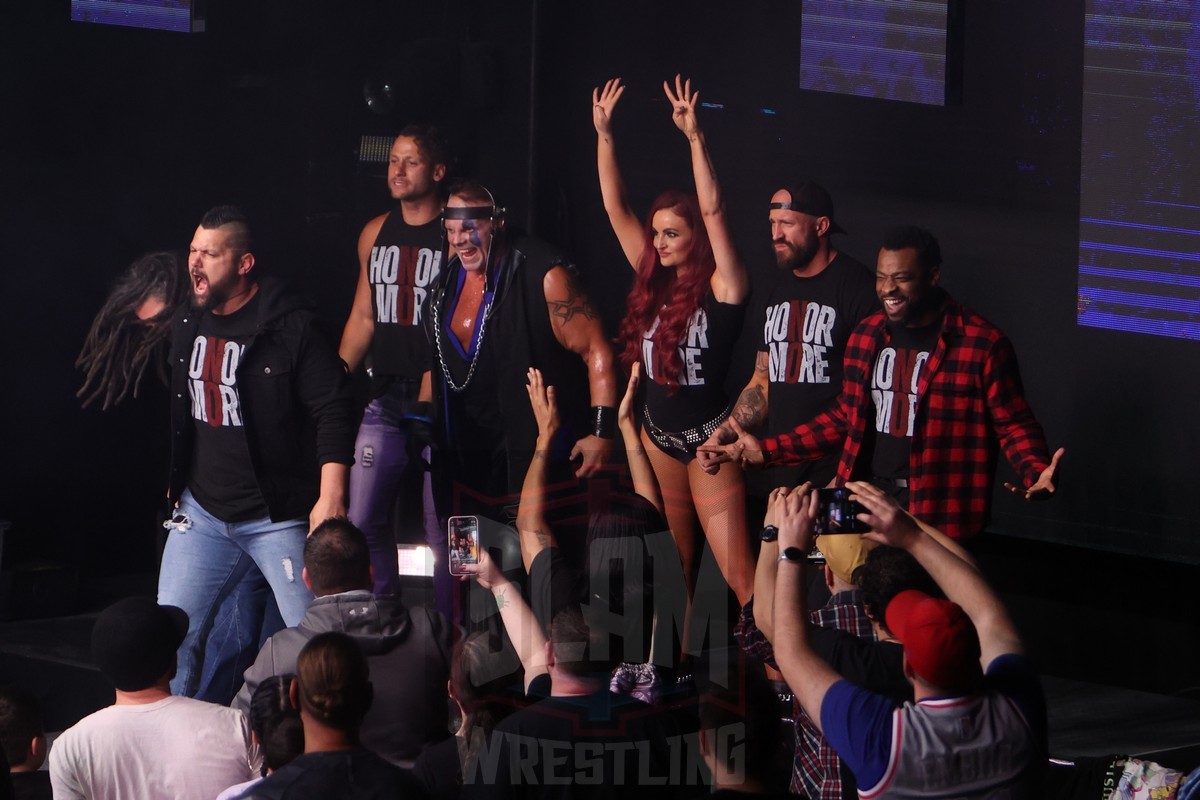 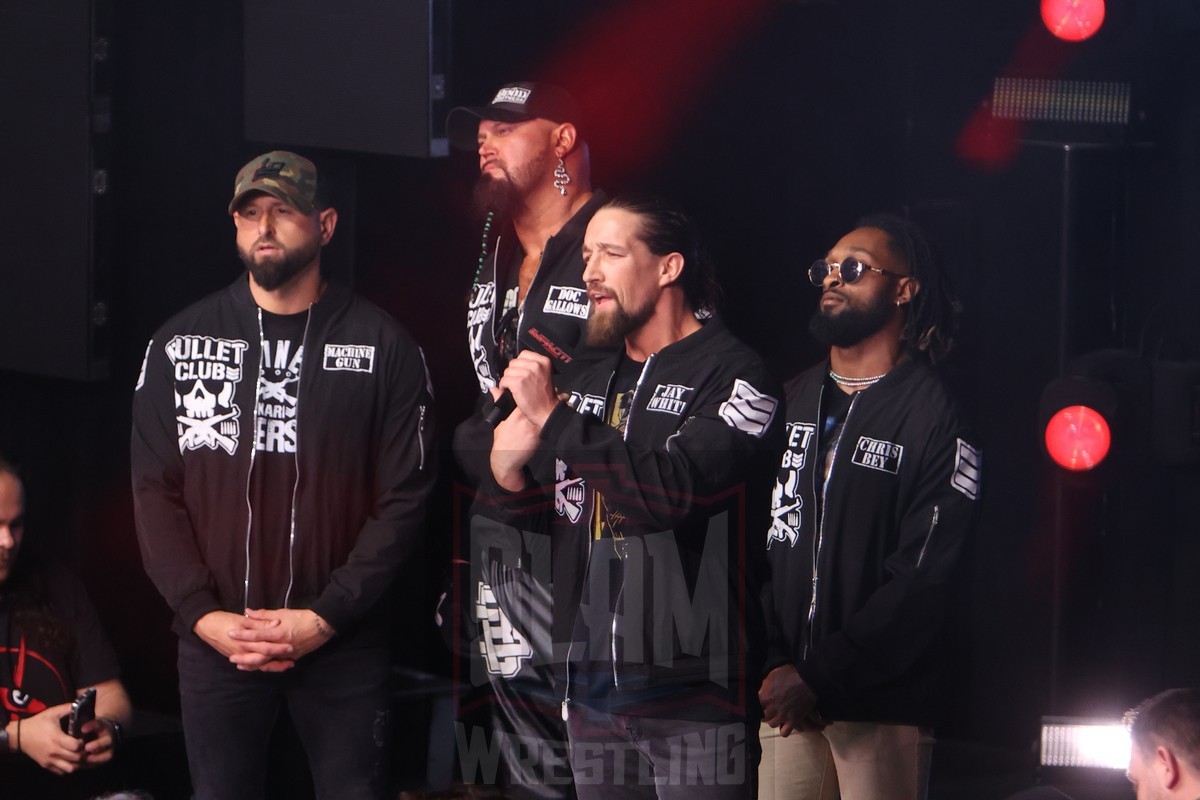 Anderson made fun of Honor No More by saying they are the toys no one wants to play with anymore. Maria got on the mic and said that Honor No More is in Impact for good.

Chris Bey took the mic and challenged Honor No More to a fight. Both groups got into a brawl that ended when PCO hit the De-Animator to everyone. This prompted JONAH to make his entrance for the main event. 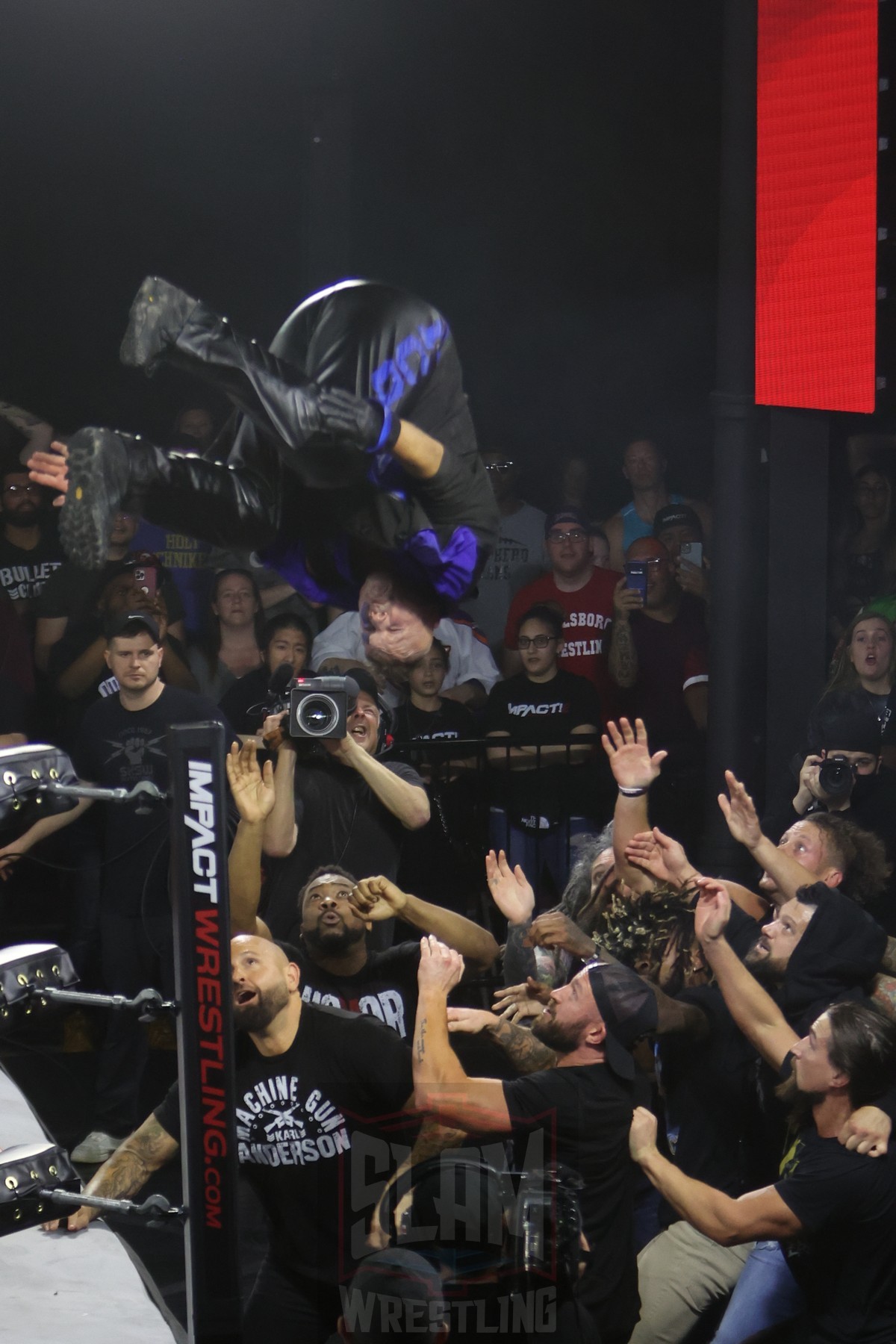 PCO cannonballs out onto Bullet Club and Honor No More on Impact Wrestling, airing on April 14, 2022, taped in Philadelphia at the 2300 Arena. Photo by George Tahinos, https://georgetahinos.smugmug.com

When we came back from commercial it was just PCO and JONAH in the ring. Jonah hits the corner steel post after PCO moved away from an attack. PCO hit a neck breacker on JONAH. This was not enough to keep JONAH down for too long as he got up and jumps from the apron for a splash on PCO. JONAH connects with a buckle bomb on PCO but this didn’t phase him as PCO crashes out of the corner of the ring with a massive clothesline. JONAH hits a Tombstone piledriver but PCO kicks out at just ONE. 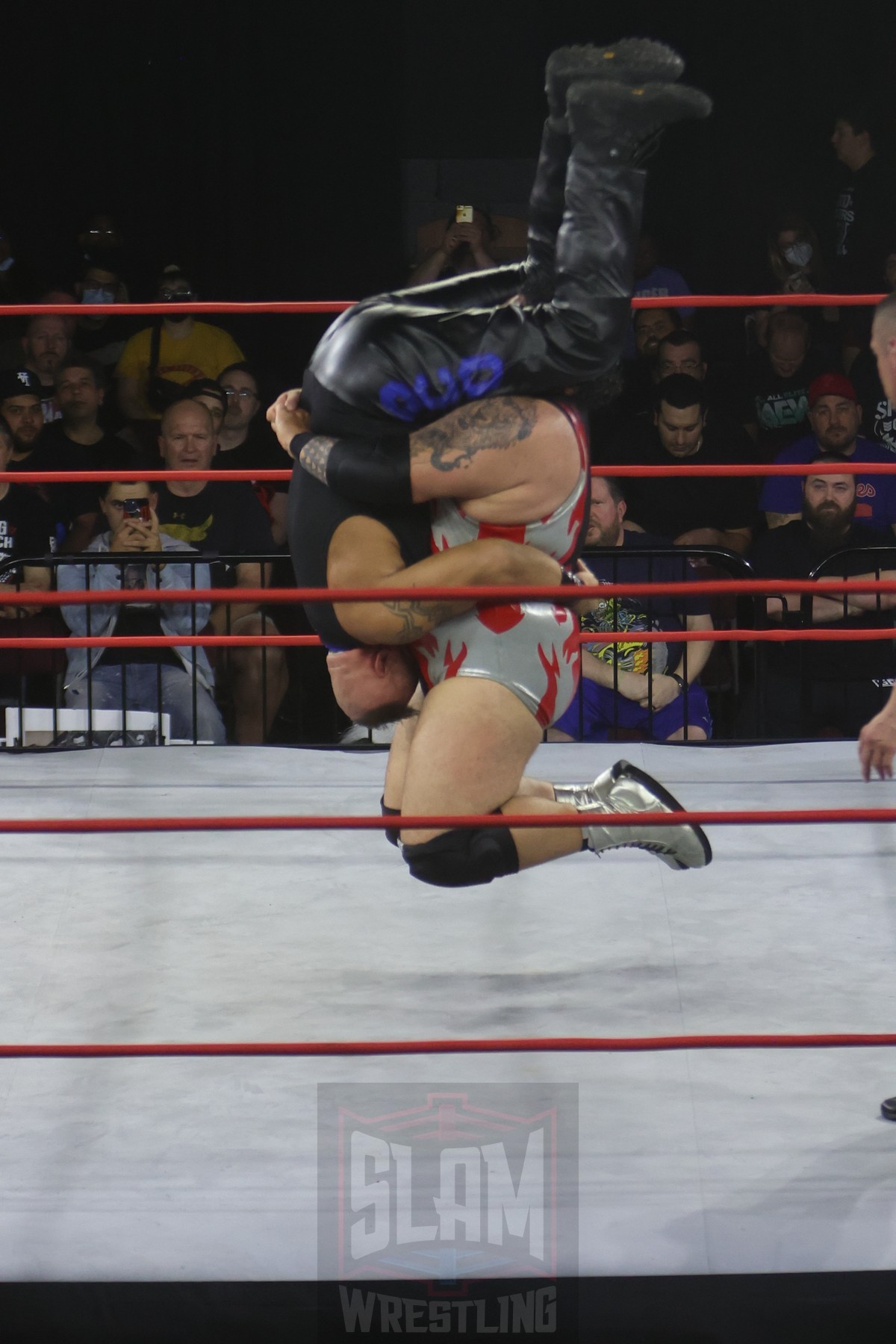 Jonah piledrives PCO on Impact Wrestling, airing on April 14, 2022, taped in Philadelphia at the 2300 Arena. Photo by George Tahinos, https://georgetahinos.smugmug.com

PCO went for the apron De-Animator, but again JONAH moved, then followed by dropping PCO back into the rail, against the ring post. JONAH then hits a Tsunami on PCO for the 3-count and the win over PCO.

After the match, PCO kept getting up after more attacks from JONAH. JONAH then got fed up and attacked PCO with a chair. PCO was still not out so JONAH hits PCO with a second Tsunami but this time with the chair on top of PCO for the extra oomph. PCO now stopped moving as JONAH stood tall over PCO as the show closed.

TOP PHOTO: Johan and PCO are separated by the referee before their bout. Photo by George Tahinos, https://georgetahinos.smugmug.com

This episode of Impact TV was fantastic. The Moose and Josh Alexander match is really feeling like a blood feud. This match is really shaping up to be one of the biggest and most anticipated matches that Impact has put on in years.

Honor No More has found a new group to fight against. The Bullet Club is stronger than ever and this back and forth is surely going to result in a massive fight with some very interesting one-on-one combinations.

Deonna Purrazo continues to excel as ROH and Reina de Reinas Champion. This is a very complimentary program alongside Steelz and Rosemary.

Rebellion is shaping up to be a fantastic show and this week’s TV had a great balance of matches, storytelling, and promos. A real must watch episode.