Live crowd smaller but no less enthusiastic at post-Mania RAW 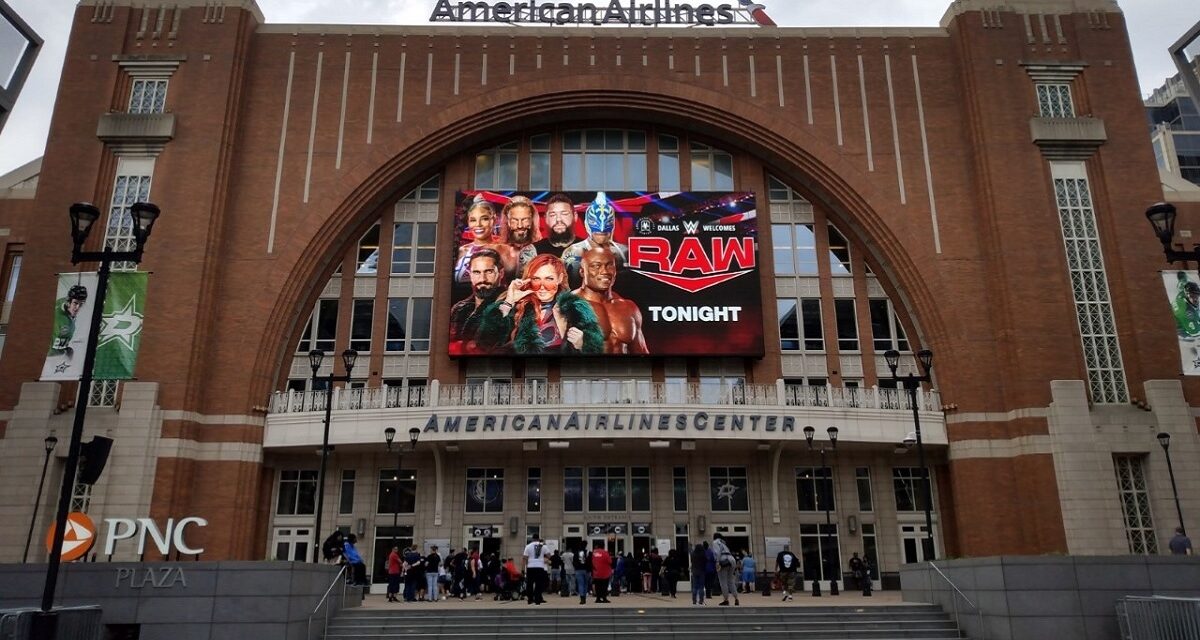 DALLAS, TX – After two nights of WrestleMania being in a huge stadium, last night’s move to the smaller American Airlines Center – an NHL hockey arena – felt a lot more intimate. But the smaller building size didn’t dampen the enthusiasm of the crowd in the building.

About ten minutes before the show, the seats in the building started to fill up as people trickled in from the concourse. As showtime approached, the chants began, with many people opting for the traditional Ric Flair”Whoooo!” but there was also a healthy number of Chad Gable “Shoooooosh”es, so clearly the WWE Universe has connected with that one.

By the time the Main Event tapings were finished (two matches – see below for spoilers), the place was pretty much full, with only some pockets of seats empty (though, it is noted there were some sections that had been entirely tarped off, so “full” is somewhat relative).

The crowd murmured in anticipation when, during the second of the Main Event matches, a number of stagehands built the ramp-bridge structure on the entrance stage, which we later found out was for Cody’s entrance.

The RAW commentary team got some applause when they walked out. And two minutes later, it was time for the show.

Our very own Dave Hillhouse did a full recap of the actual broadcast that fans watched at home.

I’m not sure how it appeared on TV, but live, the crowd was enthusiastic and raucous for most of the night. From the huge ovation that they gave to Cody Rhodes to kick off the show. To singing along with entrance music, to coming up with various chants to suit the particular occasion. 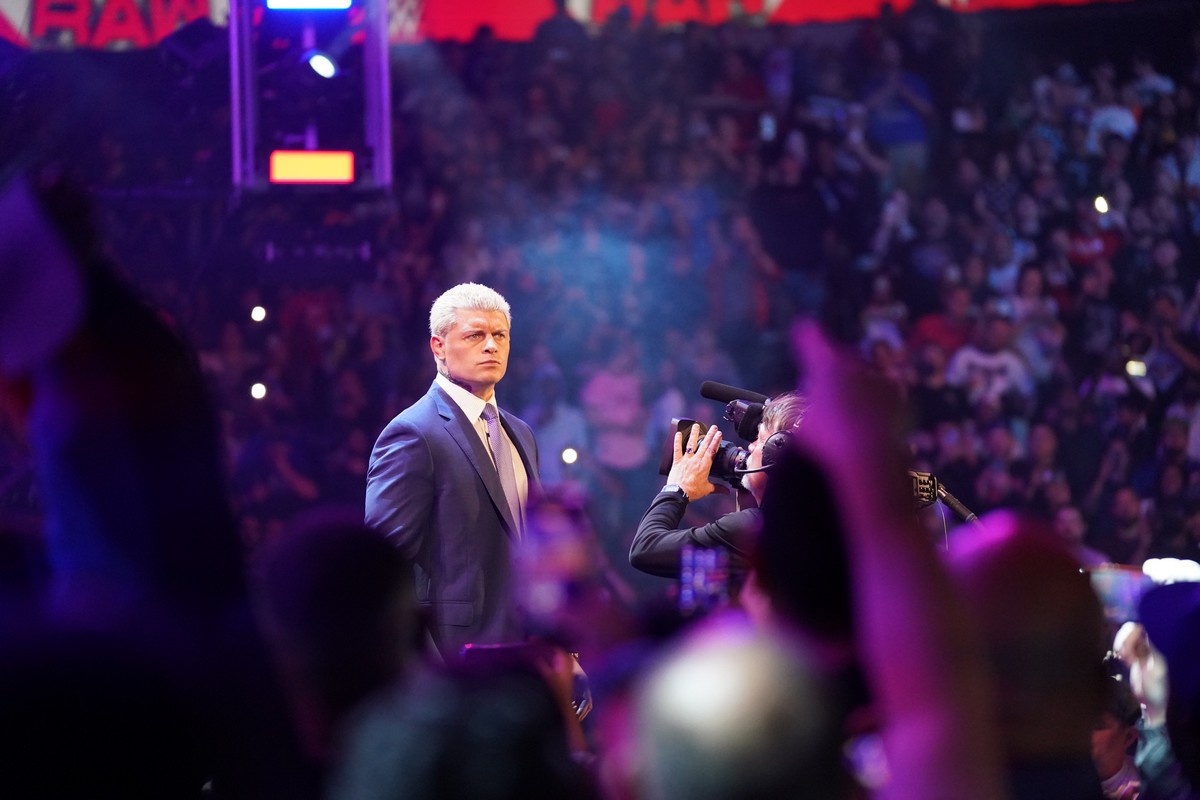 Watching RAW on TV can be frustrating because of the stop-and-start aspect of the pacing: i.e., a Superstar will do a full entrance, and the show will go to a lengthy commercial break, then come back to an unrelated promo or vignette; when the show returns, their opponent will get their full entrance; the two will wrestle for a few minutes, and then the show will break yet again. It can feel like ten minutes or more have gone by before any meaningful action has taken place. Add to that some really short actual matches, and it can suck the energy out of the home viewer.

In the arena, they combatted that pretty effectively. If the commercial happened during a match, obviously the live crowd got to see the action, so never really lost the steam. But for the other breaks, they would engage the live crowd with various opportunities to get on the big-screen, like the DX Cam (which saw people give crotch chops); the Rest in Peace Cam (Undertaker impressions); or the ever-popular “Sign of the Night” – for the record, I thought the giant Hank Hill head should have won, but instead it went to a little kid’s sign for Sasha Banks and Naomi. 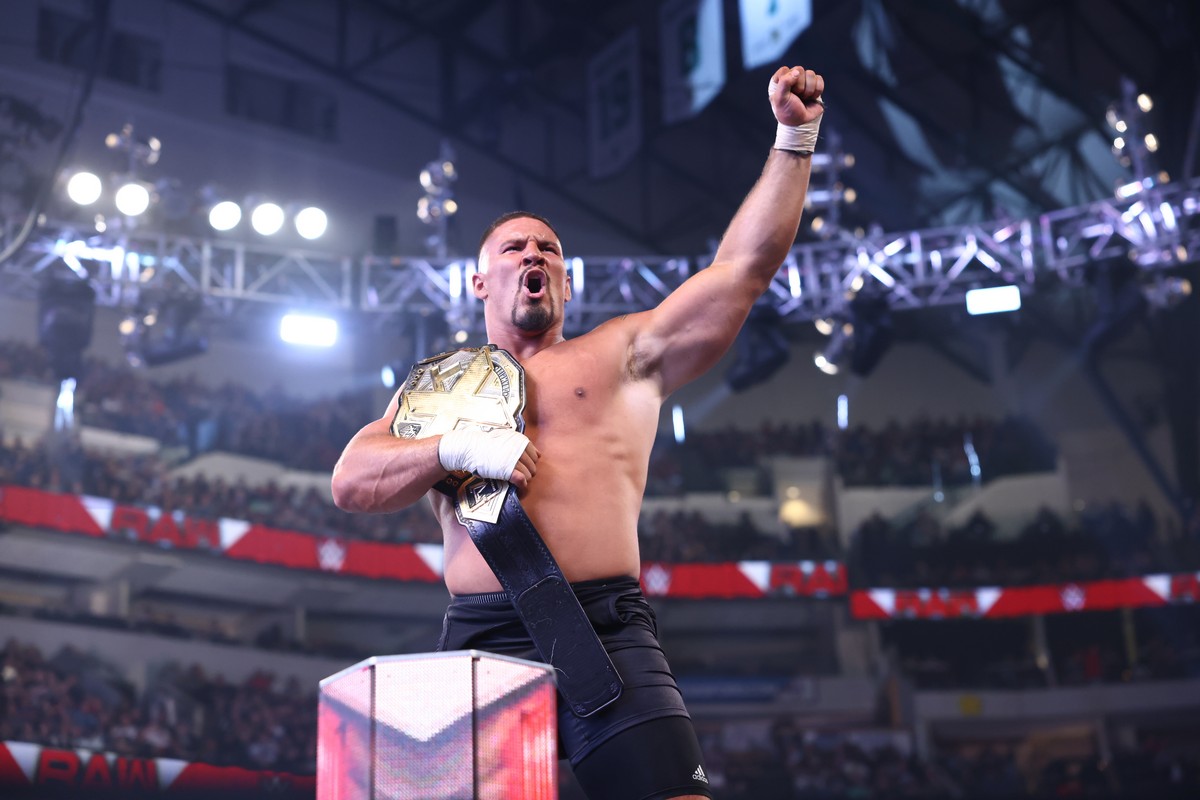 There were only a small handful of times that it felt like the crowd had tapped out, based on the silence in the building. The lengthiest of which was during the match between Bron Breakker and Dolph Ziggler. But by the end, even they were able to win the crowd over, as the fans really got into the finish of the match and the title change. 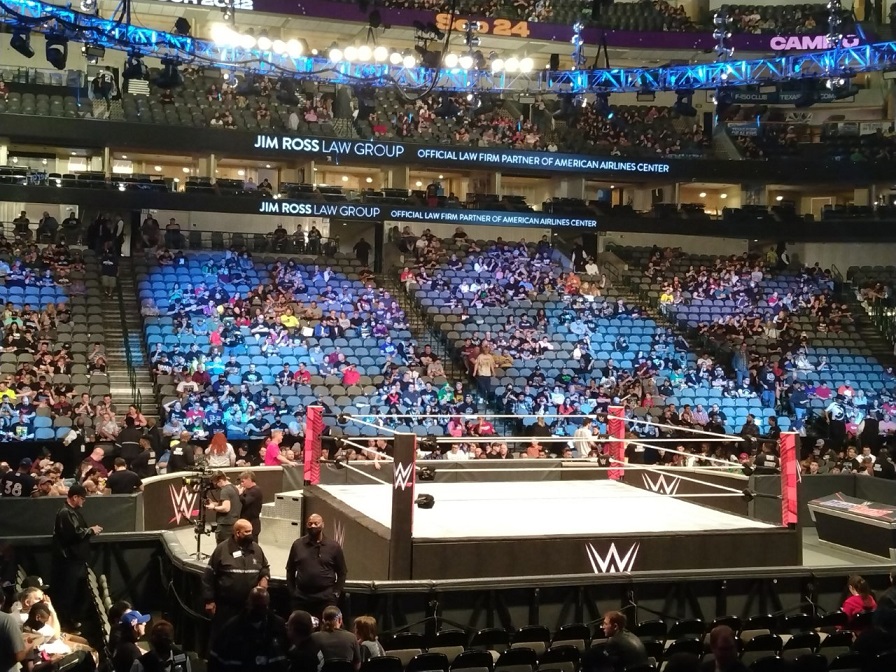 The American Airlines Center starts to fill up before the post-Mania edition of RAW. Photos: Bob Kapur

As loud and excited as they were, the live crowd was very subdued compared to some of the epic post-Mania RAW audiences of recent years. Perhaps it was because there appeared to be a lot fewer international fans in the audience, and they tend to be the most rowdy? But there wasn’t a “Fandango-ing” moment that people will remember for a long time.

There were a few times where it seemed like the crowd would take over and press their own agenda – they tried to drown out the Edge and Damian Priest promo (and credit to those two for rolling with the punches and improvising responses); and during the six-man tag team match they started singing “Seven Nation Army” but even that had some relevance to the match, as it was the entrance music for Pat McAfee who faced Austin Theory the night before – so it wasn’t as if it was a complete takeover. 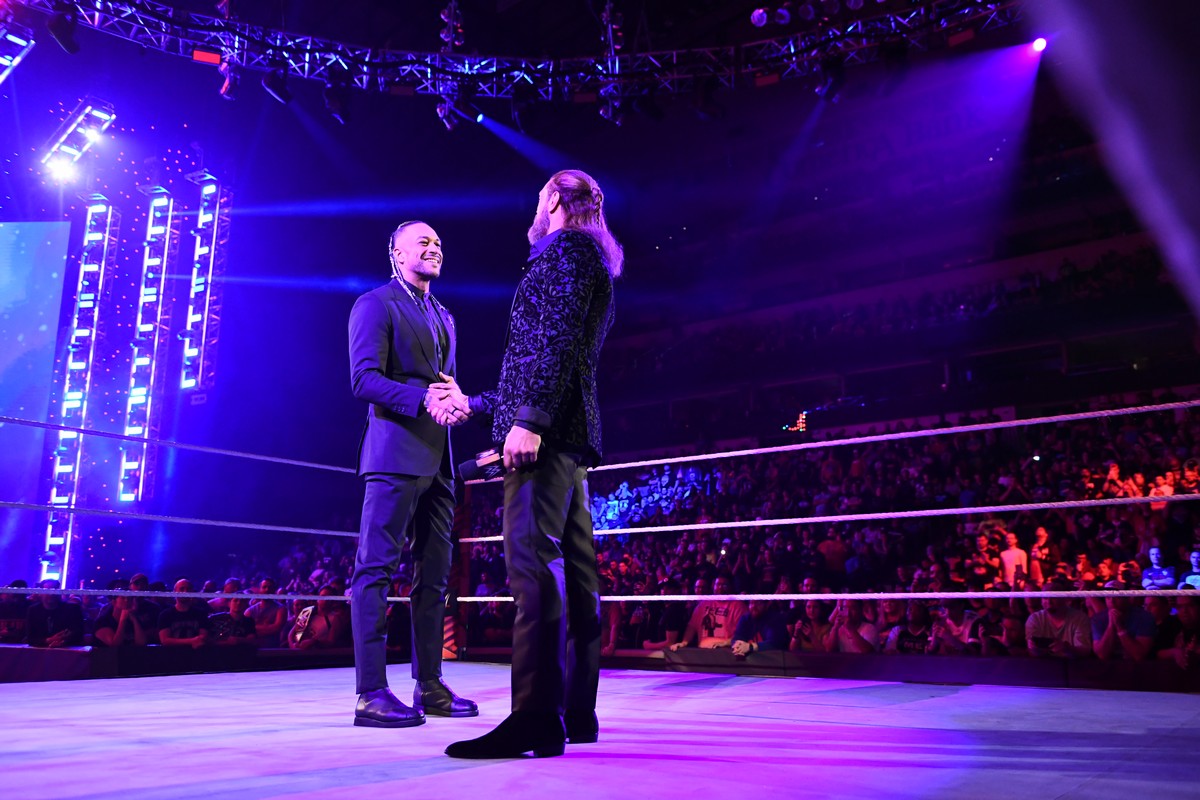 Edge and Damien Priest at Monday Night Raw at the American Airlines Center in Dallas, TX, on April 4, 2022. WWE photo

And the show didn’t really offer up many chances for that kind of thing either. In one weird moment, during the Women’s Tag Team Championship match, the DX theme randomly started playing, causing the competitors to pause and look up at the ramp in confusion. But that gaffe garnered only a very small and short “You f’d up!” chant. Whereas in the past, it may have triggered a whole night of the crowd singing that song.

Overall, though, the audience never really tapped out on the show. They remained enthusiastic and engaged during the untelevised main event, which saw Cody Rhodes defeat Kevin Owens, who earlier in the night, during a commercial break, came out to the entrance ramp and issued the challenge.

They stayed with those two competitors for their entire match (Rhodes won cleanly after a Bionic Elbow and a Cross Rhodes), continued cheering and chanting during his post-match promo (the WrestleMania “Travel Package!” chant got a lot of love here, and he egged the crowd on for that one, and rushed to the railings to get an autograph or a selfie with him, as he spent a good twenty minutes circling the ringside area for an impromptu meet and greet.

Based on my informal post-show survey conducted in the concourse, outside the building, and in a couple of nearby bars (writing for Slam is a tough gig), attendees really enjoyed the show, and felt it was a great capper to WrestleMania weekend. 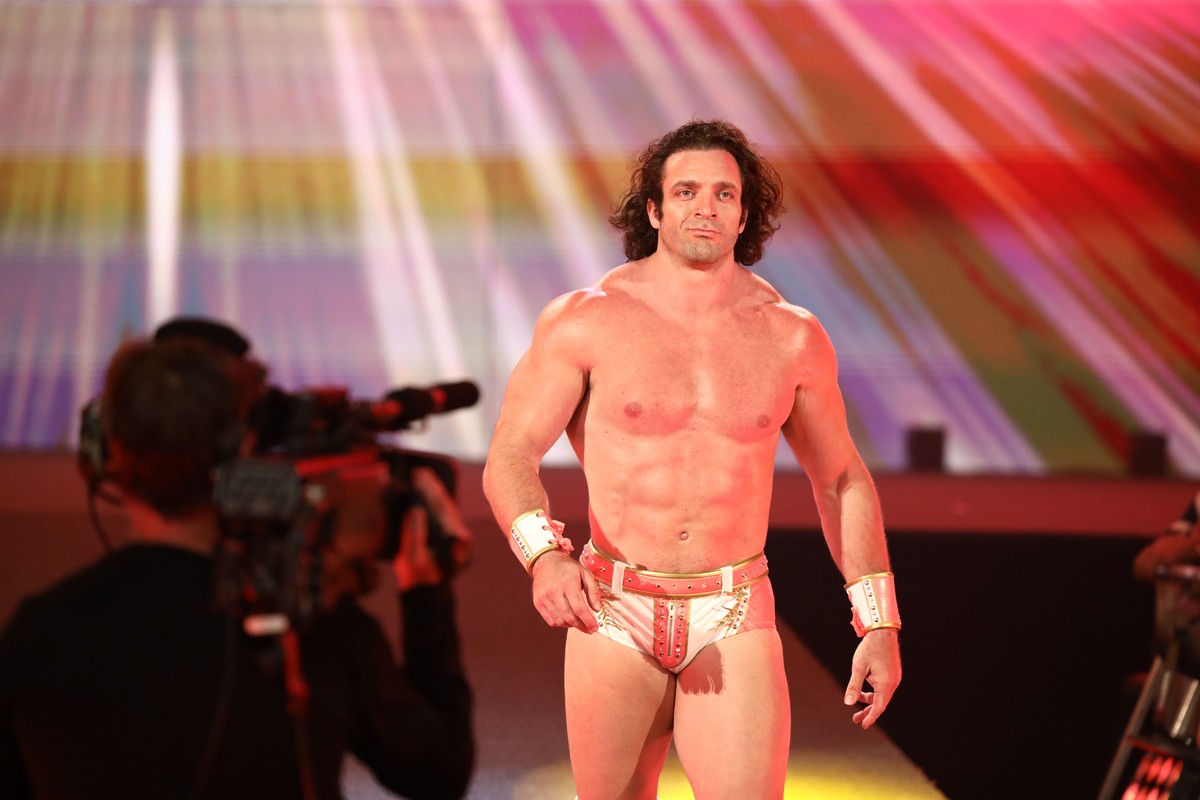 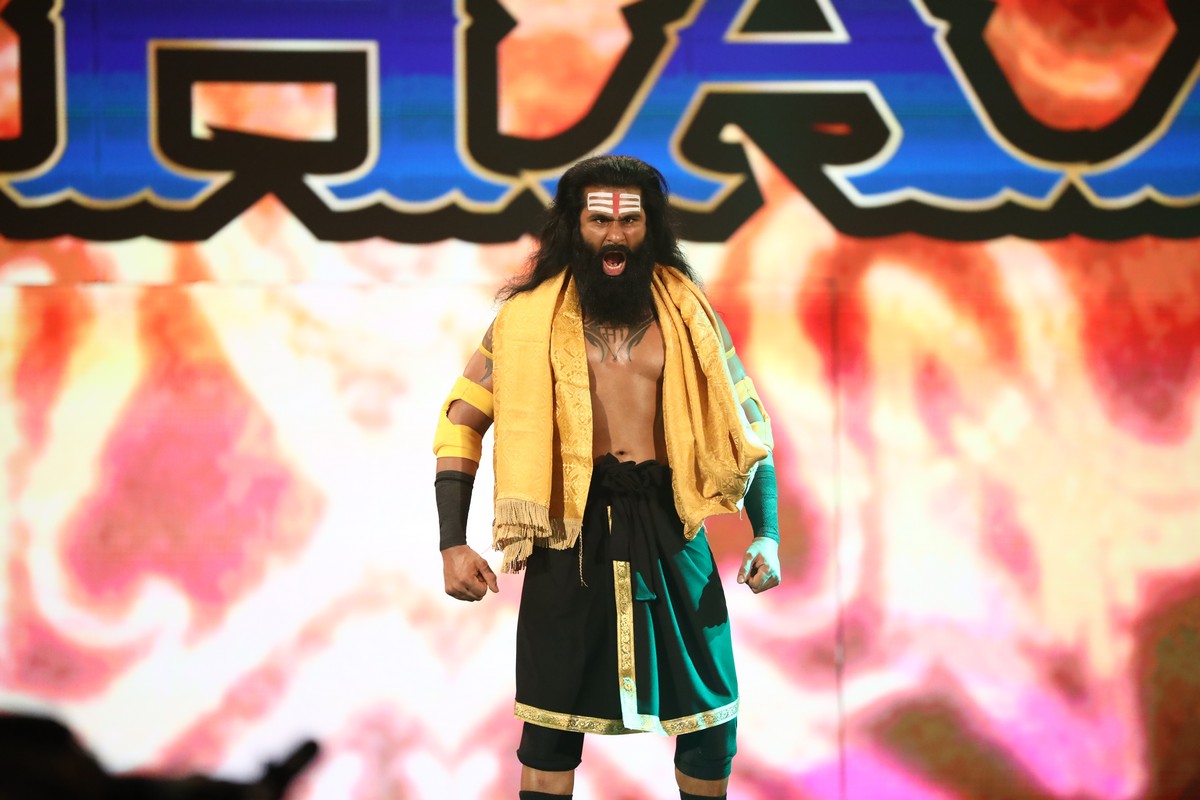