The Raw after WrestleMania is a fresh start for familiar faces 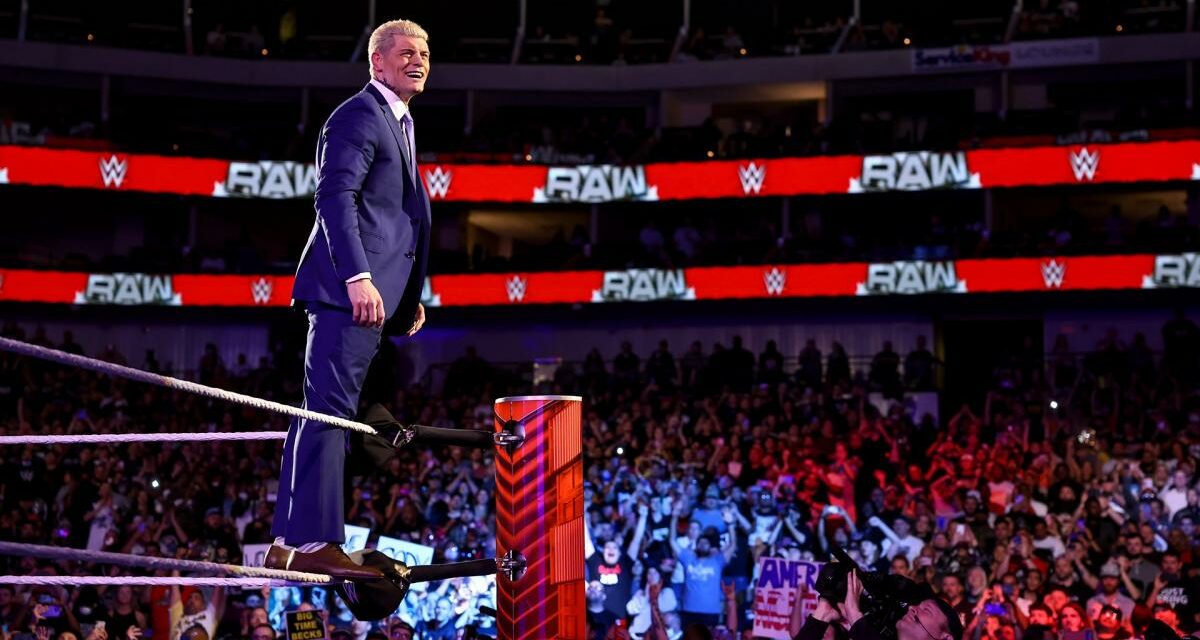 It’s something like New Year’s Day in the WWE, with some new storylines and new characters emerging after WrestleMania. The fans were energetic, the matches were solid, and … wait, is that Elias?

We get a review package for both nights of WrestleMania, in which the hands-down most impressive feat was finding the angle and clip to make the stunner on Vince McMahon look legit.

Not surprisingly, the first one out on the stage is Cody Rhodes, savoring another hero’s welcome with a lengthy entrance. He takes a moment to compose himself during chants of “Cody” and “Welcome back”. He looks back on the 47 days since he became a free agent and the easy decision to come back to WWE.

He pays tribute to his father, bringing his image up on the big screen and pointing out the championship belt in his hands after a count-out win against Superstar Billy Graham at Madison Square Garden in 1977. Cody tells the crowd that after hearing the story of how his dad had won the match but not the WWWF title, the same title that would be eventually held by the likes of Hulk Hogan, The Undertaker, Shawn Michaels, and Triple H  (only Hogan’s name got boos from the crowd), it became his life’s mission to win that championship for his dad. 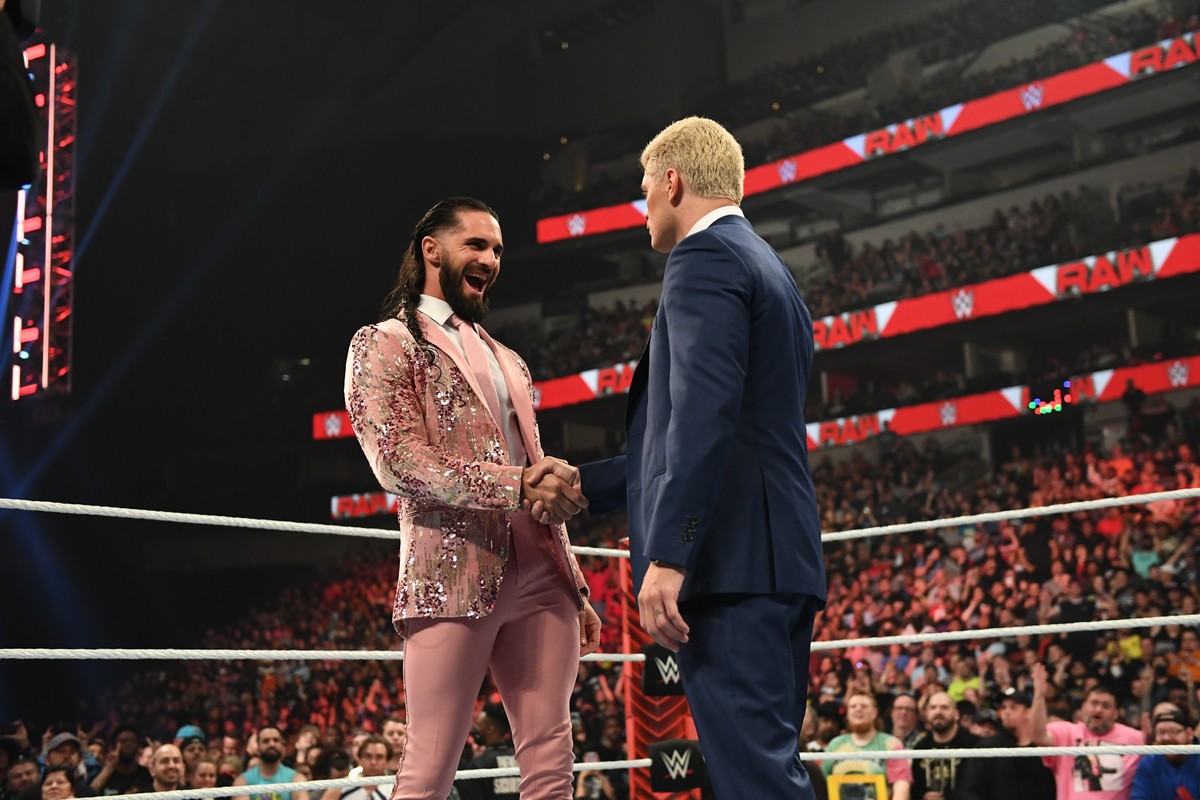 At the end of this impassioned speech, Seth Rollins prances out and down into the ring, where Cody offers him a handshake. Rollins accepts it and tells him “Welcome home” before leaving as quickly as he’d arrived.

It’s always important to take a moment and express how dumb a Championship Contender’s Match is. It would be akin to the winning prize of a lottery being an opportunity to try and win the lottery.

Ripley shows off some strength early with a headbutt and an extended suplex on Naomi, but the new tag champ slides under a high kick to tag in Banks and they drop a splash and split-legged moonsault combo on Ripley. After Banks, Naomi, and Ripley take turns diving onto one another outside the ring, we go to commercials and return to find Ripley catching a boot to the head from Naomi. 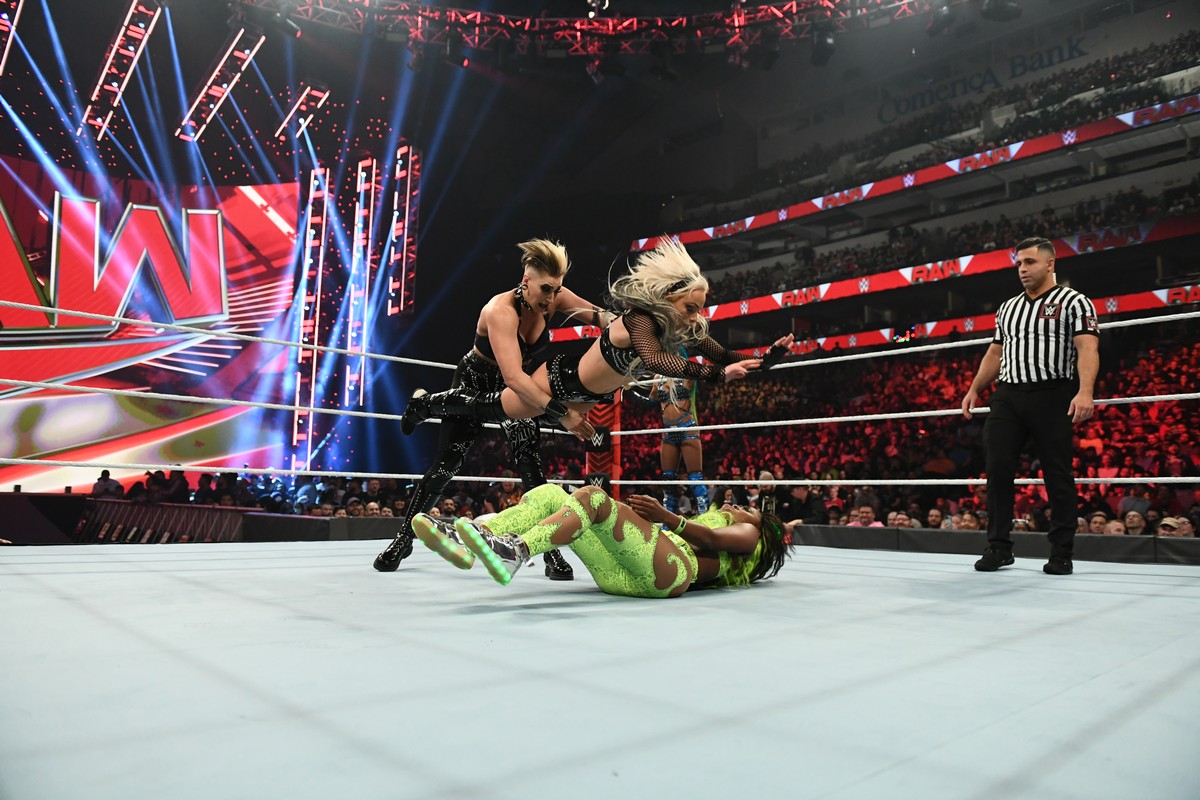 Rhea Ripley and Liv Morgan work together against Naomi at Monday Night Raw at the American Airlines Center in Dallas, TX, on April 4, 2022. WWE photo

Both teams tag and Banks delivers three meteoras to Morgan in the corner, and as she drives Liv to the mat with another one from the top rope Graves points out that Sunday featured Banks’ first WrestleMania win. Sasha is hoping to go for a Bank Statement, but Morgan wriggles away and tags in Ripley, allowing them to connect with a double-team powerbomb. The champs counter right back with their own double-team move, the assisted Codebreaker with a little extra somersault for fun.

The camera lingers on the challengers after the match as Ripley walks away from Morgan, frustration on her face. Uh-oh, there’s trouble in latex land.

Next in the ring is Kevin Owens trying to explain away his loss to Steve Austin on Saturday (an injured back being one of his reasons), he is interrupted by a newcomer … sort of. His name is Ezekiel, and after a few seconds of trying to figure out who he looks like, the commentators point out that it’s Elias — with no beard, and in a simple set of trunks. 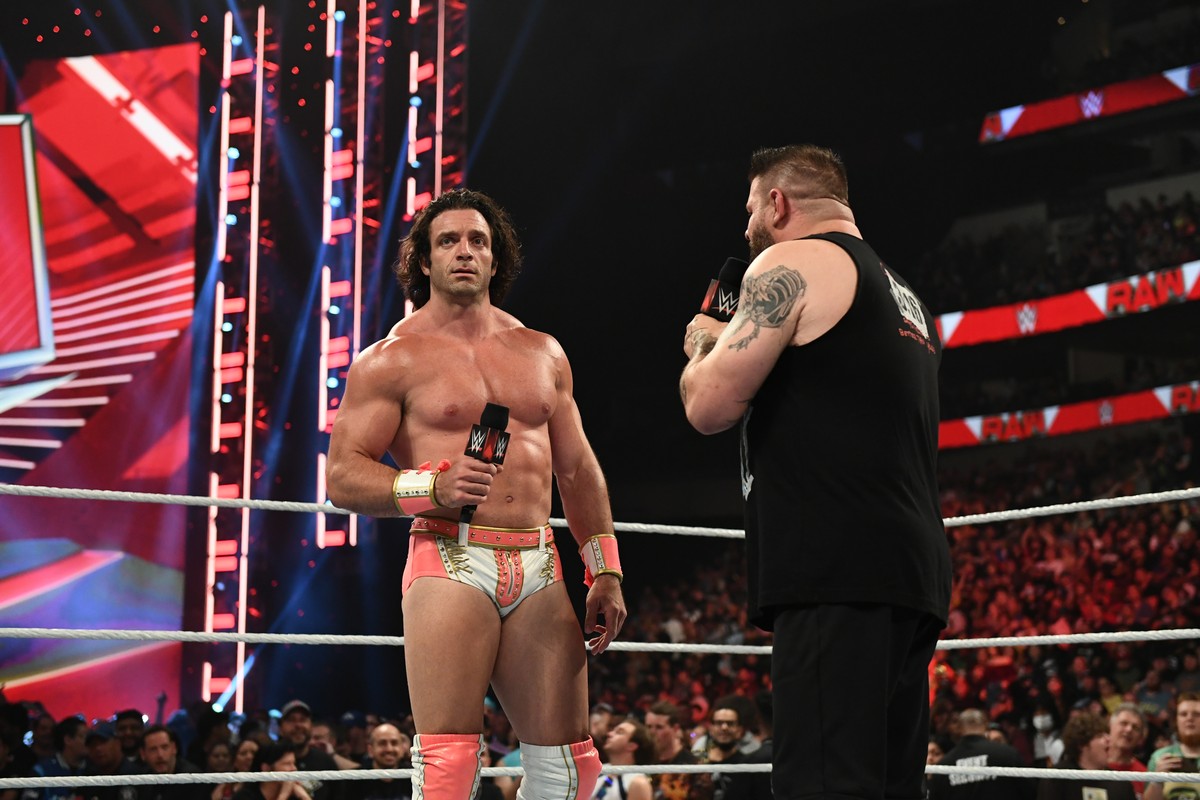 Ezekiel arrives and talks with Kevin Owens at Monday Night Raw at the American Airlines Center in Dallas, TX, on April 4, 2022. WWE photo

Owens asks Elias where he’s been, but Ezekiel simply keeps repeating that he is Elias’ younger brother. Owens is not in the mood for this and gives Ezekiel 10 seconds to get out of the ring. When Ezekiel stands his ground, Owens leaves instead. 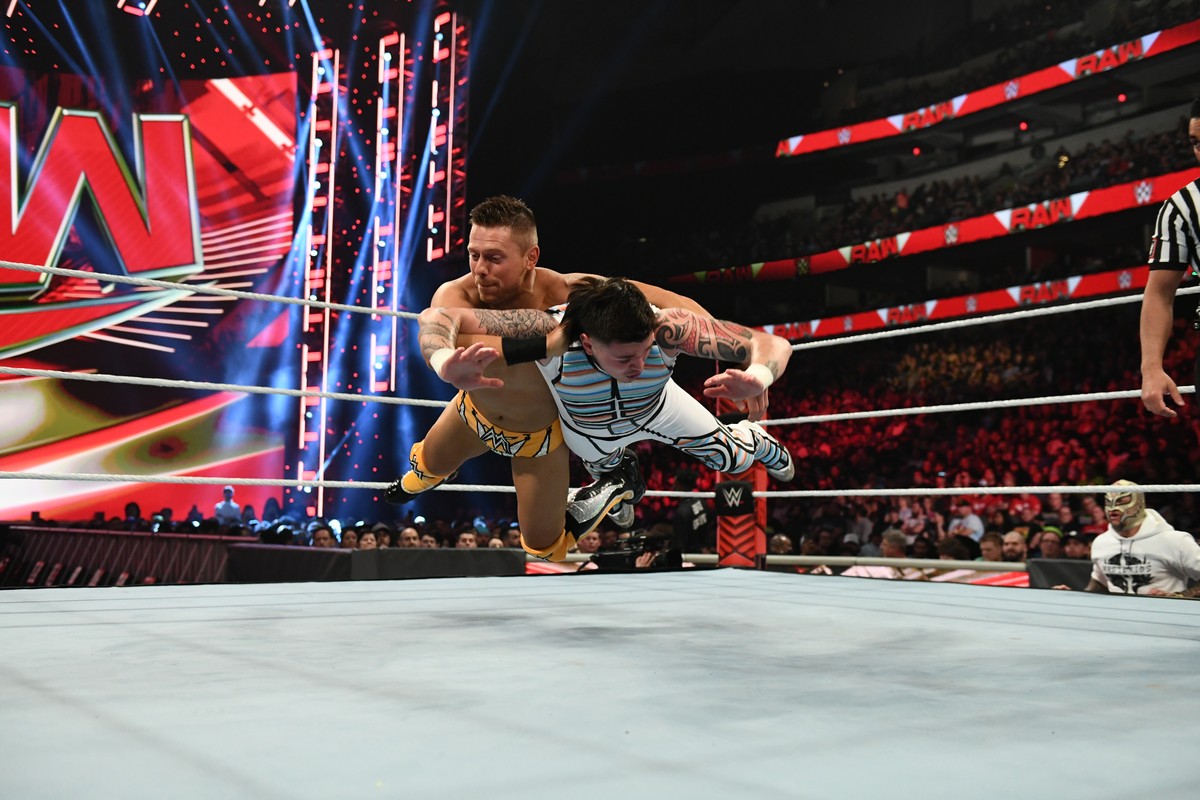 The Miz finishes off Dominik Mysterio at Monday Night Raw at the American Airlines Center in Dallas, TX, on April 4, 2022. WWE photo

Mere moments into the match, Miz hits the Skull-Crushing Finale as the only move of note — and it’s enough.

As Miz celebrates, though, his spotlight is stolen by the arrival of Veer Mahaan. Miz scampers out of the ring, but Dominik and Rey stick around only to be kicked and clotheslined, and Mahaan finishes with a clutch submission on Dominik. 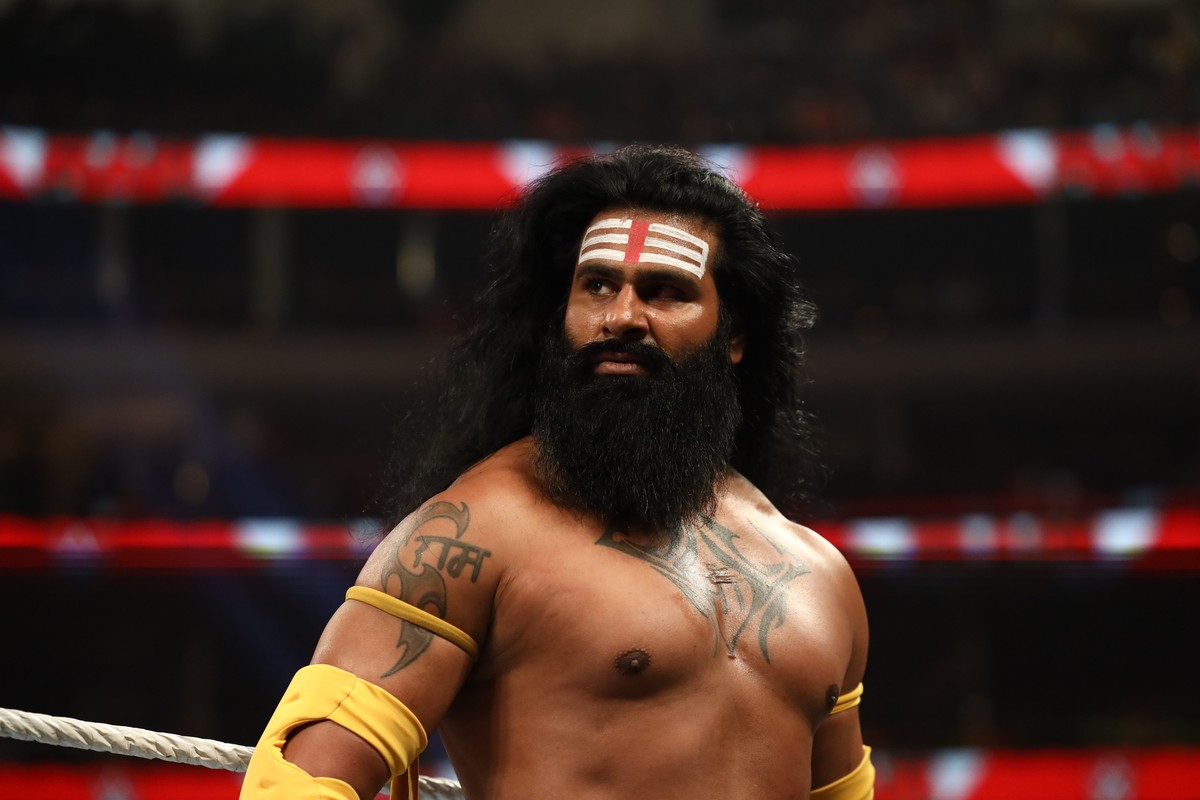 After a break, WWE Raw Women’s Champion Bianca Belair is in the ring, revealing the shiner left by that kick to her face by Becky on Saturday. She thanks Becky for forcing her to become better and vows to be a better champion for the fans. She gets a strange reaction from the crowd, at least it’s the first time I’ve ever heard it: along with a “You deserve it” chant there was a competing “No you don’t” response. It wasn’t as loud, but I was surprised to hear it at all. 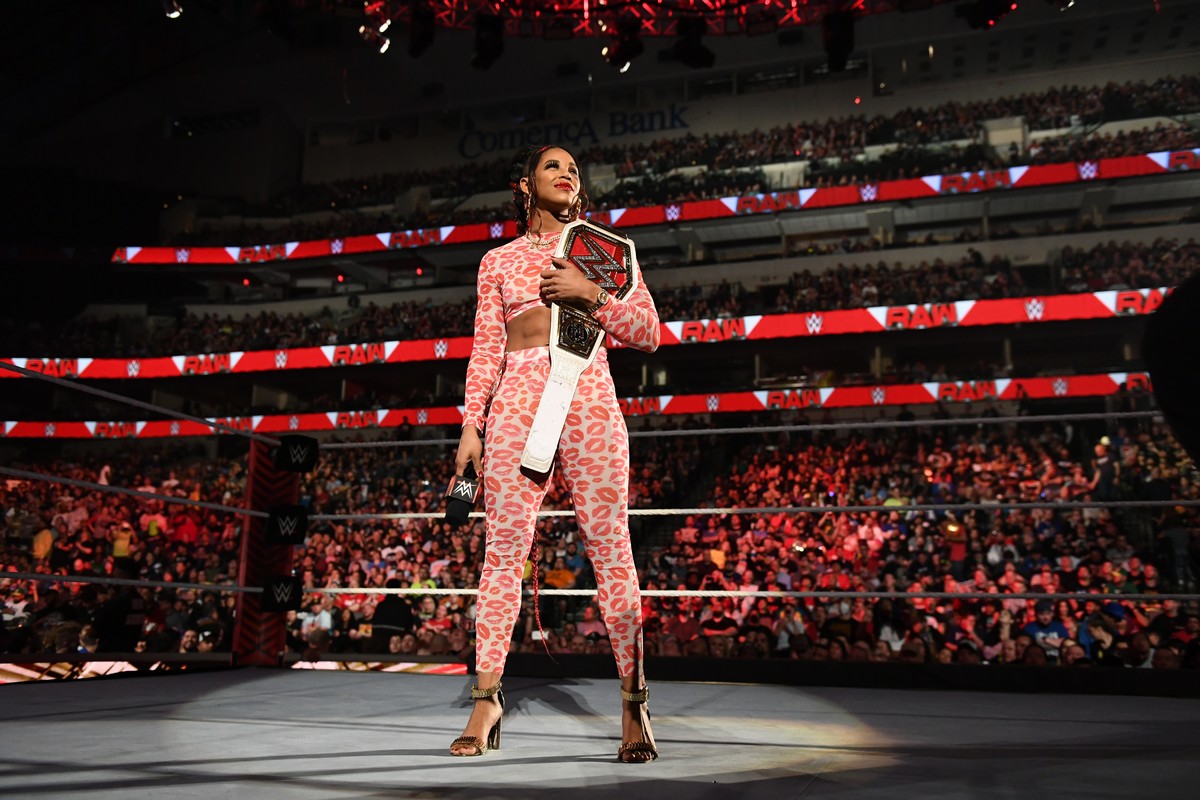 Breakker opens with power moves, picking Ziggler up at will and running him into the corner pads, while Ziggler resorts to running and landing impact moves like a standing elbow drop. Still, Breakker’s style seems to be winning as he grabs Ziggler out of the air, spins him, and slams him hard to the mat. 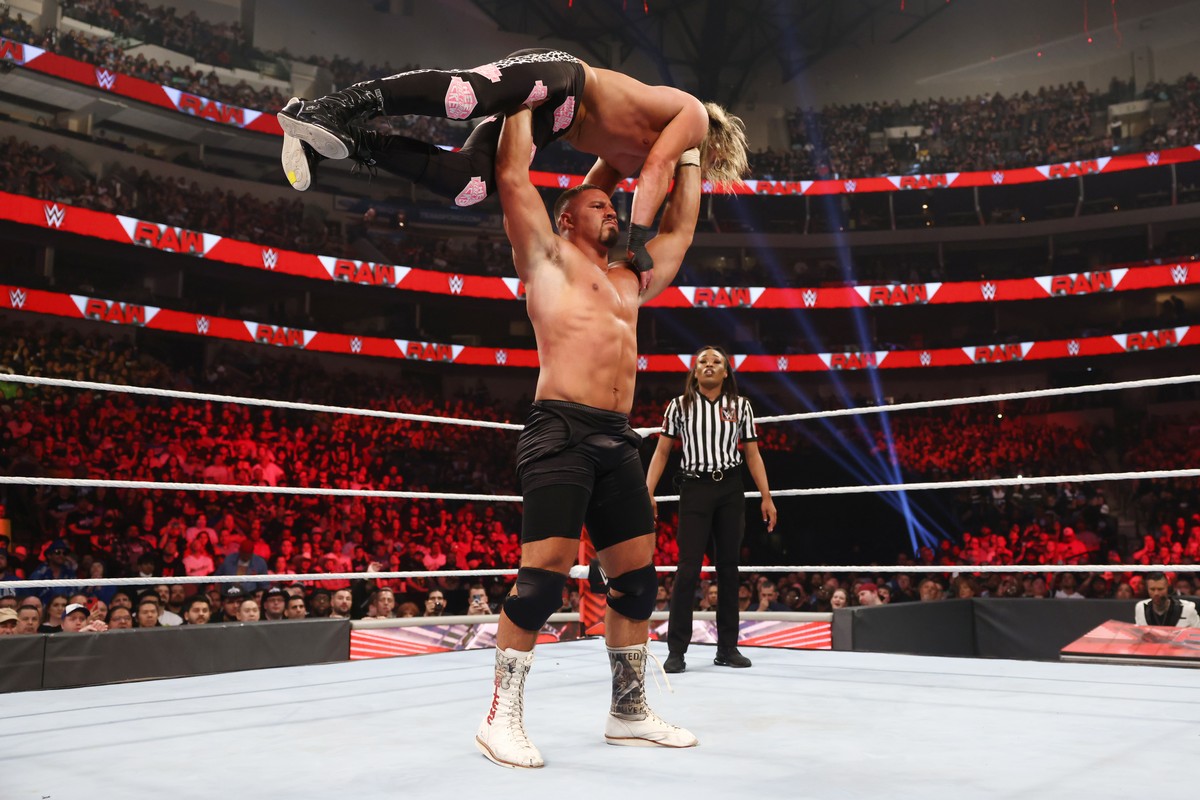 Coming back from a break, Ziggler drops the challenger with a dropkick as the lively crowd breaks into a chant of Seven Nation Army for Pat McAfee’s sake. Breakker tosses Ziggler over his head and barks for the crowd before leaping over the top rope to take out Roode. With Breakker getting back into the ring, Ziggler hits a Famouser for a two-count, a superkick for another two, but, moments later as Ziggler readies another superkick, Breakker nails him with a spear and his military press slam for the win.

Next is MVP buttering up the crowd for Bobby Lashley, praising his accomplishments while also pointing out that he has been doing all of these amazing things without the help of MVP. Lashley enters the ring and greets MVP with a hug, and calls Omos the strongest man he’s ever been in the ring with. Guess who’s finished listening to this? Omos makes his way down the ramp and faces off with his WrestleMania opponent, demanding a rematch. 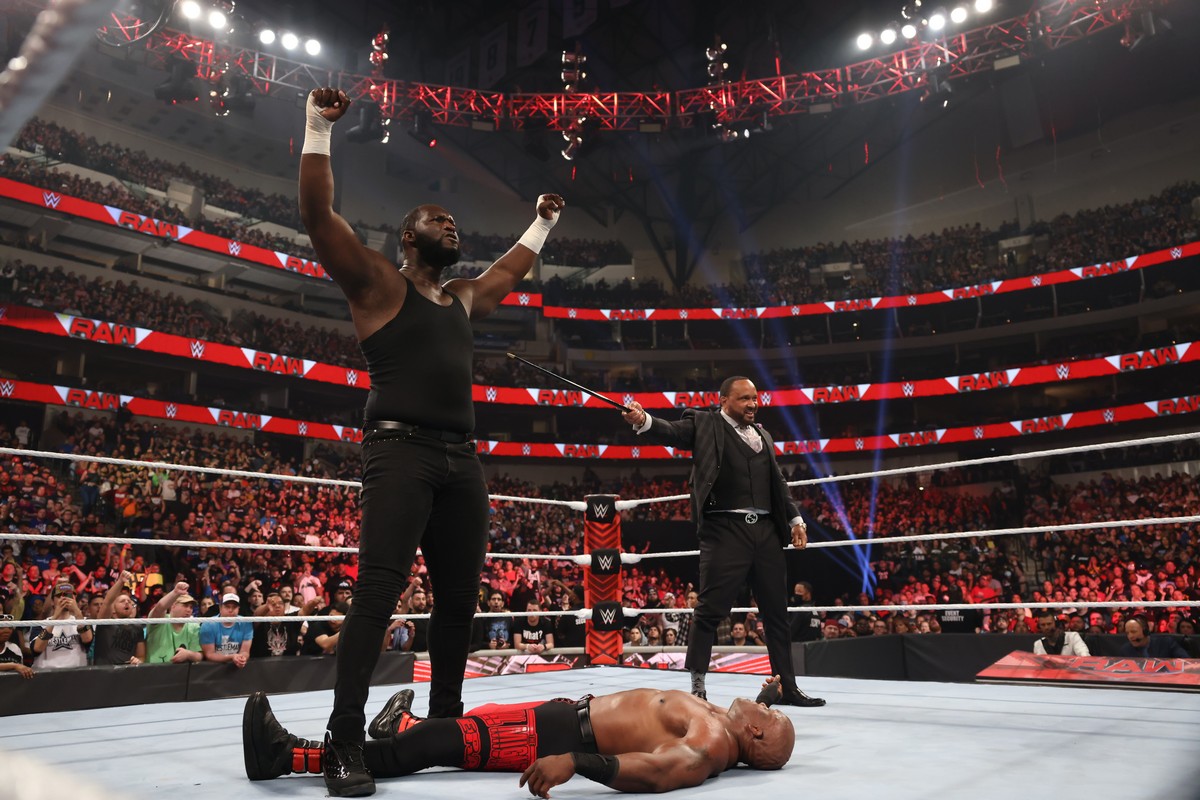 Omos and MVP stand over Bobby Lashley at Monday Night Raw at the American Airlines Center in Dallas, TX, on April 4, 2022. WWE photo

MVP, showing why he was making the point of Lashley not needing him, attacks Bobby from behind before directing Omos in laying him out. MVP adds a running kick to the face before Omos hoists Lashley up and dumps him flat on his back. 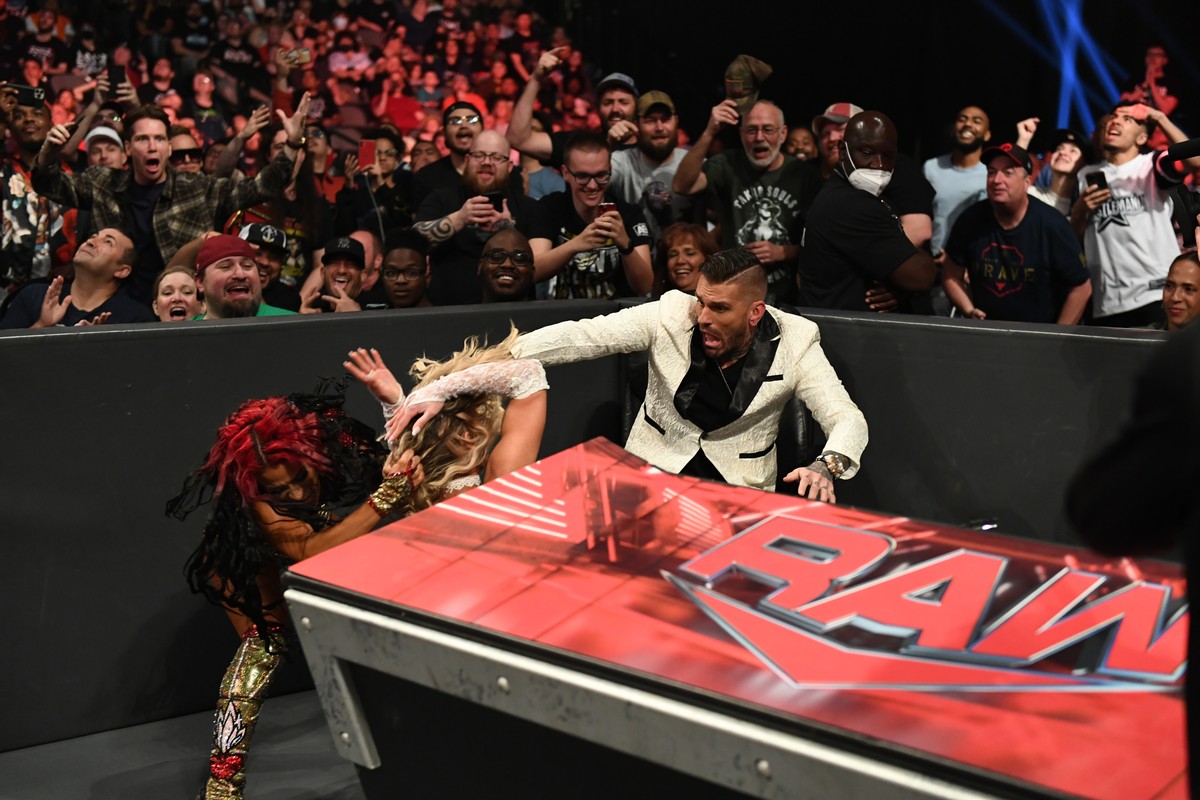 Zelina Vega and Carmella go at it as Corey Graves gets out of the way at Monday Night Raw at the American Airlines Center in Dallas, TX, on April 4, 2022. WWE photo

After more ads, the newly-former WWE Women’s Tag Team Champions head to the ring for a match. Before their opponents arrive, though, Zelina Vega grabs a mic and blames Carmella for their loss. She attacks her partner, chasing her from the ring and into the protective arms of Corey Graves while Vega departs. Carmella and Graves make out and she feels better.

Backstage, The Usos make fun of Austin Theory, their partner for tonight, for his loss on the weekend. Austin vows that tonight he gets back on track.

Balor gets to start against Jimmy as Graves mentions that the United States Champion is probably a little bitter about not being included in WrestleMania. Preach, Corey. Riddle enters off a tag and is driven into the opposing corner where first Jey and then Theory tag in delivering blows to Riddle. As Theory stays in the ring, he’s serenaded by another go at “Seven Nation Army”, much to his displeasure. 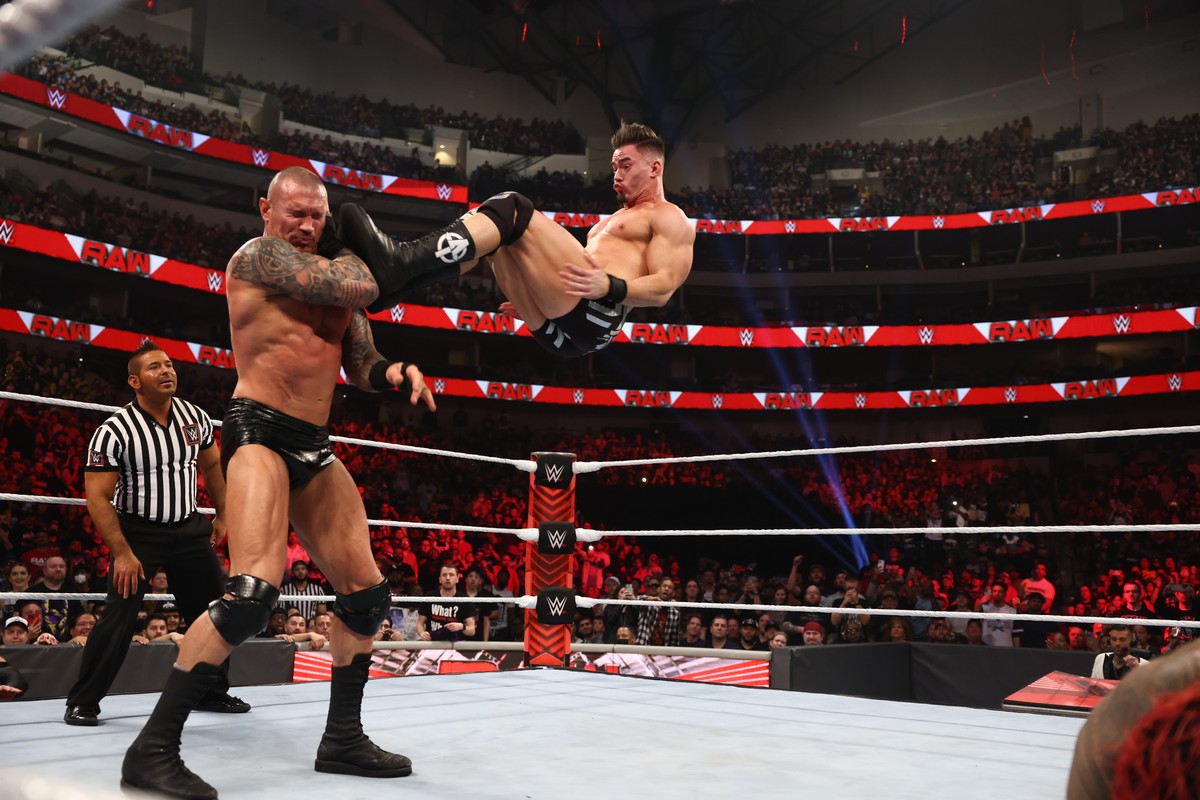 Riddle tosses him over the top and is thinking of following with a standing moonsault off the apron but is yanked down onto the apron himself instead. Returning from ads, Riddle is doing his normal thing of taking a lot of punishment until he can finally tag in Orton — maybe he’ll shake things up tonight and tag in Balor instead.

Nope. A knee to Jey’s face allows Orton to enter and do his paint-by-numbers sequence of scoop slam and hangman’s DDT on Jimmy, but he misses a blind tag by Theory to enter the match with a dropkick. Everyone comes in with big moves, but the last one belongs to Theory with an ATL for the win.

Immediately following the match, Edge strides to the ring, clad in gothic clothes and very, very dark lighting. He introduces the man who respects his vision, and the man who will be the punishment for the guilty: Damian Priest.

Priest talks about how he heard Edge’s message, which was intended for AJ Styles but he felt like it was for him, and he now pledges his loyalty to Edge. As Edge continues on saying that Styles was judged guilty by himself and Priest, AJ heads angrily to the ring and drops both Priest and Edge, setting up Edge for a Con-Chair-To before Priest recovers and roughs up Styles, combining a leg sweep with a spear by Edge. 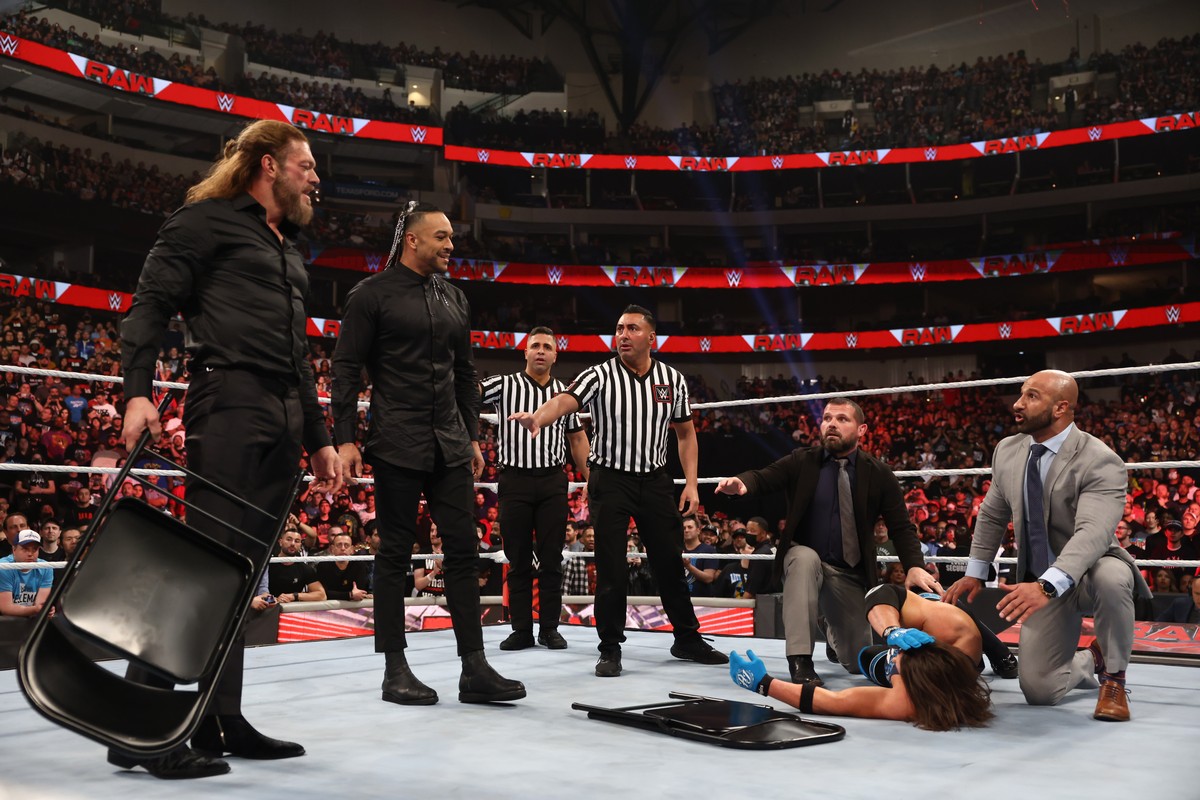 AJ Styles is protected by referees and agents from Edge and Damien Priest at Monday Night Raw at the American Airlines Center in Dallas, TX, on April 4, 2022. WWE photo

Edge prepares his own Con-Chair-To, but Adam Pearce, Jamie Noble, and some other officials arrive to stop him — the crowd recognizes Jamie’s efforts with a nice “Thank you Noble” chant.

Before the bell, Gable and Otis attack the Profits in and out of the ring, bringing out Adam Pearce to change the match to a Texas Tornado contest and the bell finally rings. Ford breaks out his over the corner post dive early, but the Alpha Academy soon slows the match to a crawl, keeping the Profits grounded.  After ads, Gable hits a moonsault from the top rope while Otis lands the corner bomb, but neither can get a three-count.

Gable directs Otis to get a table, which he sets up in the ring, though it’s Gable who ends up perched up on it and receiving a top rope splash by Ford.

The Bloodline comes to the ring to close out the show, and Paul Heyman runs off the financial success of the WWE over the past year, attributing it all to Roman Reigns. Roman Two-Belts is showing no sign of a troubled arm despite all the hubbub after last night’s main event. He quickly dismisses Brock Lesnar and he’s ready to move forward. He promises to reveal the “next step” for the Bloodline on SmackDown and that’s it for the show.

Live crowd smaller but no less enthusiastic at post-Mania RAW

Many of the matches were repackaged versions of what we already saw at WrestleMania, but there was some good promise for the future. Rhodes, Edge, Priest, and “Ezekiel” all put their stamps on the show tonight and that’s enough to look forward to for now.