No ropes are no problem at NJPW’s Hyper Battle 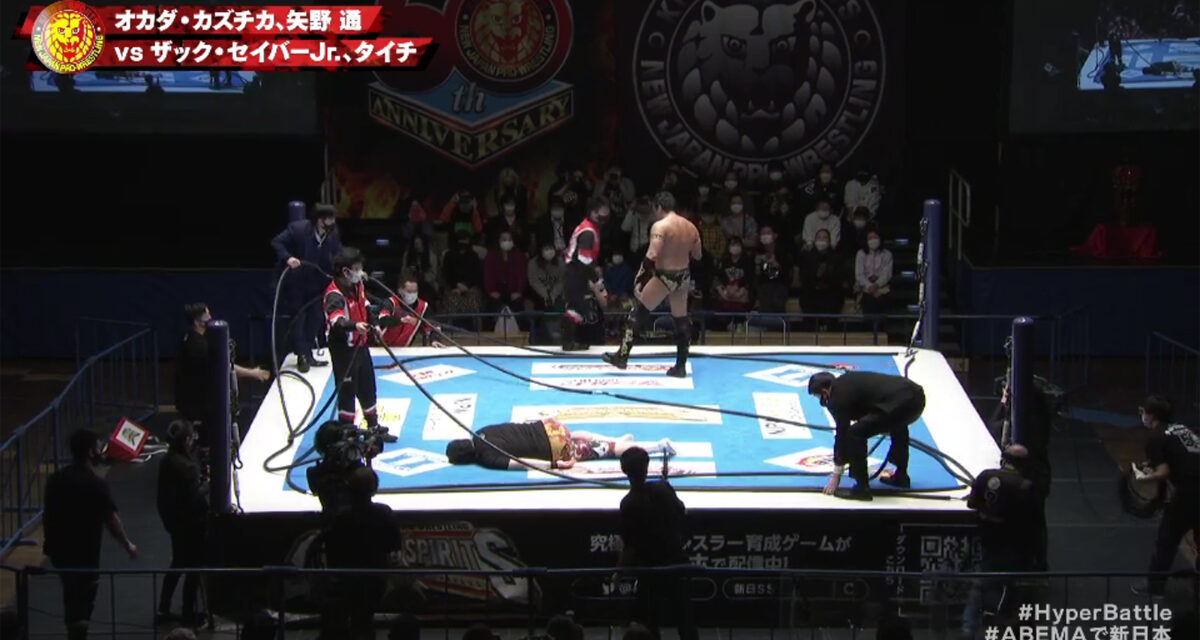 It was back to a cluster of tag team matches as NJPW kicked off their Hyper Battle tour from Korakuen Hall. Unfortunately, except for the main events many of the matches were predictable with Bushi, TAKA Michinoku and Jado having to eat the losses as they have done so many times recently. The unpredictability used to be the hallmark of NJPW. It is the booking approach they need to desperately get back to.

Before the main event, The House of Torture (Yujiro Takahashi and EVIL) took on Los Ingobernables de Japon (Tetsuya Naito and Hiromu Takahashi). 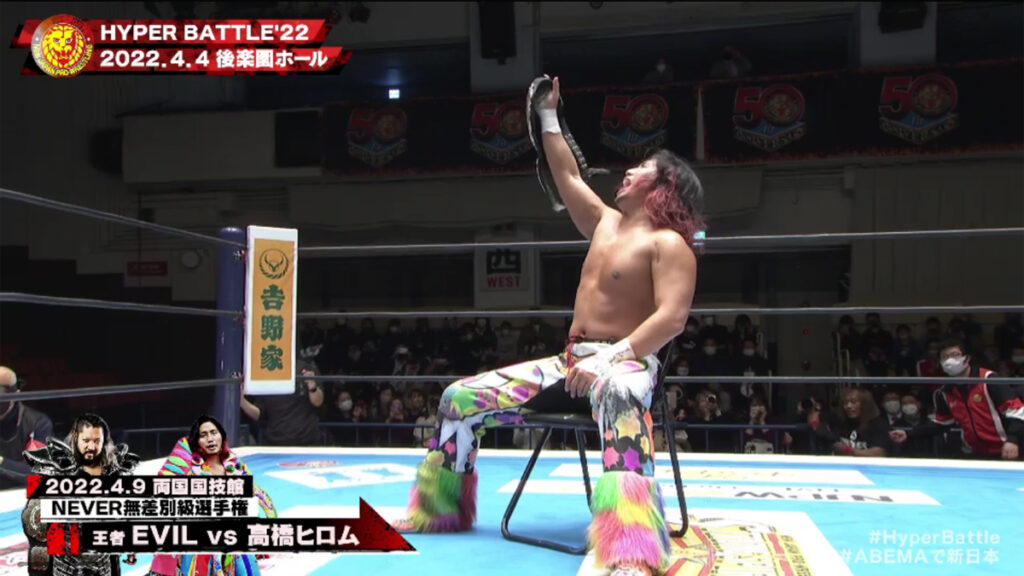 Hiromu super kicked Yujiro in the face so that Naito can pin him with the sneaky roll-up he does. Naito and Hiromu played hot potato with the NEVER Openweight Championship which pissed champion Evil off. Evil had a hissy fit and started throwing steel chairs and turnbuckles into the ring. Hiromu caught one and sat down on it so he can trash talk Evil some more.

Naito unfolded another chair for Hiromu to sit on after Evil left. Ever the prankster, Naito pulled it out from under Hiromu who landed on his ass. Naito then acted as security for Hiromu while they headed to the backstage area making sure fans gave him and the NEVER Openweight Championship room. Funny that. 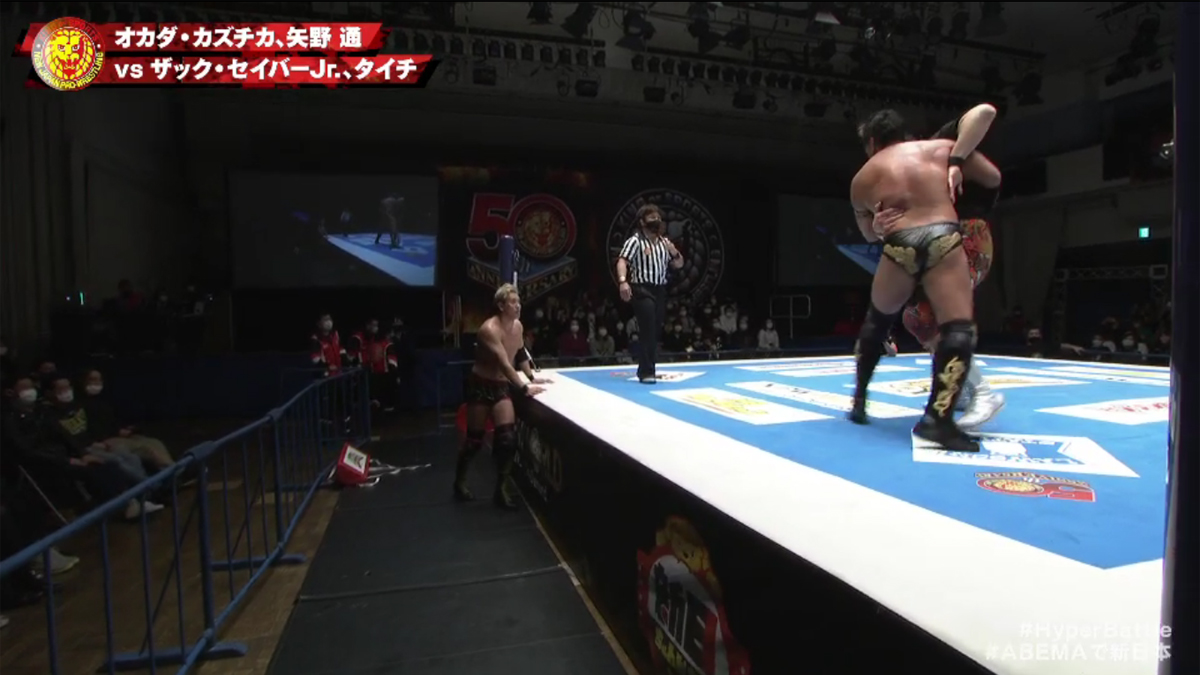 The ropes are gone but the match goes on. Courtesy: NJPW.

During a funny bit, Taichi threatened the announcers and some of the crew to help him unscrew the ring ropes while the official was down. I am guessing that will be the stipulation when he challenges Yano for the King of Pro-Wrestling title. He then made them remove all the ropes and the gear from the ring. Both teams wrestled the rest of the match with no ropes.

When Taichi tagged Zach in, Zach stepped over imaginary ropes which made the crowd chuckle. Sabre Jr. laid out Okada with a Zach Driver, blocked Yano’s low-blow turning that into a submission move for the win.

Phantasmo pins Oiwa with CR2. After the 1-2-3, Ishimori puts a crotch crusher of some kind on Taguchi on the floor while Master Wato and Phantasmo brawl in the ring. Phantasmo punches Wato in the “lower abdomen”. Phantasmo and Ishimori pose with the champs’ belts.

Suzuki-gun double-teams Bushi for the win.

Gedo is supposed to wrestle in the match but bows out. Fale takes his place. Owens knocks the heck out of Jado with his knee trigger finisher. GoD saves Jado from taking a brass knuckle shot from Gedo.

Dick Togo tries to sneak his garotte into the match. As the official is busy with him, SHO low-blows Desperado, retrieves his wrench and hits Taka in the head with it. SHO goes through the motions of putting on the Snake Bite submission. 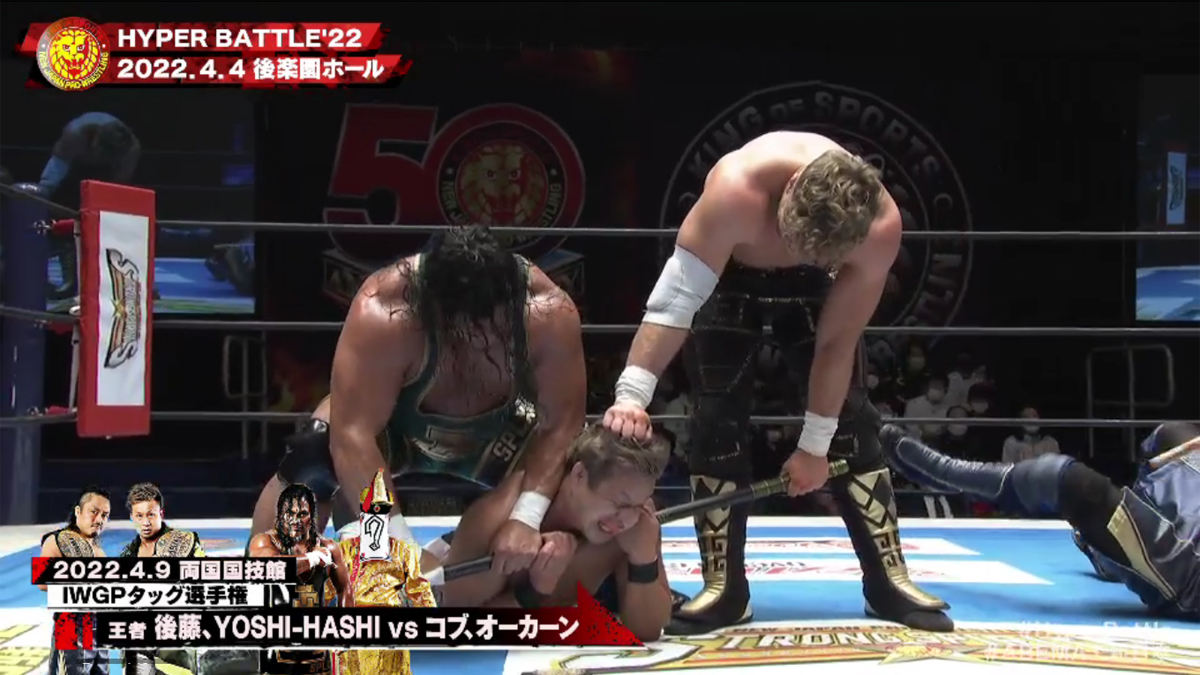 Yoshi’s own staff is used against him. Courtesy: NJPW.

Ospreay pins Yoh with a Hidden Blade. Khan and Cobb take Yoshi and Goto’s staves. Makabe and Yoh leave as Yoshi and Goto confront Khan and Cobb. Henare and Ospreay attack from behind. Cobb and Khan strangle Goto and Yoshi with those staves. As the heels look to bash them with the staff some young lions and officials storm the ring. Yoshi and Goto wrestle back possession of their staves.