AEW Rampage: Bask in the Glory of a Powerhouse main event 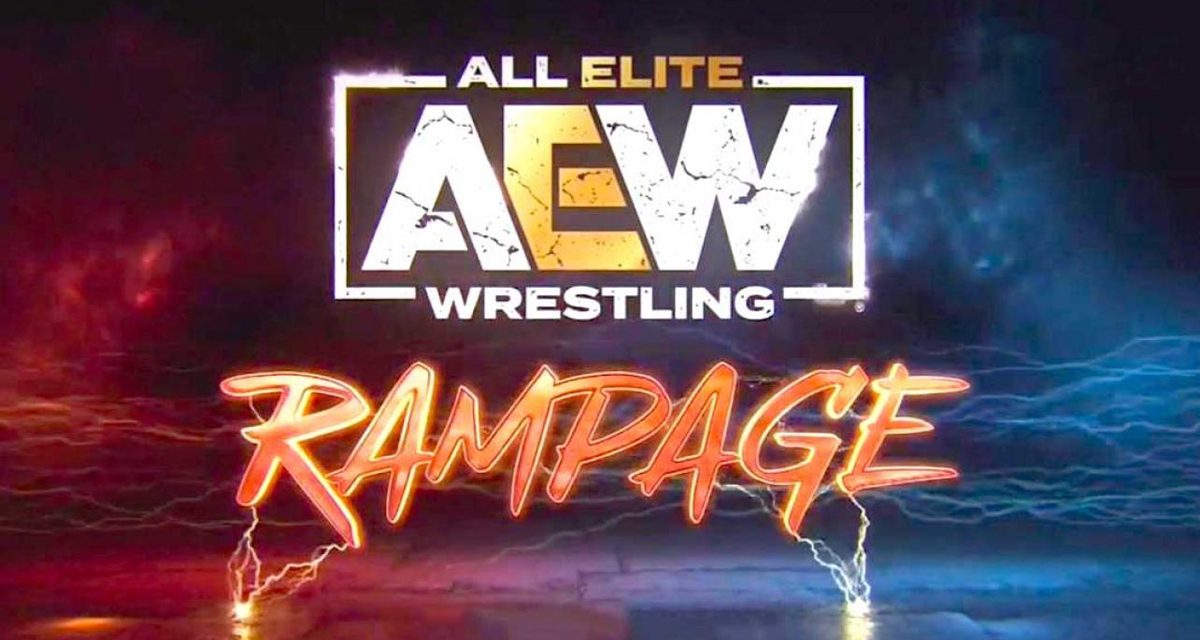 That’s coming up later in the program, as we come to you from the Colonial Life Arena in Columbia, SC. Excalibur, Chris Jericho, Ricky Starks, and Taz have the call, and we have the First Match of high flying expectations as it is a rematch between … 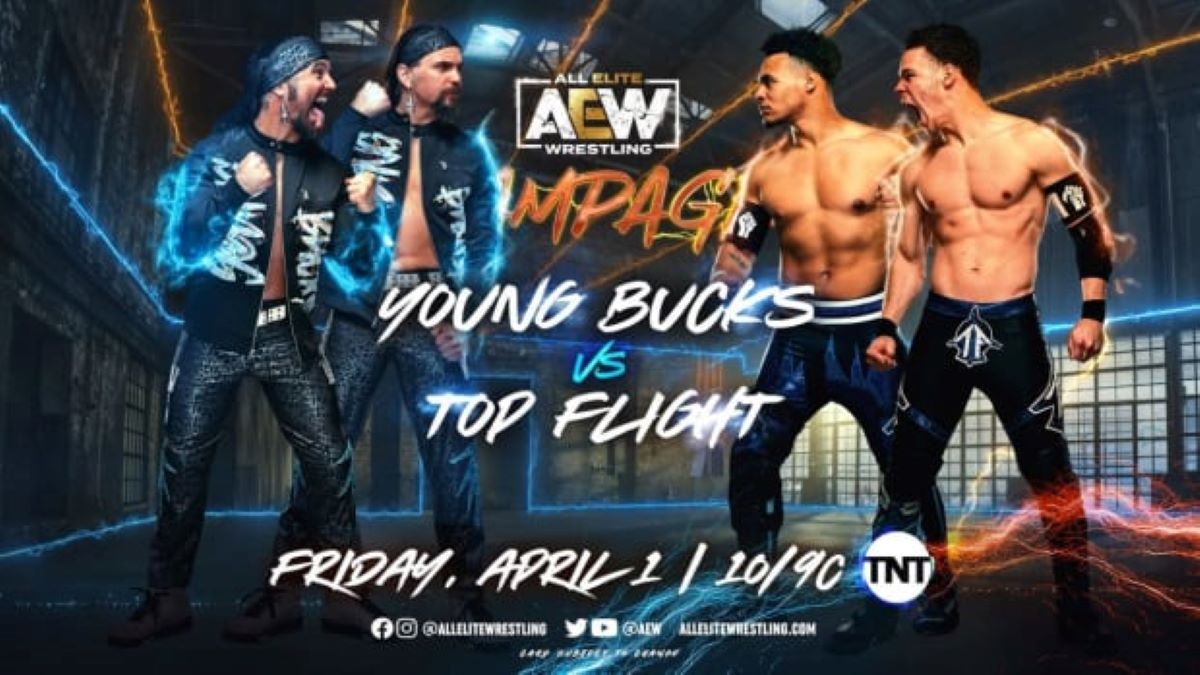 This is a match of breakneck speed that covering the action in any logical sense is near impossible.  Top Flight are flying high, as they take the driver’s seat early.  Once the action goes outside the ring, Top Flight gets invitations to a Superkick Par-tay.   Darius is in the ring with the Bucks, as they deliver a buckle bomb/kick to the head, and this Top Flight member is grounded during Picture in Picture.

A rare miscue by the bucks gives Darius enough separation for the hot tag to Daunte, and he becomes a Top Flight en Fuego, just bouncing throughout the ring, clearing house. At one point, Matt gets in a Top Flight double team, with Daunte getting a leapfrog to Nick’s back, and then sends him back to Darius with an impressive deadlift suplex for a pin cover, but Matt breaks the count.  The match devolves to a Pier Four, and Darius is in the ring with Nick, landing a Spanish Fly to the Young Buck, and he now goes for the pin, but Nick rotates through it, and Matt gets back in for The Young Bucks to nail the BTE Trigger that secures the pin and the win.

As always, watching those two go leaves me winded, and I need to up my cardio.

We go to a recap of the feud with “Legit” Layla Hirsch and Kris Statlander, and the Galaxy’s Greatest Alien is now showing her dark side.  So, wait…should I call her Darth Statlander?

Now for something I care less about, Dan Lambert, Ethan Page, Scorpio Sky, and Paige VanZant are in the ring, they’re shocked (Shocked, I tells ya!) about how Sammy Guevara and Tay Conti “defiled” the belt.  Oh, the outrage! That brings on the JumboTron (or is it the All Elite-Tron?  Anyone?) The Spanish God is in a parking lot, and he’s with his partner in crime Conti.  They take sledgehammers at Lambert’s car, as he helplessly looks on at the vandalism.

So…Guevara and Conti are the ‘faces, right? Because this feels very WWE, circa “Attitude Era.”  Or is it just me?

No, I blame the children…and TikTok for this.

Tony Schiavone is backstage with Hook for his (first?) interview, but up pops Danhausen. He says hello, and he’s very nice, very evil, here to take over TV, and yadda yadda yadda he was the fan favorite, until Hook, so he puts the Curst on Hook and…he walks off. Danhausen can’t figure out what just happened.

Hey, man, that makes two of us.

Speaking of things I don’t understand, here is your next match…

Jericho asks my question: Why is Fuego part of the Dark Order?  I know I missed some wrestling of late but seriously, who threw this on the wall hoping it’ll stick together?

In any case, When Dark Order faced the House of Black, they were an even match.  Once Fuego got tagged in, say “so long” to any ring advantage for The Dark Order team.  I like Fuego Del Sol, but at this point, he is just “Marko Stunt 2.0”, as he bumps for all members of the House of Black.  Evil Uno and Grayson get back in the ring to even the odds, but King and Matthews send them back outside, where King gets on the ring apron and launches himself to a cannonball to the Dark Order on the outside.  Del Sol and Black are alone in the ring, and someone is feeling froggy…err, Fuego.  Del Sol attempts a Lionsault, but Black nails the Black Mass as he is in mid-rotation and the Sol sets on this match

Your Winners via Pinfall:  The House of Black

Jericho calls the House of Black the “Sports Entertainers of the Week.”  I’ll go with that as well.

Off to a video promo, as Brandon Cutler is with The Young Bucks fresh off their recent win.  They list their accolades (including the NJPW Tag titles-both the junior *and* heavyweight, thank you very much Brandon…now , shut up!)), and they call out FTR, who haven’t earned the same.  Last time, Matt reminds the Top Guys, they beat them for the tag belts, and it’ll be more of the same. Next week in Boston will be the rematch, as they tell Brandon to shut the hell up.

Next up in the ring, we have the…

This is a good women’s hard-hitting match, and that scratches my itch.  Blue and Hayter go hold for hold and Blue manages to get the best of Hayter.  Blue rushes at Hayter in the corner, and Hayter catches her and hits what Taz calls “a high collar suplex” right into the turnbuckles.  From there, Hayter slows the pace and gets Blue up for a delayed suplex, but wiggles out to get a roll-up for a two count.  Blue goes for high offense as she attempts a crucifix powerbomb, and then a sunset flip, but she can’t put her away.  Blue goes up the top turnbuckle for a high-risk maneuver, but Hayter cuts her off at the pass.  They fight for dominance, but it’s Hayter who delivers a superplex to a brain buster, and then a ripcord lariat puts the exclamation point on the pin.

Your Winner, and Qualifying in the Owen Hart Cup Tournament:  Jamie Hayter

Penta Oscuro is with Alex Abrahantes, who’s looking with each passing day like Gomez Addams’ more homely cousin.  Anyway, Penta Says (via Abrahantes’ translation) to The House of Black don’t forget about Death Triangle. You know that Penta knows Cero Miedo against those dudes

It’s time now for Mark Henry to get words with Powerhouse Hobbs and Keith Lee before the match.  The Hall of Famer starts with Lee before Hobbs interrupts and promises The Limitless One, he’s going to hit that spinebuster. Lee agrees with Hobbs that he is a powerhouse, but it seems he needs to check himself, and Hobbs needs to Bask in Glory as his end is near.

With that, Henry says, “Enough talk.  It’s time for the Main Event!” 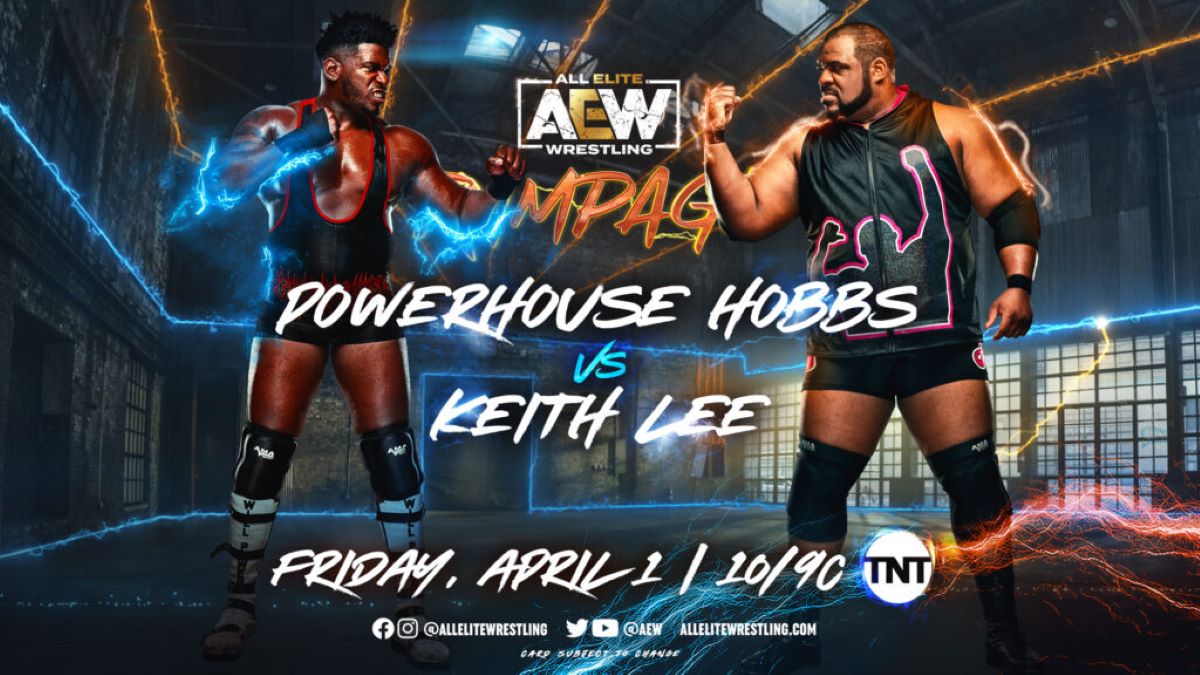 Not since Vader versus Stan Hansen have we seen two big behemoths like this in the ring.  Hyperbole aside, to quote Todd Keneley, this match looks like it will go to the land of the big uglies. The fans are solidly behind “Limitless” Keith Lee, and they bask in his glory (which is better than getting behind a “Bearcat”, but I digress).

The bell rings, and neither man is back down, and there is no give.  Truly a match of an Immovable Force versus an Unstoppable Object, but Lee is agile enough and more powerful than Hobbs to send him out of the ring.  That’s enough for the Powerhouse to rethink his strategy during Picture in Picture, and Lee gives chase to the upstart on the outside.  Lee tries to slam him on the concrete, but Hobbs shoves him into the ring post.  He gets running speed and crashes all his weight toward Lee into the guardrails.   Hobbs is back in the ring, mocking Lee as he wants fans to bask in his powerhouse glory.  Lee struggles to his feet until Hobbs adds more injury to insult.

Once he allows Lee back in the ring, Hobbs keeps the Limitless One grounded with knee strikes and a sliding clothesline to cover but gets a two count.  Hobbs goes for a hip toss, but Lee shakes his head “no”, and hits a short-arm clothesline to return the receipt to Hobbs.  Lee covers for a two count.  He tries his Spirit Bomb finisher, but Hobbs counters with a massive backdrop. Hobbs is back in control, and sends Lee to the ropes and executes an impressive power slam for a two count, but it was a thing of beauty seeing hobs effortlessly slam 300-plus pounds like it was nothing.  Lee starts to head butt Hobbs, and that gets Starks and Taz to leave commentary and start swinging chairs at Lee, who just swats it away.  Starks is stunned, and then Swerve makes his way ringside, and goes after the Team Taz member, as the ref tries to get back control.  Hobbs uses the distraction to hit the spinebuster for the pin, but…no ref to make the count.  Frustrated, Hobbs grabs the ref to do his job, and that’s enough time for Lee to get back to his feet and get the Powerhouse in position for the fireman’s carry powerslam to a pin for one, two, and three.

There’s no time to Bask in his Glory, as all Team Taz gang up on Lee and Swerve.  Starks is cut open at the eye brow, but he gets the Roshambo to Swerve on a table outside the ring. Lee looks on, and Hobbs nails a steel chair to his spine. Taz directs traffic outside and tells his guys to set up a table.  Le is still fighting back and has Starks by the hair, but Hobbs tackles him into the table in the corner, and all Team Taz celebrate as the show goes to black.

It was a good, solid show, that was “all gas, no brakes.”  Hobbs and Lee were the best part of the night with Big man Action, and Top Flight/Young Bucks stole the show.

Honestly, I could have done without the Dark Order/House of Black match, but if it builds to a matchup with Death Triangle, so be it.

For now, I need to get some sleep, o see you in seven!