SmackDown: Are you ready for WrestleMania? 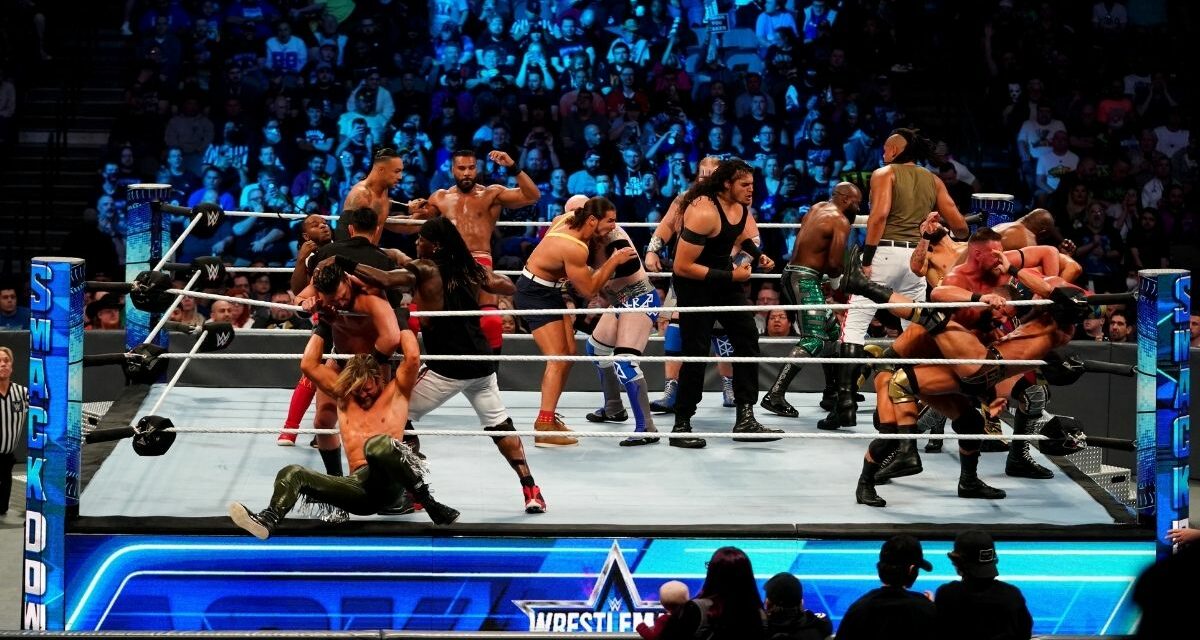 Tonight’s Friday Night SmackDown event is being broadcast from Dallas, Texas, which, you might have heard, is home to WrestleMania 38 on Saturday and Sunday.

They had the Andre the Giant trophy set at ringside for the Rumble fight. Andre the Giant had a nearly 50 years running in the wrestling business. The first to be inducted into the WWE Hall of Fame.

Dolph Ziggler, the NXT champion, and Finn Balor, the Raw US champion were present during this match.

Not even 10 mins into the brawling, R-Truth was already thrown out, so was Tinder… oops, Jinder Mahal. Happy Corbin shows up to encourage Moss. There was so much happening that I couldn’t see.

I could have sworn that Shanky was trying to pull The Undertaker by attempting to do a chock hold and failed. He seemed lost at the start with the camera zoomed into his face.

Moss wins the trophy by eliminating Ziggler, Robert Roode and Balor. After being awarded the trophy, Moss made an annoying joke involving something Texan and laughed at himself. When I make jokes to make myself burst, their actually funny.

Ricochet (c) vs. Humberto vs. Angel

Ricochet is greatly outnumbered by both members of Los Lotharios. Leaving his skills to present itself tonight was potentially risky against both tag brawlers.

Angel kicks Rico’s back and chest. Both “cousins” had a plan from the beginning to eliminate Ricochet together and fight for the Intercontinental Championship.

An arm drag from the top rope to Rico’s body was accomplished by the Lotharios boys. The cousins have been basking in the booing provided by the crowd. Dallas wanted to see these two cousins fight each other the moment Humberto tried for the win.

Rico jumps from Angel then onto Humberto’s shoulders and flips him over.

Rico does his 630 move onto Angel, kicks Humberto knocking him out for the win.

Naomi and Sasha Banks vs. Carmella and Queen Zelina (c)

This match is the opportunity to get some momentum against the reigning tag champions for Naomi and Banks. Let’s see how that goes, wrestling fans.

Carmella is wearing one of her glittering masks to protect her face. Is Carmella wearing a bra? I feel like it might… unclip.

Carmella tries smack talking Sasha by saying she’s nothing compared to her. Zelina and Carmella had a good standing at the beginning of the match till they got the carpet taken from under their feet.

Sasha jumps from the top rope onto Zelina followed closely by Naomi with a ‘Moonsault’ from the top for the win. My queens have been getting on stupendously.

Kayla Braxton had an early interview with Ronda Rousey during sparring training.

Rousey said she’ll apply her anger accordingly given the heated confrontations she and Flair had the past couple of weeks. She swears she’ll be either going home with Flair’s previous title through submission and/or make her tap out.

The outfit Flair came out in tonight was a slightly see-through two piece, the top part, however, wasn’t my cup of tea. But Flair would say: “That’s cool!”

As Moss polished his Andre the Giant trophy backstage, Happy Corbin scared him with Drew McIntyre’s sword. I honestly thought it was him. It would have been amusing if Drew really did show up behind Corbin and beat his face in. Come out from the shadow and pull an Undertaker, please. It’s the prince of darkness night this evening.

As Pat McAfee dances to Shinsuke Nakamura’s entrance song on the announcement table, Austin Theory shows up, grabs McAfee’s ankle and flips him. So, as usual, McMahon’s lap dog flees, and  McAfee follows him to the big boss’s office.

Since Pat wasn’t able to get a hand on Theory because McMahon came between them threatening to fire him, McAfee had to return to his seat. Aw, rats! It’s not Paul Heyman this time.

This is another momentum match between the champions and the opponents.

The Usos are the longest reigning tag team champions, so taking this match is a good way to analyze the enemies’ skills. Austin Theory comes in to interrupt again, the petulant child, throws a cup of ice paid by a fan to McAfee’s face. He restrains himself beautifully as Finn Balor comes out from nowhere, I thought he left after the first match of the evening, and drags Theory by his roots.

During the break, this match has turned into a six men fight with Balor teaming with Boogs and Nakamura while Theory sticks with the Usos. I personally didn’t know why Theory had to team with the champs, but someone had to take him, I suppose.

Austin kept his eyes on McAfee during this abrupt brattle. I’m starting to think he secretly loves McAfee. While Boogs does his usual human weightlifting move as he holds Finn, I think he’s wasting time.

Finn flew from the ring onto the Usos and Theory. Balor brings Theory back into the ring as McAfee cheers for Austin to lose. Austin is able to secure a win by doing a human helicopter move and have Balor’s face land on his knee much to McAfee’s disappointment.

Winners: The Usos and Austin Theory

Welcome to Happy Talk with Nappy Corbin and Madcap Moss.

Does Moss look like a male stripper to you or is it just me?

Last week’s altercation between Corbin and McIntyre after his switch-a-rue match, he takes Drew’s sword he named “Angela” after his late mother and makes a mockery of it with a joke. What does McIntyre and his mother have in common? Answer: “He lost them both.”

Because of this uncalled for and insulting comment, McIntyre appears and proceeds to destroy the Happy Talk stage. I saw that Corbin lost his hat during this surprise, and I wished that Drew would grab it and flaunt it.

Corbin had to pay for his unwelcoming presence.

And that’s it. See you at WrestleMania!