2022 WWE Hall of Fame Ceremony full of laughter and tears 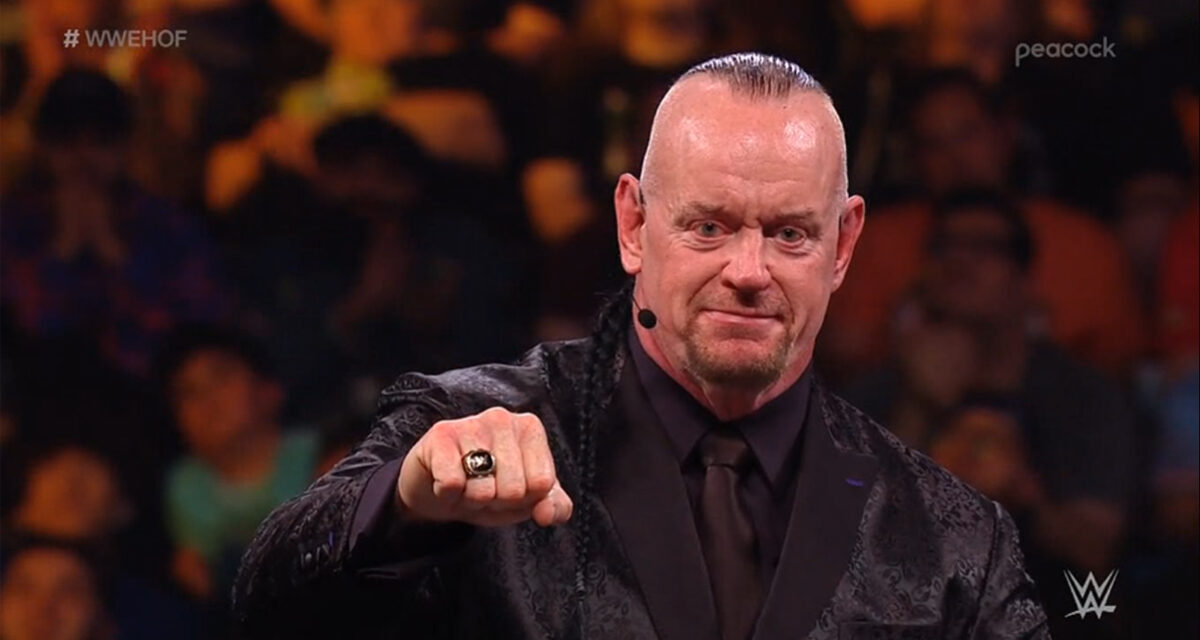 The Undertaker is now immortal. Mark Calaway, known by wrestling fans as The Undertaker was inducted into the WWE Hall of Fame Friday night. Although it is his persona, his character who fans know him by, it was Mark Calaway who greeted fans for an hour-long acceptance speech which had everyone listening in awe.

“Tonight, I am going to take you behind the curtain and meet the man under the black hat: Mark Calaway. Now, it could be really easy to keep Mark Calaway hidden until the day that I died but I wanted to show every one of you the same respect that you have shown me for so many years,” he said after a thunderous ovation which made even The Undertaker’s eyes tear up, his chin twitch and chest heave as he held back the tears at the start of what would be a very emotional journey for The Deadman.

Dressed in a snazzy black suit and wearing a wireless headset and microphone, Calaway at times was a storyteller, a performer and astoundingly enough a motivational speaker as he led the crowd at Dallas’ American Airlines Center through his extraordinary career and his life too.

He spoke about his brother convincing him to follow his heart and stop shooting hoops to become a pro wrestler. How Sycho Sid angered his mother so much that she tried to jump the barricade and save her son, The Undertaker, during a match.

“And that’s how mom got banned from wrestling,” he laughed.

Calaway peppered his speech with “mental moves” he shared with an audience who were already familiar with his physical moves like The Tombstone Piledriver, Old School and The Last Ride. Those “mental moves” were things he learned throughout his life and his career which he hoped would help others.

“Remember: You cannot live your life for anyone but you. When you wake up tomorrow morning I dare you to make these mental moves part of your life too. Perception is reality. Respect and loyalty go a long way and no matter what, never be content,” said Calaway summing up his words of wisdom later on. 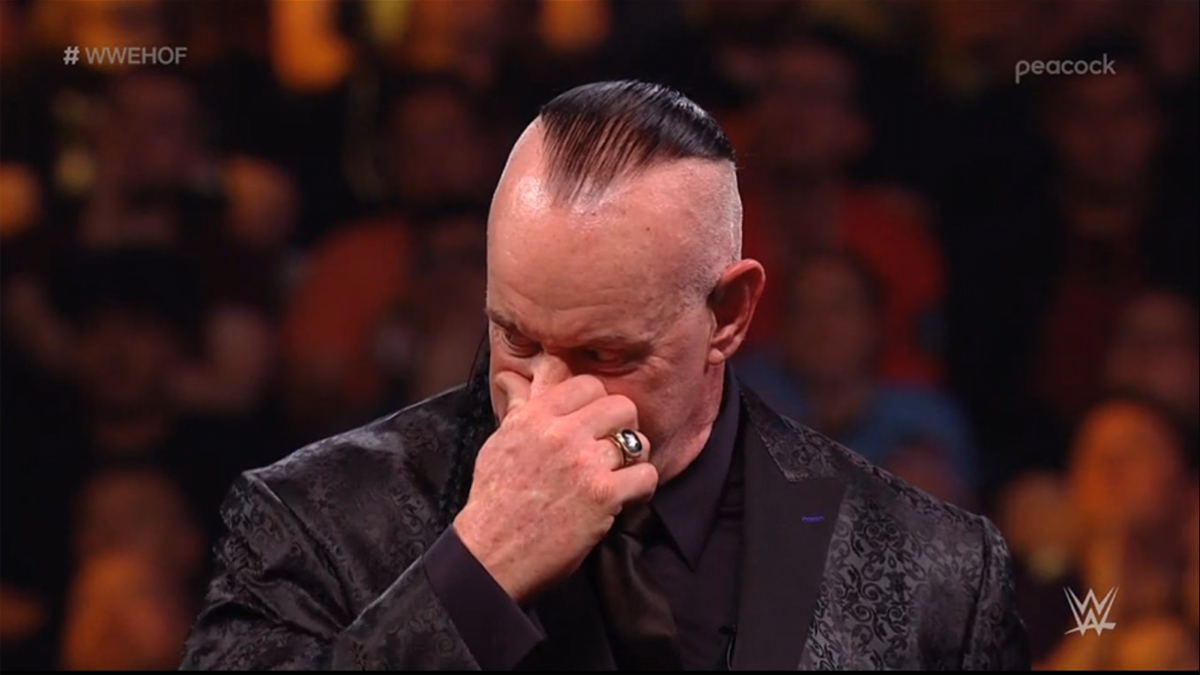 The Undertaker is brought to tears. Courtesy: WWE Network. MORE PHOTOS IN OUR WWE HALL OF FAME CLASS OF 2022 GALLERY

Calaway paid tribute to his close friends in the business, the Bone Street Krew, including Bryan “Crush” Adams who passed away in 2007 at just 43 years old. He called him “another brother who was taken way too soon,” and then had to take an audible pause before carrying on as he cleared his throat. Calaway told a story of how Adams convinced him to fly all the way down to Florida so they could practice breaking bricks with their bare hands, just to say they could break bricks with their bare hands. It was the last time he would see his friend.

“I never understood why I said yes to breaking bricks but in this moment it all makes sense,” he said.

He thanked Paul Bearer for being so crucial to The Undertaker’s success and also make him laugh with all of his ribs and pranks. 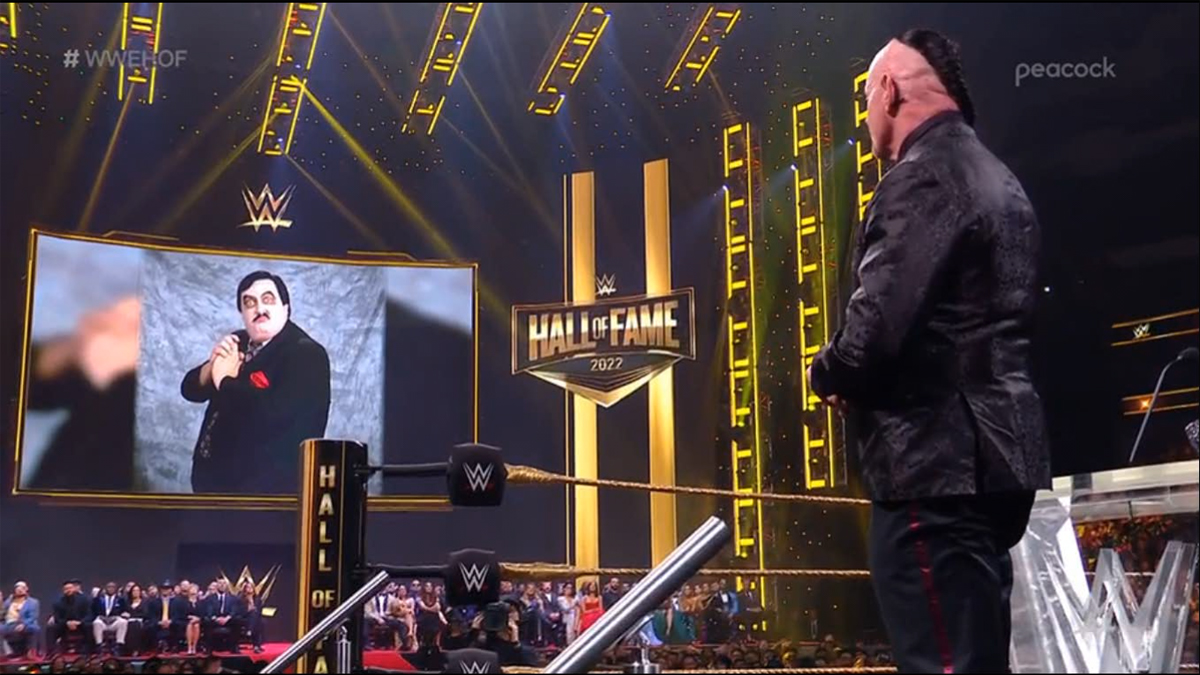 “I mean, who does that? Who puts cucumbers in a man’s drink? An evil man, that’s who,” said Calaway as he laughed and pointed to a picture of his long-time friend and manager.

Calaway went on to thank Kane, Stephanie McMahon, Shawn Michaels, Triple H and Shane McMahon, who curiously enough was not in attendance.

Calaway left Vince McMahon for last saying that he became his father figure when his own father passed away. He called being given the opportunity to play The Undertaker the “chance of a lifetime.”

“No matter if it was a pat on the back, a hug or a swift kick in the ass you always seemed to know what I needed,” said Calaway of his mentor, boss and friend.

Perhaps even more poignant than Mark Calaway revealing his true self to fans though was this year’s Warrior Award recipient: Shad Gaspard. Shad’s wife Siliana and his son Aryeh accepted the award for Gaspard who died saving his son from drowning in 2020. 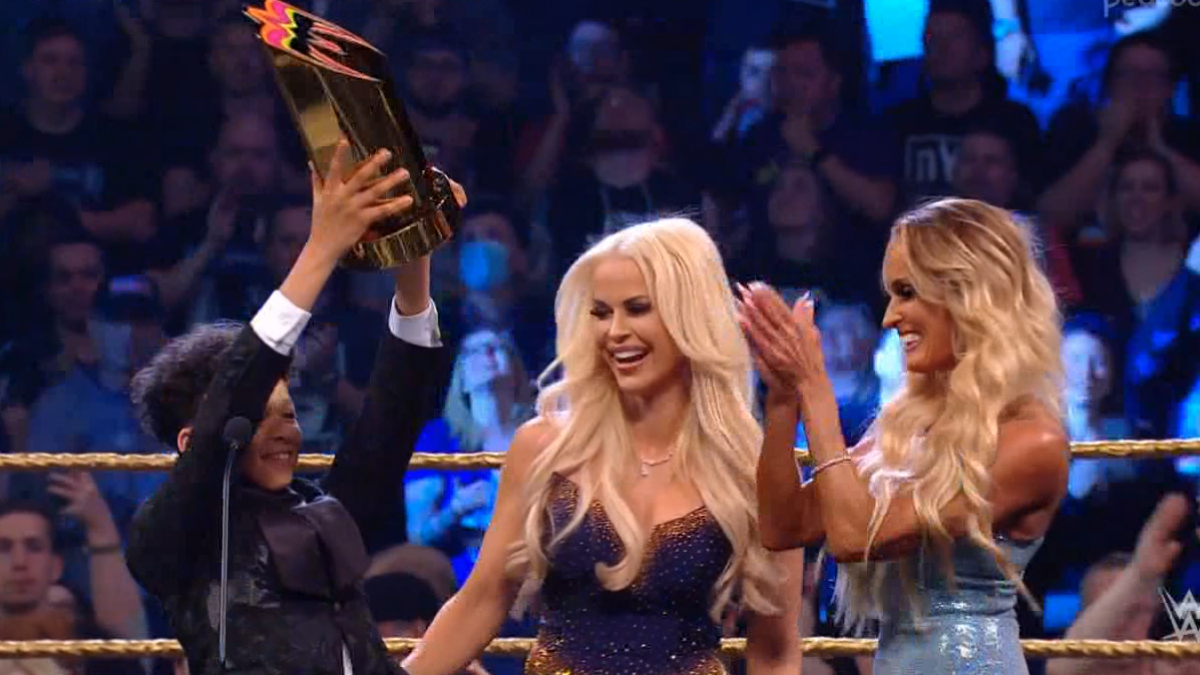 “The best of daddy lives in you and you come from a great man,” said Siliana to a solemn but smiling Aryeh who held the Warrior Award trophy up high to honor his father who made the ultimate sacrifice any parent can make for their child.

Rick and Scott, The Steiner Brothers, were inducted by Rick’s son NXT superstar Bron Breakker. Breakker joked about being reluctant to turn over the live microphone to his sometimes unpredictable uncle, Scott. 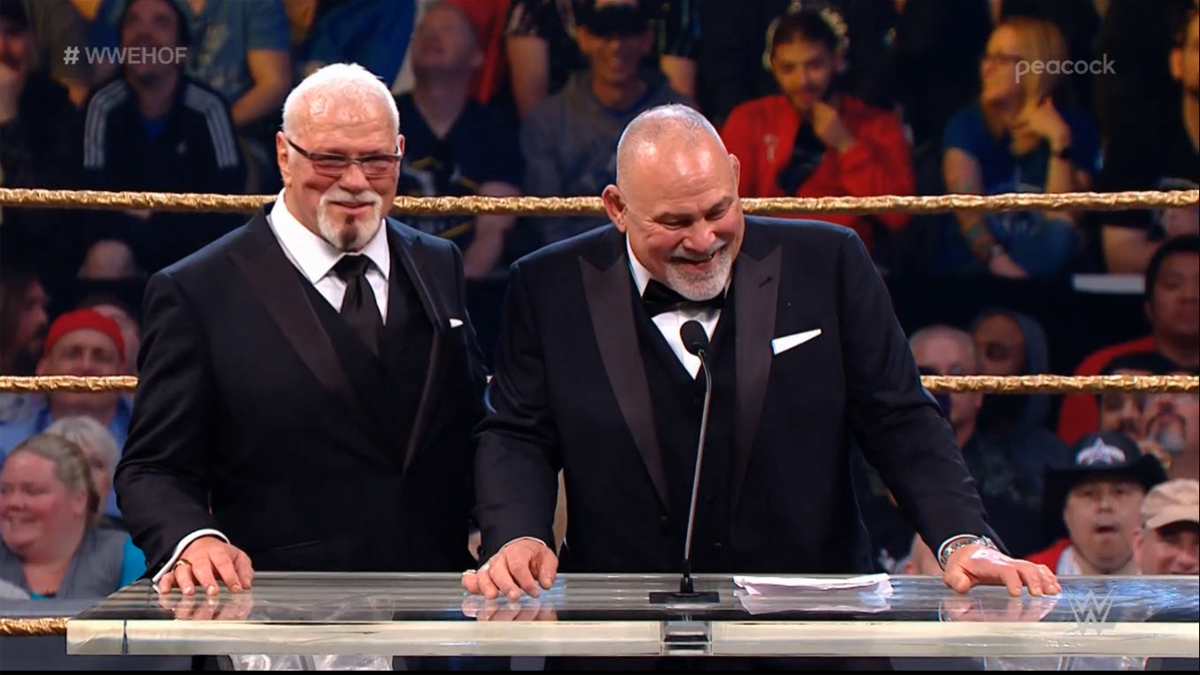 Scott and Rick, The Steiner Brothers. Courtesy: WWE Network. MORE PHOTOS IN OUR WWE HALL OF FAME CLASS OF 2022 GALLERY

Rick thanked his brother for always being there for him in and outside the ring.

“Most of all, one person I want to thank is my brother. Like he said, he always set the standard high and kept me on the pace to be the best I could be. You get to do something you love in your life and it is icing on the cake when you can do it with your brother,” said Rick to Scott. 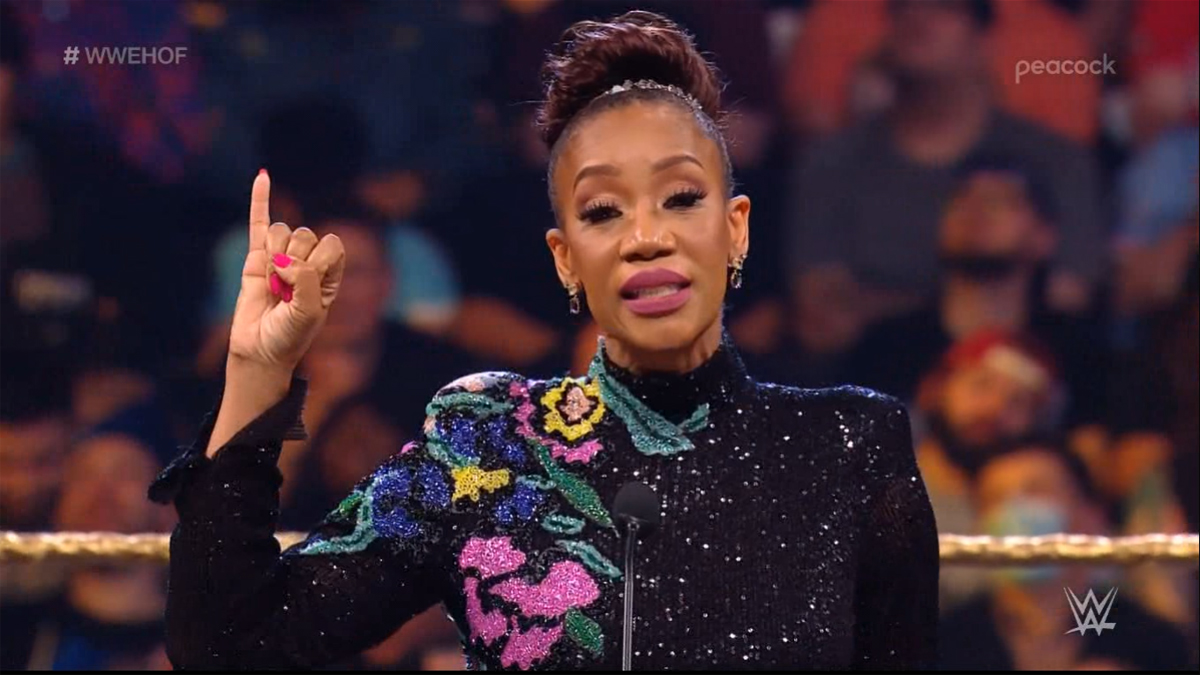 Queen Sharmell (Sharmell Sullivan-Huffman) accepted her Hall of Fame induction by her husband Booker T by calling her journey a real-life fairy tale come true. Sharmell began as a Nitro Girl before becoming a manager in WCW and WWE. 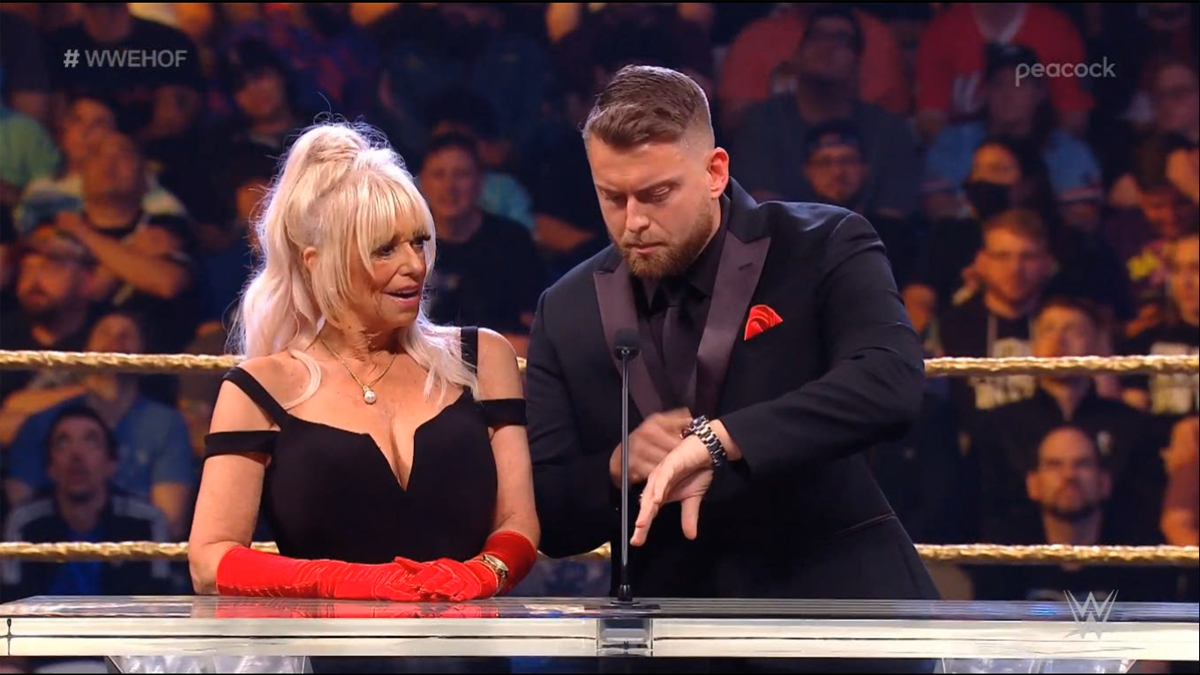 “Mom, my watch isn’t working is yours?” asked Jesse.

“Could you all help us with the time?” said Jesse to the crowd as they started chanting: It’s Vader time!

Jesse underscored what his father meant to him growing up.