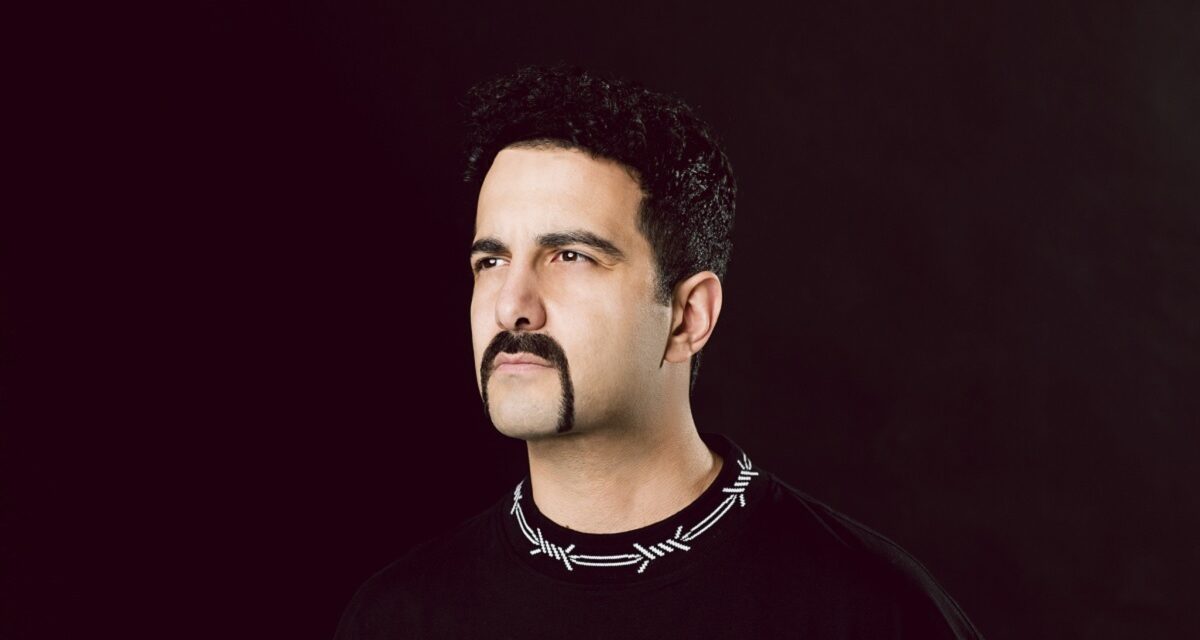 AT&T stadium, the venue for this weekend’s WrestleMania 38, can hold upwards of 100,000 seats. But if DJ Valentino Khan has his way, nobody will be sitting down in them. That is, at least when he’s behind his DJ kit, spinning the tunes and rocking the beats as the pre-show entertainment on both nights of the event.

Playing on such a grand – or “stupendous” to use WWE’s description – stage is yet another feather in the cap of Khan, who has also wowed giant crowds with performances at EDC Las Vegas, Lollapalooza, and the Ultra Music Festival.

As the first ever DJ to perform at WrestleMania in this capacity, Khan is looking forward to bringing something new for the fans.

“The thought process was that I can help deliver that energy before the matches start, rather than having this lull of silence in the arena,” he explained to SlamWrestling.net, in an exclusive interview. “I think it helps set the tone for the overall experience.”

The road to WrestleMania has been a whirlwind for Khan, who discovered his love for dance music as a kid when hearing his brother play music in his bedroom. He started putting out music from his Los Angeles home, developing a fan base, which blew up in 2014 when he dropped his debut EP, “In Khan We Trust.” From there, his popularity grew thanks to tracks like “Deep Down Low”, “Pump” which hit over 40 million streams on Spotify, and the viral Tik-Tok anthem “Better.”

His surging popularity earned him the attention of WWE, which asked him to perform at last year’s SummerSlam event in Las Vegas.

“When they reached out, I was pretty shocked,” he said. “But everything felt on brand. I’ve been a fan since the Attitude Era so I understood the world I was jumping into.  We discussed me mashing up and incorporating some WWE themes into my set and I took it as a fun challenge to integrate it all. Thankfully, everything went well.”

The positive response from the fans and everyone backstage eventually led to the announcement earlier this month that about his WrestleMania spot, though the actual deal was in place some time ago.

“I’ve been looking forward to (it) for months. It was hard not telling anyone until we got the chance to properly announce it,” he revealed.

As a wrestling fan, Khan knows and respects the audience for whom he’ll be performing, and he says he’ll be sure that his set reflects that.

“So I look at it as a fun challenge in terms of playing stuff I like while giving the crowd an experience they’ll enjoy. That’s also part of what makes incorporating wrestling themes into my set so fun.” 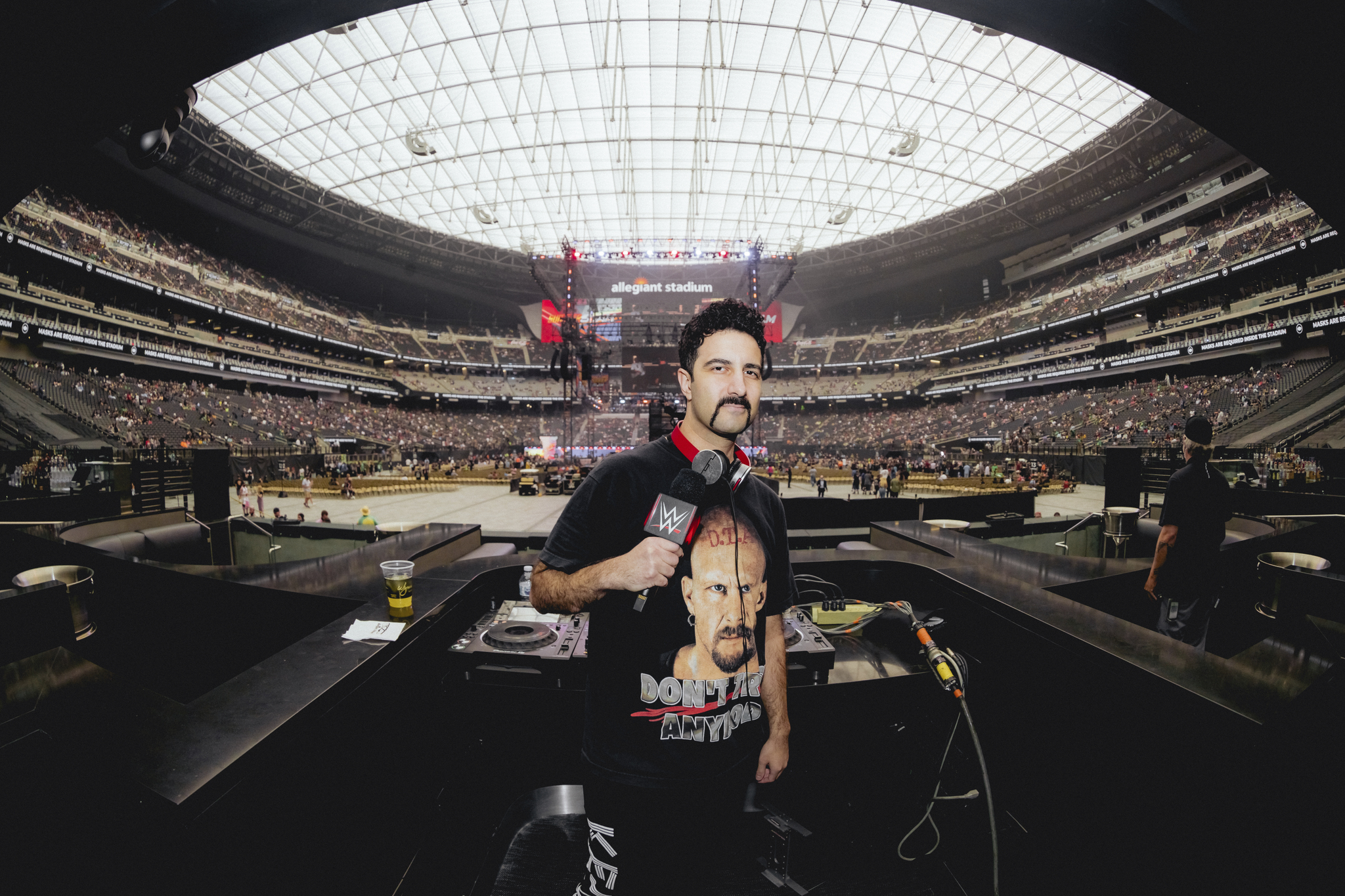 He points to a key moment during his SummerSlam set that shows how the formula can work to perfection.

“Last time, it was dope to have this crescendo of energy where everyone was singing along to Vince (McMahon’s) theme ‘No Chance in Hell’ by the end of the set. The most rewarding experiences in my touring career have come when I’m tasked with riling up the crowd. I think if you stay sure-footed in your approach, you’ll end up with those cool moments.”

In terms of cool moments he enjoyed as a wrestling fan, Khan listed off a few of his favorites – both because of their performances, but also the vibe they brought to the product.

“Stone Cold Steve Austin was always my guy,” he said. “I think I gravitated toward how rebellious he was and how he’d flip the middle finger to anyone in sight. Triple H was so good with his heel work that I grew to appreciate him for being the best at filling that role.  I was also into a lot of the dudes that came from ECW like RVD, Raven, Tazz and Rhyno. It brought a newer underground, hardcore energy to the WWE at the time.”

While some of those themes are likely to be incorporated into his set, Khan also considered this reporter’s request for a remix of a more classic ’80s theme, the Big Boss Man’s “Hard Time” song.

“That one is a great one to flip! Let me see what I can do,” he teased. “That was a big point of emphasis with the initial discussions I had with WWE, incorporating (wrestlers’ themes) in a creative way. Because that helps me connect with the audience and crank up the energy in the arena.”

One thing that Khan isn’t looking for, at least for now, is an in-ring “WrestleMania moment” like fellow musician Bad Bunny had last year.

“I wouldn’t ever do anything like that unless I properly trained like Bunny did,” he said. “He respected the craft, and I think that’s why he (got) over with the fans. That being said, never say never.”

He also wouldn’t want to risk getting hurt in the ring, since that would undoubtedly affect his current touring schedule. Khan is actually taking the two Mania gigs in the middle of a multi-city North American tour in support of his latest EP, “pkg” which dropped last week and features collaborations with rapper Lil John among others. The tour started last week and dates have been announced through July, with stops in New York, Boston, Vancouver BC, Honolulu, and Toronto’s Veld Music Festival.

But he couldn’t pass up the opportunity to not only perform at WrestleMania, but also watch the matches in person.

“I’m looking forward to Brock [Lesnar] and Roman [Reigns],” he said. “The build-up to it with Heyman’s double-crosses and Brock’s cowboy persona have been on the money. I think Edge and AJ [Styles] is going to tear the house down – their in-ring work is always great. And I have a feeling the yet-to-be announced Seth Rollins match might end up being one of those great WrestleMania moments.”

Though it’s safe to say that even if those matches don’t receive standing ovations, at least at some point, Khan will have the crowd on their feet, pumped up, hyped, and ready for WrestleMania.