Monday Night Raw: A returning Lashley and a haircut for Lynch top the night 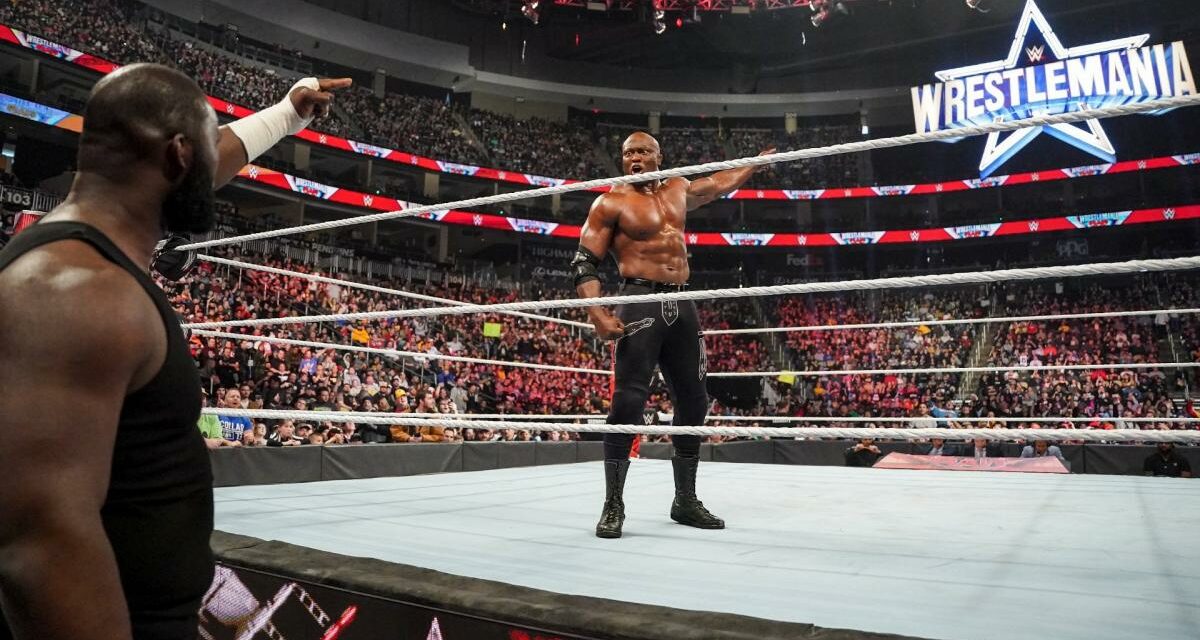 We are in Pittsburgh, PA, with a crowded four man announcer’s booth of Michael Cole, Jimmy Smith, Byron Saxton, and Corey Graves who drew the short straw and is sitting at the left corner of the table, trying to look like he belongs.

Here are the first words from Cole: “Isn’t it comforting when I’m here at ringside with you guys?” I’ll present that without my own commentary.

Brock Lesnar is out first, and he’s in a good mood as he’s laughing and bantering with the crowd. He vows to take a trip down memory lane with Reigns at WrestleMania, down the streets of Suplex City, introduce him to the Beast of Broadway, and then go to the carnival for a ride on the F5.

Following up after Lesnar is The Miz and … Lucha Logan. Yes, that would be Logan Paul wearing the mask of Rey Mysterio that The Miz swiped off his head last week. Before they get to talk too much smack, Rey and Dominik march to the ring for the booked match between The Miz and Rey, but Dominik immediately jumps Miz and takes him down.

As Paul simply stays away from Rey, the ref ejects Dominik from ringside for the contest.

Moments into the match, Mysterio dumps Miz with a hurricanrana before narrowly missing Paul with a baseball slide. When Rey chases the YouTuber around the ring, Miz grabs Rey and drives him into the barricade as Logan has a laugh.

Coming back from ads, Mysterio kicks Miz away while perched on the top rope before launching himself off and hitting a seated senton. When Rey goes to follow up, Miz tries for a powerbomb, which Mysterio slides out of and pins Miz’s shoulders down for three.

As soon as the bell has rung, Dominik rushes down the ramp and throws Paul into the ring where he lands on the ropes in a 619-ready position. As father and son attempt a double attack, Paul rolls to the floor — but at least Dominik manages to grab his father’s mask back.

The Miz is altogether worse off, suffering a superkick, a double 619, a top rope splash from Dominik, and a second splash from Rey. 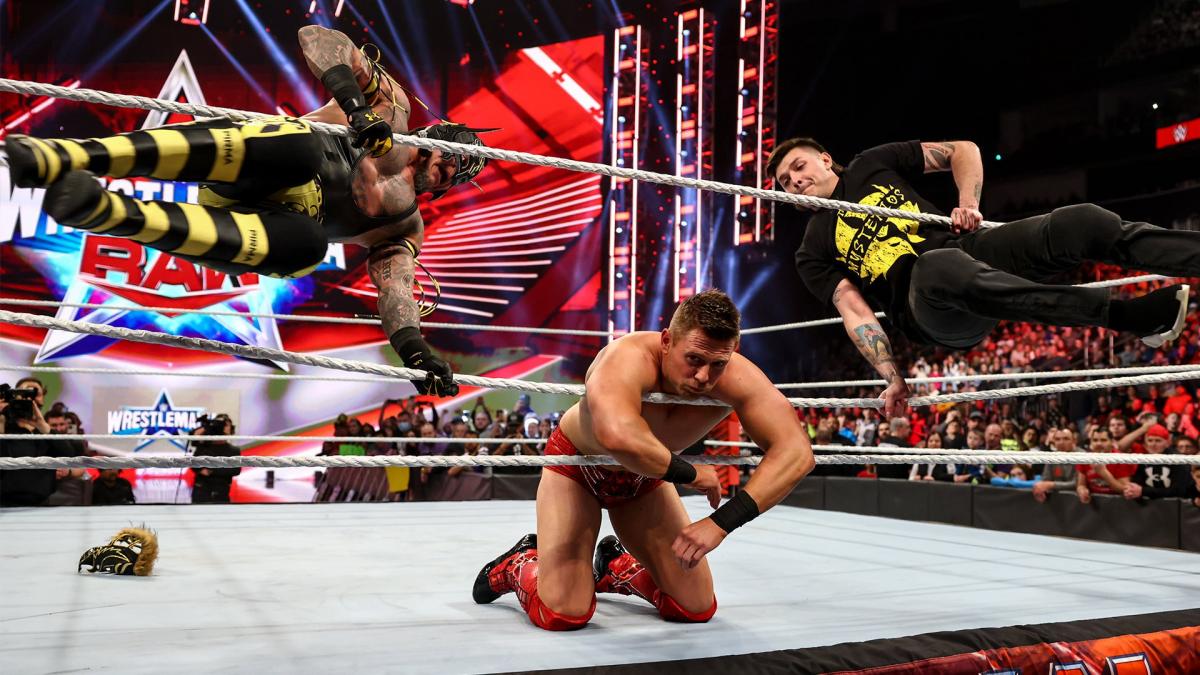 Have you ever seen someone look so bored at being hit with 619s? Photo: WWE

In a pre-taped segment showing 6:57 in the morning, Rollins is in his fancy duds at WWE Headquarters for an early meeting with Vince McMahon. By 9:05 he’s finally told he can enter the office. Rollins is eager to hurry up and hear what the consequences of his latest actions are: fining, suspension, or firing. Instead, Vince says that if he’d wanted to be in WrestleMania, why didn’t he just ask him?

Vince drops it bluntly: Seth Rollins is going to WrestleMania, but Rollins will only know who his opponent is once the match is happening.

Erik starts in the ring and takes a hard clothesline before rolling out to the floor. The ref starts laying the count and Ivar goes to check on his partner as the count of ten makes this a count-out victory.

Ivar tries to avenge his partner, but one kick sends him to the floor as well. Kevin Patrick joins Omos in the ring, asking if there’s anyone that Omos is afraid of. Omos says no, but as Patrick continues Bobby Lashley’s so-cool entrance announces his return.

Lashley gets a nice pop coming back after being unceremoniously written out of the Elimination Chamber match in Saudi Arabia last month. Lashley stands toe-to-toe with Omos and is about to point at the WrestleMania sign when the big(ger) man shoves him away. Lashley ducks a clothesline and runs hard into Omos, knocking him and himself off his feet.

They both point at the sign and I guess the match is made.

After a commercial break, Reginald says he’s been trying to find the right moment to ask Dana Brooke something, and gets down on a knee to propose to her. She accepts, but their happy moment is interrupted by Tamina trying to steal the 24/7 title. Reggie throws Tamina off of her and they scram. Akira Tozawa slides in and also proposes makes a proposal, to which Tamina also says yes.

Meanwhile, from just a few feet away, R-Truth watches the whole exchange with binoculars and a ref by his side, saying he has an idea.

Now it’s time for the visiting Roman Reigns, with The Usos and Paul Heyman in tow, to have his say. He ignores the “What?” chant for a few rounds before threatening to smash everyone saying it if they keep it up. Guess what – it gets louder. Reigns says that the only thing he hasn’t done is beat Lesnar at WrestleMania, which pisses him off.

Reigns is playing it angry and is kind of rambling, essentially promising to complete his personal journey by beating Lesnar.

Backstage, Queen Zelina and Carmella are doing a photo shoot when Baszler and Natalya let them know they haven’t forgotten their cheap shot attack from last week.

Morgan and Ripley start off tagging in off one another and keeping Natalya down, but as Ripley reaches to Morgan for another tag Naomi slaps herself in. Quick tags sees Vega taking a double kick from Banks and Naomi, with Banks attempting a pin and Carmella breaking it up, kind of. It was a generously slow count by the ref. This leads to everyone running in like movie ninjas and taking their turns doing big moves going into a break.

Back from ads, I’m actually surprised at how long this match has been going. Banks hits a Backstabber on Carmella but can’t make her way for a tag. Baszler tags in and sets up a Hart Attack with Natalya. Vega, though, throws Natalya out of the ring and attempts a pin – which Baszler breaks up. Banks tags out and all the faces take turns beating on Vega before a Riptide seals the deal.

After a break and a Steve Austin retrospective video, Kevin Owens is in the ring explaining how he was paying tribute to Austin last week when he impersonated him – not mocking him. Hmm … Owens is doing his customary t-shirt bit with KO-Mania VI, picturing him and Austin with a tagline of Stunner vs. Stunner. That doesn’t sound like a talk show.

Owens insists that Stone Cold is not going to be at WrestleMania – “Steve” is. Stone Cold was great, but he’s gone and is never coming back. Owens further cements his heel legacy by announcing that he hates beer, but he promises that he’ll share one with Steve at WrestleMania and toast the passing of the torch from Austin to himself as the true master of the stunner.

He finishes with one friendly warning — if Steve tries to get funny with him, there will be a stunner and a beer bath awaiting him.

As Smith touts the power advantage of Theory (?), Austin does indeed begin by throwing Ricochet over his head, but Ricochet bounces back by flying around the ring, delivering a springboard elbow and standing shooting star press.

With Theory down, Ricochet ascends the ropes and readies his senton splash, but Austin runs into the ropes and crotches the one and only on the top turnbuckle. He follows that with an ATL for the decisive victory.

Praises and well wishes roll across the screen for Triple H after he had announced his retirement last Friday. Now, if I could just turn off my wrestling brain and stop thinking that this is all a work…

In the ring, Bianca Belair confirms that she’s ready to go for WrestleMania and that she’s had enough of Becky Lynch. As Lynch’s entrance music interrupts her, Belair is ready for Lynch’s attempt at an attack from behind, stopping her on her way into the ring. Lynch finds herself an opening, though, and decks Belair with a chair before pulling out a big pair of scissors.

Lynch is poised to cut off Belair’s braid, but the challenger instead hoists her up for a KOD – and then another. Belair grabs the scissors herself and cuts off big chunks of Lynch’s locks as Adam Pearce, Sonya Deville, and a few security jobbers finally convince her to stop. Lynch comes to and sees the hair all around her and shrieks – so I guess we’ll see a new hairdo on Saturday. 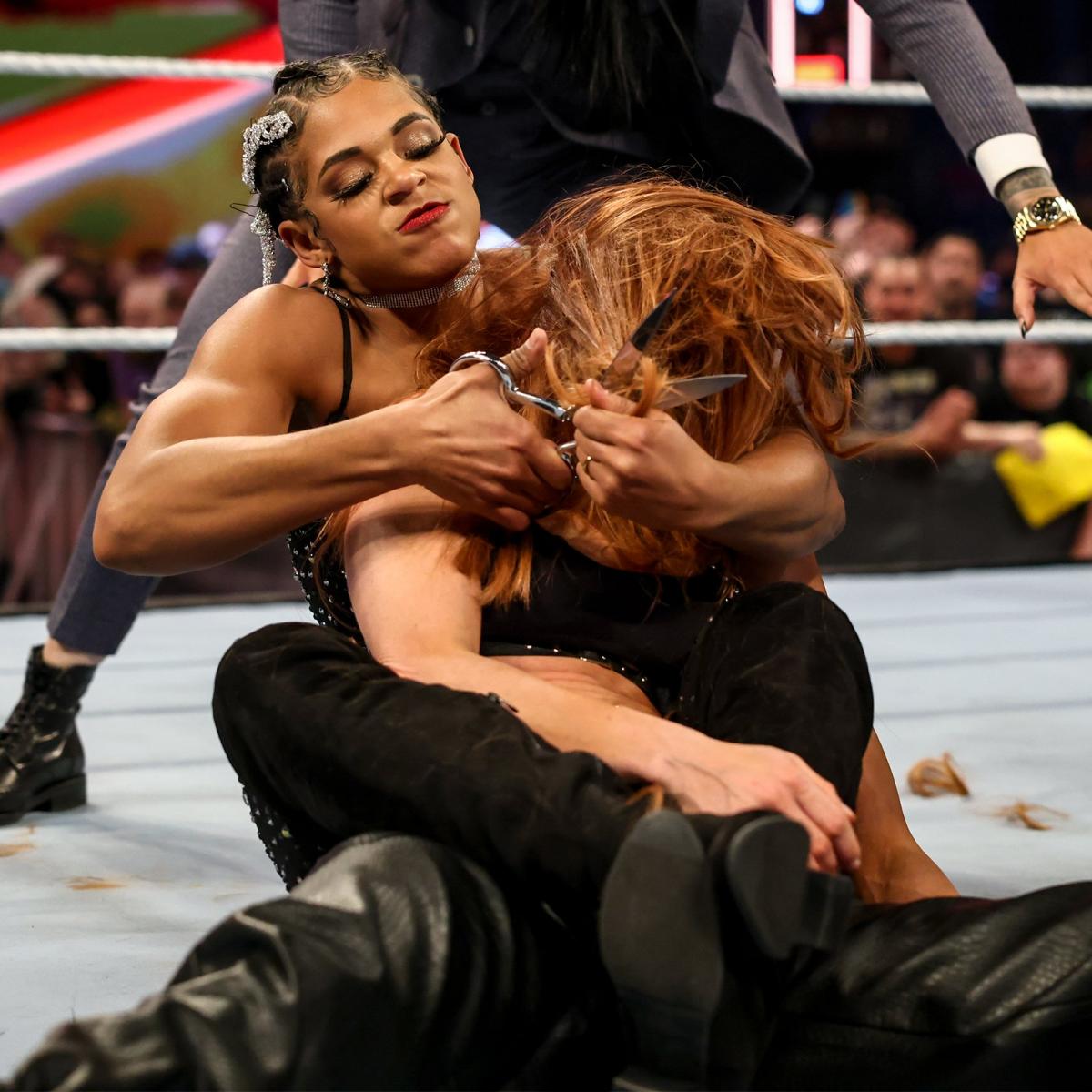 She’s no Brutus Beefcake, but Belair gets some good cuts in. Photo: WWE

Corbin is in the ring first and locks up with McIntyre, only to quickly tag out. McIntyre muscles Moss around with an overhead toss and dumping him in Corbin’s corner, begging him to tag in. Instead, Corbin steps off the apron and heads up the ramp. That leaves Moss alone to receive a Glasgow Kiss and Claymore and a quick win.

Corbin immediately attacks, running McIntyre into the corners, delivering an End of Days, and leaving once again with the Scot’s sword.

Shinsuke Nakamura & Rick Boogs sit by the commentary team, with Graves loudly complaining that he’s being squeezed out even more. Moments into the match, both Usos get into the ring and try a tandem superkick, but RK-Bro blocks and tries a double RKO. The brothers go to the floor and Orton drops Jimmy onto the table (not “through” it as Smith yells out), and Riddle drops Jey to follow.

When we come back from a break, Orton is down in the ring, but he clotheslines his way back into the fight, tagging in Riddle who delivers a kick to the chest. Jey gets in and drops Riddle with a Samoan Drop, and Jimmy knocks him down with a punch from the apron.

This is the part of the RK-Bro match where Riddle takes a lot of punishment before hot tagging Orton. A low kick from Jey sends Riddle to the floor, and Jimmy throws him over the barricade before anther break. Coming back, Jey is focused on doing an “Uso” chant with the crowd when Riddle levels him with a kick and makes the tag. Orton is in and has an unlimited number of signatures stored up. A scoop slam, a hangman’s DDT, and what was surely about to be a DDT is next – except for the interfering Street Profits. Angelo Dawkins and Montez Ford take it to both teams before Nakamura and Boogs join in.

It’s an all-out scrap that ends with, guess what, an RKO for Ford. Actually, there are two for Ford and one for Dawkins — that last one from Riddle.

There was something comforting about tonight’s episode of Raw; it felt like an old-school Superstars of Wrestling show before a big pay-per-view. Not much new happened, but it pushed a whole bunch of stories just that little bit closer to WrestleMania.