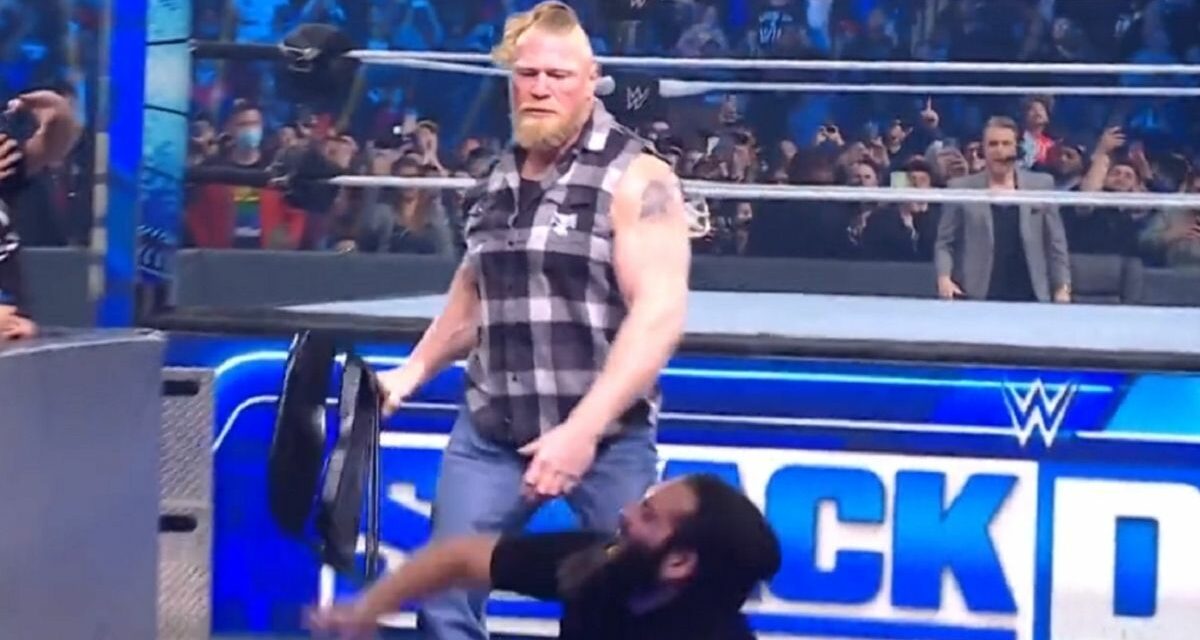 Kayla Braxton asks Lesnar if he had the time to think about what happened last week with the forklift attack and the car door ripping. Tonight, Lesnar is waiting for Reigns to show up and deliberately asking for a reason to be provoked.

During WrestleMania, The Usos put their Tag Team Championships on the line against Nakamura and Rick Boogs.

The fight between these two men went sideways quickly once the Uso brothers entered the ring leaving Nakamura and Boogs to trample them.

Nakamura kicks Jimmy in the head causing his hat to fall off and Boogs uses Jey as a human weightlifter. Once order was placed, Jimmy and Nakamura were finally brawling.

Nakamura misses his chance with his powerful kick as Jimmy retreats in the corner of the turnbuckles. Nakamura chocks Jimmy having him leave the ring before Shinsuke punches the back of Jim’s head.

Jimmy places Shinsuke in a chockhold. Later, Nakamura finds himself outside the ring holding the top rope as Jimmy rushes to kick him in the groin and fails to. Jimmy surprises us with a spin kick to Nakamura’s jaw after having his foot caught.

Jimmy prepares himself to jump Shinsuke through the ropes and gets kicked in the face by Nakamura, whose on the edge of the ring.

Nakamura resumes to kick Jimmy in the chest repeatedly for a failed win.

Jey knocks Boogs onto the floor near the announcement table causing Nakamura to get distracted to provide Jimmy a win with a super kick. Yet, it backfired, wrestling fans. Boogs wakes up, grabs Jey and hits him against the ring poll as an aggressive thud echos throughout the scene.

Nakamura charges towards Jimmy and takes him down with one of his destroyer kicks for the win.

Since the Usos have been the Tag Team Champions 249 days, they were ecstatic to have someone challenge them.

Brock Lesnar is still waiting for Roman Reigns to appear. He cracks open some champagne while eating some grapes, yet spits the alcohol out it quickly because it “tasted like poop” as Michael Cole described. I wouldn’t say poop, I think alcohol is more like the Devil’s drink.

The Undertaker will be inducted into the Hall of Fame right after WrestleMania by Vince McMahon.

Kayla Braxton had a talk with Drew McIntyre about his upcoming match against Nappy… I mean Happy Corbin. McIntyre can beat Corbin’s ass anytime, but he chooses to wait for WrestleMania to get the most eyes to witness the war between McIntyre and Corbin.

Clips of Corbin’s collapsed life was revealed when he lost his wife, investments and friends. He did manage to get back on top, and comes in strong with his friendship with Madcap Moss. Moss goes in for another joke to name the title for Corbin’s new movie referring to his baldness. It didn’t sit right with Happy. Two misfired jokes in the last seven days from Moss. He really isn’t funny unless he gets his ass beat.

no, Xavier Woods vs. Ridge Holland

Kofi comes in saying that he isn’t the one Holland will be brawling tonight, no, kids, he’s going up against Xavier Woods. A former member of the New Day is back from an old injury.

With all honesty, the match lasted two minutes at most because it happened so fast. Woods absolutely cut Holland’s butt real quick.

He plummeted Holland for the win.

Paul Heyman and Roman Reigns went to have food at a restaurant given they weren’t here yet. Reigns complements the sides they had, really relishing the goods while sitting in the car.

Reigns warns Lesnar that he should already be leaving his dressing room soon before he gets there; otherwise, he will burn Lesnar’s butt. Giving the provocation Lesnar was waiting for.

Michael Cole mentions that Ronda Rousey is looking for revenge after her vicious fight last week which involved a red car backstage and a very painful submission move from Charlotte Flair here tonight.

“Leave your heels and your excuses, and get your Barbie ass out here!” said Rousey. Flair shows her face on the screen knowing that she wasn’t going to show up tonight and smack talks, or tries to, towards Rousey. Ronda has broken her arm many times, but nothing brought her more enlightening joy than when she broke it when she was younger. Rousey isn’t the one to back down.

Braxton arrives into Reigns’ dressing room to find that Lesnar is still there. Lesnar is slowly running out of things to break after throwing a white lamp. I would have gone for the couch too.

Not that kissing cam nonsense from the Los Lotharios again. I hate that.

Ricochet gets on top the turnbuckle awaiting to jump Angel but gets his leg grabbed and dragged causing Rico to hit his head on the buckle.

Rico pushes Angel into the opposite side of the ring and manages to knee kick Angel in the face. As Rico prepares himself to jump Angel from the top rope, Humberto distracts him giving Angel to opportunity to flip Rico over into submission from behind and wins.

Ricochet pretty much said “nah, sir” and demands that Angel gets back into the ring, so they can fight again. Ricochet kicks both Angel and Humberto’s asses.

Rico places Humberto onto the top rope, wraps his legs around his neck and flips his opponent over. He has the power to smack Humberto twice and looking for a win but fails during his second same night match against Humberto.

After Angel pulls Humberto outside the ring, Ricochet jumps from the top rope and lands onto Angel. Rico uses the announcement table to flip Humberto over after Angel disappears under the ring where the tables, ladders and chairs are.

As Rico attempts to get back into the ring, his ankle gets caught by Angel and he misses his chance after the time count has passes.

Pat McAfee gets distracted by the cocky Austin Theory boy with a slap, McAfee proceeds to chase Theory around the ring, past the crowd and arrives backstage where Theory locks himself in Vince McMahon’s office like a cockroach.

Triple H’s retirement has been mentioned tonight as a wonderful and competitive man during his employment at WWE.

Queen Zelina exits the ring out of pathetic fear. Sasha takes control and momentum during the begin of this match by unbalancing Ripley, and Shayna as she comes back into the ring.

Naomi tries to take out Shayna but gets jumped by Natalya outside the ring just as Carmella enters the fight as well inside. Women’s Royal Rumble is at it against.

Ripley places Banks into a leg hold leaving Baszler to kick Sasha in the face.

Baszler jumps Zelina outside the ring and holds her there until Ripley comes in and lands on top of Baszler just as Zelina speeds off. The Queen mounts the edge of the ring and sends Ripley into the barricades using her legs.

Zelina enters the fight against Banks who pulls a quick choke hold move which causes Zelina to tap out and awards her the win.

Roman Reigns finally arrives at the stadium, Heyman’s stomach is turned upside down, but Reigns reinsures him they’ll be fine, but Brock won’t be. Ooh, ass whipping .

The knowledge of Lesnar being here is still fresh, but Reigns ain’t afraid to confront him if the time comes. Let’s see how long that takes.

Reigns did this weird face as he said “Acknowledge me” to Brooklyn. Heyman wimps again as the weasel, rat and snake he is, fearing for his life.

Lesnar isn’t found in Reigns’ dressing room anymore, but broken lamps, champagne bottles, plates and more are seen in pieces everywhere. We then find him smashing Reigns’ car with a mining pick axe.

Brock Lesnar shows up through the crowd behind Reigns and Heyman who are unaware until they hear Cole and McAfee shouting Lesnar’s name.

Lesnar proceeds to grab a steel chair and commences to brutality attack the security guards as soon as they arrive to shield Roman while he laughs.  Reigns manages to escape with the help of the Usos leaving Lesnar to unleash his anger onto the already beaten guards crawling on the floor. Hilarious.

Backstage, Roman delivers a massage to Lesnar via big screen about how he will destroy Brock’s ass when the time comes and that’s at WrestleMania.