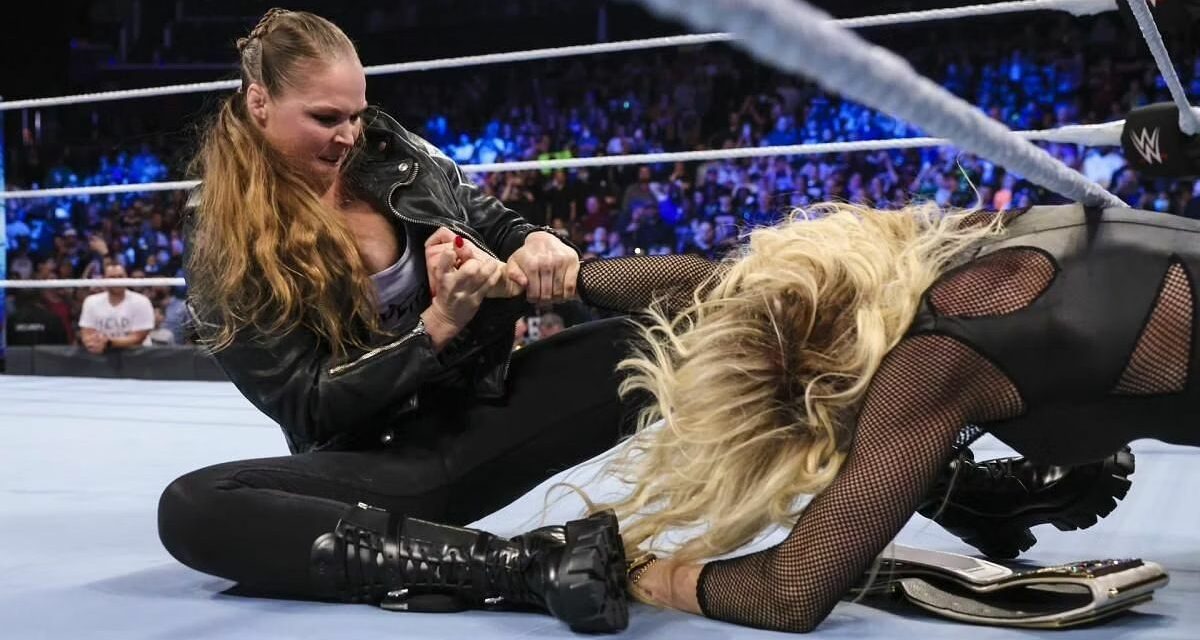 The show is dedicated to the memory of Scott Hall.

We are two weeks from WrestleMania, brawling fans! Who is ready? Tonight’s event is being broadcast from Charlotte, North Carolina. Charlotte Flair’s hometown. As if we need more egotism.

WWE plays the footage of Brock Lesnar’s attack. The security guards were, as usual, getting their asses beat during Lesnar’s pursuit of Heyman backstage after Roman failed to show up last week.

Reigns basks in the presence of the audience. Heyman is still acting like a weasel as Reigns asks North Carolina to acknowledge him.

Apparently, Brock can’t show up tonight due to the weather in Saskatchewan? Reigns says that Brock is scared of him. Heyman interrupts Roman and shows him his phone. Whoops! Lesnar has indeed arrived at the stadium! Fearing for their very lives, the Usos, Roman and Heyman scurry from the ring.

Backstage, Lesnar drives in with a massive forklift-like vehicle and plunges it into Reigns’ car. No one was hurt, thankfully. Lesnar continues to flip the car over and over. He sure is enjoying himself. The Bloodline and Heyman rush over to another awaiting car. Lesnar rips a door off the fleeing car as Reigns and the Usos drive off after narrowly escaping their last ride.

Lesnar gets mad at first for not being able to catch them but then smiles devilishly. He did manage to rip an entire car door off. Props to him. Lesnar proves he is an icon in and out of the ring.

After that rage display, the real brawling can commence.

There was a kissing cam performed by Los Lotharios with their fans as they made their entrance. Meh…

Alberto and Angel threw Shinsuke into the air and Alberto kicked him. They perform a double kick onto Nakamura’s back causing him to scream in pain.

They kept Shinsuke in their corner so he was unable to tag Boogs. Angel removes his pants to reveal his flaming underwear, just a quick note.

Boogs manages to get tagged in and takes Lotharios out by powering himself up.

After last week’s surprise attack on the Raiders and McIntyre, the real match happens tonight.

Madcap Moss goes on to make a joke by calling Happy Corbin “Nappy Corbin”. I think that sounds about right. What do you think?

In the ring, Shanky takes Erik down so swiftly. Erik gains momentum and takes Shanky out with Ivar’s help until Corbin comes in and slams Ivar.

Corbin slaps McIntyre and he enters only to be stopped by the referee. Happy weakens Ivar by tagging Tinder… oops, again, Jinder into the ring. Let’s be honest, during this match Corbin rarely did much but retreat to his corner on ‘Get a Grip’ island.

Erik gets pushed off the ring. Mahal tries to attack McIntyre and gets b*tch slapped.

McIntyre gets in to fight Corbin only for Happy to tag Shanky. I continued for most of this fight ask myself what was Happy wearing? It felt like he forgot that his nice outfit might get dirty in a wrestling ring.

Sami Zayn wants to bring Johnny Knoxville into his world. Sami challenges him to a Anything Goes Match at WrestleMania Sunday. Knoxville graciously accepts then he goes on to mention that he fought a bull once. He takes the challenge as an easy moment since he knows he’ll destroy Zayn. We are in for a wild treat. Or trick. Whichever one comes first. Has anyone given that phone number prank a try?

It is ‘Liv for Brutality’! Morgan and Ripley’s entrance song is amazing!

So, now it’s time for Queen Zelina and Carmella to get their heads in the game. Watching tonight’s event at ringside they had to in order to keep themselves glittering instead of becoming just straight up plain.

Liv tries for a submission only to fail. Banks brings Liv to Naomi. She places her legs on Liv’s shoulders, shaking her ass in her face and throws her off backwards.

Ripley takes Naomi out and manages through Banks’ moves well. Liv helps once she gets tagged. Ripley slingshots Liv into Banks.

Ripley launches herself at Naomi and Sasha bulldozing them into the ground.

Naomi gets on the second rope and kicks Ripley in the face which echoes a loud thud. Ripley’s face was in pure shock. I found that amusing.

Naomi and Banks splash Ripley one after the other and prepare for a win.

Suddenly, Natalya and Shayna Baszler attack all four women. Carmella and Queen Zelina jump them too. For a moment I thought I was watching the women’s Royal Rumble. All that was missing were Ronda Rousey, Bianca Belair and Becky Lynch.

Sonya Deville congratulates Natalya and Shayna on their ambush backstage. She decides to add them to the Women’s Tag Team Championship match at WrestleMania.

Well, technically, Nattie and Shayna did get what they want.

Pat McAfee gets called to Vince McMahon’s office. Ooh, someone is in trouble! Maybe McAfee will be fired for beating the heck out of Austin Theory last week?

When McAfee arrives back in the ring he talks about his life-changing moment when he saw Monday Night Raw when he was a kid. It inspired him.

Theory shows up again. That brash, cocky Theory boy. McAfee hesitates to apologize as McMahon instructed in his office and turns it into a chance to roast him. Theory takes a picture of the gesture.

WWE Off Roads does its final segment for Toyota with Boogs and Nakamura.

Kofi is getting some revenge on Holland for Big E’s neck injury last week.

Kofi came into the match like a badass by taking charge. He does manage to sling Holland on the ring mat and uses the top rope to knock Holland into the announcement table.

Kofi uses his two best moves but they aren’t enough as Butch pushes him off the turnbuckles. I would have used Sheamus’ pimp stick to whack Holland, but that’s just me.

The heat between Rousey and Flair are burning out of control due to last week’s altercation. The sheer brutality and anger during that fight was way more entertaining than I initially thought. That nice car didn’t deserve such abuse though. Rousey didn’t tap out. Which brings us to Charlotte on the microphone in her hometown tonight.

“When you’re Charlotte Flair you always have a plan,” she says.

The crowd chants: “You tapped out!”

Flair says Rousey doesn’t have the love for the sport to become the WWE Smackdown Women’s Champion. Rousey is furious backstage. She is warned by Kayla Braxton that Charlotte is laying a trap. Rousey doesn’t care.

Flair has kendo sticks hidden around the ring. She used one of them to put Rousey into that submission move on the floor but Rousey didn’t tap out; although, she was bleeding from the mouth. Charlotte powerbombs Rousey through the announcement table for good measure. Rousey is now spitting blood too.