AEW Rampage: Swerve Strickland saves Keith Lee; is a team-up on the horizon? 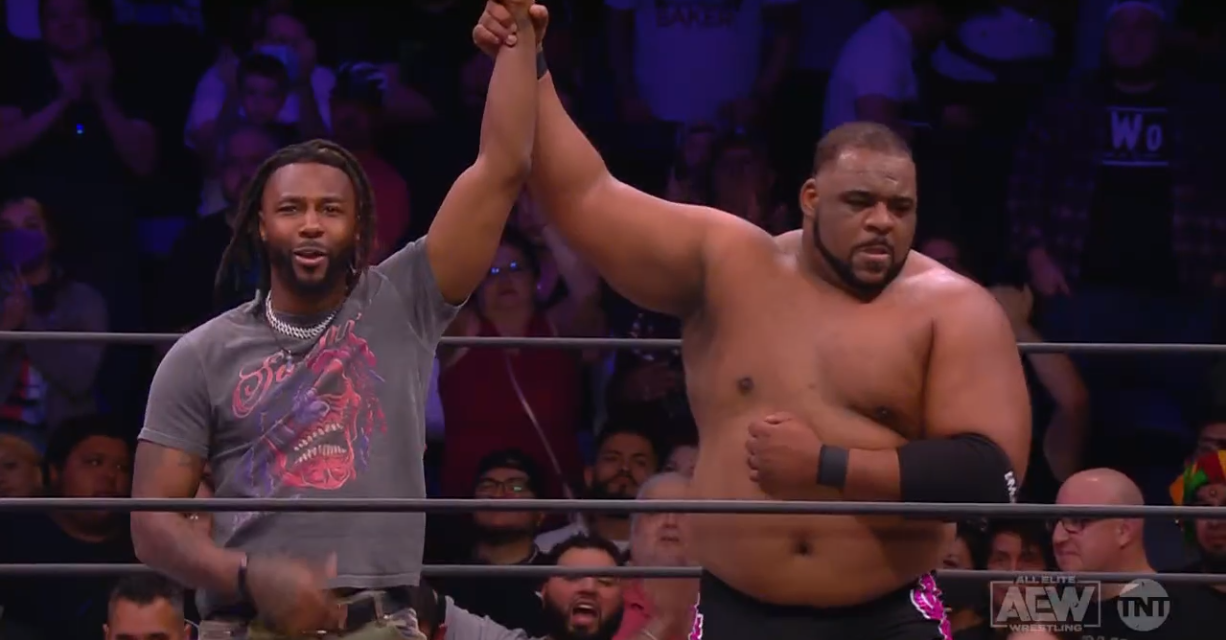 It may be Friday night, but thanks to the NCAA basketball tournament, it’ll be Saturday by the time Rampage ends. Most likely due to the late start time, there aren’t any debuts tonight. Keith Lee in actions is enough reason to stay up late, plus it’s a Friday. What do you have going on that you need get up early. That yardwork can wait. As always, AEW gets right to the action.

Darby Allin w/Sting vs. The Butcher w/The Blade and Bunny

Darby pummels Butcher into the corner with forearm strikes and chops. The Butcher spears Allin into the corner knocks him out of the ring. The Butcher won’t let Darby get back in the ring. Allin rope-a-dopes Butcher and catches him with a suicide dive on the floor. The Butcher catches Allin on the Coffin Drop. He nails a back breaker and gets  a near fall after a slam. Allin bites the hand. The Butcher hits a lariat on the floor that sends Darby head over heels. Sting gets in Butcher’s face. Back in the ring, Butcher locks in a Texas cloverleaf. Allin tries to escape and Butcher power bombs him and reapplies the hold. Allin falls to the floor and gets slammed into the ring post. Butcher swing Darby into the barricade and then the ring steps. Darby avoids a running knee and Butcher crashes into the ring steps. Allin hits the Red Alert and follows with a Coffin Drop from the top to the floor. Allin beats the count back into the ring, but Butcher cannot. The ref calls for the bell.

Winner via count out: Darby Allin

After the match, Andrade El Idolo walks out on the ramp. He’s the distraction, as Private Party and the Blade attack Allin and Sting in the ring. The Hardys pay back the rescue on Wednesday, running off the Andrade Family Office. Matt Hardy challenges the AFO to meet them in the ring right now. They jump to the apron, but then back off. Hardy proposes that they fight on Wednesday in an 8 man tornado tag match.

Scorpio Sky doesn’t want to hear excuses; excuses are for losers. He is here to make history. Paige VanZant tells us why she is the best.

Hirsch meets Velvet on the ramp, but Red gets the best of her with a suplex. Hirsch is dragged to the ring and the ref calls for the bell. Red with a moonsault but can’t get a three count. Hirsch with strikes in the corner and connects with a kick to the chest. Velvet with a shot to the back of the head and follows with a bulldog. Hirsch counters a spin kick with a throw. Leyla follows with a German suplex and locks in a cross arm breaker.  Red is able to get a toe on the ropes to break the hold. Hirsch pulls out the metal turnbuckle connecter from under the ring. Kris Statlander is their to stop her. Hirsch gets caught with a corkscrew kick. Red Velvet covers and gets the three count.

QT Marshall knows the whole world is still talking about what Hook did him at Revolution. Marshall is proud of his loss, though. Next week, he is going to invite Hook to the ring and present him with the QT Marshall Certificate of Accomplishment.

The House of Black dominates the match. They beat down Boulder three on one. Fuego Del Sol tries to take them on, hitting King with a missile drop kick, but gets caught with a knee strike. Buddy plants Sol with a flipping neck breaker. He covers and gets the three count.

Winners via pinfall: The House of Black

Penta Oscuro calls out the House of Black in Spanish. Penta lives in the darkness. The Death Triangle is inevitable.

Max Caster isn’t worried about his match with Keith Lee tonight. Keith Lee is a fan of the Acclaimed, but the reality is that Caster will learn a painful lesson.

Caster ducks a clothesline and celebrates. Lee takes a shot to the back of the head; he turns around grabs Caster by the arm. He wrenches it and picks Max up. Caster escapes and hits a drop kick. The ref has to sperate the two and Caster with a cheap shot. Lee blocks a kick and tosses Max over his shoulder. Powerhouse Hobbs walks to commentary.

Anthony Bowens lands a cheap shot behind the refs back. Caster unloads with punches. Lee gets to his feet and takes a chop. Lee with the shoulder block pounce that almost sends Caster out of the ring. Lee with a big throw. Caster with kicks and then a superkick. Caster tries to power Lee up, but can’t do it. Lee with a back elbow and a headbutt. He picks Max up and hits a fireman’s carry powerslam. He covers Caster and gets the three count.

After the match, Hobbs runs to the ring and fights Lee. Ricky Starks runs down and joins in. The Acclaimed jump in. Swerve Strickland makes the save with a chair in hand. Swerve and Lee shake hands in the middle of the ring.

Any show that features Keith Lee in the Main Event is all right in my book. Darby Allin and Teh Butcher had a good match even if it didn’t end in a pin. I wouldn’t say anything on this show was must watch, but I can think of worse ways to spend on hour.