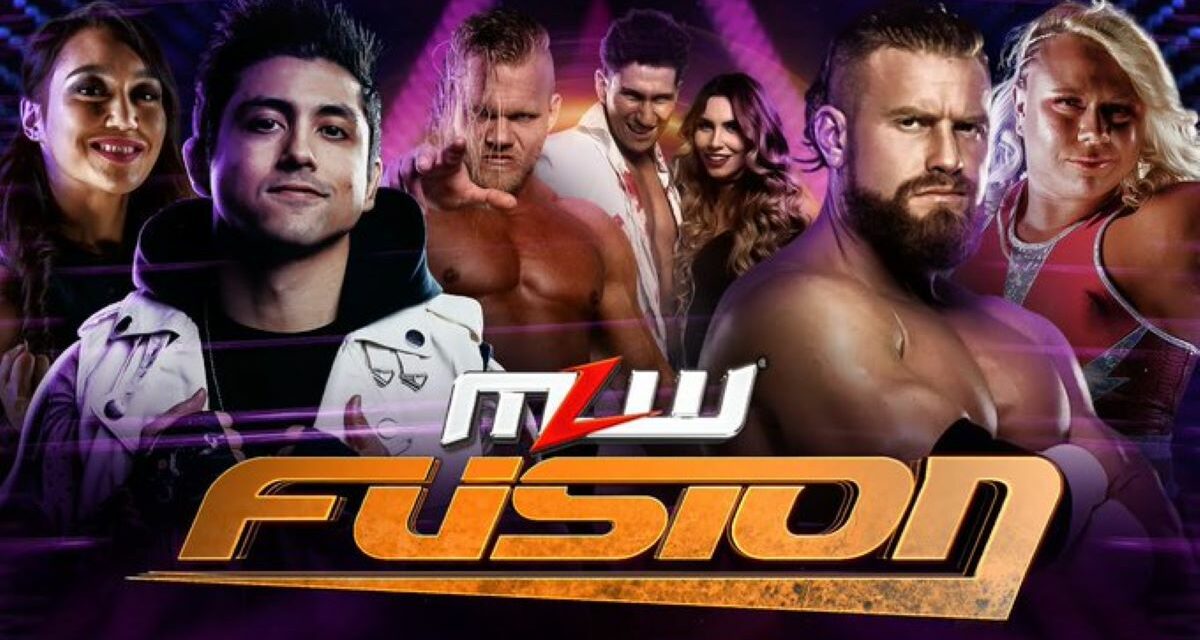 Major League Wrestling has opened the door to any talent that wants to come and fight.  TJP openly mocked the challenge, and said he’s better than any middleweight and cruiserweight out there.  So, the challenge was laid, and Buddy Matthews (aka Buddy Murphy, erstwhile of the WWE) answered the call.  We have that and featherweight action on tonight’s MLW Fusion.

We start with a recap from last week’s aftermath of the heavyweight bout, as Richard Holliday hurt Hammerstone, leaving him bloodied.  That leads to earlier this week, as Holliday cuts a promo in The Grady Cole Center, and the history of the venue and the wrestler that have come through like Dusty Rhodes and Ric Flair.  Speaking of history, Holliday points to a red stain on the floor of the building, and says that was the blood of Hammerstone, and he did what was best in the moment. He ruined a nice white suit but he was able to clean it off and he washed the blood away from his hands…but he notes that the champ’s blood will stay in Charlotte, NC.

We head to the Grady Cole Center, as Rich Bocchini and Joe Dombrowski have the call, and they note a limousine just pulled up and there’s speculation on who that can be.  We’ll find out later, as we head to the First Match of the night, and it’s a double debut of two of the best women wrestlers out there…

As Terry “Bam Bam” Gordy’s girl comes out to a rendition of “Freebird” (which is a douche move to yell a request at a concert; but for a wrestling match…genius!), the fans are jazzed for this match.  Gordy already shows off her the physicality to Rok-C, but The Prodigy has heart and tenacity taking on the Badstreet Babe.

At one point, Rok-C escapes a leg scissors and reverses a powerbomb by Gordy to a huracanrana.  Of course, Gordy has a lot of “Bam Bam” going through the veins, taking Rok-C to Badstreet, USA with a body slam to a sliding elbow that gets her a two count.  Gordy rushes to the corner, and Rok-C dodges the charge as she hits the ring post.  Rok-C fires back with a Thesz Press to punches, and ties to get a pin but Gordy kicks out. She goes for a crossface, but Gordy manages to roll Rok-C to a pin in order for her to break the submission.  Gordy picks her up for a powerbomb, but Rok-C reverses to a sunset flip and then a jackknife pin, but Gordy kicks out at two.  Finally, Gordy is done with this, and nails a statement Bam Bam Slam and it’s “Good Night, Rok-C”, because…

Your Winner via Pinfall:  Miranda Gordy

Bocchini welcomes Gordy to the featherweight division, but she corrects him and says that she is in the power weight division.  After tonight, Gordy notes that Charlotte took a trip to Badstreet, USA.

Now if we can just get the FreeBabes to join the division….

The TV feed interrupts to the Contra logo, and it’s time for Mush Mouth Theatre with Mads Krügger.   Folks, my patience with people that don’t know how to enunciate is super low, and I have no time for this B.S., so here’s the gist:  He challenges Jacob Fatu next week to a Stairway to Hell match.  Got it?  Good.  Moving along, now…!

Gangrel is still coming.  Maybe it’s my lack of enthusiasm for Morbius, but vampires just ain’t doing it for me.

We go back to limo that is idling outside, and Alicia Atout and Richard Holliday roll down the window, and they’re *still* celebrating the pummeling Holliday achieved. They proceed to invite the cameraman to come inside to see how the people with clout live.

Time for a 5150 promo, but it’s with Dr. Julius Smokes.  He says Boogie and Rivera are just getting started in the tag ranks (or…I think that’s what he said.  Seriously, my patience for inane babble is very *low* this week)

We get what appears to be the first of a series of vignettes on what propelled Hammerstone into the squared circle.  Similar to what MLW did with showing a more human side of Jacob Fatu outside of the Samoan Werewolf, We see the first parts of what made Your Boy Hammer the Master of Muscle Mountain that he is today.

Doomsday is approaching as Killer Kross is coming next week.  Get your change ready, because everyone pays the toll.  Tick Tock, yo!

Bocchini gives us a medical update of the MLW wrestlers. Ever since 5150 jumped the Von Erichs, he noted that Marshall Von Erich has a talus fracture of the ankle, keeping him on the shelf for 3-4 weeks.  Ross, on the other hand, has a grade-one concussion and is listed as day-to-day. As for the MLW Heavyweight champion Hammerstone… there are no updates, according to Bocchini, as he refuses doctors, and Cesar Duran’s, orders to be looked over.

Emilio Sparks (or as I like to think of him as the reason man-buns do not look good on any man…ever) goes to EJ Nduka to talk about the assault 5150 did last week. The Judge sagely offers that one must never repay evil with evil, but rather…repay evil with good. Things will get good when justice is served.

Back to the limo with Holliday and Atout, and the couple are just about ready to start to make out, when Atout’s phone starts to blows up.  Apparently doings are a-transpiring, and they bounce from the limo.

Thank God it didn’t go further with the make out session, for all sorts of reasons

We head to the ring, and TJP is on the mic, and he’s on the mic, telling the “crayon eaters” that the indie darlings suck b***s. He absolutely hates this open door or forbidden door or whatever buzzword is overused (same, TJP.  I feel ya.). So he’ll do it under protest to whoever wants to step in the ring with him.

With that, folks, this is your Main Event of the night…

There’s big chants for Buddy, and as he gets on the stick, he says to the Charlotte crowd that he forgot to knock, but he kicked down the door. He directs his gaze at TJP and tells him he’s looking at the greatest cruiserweight ever.

(Author’s Musing Note:  Strange.  Why didn’t the WWE utilize this as a great opportunity to elevate the Cruiserweight belt and push those two…Oh, right.  I’m not part of creative.)

As the bell rings, both men put in a nice clinic of chain wrestling, with neither gaining the advantage.  Matthews holds his own (as Bocchini and Dombrowski lapsed in calling him “Murphy” at times), but at one point, Matthew’s rolls his leg, and starts limping. He goes outside.  The ref checks on him and TJP follows, but Matthews sends him to the guardrails, then slams him on to the apron edge, while he tries to walk it off.  As Matthews climbs back in the ring, TJP hits a dropkick to the back of leg, and then Matthews crumples up, as that leads to…

As we return back to the action, Matthews can barely stand, as TJP prances around in the ring like the jackass he is.  Matthews finally gets back in the ring, and TJP goes for a slingshot senton on the leg, and keeps his focus on attacking the knee.  He caused more damage as he traps Matthews’ arm, and uses the leverage to wrench the bad leg further.

TJP utilizes his submission acumen with a modified side deathlock, but Matthew fights out.  TJP switches to a Figure Four (woo!) leglock, but Matthew’s reverses the move, and TJP gets to the ropes to break the hold.  Matthew’s sends TJP through the ropes, but he manages to move through to the outside.  TJP tries to come back in, and Matthews helps him back with a pendulum DDT with authority.

At this point, both men start swinging with forearms and uppercuts aplenty, but it’s Matthews that start to get the upper hand with a front suplex to two gourdbuster to a suplex, but he can’t capitalize because his leg gives way, and that leads to …

Back to the match (for what I hope is the last gods damned time!) and Matthews tries his old “Murphy’s Law” finisher, but TJP rolls him up, but Mathews kicks out of the pin attempt.  He sends TJP to the corner and rushes, but Matthews gets rocked by a neckbreaker.  Now, TJP scrapes his boot in Matthews’ face.  He goes back to deliver a face wash but Matthew’s catches his leg and pushes him back.  He gets TJP up top, and Matthews attempts with a sunset bomb, but the bad leg gives out again. TJP decides that is a good time to dab, and Matthews traps his head in the top turnbuckle and superkicks with the good leg.  Matthews gets a big powerbomb to a pin, but it’s only a two count.  TJP manages to get the bad leg in a grapevine, and Matthews gets out using the ropes.  TJP tries a detonation kick, but Matthews reverses to a curb stomp to quickly cover, but gets a two count.

Matthews attempts “Murphy’s Law” again, but TJP escapes.  Matthews comes back with two high knees, and forces to the corner for a powerbomb, but TJP wiggles out.  Matthews tries to get a superplex, but TJP blocks and pushes him off. One Mamba splash to the knee of the bad leg, and TJP covers for a two count, but TJP transitions to ankle lock in the center of the ring, and finally Matthews has to submit.

Your Winner via Submission:  TJP

We go to Cesar Duran’s office, and El Jefe addresses the “renegades” on the status of Hammerstone.  He states there has been no update, and he has “deep concerns” on his well-being. He can’t hide the cackling laughter as he states if Hammerstone doesn’t come to the ring next week, the title will be vacated, as the show fades to black.

Two great wrestling matches that bookended what felt like an endless plethora of promos and vignettes.  TJP looks great, and Gordy’s star is on the rise.  Now, if only there was a good third match…

Either way, this was fun, and the Main Event delivered.  We’ll see what the fallout is between Your Boy Hammer and El Jefe, as we see you on seven!