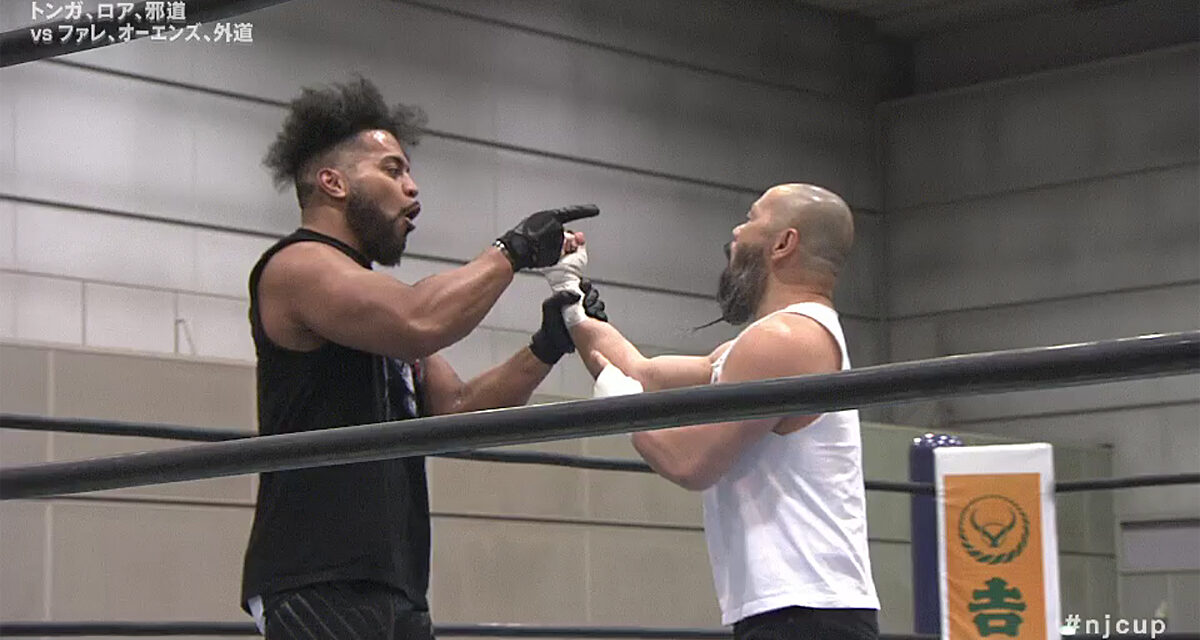 The war between Bullet Club and The Guerrillas of Destiny continued as two more entrants moved on in the New Japan Cup on night ten.

In what turned out to be mostly a pure wrestling match, Zach Sabre Jr. defeated The Great-O-Khan by making him submit to an arm-bar.

Will Ospreay scraped by Sanada by getting his knees up to block Sanada’s Moonsault from the top rope. Sanada kicked out of the Hidden Blade. Ospreay snapped bashing Sanada with elbow after elbow in the head. Kevin Kelly wondered if Red Shoes would stop the match. Ospreay readied Sanada for another Hidden Blade. Sanada just fell over. An angry Ospreay battered Sanada with even more elbows and forearms. Red Shoes eventually called for the bell and the match to be stopped due to knockout.

As it stands now the quarterfinal round is:

Bullet Club and The Guerrillas of Destiny got into it even before their match began.

Taiji Ishimori and El Phantasmo attacked the IWGP Junior Tag Champions, Ryusuke Taguchi and Master Wato, after their match against El Desperado and TAKA Michinoku. Taguchi fought them off with his leaping butt attacks though. Bad Luck Fale and Gedo joined the beatdown but Tama Tonga, Tanga Loa and Jado cleared the ring.

Everyone brawled through the curtain into the backstage area.

Tama Tonga, Tanga Loa, Jado and Bullet Club burst back through the curtain scrapping with each to start their match. Jado pummeled Gedo all around the ringside area. Gedo was surrounded inside the ring. Fale jumped in before he could be swarmed.

Gedo choked out Jado as everyone else fought on the floor. Owens stomped Jado in a corner telling him he isn’t he boy any more. Fale and Owens both stood on the back of the Master Heater giving him an unwanted Tongan Massage. Bullet Club isolated Jado for much of the match as they took turns throttling him. Jado almost made it to his corner but Fale knocked Tonga and Loa off the apron.

Fale and Owens were splashed by the Guerrillas of Destiny in a corner. Jado joined the attack on Owens. Loa stopped Gedo before he could bring his brass knuckles into play. He yanked them off Gedo’s hand disarming him. The official then got on Loa’s case for being in possession of the knuckles. That allowed Owens to hit a low-blow and a running knee strike on Jado for a three count.

Phantasmo’s jacket is a tribute to the nWo vest Scott Hall used to wear. Phantasmo pins Tiger Mask with a low-blow and Sudden Death.

Yujiro pins Bushi after striking him in the head with his cane. As Shingo is distracted by the rest of The House of Torture, Chase Owens hits him from behind with a steel chair and then gives him a Package Piledriver on the chair.

Goto and Hashi put Douki away with Shoto.