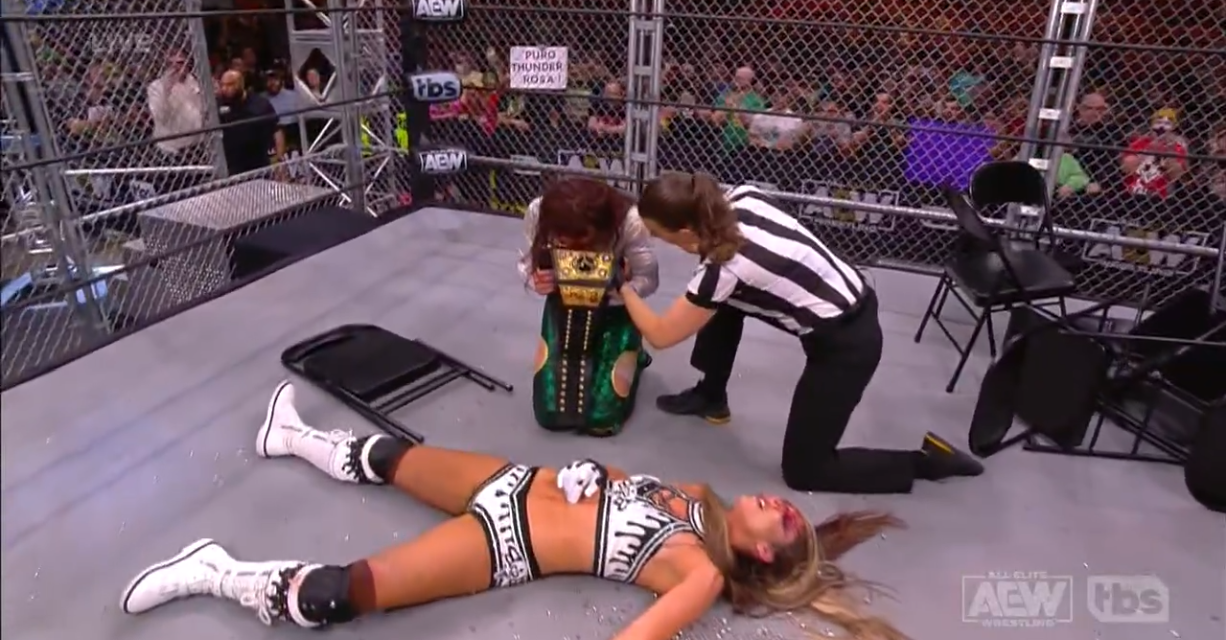 Tonight isn’t any old Wednesday night for AEW Dynamite; prepare for St. Patrick Day’s slam from a city with deep Irish roots… San Antonio? Venues aside, this show should be a pot of gold at the end of the wrestling rainbow. Thunder Rosa is taking on Britt Baker for the AEW Women’s title with the homefield advantage in a steel cage. While Wardlow isn’t sitting on his “Face of the Revolution” title shot, as he takes on the new champion Scorpio Sky tonight. And this being cowboy country, AEW Heavyweight Champion Hangman Adam Page is on the card in a trios match.

Man, the AEW crowd loves Adam Cole. ReDRagon is able to cut off Luchasaurus from his corner and work him over with quick tags. Page gets the hot tag, cleaning house. The champ launches himself over the top rope multiple times to take out Cole and company. He scores a two count after a powerbomb on Fish and looks for the Buckshot Lariat. Fish rolls out of the ring and regroups with his team. Jungle Boy uses Page to launch himself out of the ring, taking out his opponents. JB, Luchasaurus and Page climb the same turnbuckle and all hit moonsaults on all three opponents. Jungle Boy gets caught in the ring, allowing Fish and O’Reilly to take turns hitting him in the corner.

After a commercial break, Luchasaurus is handing out choke slams for everyone. A standing moonsault can’t score a pinfall on O’Reilly though. Cole connects with a superkick and O’Reilly applies a leg lock. Cole locks in a bear hug on Page, but they fall into O’Reilly breaking both holds. Page and Cole face off and the champ hits the dead eye. All six men are in the ring. Jungle Boy delivers a dual Doomsday Device to Cole and O’Reilly. Fish sends Luchasaurus to the floor with a low bridge. Jungle Boy gets caught outnumbered and ReDRagon with a high low. Cole tags in to lower the boom with the knee to the neck. He covers Jungle Boy and gets the pin.

Ricky Starks and Powerhouse Hobbs explain to Keith Lee why they jumped him last week. Lee all but dares them to do it again.

Mox and Danielson rush Yuta and Taylor before the bell. Taylor with a single leg crab on Bryan, but Mox is able to reach for a tag and break the hold with a lariat. Danielson tags in and puts Taylor in a lag hold. Moxley with a short drop kick to Taylor’s face. Mox with a back suplex off the middle turnbuckle.

After a commercial break, Mox runs into a kick from Taylor and Yuta tags in. Wheeler goes up top and leaps over Mix. Jon catches him with a strike and then catches him again coming off the ropes. Danielson with a distraction to Yuta, who walks into a cutter. Taylor breaks the pin. On the floor, Taylor looks for a piledriver. Moxley bites him on the nose and hits the Paradigm shift. In the ring, Danielson with the kicks and Yuta wants more. Mox runs in for a suplex and Bryan hits one of his own. He bridges into a pin, but Yuta kicks out. Bryan starts to kick Yuta into the mat as Mox tags in. He applies the bulldog choke and Yuta taps out.

After the match, Wheeler Yuta stops on the ramp. The Best Friends want him to keep walking, but instead he joins William Regal, Danielson and Moxley in the ring. Regal slaps him across the face and Yuta does not back down. Regal tells him to go away.

Tony Schiavone is with FTR, who explain why they fired Tully Blanchard. The Young Bucks crash the interview who tell them that deep down FTR knows they will always be second best.

The Acclaimed are bragging how they are going to beat Keith Lee on Friday. Ricky Starks and Powerhouse Hobbs tell them that’s it is their duty to put down these new people. Swerve Strickland cuts Starks off, telling him that Friday night is his house.

It’s the first official meeting of the Jericho Appreciation Society. 2point0 speak highly of their new leader before introducing him. According to him, we are lucky to be alive during the Chris Jericho era. Apparently, we don’t appreciate him. The Inner Circle certainly didn’t. Jericho calls him a sports entertainer, which doesn’t go over well with the crowd at all. Daniel Garcia needs to get something off his chest. If Jericho is a sports entertainer, so is he. Jericho reveals that he helped Garcia come back from a bad car wreck. Jericho also has retired the name 2point0. They will go by Matt Minard and Angelo Parker. Jericho calls Jake Hager his ride or die. He’s the one man he can always trust. Hager announces the group as the JAS and they beat up pro wrestlers. Today, the era of sports entertainment begins in AEW.

Sky gets right up in Wardlow’s face, but backs off when the crowd starts chanting for the challenger. Wardlow beats Sky into the corner and then slams him in the middle of the mat. The challenger tosses Sky across the ring. Wardlow blocks cutter coming off the ropes. Sky fights his way out of a powerbomb, but then runs into a one handed chokeslam. Wardlow calls for the powerbomb symphony. He hits the first movement and delivers on the second. Wardlow with a third powerbomb and Dan Lambert jumps to the apron. Wardlow scares him off as Sky rolls out of the ring. Wardlow wants a bomb on the floor, when Shawn Spears walks down the ramp with chairs in hand. Wardlow wants him, only to be attacked from behind by MJF. Wardlow hits the ring post and rolls into the ring. Sky gets to his feet and rolls Wardlow up. He gets the three count.

After the match, Wardlow fights off Sky and Spears, getting his hands on MJF. Spears saves him with a chair shot before Wardlow can powerbomb him. Spears picks up Wardlow’s chin with a chair, lining him up and connecting with a shot. MJF pays off Dan Lambert and puts the diamond ring on. Wardlow gets to his feet only to be put down by MJF.

Jade Cargill is approaching a milestone, 30 and oh. Jade wants to know who is going to step up.

Private Party vs. The Hardys

I’m glad the Hardys dropped the Boys from their name, they are both well over 40 at thus point. Although, they are pretty much wearing the same ring gear from 20 years ago. Marq Quen taunts Matt with a thumbs down, so Hardy decks him. Jeff Hardy hits Whisper in the Wind on Isiah Cassidy. Matt Hardy gets caught in the corner, as Private Party yank him by the legs into the turnbuckle. Hardy goes to the floor and Quen flies over the top rope to take him out. Cassidy and Quen then hit Matt with a neck breaker/stomp combination. Cassidy taunts Jeff, but Matt is able to catch him with a clothesline. Jeff gets the hot tag. He hits the double leg drop on Isiah and follows with a Russian leg sweep. Jeff with a facebuster and goes up top. Quen cuts him down on the turnbuckle and looks for Gin and Juice. Matt catches Quen with a Side Effect and hits Cassidy with a Twist of Fate. Jeff with a diving splash. Isiah counters the Twist of Fate and looks for Silly String. The Hardys counter with dual Twist of Fates. Jeff goes up top and hits the swanton bomb. He covers Cassidy and gets the three count.

Winner via pinfall: The Hardys

After the match, the Andrade Family Office makes their way to the ring, surrounding the ring. Sting and Darby Allin run out to help. The skateboard and bat that they hold help to even the odds. The AFO backs off.

Red Velvet is going to put a stop to Leyla Hirsch.

Rosa gets an all female Mariachi band for her entrance. Hard to believe it’s been one year since the Lights Out match between these two. Baker looks a bit overwhelmed at the bell and immediately tries to escape by climbing the cage. She must be forgetting that only pinfall or submission can win the match. Rosa with a kick and a huge clothesline. She tosses the champ head first into the cage. Baker is bleeding and Rosa tries to open her up even more. Baker is slammed in the middle of the ring and then slammed into the cage head first repeatedly. Britt reverses a whip, sending Rosa into the cage. Baker introduces chairs into the equation. Rosa uses the chairs to her advantage and follows with a stunner. She connects with a clothesline in the corner and follows with a double knee strike. A drop kick in the corner leads to a pin, but the champ kicks out. Baker with a back elbow and looks for a super kick. Rosa dodge as Baker connects with the referee. He is then knocked into the cage. Rosa with the Thunder Fire Driver and makes the cover, but there’s no ref to make the count. Rosa goes up top, but Baker cuts  her down with a chair shot. Baker piles chair in the corner. Baker gets Rosa up and hits the Air Raid crashes onto the pile of chairs. Referee Aubrey Edwards runs down to make the count. Thunder Rosa kicks out at two. Baker grabs Edwards getting in her face. The champ sets up more chairs, as Rosa is down in the corner. The champ takes her challenger up the turnbuckle with bad intentions on her mind. A pyramid of chair waits for Thunder Rosa, but she fights back. Both competitors fight on the turnbuckle. Baker is slammed into the cage wall and falls back onto the pyramid of chairs. After kicking out of pin, the champ with a desperation super kick. Baker grabs a bag of thumbtacks and spread them over the mat. Rosa counters a neck break, but the champ counters the power bomb with a back body drop onto the tacks. Baker wants the Lockjaw. Rosa bites the hand and then smashes Baker’s hand into the tacks. Rosa hits a power bomb onto the tacks. The champ with a chair shot. Thunder Rosa hits the Fire Thunder Driver onto the thumbtacks. She covers and gets the three count. We have a new champion.

That’s the show. Nick Tylwalk will return next week.

AEW Dynamite keeps churning out must watch shows. One year after their Lights Out match that received rave reviews, Thunder Rosa and Britt Baker did it again; this time in a steel cage. Even when things are predictable; we all knew MJF was going to cost Wardlow a chance to win the TNT, it is still entertaining. You should also check out Jericho’s promo spelling out what the goal of the Jericho Appreciation Society is.