Bullet Club turns on The Guerrillas of Destiny 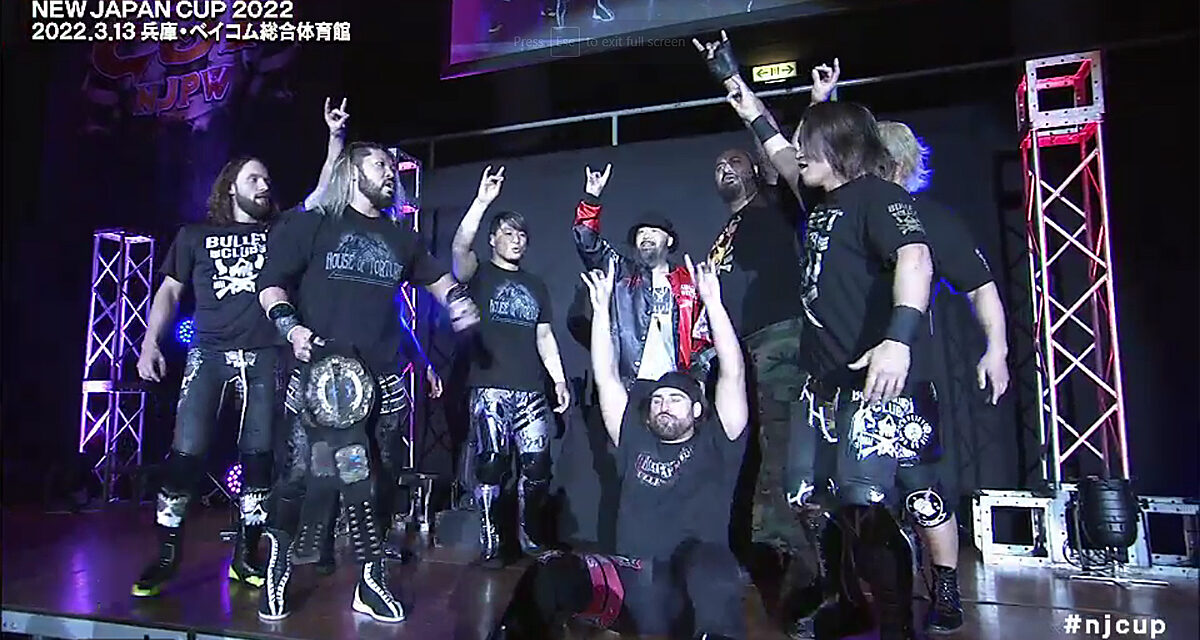 The semi-finals of the New Japan Cup are set. On night seven four more contenders advanced in what were some more predictable outcomes. What nobody saw coming though was that this would be the night when like Finn Balor, A.J. Styles and Adam Cole before them, The Guerrillas of Destiny would be unceremoniously kicked out of Bullet Club with a group beatdown.

Bullet Club and its sub-faction House of Torture collided in an awkward encounter in which founding Bullet Club member Tama Tonga took on Evil.

In 2020, Evil joined Bullet Club turning his back on his pals in Los Ingobernables de Japón. Since then, Evil formed his own faction within the faction with Dick Togo, Sho and Yujiro Takahashi. The House of Torture hasn’t always played well with their Bullet Club brethren. Tonight was no exception.

Evil removed one of the turnbuckles. Tonga caught Evil with a standing drop kick. Jado cheered Tonga on as Togo lingered in the background. Evil slammed the turnbuckle pad over and over on Tonga then strangled him with the edge of a steel chair. The match still hadn’t reached the actual ring yet.

Evil hurls Tonga into the barrier knocking over the timekeeper and their table for a second time. Evil chokes out Tonga with a camera cord as Jado looked on.

The official had to finally pull Evil off of Tonga.

Evil finally rolled Tonga into the ring. Evil whipped Tonga into the exposed turnbuckle. Tonga nails Evil with drop kick after drop kick. The crowd cheers Tonga on. Tonga hits the Gun Stun but Togo pulls the official out of the ring before they can slap three.

“Dick Togo, you son of a bitch!” yelled Kevin Kelly.

Togo snuck into the ring choking Tonga with his garotte. Jado comes to Tonga’s aid strangling him with a tag rope. Sho and Yujiro Takahashi attack Jado from behind. El Phantasmo and Taiji Ishimori hit the ring. Sho and Yujiro head for the hills.

Ishimori helps Tonga to his feet…so that El Phantasmo can super kick him right in the face.

“Sudden Death! You son of a bitch!” yelled out Kelly.

Evil hits Everything is Evil winning the match.

Kelly explains that Phantasmo and Ishimori have chosen Jay White’s side of the Bullet Club civil war.

House of Torture, Phantasmo and Ishimori stomp on Tonga. Surprisingly, Jado comes to Tonga’s aid hitting anyone standing with his kendo stick. Jado leans over Tonga to make sure he is okay.

Chase Owens slides into the ring hitting Jado with a running knee strike. Owens punches Jado over and over as Bad Luck Fale enters the ring. Fale is about to give Tonga a Grenade but Tanga Loa races down punching Owens in the face.

“F–k you! You son of a bitch!” Loa yells at Fale who Grenades him down to the canvass.

The Guerrillas of Destiny and Jado are dragged into the middle of the ring where they are kicked and stomped by Bullet Club.

Everyone looks to the entrance way. Out comes Gedo who is all smiles. Gedo punches Jado with his brass knuckles in the ring. 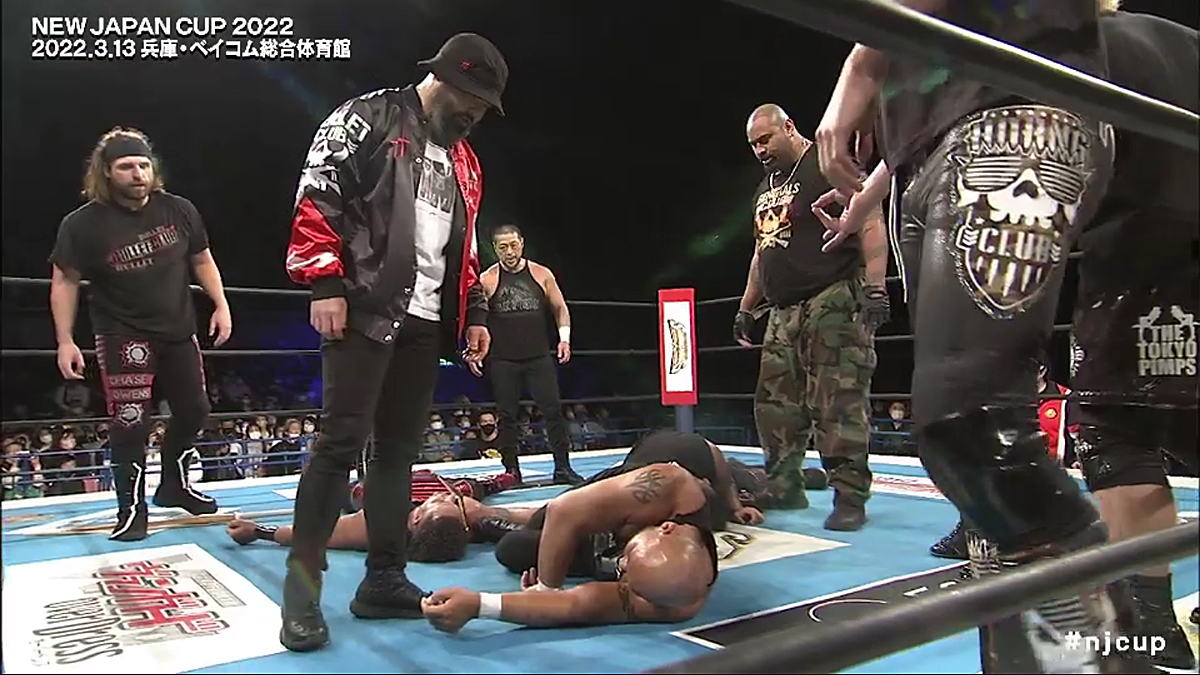 Gedo leads the attack on their former friends. Courtesy: NJPW.

Bullet Club does their “Too Sweet” salute over the fallen bodies of The Guerrillas of Destiny and Jado. 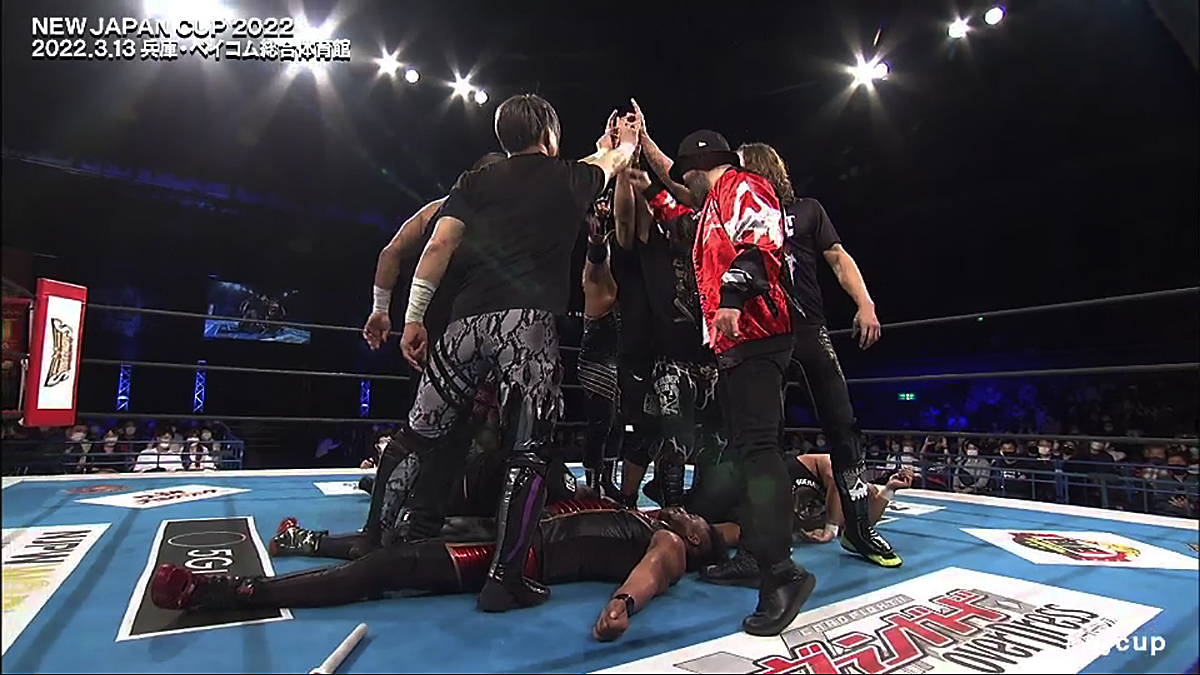 Round Three of the New Japan Cup will be:

Taka is pinned with Hashi and Goto’s Shoto. 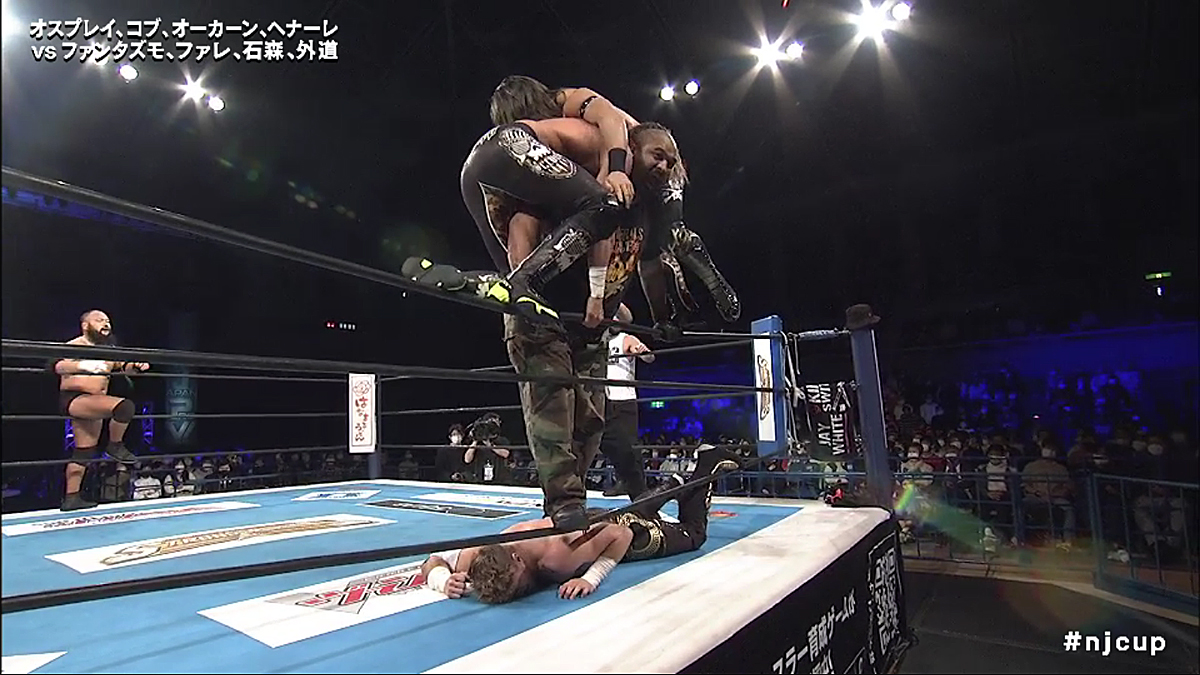 Bullet Club piles on Will Ospreay. Courtesy of: NJPW.

In a battle of the bulls, Takagi moves on with a Pumping Bomber.

Hiromu Takahashi gets a win with a sneaky roll-up that stuns the crowd. An irate Suzuki complains that it was only a two count. Suzuki takes out his frustrations out on a Young Lion who he punches off the entrance way to the floor below.