NWA USA has tons of prospects to showcase on this PowerrrSurge 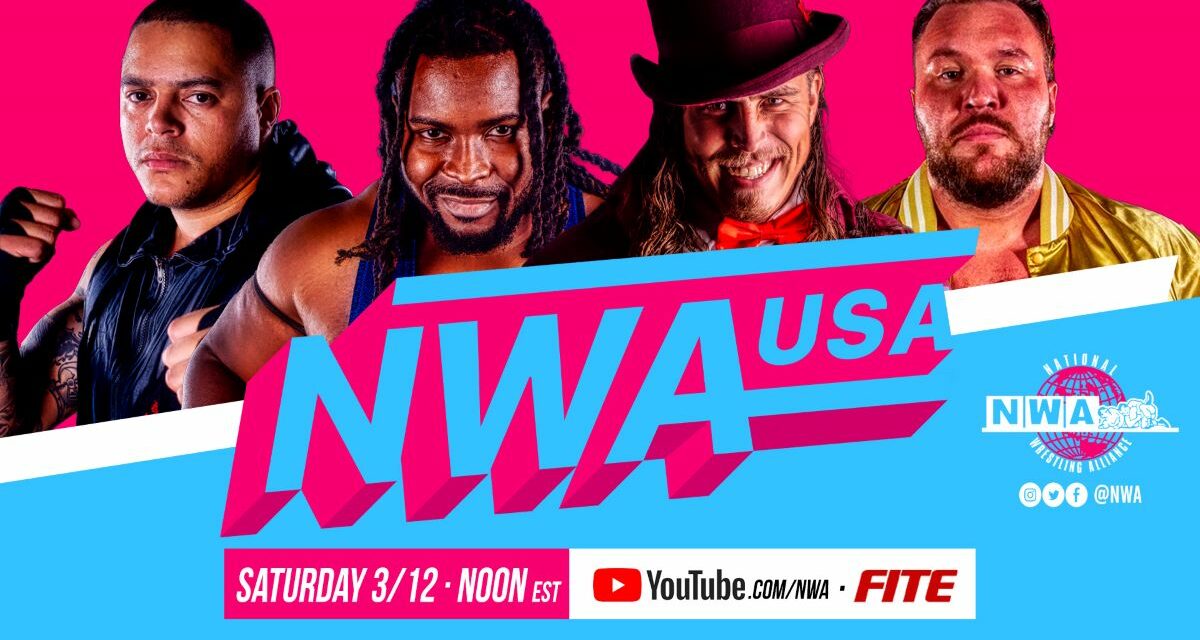 This week on a special PowerrrSurge edition of NWA USA, we take a look at some of the NWA’s hottest prospects to step into the ring of the National Wrestling Alliance.  As we get ready for The Crockett Cup, in one week’s time, who will stand out as a future superstar on this episode, where we will see third generation wrestler AJ Cazana take on Fable Jake, and Big Strong Mims faces off with the boxer-turned-wrestler Diante.

Joe Galli introduces us to this episode of PowerrrSurge, as he introduces fans to the first of two prospects from the GPB Studios in Atlanta, GA, and it’s your First Match of this Saturday special…

Robles is no stranger to the NWA, but if this is your first time seeing Graves, the dude is a big guy that moves similar to The Junkyard Dog of old.  I’m probably conjuring this image as he barks at Robles, as they tie up and Graves just swings his weight around on his lighter opponent.  Graves sends Robles to the corner, and barrels down like a freight train with a tremendous splash.  He goes for another, but Robles rises and sits down on Graves, sending him headfirst to the middle turnbuckle to daze the big man.  He tries to roll up Graves, but gets a two count.  From there, the match is all Graves wearing down Robles’ back and neck.  He hits the ropes and attempts a frog splash, but Robles rolls away.  He attempts to overpower the bigger Graves, but…yeah, that’s cute.  As Graves get back in control, he gets a little cocky, and that’s enough for Robles to land a desperation neckbreaker to get the pin in an upset victory.

Your Winner via Pinfall:  Miguel Robles

Galli takes us back to events from the PowerrrTrip at Valor Hall in Oak Grove, KY, where fans saw the transformation of the man known as “Fable Jake”, as he casts a spell on the fans to become… 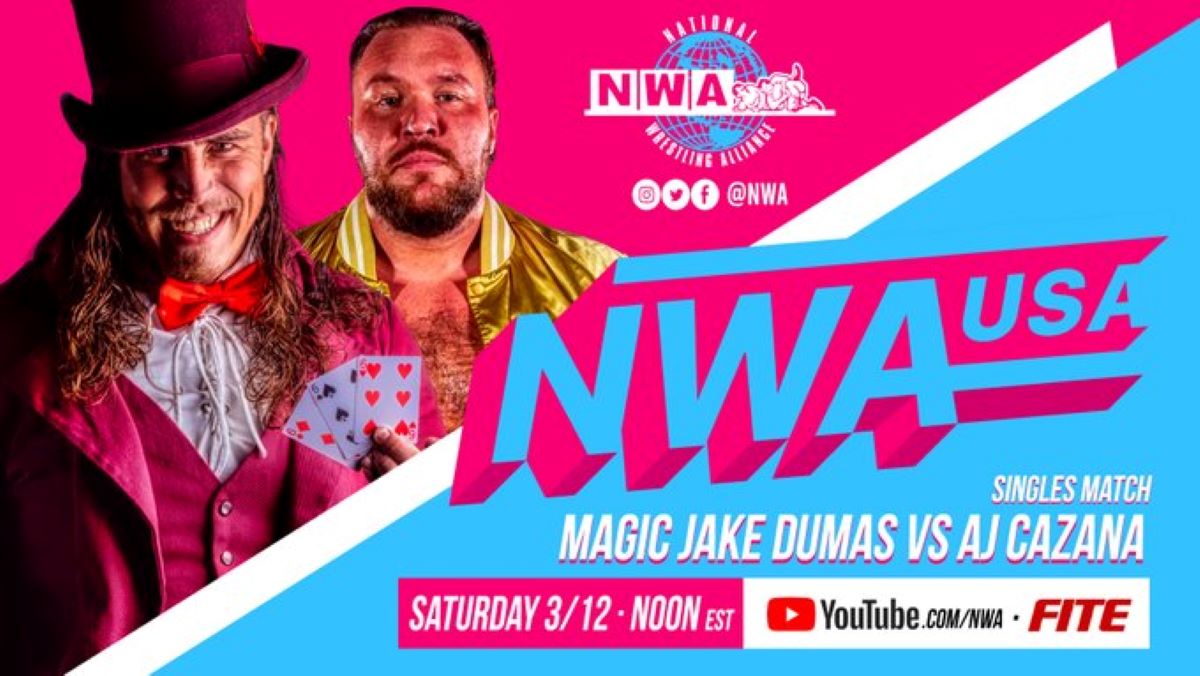 If this is your first time seeing the Jake in his new incarnation, he was mostly used in jobber matches on previous episodes, with lighter hair and sparkly tights.  This night, Jake comes to an intro that has him looking leaner and darker…literally.  His hair and goatee are dyed black, and he swaggers to the ring with a cigarette (unlit) between his lips.  Cazana is in the ring, but he’s no slouch, as he is the son of Joe Cazana, and the grandson of promoter John Cazana, and recently a trainee of one Dr. Tom Prichard.

As the bell rings, Dumas shows a more aggressive side than in previous showings, pummeling poor Cazana in the ring.  At one point, Dumas batters Cazana in the center of the ring, he pulls out his cigarette to get the cocky one leg pin, but the third generation wrestler kicks out.  Cazana manages to fire up and throws some heavy clotheslines to the mean magician, but as he whips Dumas to the ropes, he gets a crossbody on Cazana and transitions to a TKO, and…Ta-Da!

We get clips from the final NWA POWERRR episode of PowerrrTrip, but really, do me a favor:  Just click here to see all the action you missed.

Galli take us back to the GPB Studios, for the Main Event that features… 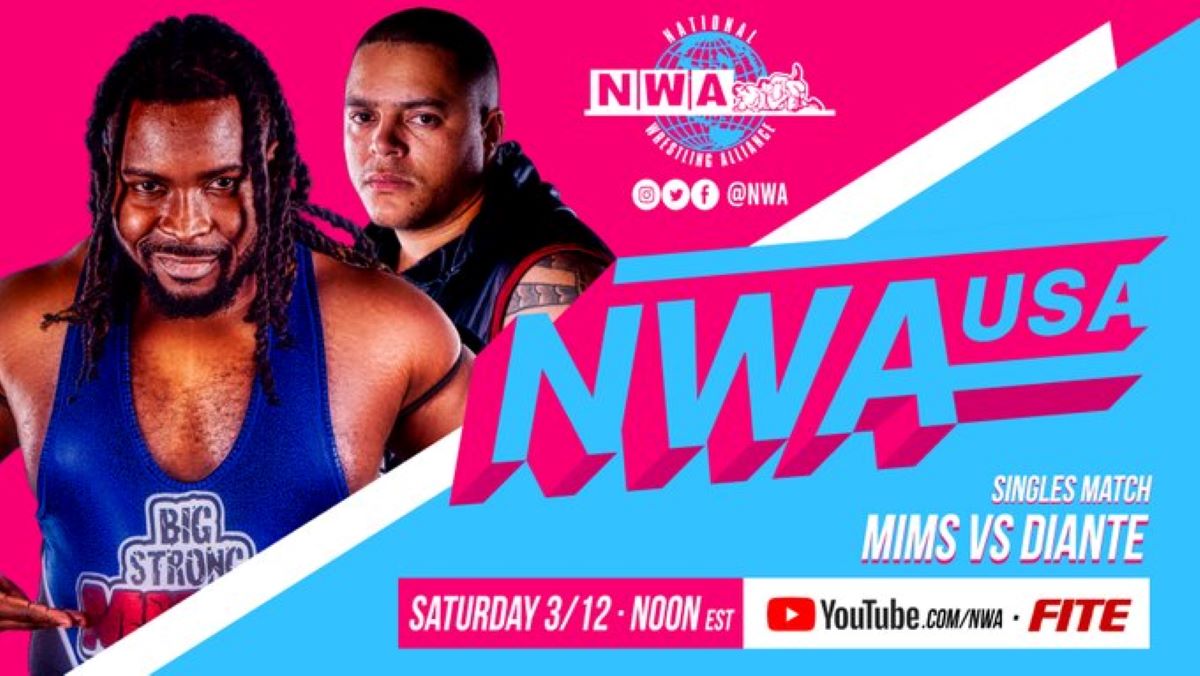 Galli notes to Austin Idol and Velvet Sky that both men are students of Anthony Mayweather, the man formerly known as “Crimson”  Naturally Idol and Sky bicker and…yeah, you know what I realized?  This back and forth bicker fest is reminiscent of my parents’ divorce, when they did a similar thing in front of me and my siblings.  I didn’t care for it then, and I don’t care for this remix now.

Maybe I should share this with my therapist rather than with people reading my drivel, eh?  (By the way, that was a rhetorical question.  Don’t send any hate mail, because that’s what Reddit and Twitter are for.)

Back to the match, Mims easily takes down the former boxer with his strength, but Diante has a few moves of his own, as he gouges his eye, and gets Mims in a side headlock. Mims picks him up, but Diante rolls through and keeps the side headlock on tight.  Mims gets back up to a standing base, and hits the ropes to deliver, Galli calls it, a “hat trick of shoulder tackles.”  Mims shoot the boxer to the ropes and leaps, but Diante stops the momentum with a shot to his solar plexus.

Diante gets Mims in the corner and shows off the sweet science of the boxing sport by working the heavy bag (if you will) and finishes with an uppercut that rocks the Big Strong Man to the corner. Diante is starting to get overconfident, as he follows with stomps to the corner.  Diante thinks he has this in the bag, but Mims fights back.  The former boxer goes for a haymaker that misses the mark, but Mims gets a huge head-butt, followed by a clothesline. One Big Strong Slam, and that’s all she wrote as he pins for the one, two, and three!

Galli thanks us, and tells the fans we’ll see them again at The Crockett Cup, as the show goes to credits

Before some snark notes I am violating my policy of “I don’t recap squash matches”, this is the exception to the rule.  I’m okay about when I see that there is raw talent to behold, and this is such a case.

I would say, moving forward, keep your eyes on Cazana, Graves, Dumas, and Diante as they have tons of potential, whether in the NWA or elsewhere.  If they get the right angle/storyline, fans will get behind these men every time they step in the squared circle.

Next week is The Crockett Cup PPV, and we’ll have a lot of stuff to cover between now and the double PPV.  Until then, See ya in Seven!