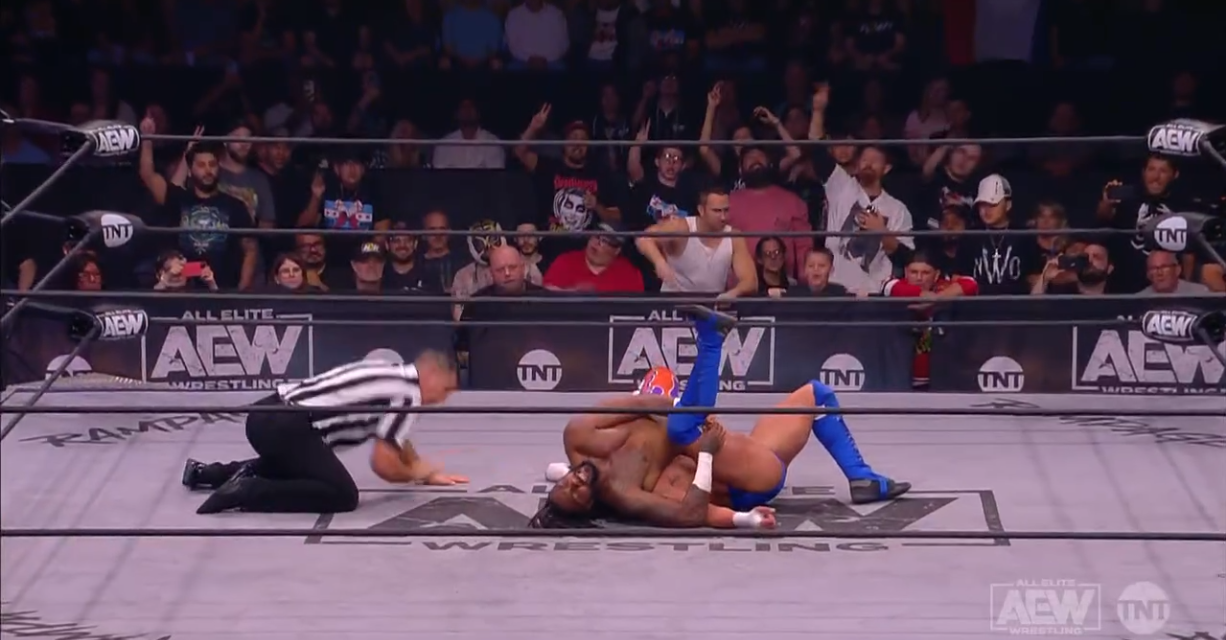 What a week for AEW coming off of Revolution; things really got shaken up on Dynamite. Will that carry over to Rampage? I’m guessing not, but we will see the in ring debut of Swerve Strickland. The fallout from several factions breaking up and reforming with new members will have to wait until next week. Let’s get right to the action.

Well, the announcers bring up how Private Party turned on their mentor Matt Hardy on Wednesday, which led to Jeff Hardy making his AEW debut. What I failed to mention in my Dynamite report was how Jeff took the time to dance on the ramp, while poor Matt was getting the stuffing kicked out of him in the ring. Quen and Cassidy take the time to trash talk Sting after Allin is slammed into the ring steps. Quen and Allin fight on the top rope. Darby with a superplex but only gets a two count. Allin can’t get over on a sunset flip and Quin counters with a backflip knee drop. Allin runs into a double knee strike in the corner and Quen hits a backflip flatliner. Allin floats over on a suplex and hits the scorpion death drop. Sting yanks Cassidy off the apron and sends him into the barrier. Allin knocked to the floor and Marq hits a 450 splash off the turnbuckle to the floor. Back in the ring, Allin dodges a shooting star press and counters with an arm bar. Quen taps out.

After the match, Andrade and the home office walk the ring. Matt and Jeff Hardy immediately hit the stage. Andrade and company clear out.

Dan Lambert talks of wrestling history and says Wardlow will go down as a footnote after Scorpio Sky beats him.

Martinez unloads on Hayter in the corner. Hayter claws at the eyes and then stomps Mercedes into the corner. After the break, Mercedes with a double underhook suplex, but can’t get the pin. Hayter with a backbreaker, but only scores a two count. Hayter connects with a massive forearm shot that sends Martinez to the mat. Mercedes fights back, throwing Hayter into the turnbuckle. She place her up top and drops her with German suplex. Baker takes a cheap shot at Martinez behind the refs back. Hayter with a big lariat and covers to get the pin.

After the match, Britt Baker looks to add insult to injury, but Thunder Rosa runs in with a steel chair to chase them off.

Keith Lee takes the time to bask in his glory as the crowd serenades him. Marshall takes offense, so Lee head butts him. QT with a thumb to the eye, allowing an opening to land some body shots. A double overhand chop sends Marshall to the mat. Lee throws QT across the ring. Marshall hangs Lee off the top rope and connects with a missile drop kick. Lee puts the brakes on an Irish whip and catches QT with a lariat. Lee picks up QT and the members of the Factory run interference. Marshall looks for the Diamond Cutter, but Lee blocks. A shoulder tackle turn Marshall inside out. Lee hits him with a jack hammer and covers to get the pin.

After the match, the Factory tries to attack Lee, who fights them off. Team Taz takes offense, Ricky Starks and Powerhouse Hobbs hit the ring. Hobbs with a spine buster and puts Lee down.

Tony Nese requested this match because he deserves the recognition that Swerve has received this week.

Nese rolls out of the ring after a wrist lock. Swerve takes him down in the ring, controlling him with a chin lock. Nese scrambles to the ropes to avoid a single leg crab. A head scissors takes Nese down and Swerve with a low drop kick. Nese tries a low bridge, bit Swerve lands on his feet. Nese somersaults over Strickland on the apron. Swerve avoids a lariat and hits a knee kick from the apron. Nese uses the apron skirt to blind Swerve and knocks him to the floor.

Back in the ring, Nese has a body scissors locked in and the two men chop away at each other. Swerve with a body shot, but then rolls right into a strike. Nese misses a moonsault off the middle rope. Swerve with an uppercut to the back of the head and follows with a pop up slam. He rolls through into a dead lift brain buster. Nese kicks out at two and then catches Strickland with an uppercut on the top rope. Nese follows with doubles knees to the mid section, but can’t get the pin. Nese goes up top and connects with a 450 splash. Swerve kicks out at two. A frustrated Nese trade shots. Swerve takes Nese to the apron and kicks him. He hits a foot stomp and then slings himself over the ropes and rolls through into a double knee strike. Nese kicks out. After a heel kick, Swerve goes up top. He hits the stomp from the top and covers to get the win.

That’s the show, next week Rampage will start late because of the NCAA tournament.

AEW Rampage provided yet another solid hour of wrestling, but that’s about it. I wouldn’t call tonight must see, but if you a fan of Keith Lee, Darby Allin or Swerve Strickland it’s worth the time.