SmackDown: Lesnar is out for blood 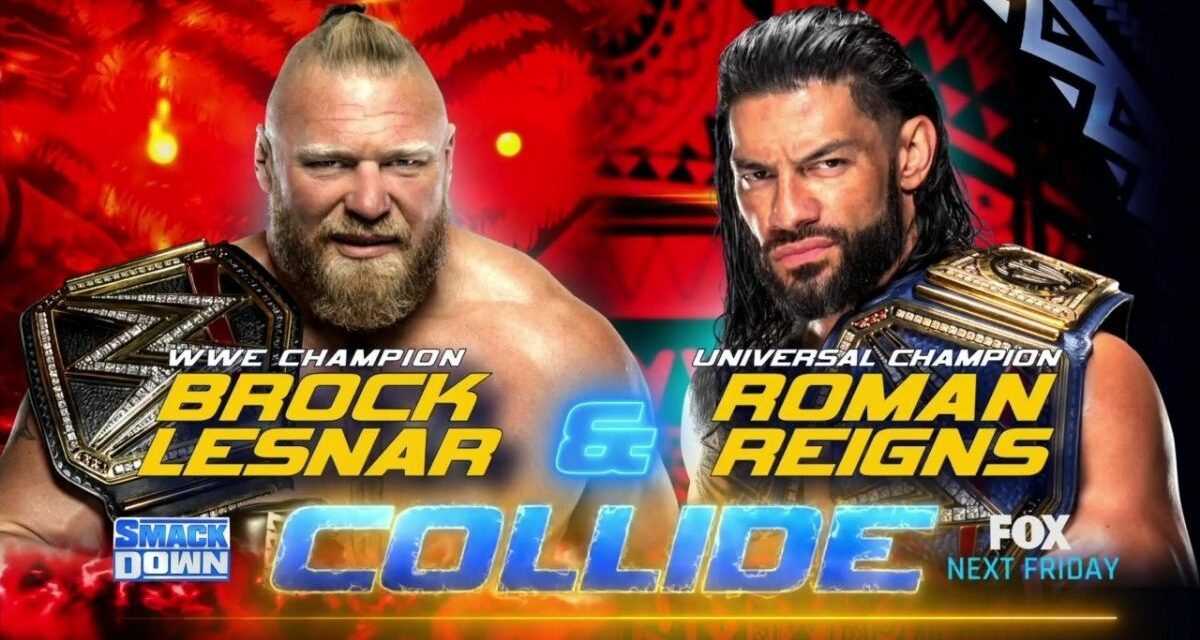 Only 22 days till WrestleMania weekend for the biggest event in WWE history.

Brock Lesnar was in a mood after a brutal attack from the Bloodline and Roman Reigns last week involving steel stairs.

Lesnar demands for the rules to be re-written given how messed up the tension has gotten.

The weasel, the rat and the snake, Paul Heyman shows up asking for commercials to be brought in. “You got bleed by the Bloodline!” Heyman said as a reminder to Lesnar. Apparently, Reigns is not here tonight.

Lesnar told Heyman to shut up and asked him who’s going to protect him tonight due to Reigns’ absence. Heyman literally ran away so fast that Brock couldn’t catch up because the security got in the way. A lost opportunity to beat Heyman up. What a shame. That’s a way to start the evening. Now, on with the brawling.

Given last week’s unfought match and the wrecking of Big E’s ATV ride, Sheamus says they improved it. Both Sheamus and Holland were accompanied by this guy named Butch. Who the hell is Butch?? Another British wrestler, apparently. [Editor’s Note: Pete Dunne, not that WWE would ever acknowledge it.]

Kofi went after Sheamus so quick when the match started, going in as hard as he can. At some point during the match, Ridge brawled, of course. I’ve never seen Ridge wrestle.

There was a shoulder slam from Ridge towards Kofi. He also performed a knee hit to Kofi’s face. Holland got scared once Big E entered the ring. Big E was seen taking it out on Sheamus as compensation for his broken birthday gift.

A nice leap frog move from Big E to avoid getting hit by Sheamus.

There were ten chest hits from Sheamus onto Big E later on came as no surprise. I was counting as he did so. Kofi takes out Holland before he could hurt Big E while E attempts a stomach drive onto Sheamus only to land on the ring’s edge. Big E performs a throw over his shoulder as he and Holland crawl to tag their partners.

From the top rope, Kofi jumps Sheamus and does his ‘SOS’ move after hitting Holland.

Big E tries to help Kofi and gets thrown and lands on his head, completely knocking him out cold and unable to help his teammate. Sheamus hard kicks Kofi for the unfortunate win. I like Sheamus’ hardcore style, just not this one. [Editor’s note: Big E was stretchered out and later reported he suffered a broken neck.]

Kevin Owens challenged ‘Stone Cold’ Steve Austin for WrestleMania. Countless fans were glad that Austin is back to wrestle one more time according to the social media comments.

A KO match challenge suggested by Owens is set in place and in order to get Austin out here, he tramples on Austin for drinking beer. Stone Cold thanks Owens for waking something in him and goes on to say that he’s a dumb son of a b*tch and waiting to get his ass kicked.

Sami Zayn is pissed again about his loss, only this time, Knoxville releases Zayn’s phone number to the world using an airplane and using his Instagram to share his prank.

Because of the 20,000 texts or more he got, Zayn wasn’t able to prepare for his rematch against Ricochet. Zayn says Rico got lucky because Knoxville interrupted.

There was a match due between Drew McIntyre & the Viking Raiders vs. Madcap Moss, Happy Corbin & Jinder Mahal, a 6-way tag team fight. But, it was a setup to beat the Raiders and leave McIntyre alone to be trampled by Madcap, Happy Corbin, Tinder oh sorry… Jinder Mahal and another whose name I don’t know.

McIntyre throws Moss over his head onto the walkway and goes for the others after that. McIntyre spots Corbin and waits for him only to be cornered once again by the rest of Corbin’s lackeys.

Corbin said as they brought McIntyre into the ring, that he’s going to take his head. Drew didn’t agree with that, so he does manage to fight off the idiot crew and fixes his sight on Corbin, but Happy runs like a little cockroach. So, there was no winner, really.

Charlotte Flair revealed her ignorance last week by saying that Ronda Rousey is a “one-trick pony” with her arm bar move; although, Ronda is calculating when she demonstrates her skills. Flair shows up again to bask in her 13 championships. She claims that Ronda was taking advantage of her wearing heels and a suit when Flair tapped out.

For a moment there I thought I heard the fans say “beat her up” towards Ronda. I almost chocked on laughter. Flair reminds Ronda that she is the most decorated female wrestler in WWE, but Ronda makes it known that she will be the one going home with Flair’s arm and the title.

Lesnar left SmackDown tonight because Reigns didn’t show up. That was mind-blowing. Rick Boogs and Shinsuke Nakamura did another WWE Off Road Toyota commercial break with surfboards.

Nattie and Shayna are seen as the baddest and cruelest women’s duo in WWE, I’ve personally never seen Shayna wrestle, but just by the look on her face tonight, damn. She looks like she would crack your spine repeatedly.

Both Natalya and Shayna grab Naomi’s legs and slam it on opposite ends of her body. That must have been a big ouchy. There was a moment during the match when Shayna twisted Naomi’s ankle causing her to limp. Sasha Banks takes both girls out by flipping them easy, Shayna with her legs and Nattie with her arms.

Naomi takes Shayna out by jumping her from behind outside the ring. Banks uses Nattie to push her against Queen Zelina off the ring’s edge because Her Majesty felt the need to stand there.

Natalya grabs Banks from her ankles and fails to throw her against Zelina and Carmella who were watching the match. They weren’t really paying attention. One of the announcers even mentions that Carmella should be focusing on her upcoming adversaries at WrestleMania rather than thinking too much about her and Corey’s reality show and succulent wine.

Banks grabs Nattie by her shoulders, raises her legs and knees Nattie in her face knocking her out as Naomi and The Boss take the win.

The Usos came in the ring to make an announcement saying they don’t have a match for WrestleMania only for Nakamura and Boogs to show up to challenge the Ones.

Given that Boogs is injured, Jey challenges Boogs that if he can win a one-legged match, he and Nakamura can go to WrestleMania against the Usos.

Boogs pretended to be hurt and tramples Jey badly. The victory was short lived because Jimmy used Boogs’ guitar to hit him in the back with. Ouchy again.

It has been confirmed that both Roman Reigns and Brock Lesnar will be there next week. That outburst though. I know I would have been beyond furious if that happened to me. Continue reading to hear about another rage party that took place tonight. Stay tuned.

The calculating, but irritating Sami Zayn wanted a rematch against Ricochet to win his title back tonight. Ricochet is actually glad that Johnny Knoxville arrived during his match of last week given his watched him for a while.

Austin Theory shows up to taunt Pat McAfee. If you don’t remember, Theory and McAfee have a match at WrestleMania. I mentioned outbursts earlier, McAfee beat the living hell out of Theory after he slapped him again. McAfee used Theory’s head as a mallet to hit the announcement table with; although, his co-worker told him not to get… ha! Angry.

Theory revealed visible signs of a wound behind his right lower ear. The match between Zayn and Ricochet got heavily distracted by this long-awaited altercation between Theory and McAfee set up last week. McAfee got escorted out the stadium due to that, but I must say, he seemed to have enjoyed himself.

The official fight continues as Rico grabs Zayn by the neck using his legs and slugged him over. There were some famous chest slaps too from Ricochet. Zayn grabs Rico in a sitting position on his shoulders and clacks him onto the ring floor.

I think Zayn’s missed submission slipped too quickly after that moment. Not that I wanted him to win, guys. Ew. Anyway, Rico b*tch slaps Zayn outside of the ring like an overbearing aristocrat.

Rico puts Zayn on his shoulders, throws him and adds a fast face kick to knock Sami out for a little bit. Rico then goes onto the top ropes, but Zayn gets up earlier then expected and throws Rico where the audience is. Ricochet does a backflip and gets kneed by Zayn and causes a failed submission. Sami fails again with the thunder bomb move. It was apparent that Knoxville is getting in Zayn’s head for the phone number prank.

A Super Plex move from Zayn from the top rope followed and now both men are woozy. Zayn was about to perform his famous kick that knocked Knoxville out only for Rico to use his knee to Zayn’s face.

Later Ricochet performs his 630 move to regain the win.

A fight broke out between Ronda Rousey and Charlotte Flair backstage using a red car as blackout weapon. Punches were thrown. Kicks were activated. And the security guys, late as always to breakup the fight.

Flair suplexes Ronda onto the car and places her into submission. A close up of Ronda’s face revealed noticeable pain. It turned red. I kept waiting for my girl Ronda to flip that arrogant stick with glitter right off the car, but… she lost today.