Mat Matters: How to bring Cody back to the WWE… for life 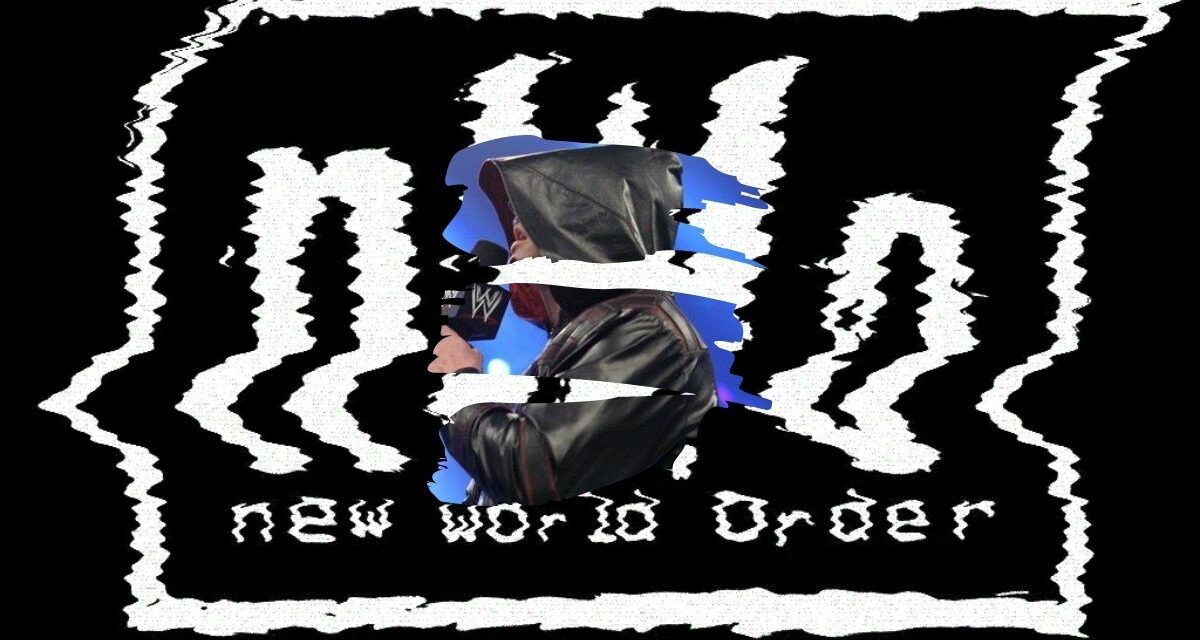 There is a lot of buzz that Cody Rhodes could be heading back to WWE after his surprising departure from AEW last month. Will he or won’t he show up at WrestleMania? Naturally, my mind wandered to some fantasy booking and so we have…

Scene One: A weekly Raw telecast

Rey Mysterio is set to take on The Miz, who is waiting in the ring. Mysterio’s music hits but he is nowhere to be found. The referee looks confused as does The Miz. Finally, Mysterio is found by Dominik laying on the ground outside the production truck. Dominik calls for help. He notices a dent in the side of the truck. The referee questions The Miz. The Miz throws up his hands feigning innocence. The match is called.

Later in the broadcast we see Rey on a stretcher wheeled into an ambulance. Dominik is with him. He blames The Miz for what’s happened to his father, who claims he was attacked and thrown into the side of the production truck. He vows revenge on The Miz.

The Miz is interviewed backstage. He has no idea what happened to Rey and denies all responsibility. He seems genuine.

Throughout the broadcast strange things keep happening. The wrong entrances are played. The lights go out unexpectedly. Finally, one or both of the general managers head to the production truck. The GM demands to know what’s going on. They find the production crew has been locked out of the truck. The GM calls in security.

Later on, we see security officials break down the door and find a stranger inside who apparently has been tampering with the controls, the cause of all the chaos. Nobody knows who he is or why he did what he did. The GM wonders if the incident on Raw is linked to this situation. Just before the stranger is arrested and taken away he keeps repeating: “There’s no way out. We are everywhere. You let us in.” 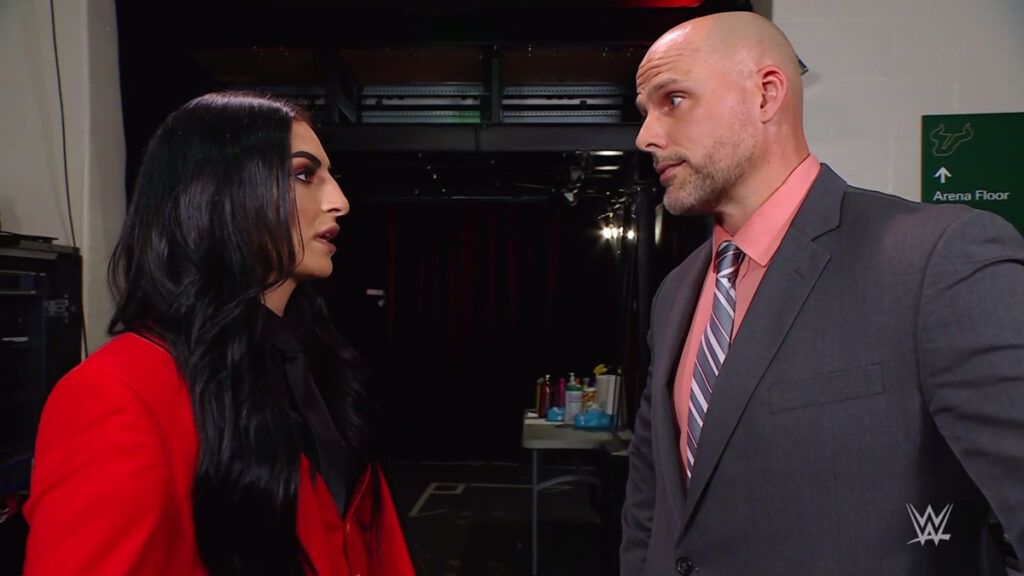 One of the Raw GMs receives an urgent phone call. They are called away on a personal matter. Cameras catch up with the official in backstage parking lot area as they prepare to leave. Their requested ride arrives and they are almost run over. The vehicle flees the scene with screeching tires. The shaken GM receives a mysterious text moments later. “There’s no way out. We are everywhere. You let us in.”

Backstage is somewhat chaotic. Security has been increased due to the threats. We see superstars being checked and questioned as they enter the arena. The commentators remark that WWE is under siege from an unknown threat and that everyone in on edge. During one of the matches, a cameraman leaps into the ring and hits a face superstar in the head with a camera. The heel is happy to take the win. The cameraman is caught by security before they can flee. The commentators do recognize the attacker. He has been a WWE employee for more than 10 years. Everyone is shocked. As the attacker is being led away in handcuffs they say: “There’s no way out. We are everywhere. You let us in.”

Security is tight. Anxiety is high. Superstars and commentators speak on camera about the fact that nobody is safe. One of the GMs is shown speaking to security and calling WWE head office. The other GM has not arrived at the arena. Something is wrong but the show must go on. There are check-ins throughout the broadcast. The missing GM is nowhere to be found. At the end of the show, the ring collapses during the main event. The match is called off. Fans in the arena are not happy. More sabotage is suspected by the skittish commentators who abandon their post and head to the back flocked by security.

More nervousness among staff and talent. The missing GM still hasn’t been located. Near the end of the show a security personal and the lone GM follow messages which lead them to a parked car in the backstage area. There is noise coming from the trunk of the car. The GM instructs security to break into the trunk. They do. Inside is the missing GM bound and gagged. Written on the inside of the trunk are three spray-painted letters: “nWo”. The show fades to black. 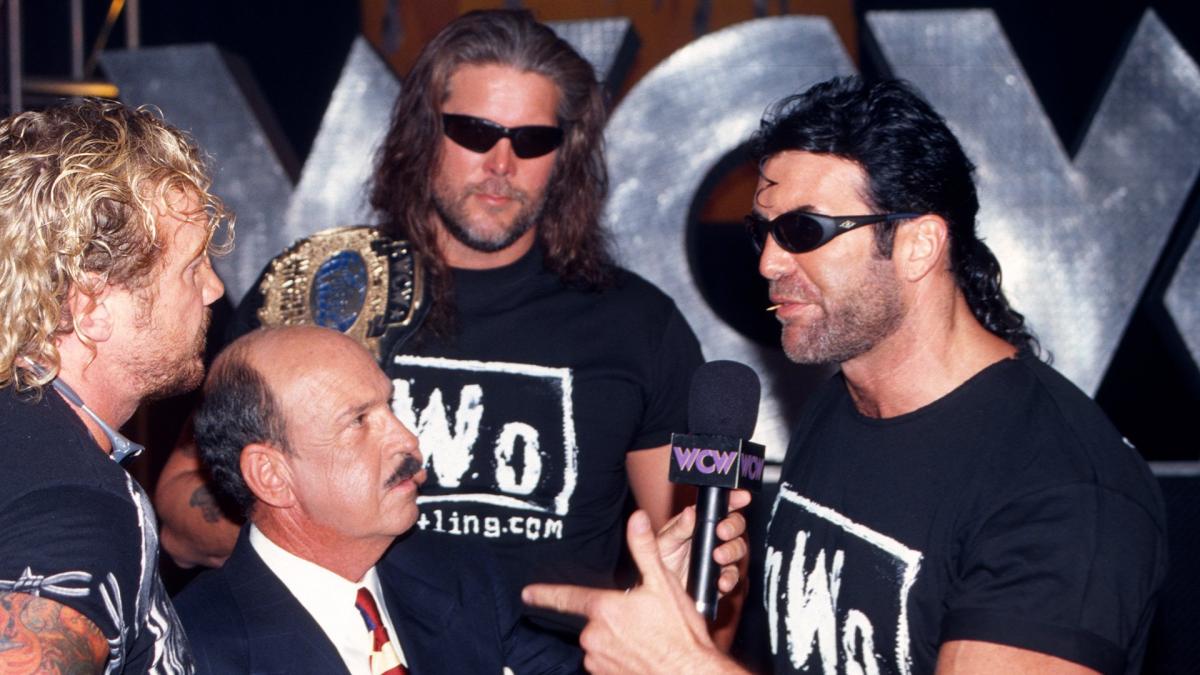 We learn that the kidnapped GM was jumped on the way to Raw, was held by mysterious strangers, brought to the arena and left there by his assailants. We are told that Kevin Nash and Scott Hall will appear via satellite, Zoom, whatever, to speak to the accusations that the nWo is behind everything. During the segment, Hall and Nash deny any involvement whatsoever again and again. They allude to the fact that neither of them have spoken to Hollywood Hogan for quite some time, though. At the end of the show, the commentators announce an update. Hollywood Hogan will be live on Smackdown to answer the accusations made by Hall and Nash.

Hogan comes down to the ring to speak to the GMs. He arrives as “Hulk Hogan” though not “Hollywood Hogan.” He also denies any involvement. He does his usual posing and flexing for the crowd. The announcers declare that the investigation has hit another dead end. 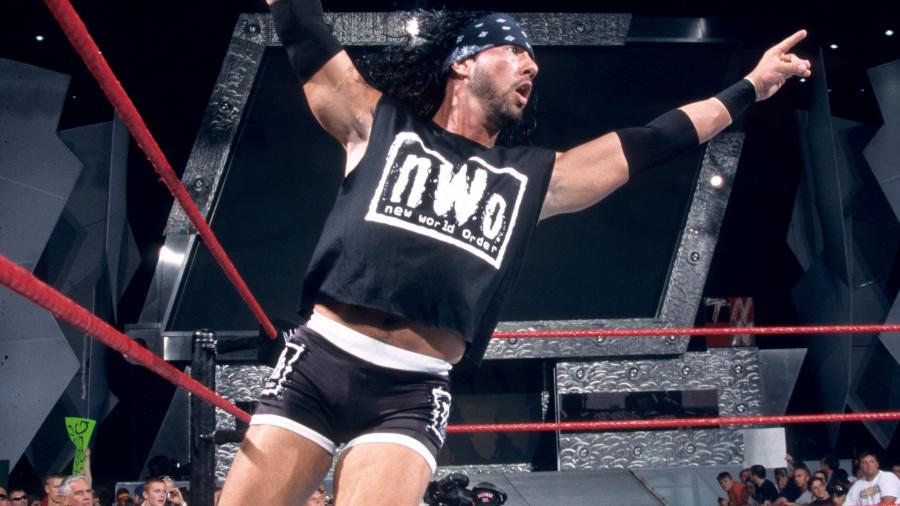 Hogan comes down to the ring. He declares his innocence again. He calls the attackers cowards, etc. Out comes X-Pac with his full nWo entrance. He gets right into Hogan’s face. He accuses Hogan of turning on the nWo after WrestleMania 18. He started sucking up to the WWE universe, which was against everything the nWo stood for.

“What about nWo for life?” he demands to know.

He slaps Hogan in the face. Hogan and X-Pac brawl. The announcers are even more confused about what is going on.

Out of the front row, a hooded figure jumps into the ring amid all the chaos. He and X-Pac lay a beating on Hogan. The figure rips off his hoodie. It is Cody Rhodes. He is wearing an nWo t-shirt.

“You all know who I am but you don’t know why I’m here?” says Cody asking if the WWE universe “wants a war”?

He demands that the WWE give him and X-Pac working contracts or they will continue to bring the WWE to its knees. 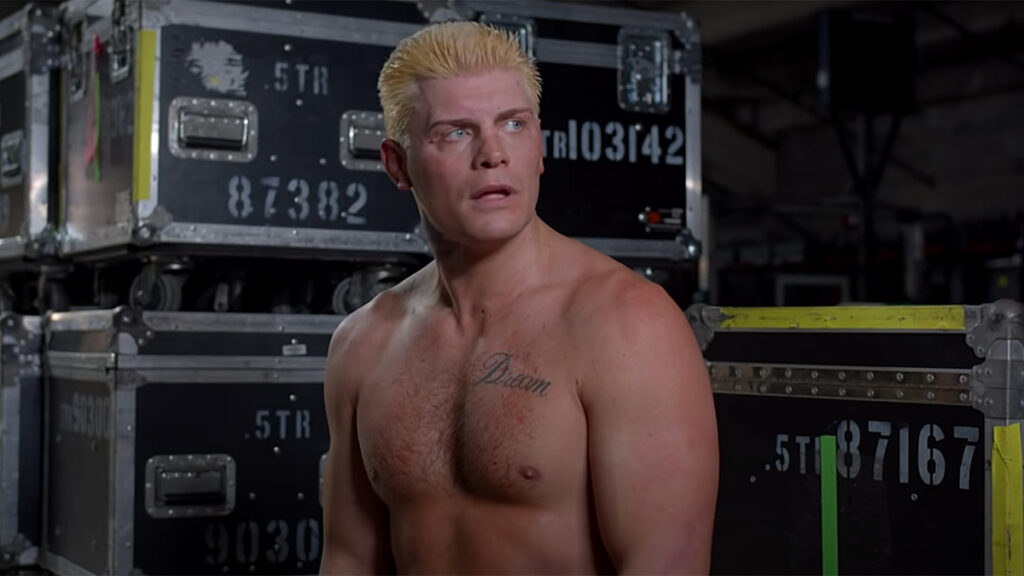 The angry GMs arrive on the entrance ramp with Rey Mysterio in tow. Mysterio is furious now that he knows who attacked him all those weeks ago and put him in the hospital.

The GMs offer X-Pac and Cody a deal. The WWE wants revenge for everything that has happened. The deal is Cody will face Mysterio at the next pay-per-view. If Mysterio wins, Cody and X-Pac leave WWE, never to return. If Cody wins, he, X-Pac and the nWo are granted WWE contracts. Cody and X-Pac accept the challenge as the security around the GMs and Mysterio attack them instead of protecting them.

Cody and X-Pac answer: “There’s no way out.” as they paint the letters nWo on Hogan’s back.

The show fades to black with the future of the WWE in jeopardy.