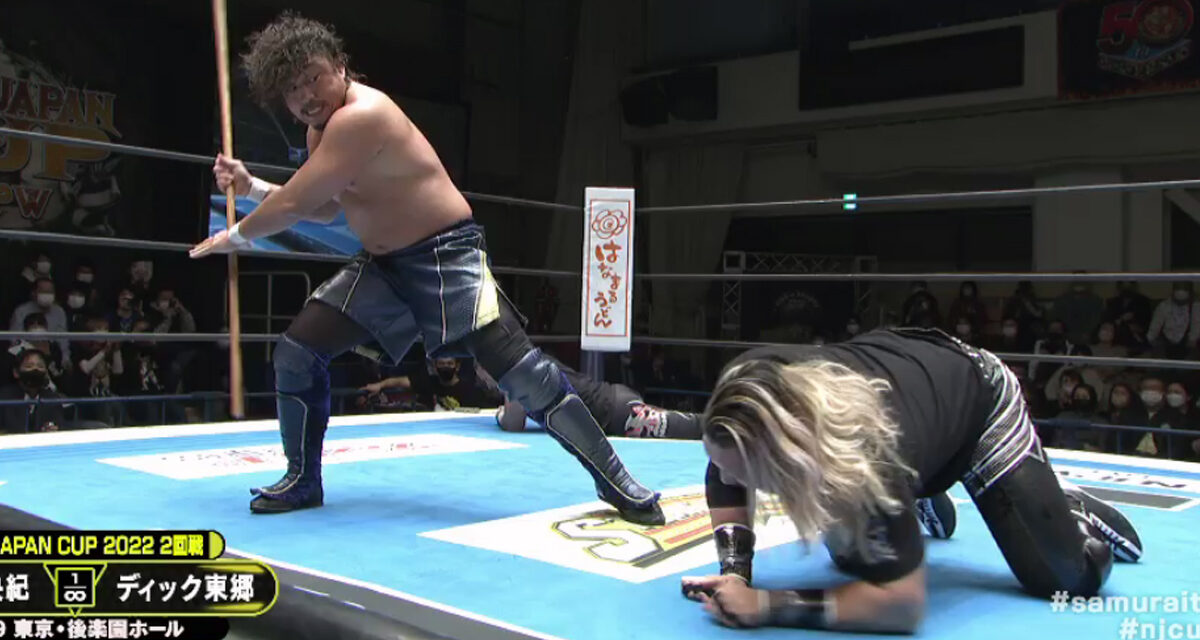 Chima, Kazuchika Okada and Hirooki Goto advanced to round three of the New Japan Cup on night four of the tournament.

Chima outsmarted a cagey and crafty Yoshinobu Kanemaru. Kanemaru worked over Chima’s knee but couldn’t make him submit. Kanemaru took a glug of whiskey and dumped the rest all over Chima in frustration. Chima was just playing possum though. He super kicked Kanemaru in the face knocking the whiskey out of his mouth and pinned him with his Meteora.

Goto got one over on The House of Torture after defeating Dick Togo. Togo used his garotte but it wasn’t enough to pin Goto. When the lights went out and turned back on Togo was choking Goto with the garotte again and the official is on the floor. Evil attempted to hit Goto with his own staff. Goto fought both men off. He smashed his staff over Evil’s back and then Togo’s. He made Togo submit to move on.

IWGP World Heavyweight Champion Okaka pinned the rookie Master Wato with a flying elbow smash, a Landslide and a Rainmaker.

Chima will face Hirooki Goto in the next round.

With The Ace down on the floor Fale pins Tiger Mask with an assisted Grenade Launcher from Owens. Owens attacks Tiger Mask after the bell. He brains him with shots to the head and then is about to drop him on his head with a Package Piledriver but the official stops him. The Ace and Tiger Mask have to be assisted to the back.

Gedo drops Naito with a brass knuckle shot to the gut. Gedo labels Bush with his brass knuckles knocking him out. Sho puts on Snake Bite to make it all look good. Poor Bushi. He has so much to give and NJPW holds him down.

Ishimori punches Khan in the “lower abdomen” as the official to distracted trying to stop Yujiro from bringing his cane into the ring. Evil pins Khan with Everything Is Evil.

Takagi pins Douki with Made in Japan. Suzuki punishes Hiromu and his knee after the match.