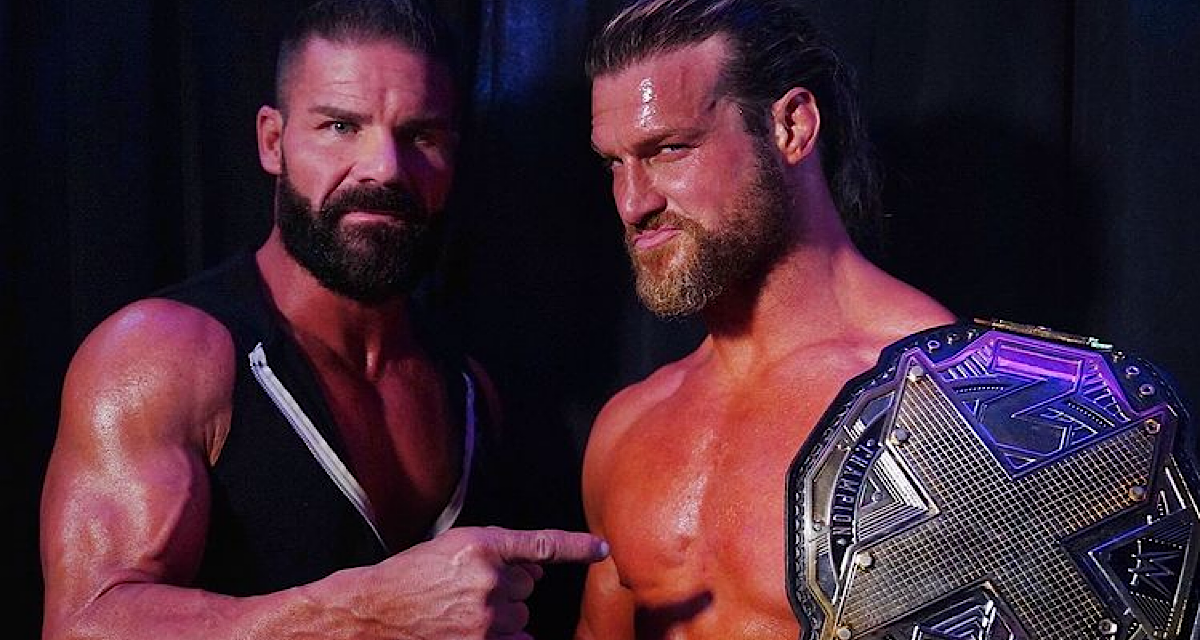 The queen of sleep style and her partner Kai are a pink-clad, well-oiled machine in the Women’s Dusty Cup. Although Kai is still a schizophrenic, Choo isn’t half bad with total consciousness. Preceding commercial, Gigi Dolin and Jacy Jayne exit the Toxic Lounge to take out Gonzalez ringside. Jade fends for herself until Gonzalez makes the one-legged comeback, which ultimately gives out when attempting the Chingona Bomb. After hesitation, Kai hits the running boot, and Choo delivers a splash for three.

Tommaso Ciampa screams in the back, saying that “never before has there been this big of a gap between number one and number two. And you’re looking at number one — me, Tommaso Ciampa, the main event, your soon to be three-time NXT Champion.”

Cameras catch the Creed Brothers moist and battered after an attack in the rainy parking lot. Diamond Mine’s Roderick Strong, Malcolm Bivens, and Ivy Nile attend to the fallen soldiers.

“I thought about it — shopping carts. More wheels than doors on planet earth thanks to shopping carts,” says commentator Wade Barrett on the right side of history. Meanwhile, Sarray blindsides Stratton, and Henley capitalizes with a Shining Wizard for victory. Fellow countrymen Brooks Jensen and Josh Briggs celebrate afterwards.

During this week’s lesson, Andre Chase blames his students’ banner botch for his loss. He curses out Jimmy for questioning Bodhi Hayward’s clearly injured eye at the hands of Von Wagner.

Carmelo Hayes and Trick Williams discuss their goated North American Championship reign inside the barbershop. “The A Champ don’t never miss,” says Hayes ahead of his multi-man ladder match in Dallas.

Lashing Out With Lash Legend returns with special guest Nikkita Lyons. “That’s all the time we have,” says a heated Legend after a one-minute argument.

Imperium denies attacking the Creed Brothers before being interrupted by MSK, who are willing to take their place. Brooks Jensen and Josh Briggs accuse Legado del Fantasma of attacking them, but Fallon Henley questions her teammates too.

Waller is immediately hit with a lariat, and Knight stomps a mudhole into his rival. “In-ring, he is brilliant, and that’s what makes me dislike him even more,” says commentary about the fast-rising Waller, who turns the tide with a rolling stunner. Knight comes back with a box-jump superplex and BFT, popping the crowd big as per usual; “One, yeah! Two, yeah!” alternates the referee and audience. After picture-in-picture, Knight knocks Waller off the ringside platform like Scar to Mufasa, but bodyguard Sanga catches him. Knight stifles him with handcuffs and gives Waller his deserved comeuppance, slamming him through a table for a nine-count. Recuperating from a steel bludgeoning from Knight, Waller delivers a beautiful springboard elbow through the announce desk, using Sanga for leverage to become last man standing. More so than Knight, even, Waller is the future of WWE.

NXT Champion Bron Breakker gives a nice monologue about loving this business and putting the work in towards NXT Stand & Deliver.

Meanwhile in the Toxic Lounge, Edris Enofe and Malik Blade take out the assistants to get closer to Mandy Rose. Security tonight is clearly lacking. Catanzaro is on top proceeding commercial, but Shirai comes back with a Tiger Feint and missile dropkick. The opposition connects with a lethal assisted reverse hurricanrana on Ray, but Shirai delivers her signature moonsault for the pinfall. Getting revenge for earlier, Cora Jade attacks Rose in the Toxic Lounge as Enofe and Blade pull them apart.

The champions are “looking real jacked, baby” as they offset MSK’s speed with strength. Orlando is back to booing MSK, apparently preferring the injured Creed Brothers. But the aforementioned brothers Creed interrupt the matchup, taking out all four competitors before the segment’s abrupt end. The point of this was missing like NXT’s desperately-needed security team.

A vignette for NXT UK’s A-Kid, the first ever Heritage Cup winner, promotes his U.S. debut next week.

Ciampa and Breakker battle for gold yet again, but Monday Night Raw’s Ziggler is added into the mix. The fan favorite is Ciampa, simultaneously taking out the opposition before picture-in-picture with running lariats. The champion holds Ciampa in a Steiner Recliner as Ziggler cinches the Sleeper, and the competitors trade strikes thereafter. Ziggler hits the Zig Zag on Ciampa for two, and the latter recuperates with a lungblower. Breakker seemingly flops to the outside but comes back with spears for both challengers. However, fellow Dirty Dawg Robert Roode interferes, and Ziggler connects with a superkick on Ciampa to become the new NXT Champion!

Props to NXT for pulling a sneaky and shaking up the NXT record books by having main-roster veteran Ziggler take the developmental title — the only major championship he’d have a chance at winning. While that headline will define tonight’s episode, Knight versus Waller deserves a shout out as well, concluding one of NXT 2.0’s best feuds on a high note.