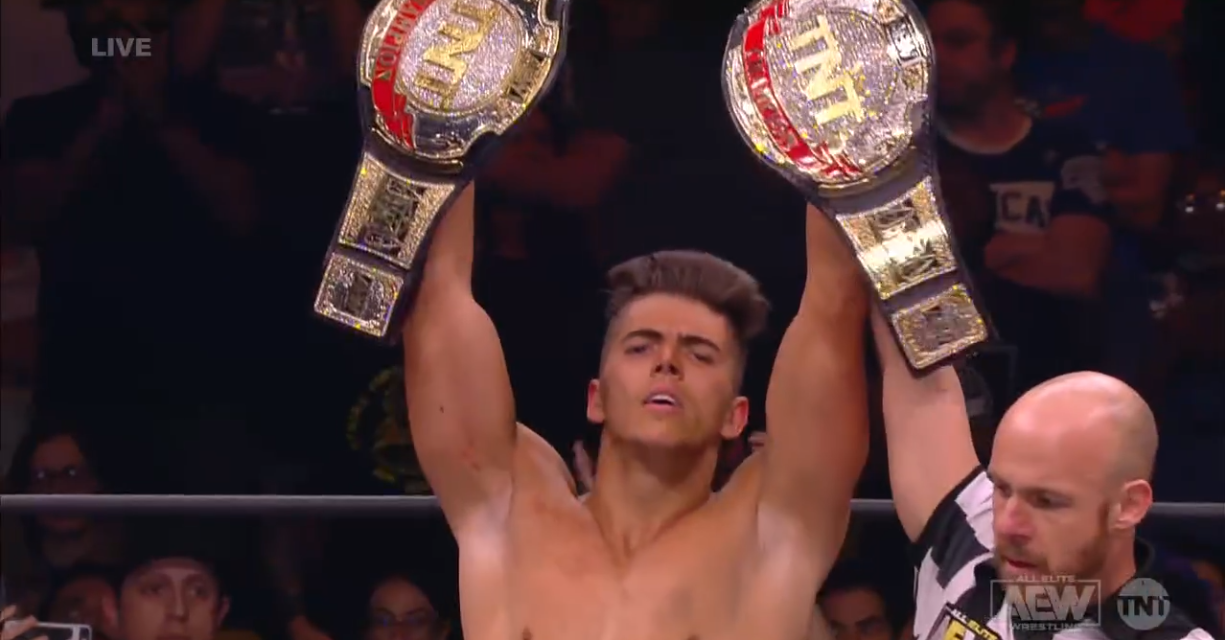 Tonight’s Rampage is the final show before Revolution and that means its’ all live, baby! Friday nights seem to be the home of Serena Deeb’s five minute rookie challenge. In addition, we have a triple threat match for the TNT title tonight between champion Sammy Guevara, Darby Allin and Andrade El Idolo, despite Sammy and Darby teaming up on Sunday. Enough talk, let’s get the show

Andrade wants no part of taking on Sammy and Darby at the same time and rolls to the floor. Guevara and Allin go to the floor, so Andrade rolls back into the ring. Andrade kind of has a point though, as Sammy and Darby team up on him in the ring. Allin breaks up the first pin on Andrade though. Allin and Sammy come to blows. Guevara with  a knee strike to Allin on the turnbuckle. Sammy wants a superplex, but Andrade swoops in and gets under Sammy. He power bombs both men to the mat.

Andrade tosses Sammy into the corner and then knocks Allin to the mat. Andrade goes up top, looking for a moonsault. Guevara and Allin roll away, but Andrade lands on his feet and connects with a standing moonsault on Guevara. Allin breaks up the pin. All three men trade chops. Andrade catches Darby on the coffin splash, but Sammy saves him with a superkick. Allin catches Andrade on the top turnbuckle and whips him with a belt. He hands Andrade in the tree of woe and Sammy connects with a coast to coast drop kick.

Allin dives through the ropes to take out Andrade on the floor. Sammy goes for a roll up as Darby enters the ring, but Allin counters. Sammy kicks out. Sammy looks for a backslide, but Andrade kicks Allin in the face and then hits a driver on Sammy. Allin with a stunner to Andrade and Sammy hits the GTH. Allin tosses Guevara out of the ring and hits the Coffin Drop on Andrade. Sammy scurries to the top turnbuckle and breaks the pun with senton. He covers Andrade and gets the three count.

After the bell, Sammy offers Allin a hand to help him up. Darby blows him off and rolls out of the ring.

Dan Lambert congratulates Sammy Guevara for defending his title against anyone but Scorpio Sky. Lambert made a deal with Tony Khan and Sammy will face Scorpio Sky on Dynamite next week.

JD Drake doesn’t even get an entrance, so yea, he’s done. It’s not a total squash. Drake gets a one count pin after a cannonball and a moonsault. Lee picks Drake up and sets him on the turnbuckle. Drake tries a cross body and Lee catches him. He sets Drake up and delivers a Death Valley Driver. He covers and picks up the win.

After the bell, the Wingmen hit the ring, but Lee fights them off. Ricky Starks and Powerhouse Hobbs start to make their way to the ring from commentary, but think better of it when Orange Cassidy walks out to back up Keith Lee.

After the brutal attack by MJF last week, CM Punk had a message for him. Max is going to find out that CM Punk is the master.

Tony Schiavone is with Jade Cargill and Smart Mark Sterling. Mark isn’t much of lawyer, reminding us that Tay Conti can’t attack Jade until at least 48 hours before the PPV thanks to a clause he put into the contract. Um, it is less then 48 out hours away and Tay jumps Cargill with  a kick.

Gray dives out of the ring at the bell, running from Deeb. Serena eventually catches her and beats her on the floor. She rolls Leila into the ring and hits a neck breaker through the ropes. Deeb applies a reverse choke in the middle of the ring and Gray taps.

After the bell, Deeb locks in the Serenity Lock. Hikura Shida runs in with a kendo stick and chases Deeb into the crowd.

Eddie Kingston doesn’t want to talk about his match with Chris Jericho. He calls out Jericho for trying to sow the seeds of doubt. He going to leave Jericho laying in the middle of the ring. Now, he’s going to grab a piece of peanut butter pie.

Page pummels Cage into the corner and then runs him off the apron, sending Cage flying into the security railing. After a commercial, Cage rains down punches in the corner on Page. Christian with a reverse DDT, but can’t get the pin. Cage goes up top, but Page rolls out of the ring. That proves to be the right move as Page is able to catch Christian with a cutter. Cage kicks out and follows with a diving head butt. Christian connects with a spear and looks for the Kill Switch. Page counters and drives Cage shoulder first into the ring post. Ethan wants the Ego’s Edge, but Cage drops down out of it. Christian hits the Kill Switch and covers to get the pin.

After the match, Jurassic Express joins their friend in the ring. The Young Bucks and ReDRagon walk out on stage and taunt the tag team champs. They are able to swipe the belts and celebrate like they won them. Jungle Boy launches himself over the top rope and wipes out all four men. That’s the show, see you at Revolution.

The Triple Threat TNT Title match to open the show should have been on Revolution. It’s that good, watch it. Three of the three and half stars are for that match and that match only.  The rest of the show can’t live up to the opening match and isn’t really worth watching if you missed it.