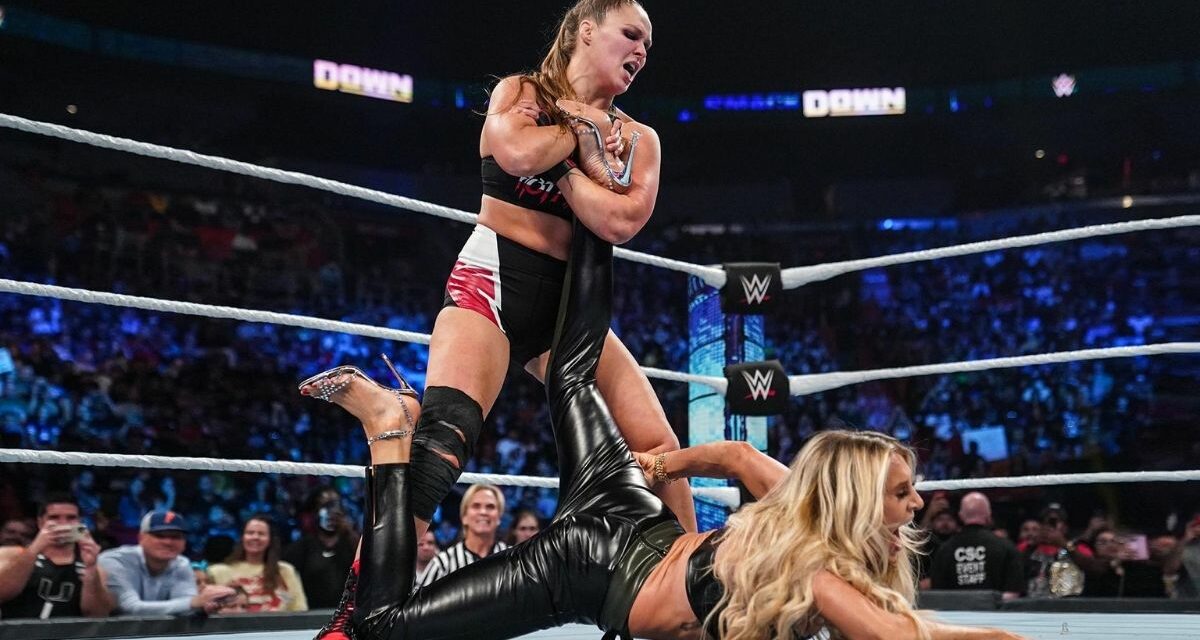 We are 29 days till the biggest event in WWE history, WrestleMania!

What was unfortunate is that the first thing you see is Paul Heyman talking. The weasel, the rat and the snake all wrapped up in one was praising Roman Reigns to be acknowledged once again.

Ronda Rousey talks about fighting for the first time at WrestleMania against Charlotte Flair. Deville went on to brag that she will smack Ronda given the name of tonight’s event. The Viking Raiders wanted to rip the Usos’ carcasses due to their loss of last week.

Ricochet announces he won’t lose to Sami Zayn. Zayn replies by saying he’ll cut the circulation to Ricochet’s body. Tonight Rico here will know why Zayn is so calculating. The crowd still hated Zayn, power to them. Now, on to the brawling!

Ricochet is described as exciting, amazing and fast by the announcers.

Ricochet almost put Zayn out of commission with a roll up at the start and could have won seconds into the match. Rico is giving everything he’s got into this fight.

Given that Zayn sees himself as a calculated as ever, he takes his time to achieve the win.

Ricochet does a backflip kick only to be caught and pushed by Zayn. A misdirect at its finest.

Zayn places Rico into a suplex and throws him onto the edge of the ring beyond the ropes, it was painful. Ricochet mentioned earlier before the fight that he wants to join the league of legends. Reference needed.

Rico jumps over the ropes only to be caught in a sitting position on Zayn’s shoulders and plummeted in the center of the ring. He then does a backflip onto Zayn outside the ring flawlessly. He looked like he was flying because he executed the move beautifully.

Johnny Knoxville, Sami Zayn’s number one enemy, distracts him with his t-shirt and presence. Rico took the opportunity to flip Zayn over and win. Everyone was ecstatic over the win. I like the fact that Zayn lost.

Friday Night Smackdown is being broadcasted from the energetic city of Miami.

Vince McMahon took part in a live interview with Pat McAfee on McAfee’s show. He will be inducting The Undertaker into the Hall of Fame. He also allows McAfee to wrestle too. Who? Keep on reading.

Zayn is pissed that he once again lost his Intercontinental Championship which was funny. He was seen flipping tables and stuff backstage. He was also mad at the camera man for following him. I applaud the guy for that. Knoxville follows Zayn a lot whether it’s on Twitter, Instagram or in person, so Zayn proposes he follows him to Dallas for what I assume is for WrestleMania. If not, that would have been creepy, don’t you think?

Austin Theory gets booed by the audience when he makes an abrupt entrance to speak to McAfee. Wherever McMahon goes Theory follows like a lost puppy.

Theory flames Pat McAfee for inviting McMahon on his radio talk show. McAfee was confused as to why Theory was talking to him like that. SURPRISE. Austin Theory is McAfee’s opponent. Just to prove how much more of an ass Theory is, he slaps McAfee with his microphone and walks away. Since McAfee was pissed at that attack, he rightfully vented and delivered this line “Jimmy ran to the bathroom” as he turned around referring to whoever it is that was sitting behind him having a well enough conversation to remember that person’s name.

Carmella wears a mask to protect her “reality star” face only to be kicked on the side of her face by Naomi. I was like “Yes, slap that mask right off, please.” It didn’t fall off.

Naomi gets distracted by Queen Zelina and then slapped repeatedly by Carmella.

Naomi kicks Carmella in the face again after she wines and weeps on her knees. Sad. Sasha helps Naomi by taking Queen Zelina out by knee kicking her in the face against the steel stairs near the announcement table.

Naomi comes in, knocks Carmella out and takes the win using her ‘Moonsault’ move. My girl Naomi eradicated Carmella’s ass till there were bones left, not even, dust.

Happy Corbin and Madcap Moss were playing poker while making fun of Drew McIntyre as they were prepared to watch his match.

Rick Boogs and Shinsuke Nakumara were advertising a Toyota car in Smackdown Off Road.

McIntyre and Mahal used to be part of a tag team in the past. We’ve got two warriors fighting.

Drew chest slaps Mahal before being dodged and placed into a failed submission from Jinder Mahal. You know, I thought I was meant to write his name as Tinder not Jinder. My bad.

There was a great throw over his shoulder from McIntyre. His strength during the match was breathtaking to watch. 3 2 1 ‘claymore’ from McIntyre and he receives the win.

His been gaining plenty of success lately. Watch out Happy Corbin because on WrestleMania day, McIntyre will tear your ass apart and get paid for it.

After his match, Drew McIntyre was being asked his opinion on Madcap and Happy Corbin and said “Nobody cares for them ” McIntyre asks the audience if they want to claw Corbin’s eyes out every time he’s on screen. Apparently, it’s a go from the fans.

While in the poker room, Moss tries to make a joke about McIntyre yet no one laughed, not even the lackeys they surrounded themselves with.

I still can’t with the fact that one of Reigns’ security guys got a chair thrown at his face as they rewind the footage of last week’s event contract signing. I felt bad, but I couldn’t stop laughing.

There was a moment where Shinsuke Nakumara and Rick Boogs were entertaining the fans with Boogs’ guitar only to be ambushed by the Bloodline – The Usos. “Reigns said it was his time.” said the announcer. Time to be acknowledged. Again. Brace yourselves people.

No match outperforms this main event. Some love Reigns and some hate him. Last week the crowd was booing, now I hear chants.

I think Reigns lost his words at some point after entering the ring, watching him figure out what to say was unexpectedly funny.

“It’s not a prediction, it’s a spoiler.” said Paul Heyman, his famous words to describe to upcoming match that Roman Reigns will win. Reigns makes it clear once again that he will annihilate Brock Lesnar at WrestleMania.

I feel like I was being smacked in the face as Reigns said “me, me, me.” The announcers can tell that Reigns is losing it. Lesnar is getting in his head. Maybe?

The Usos (C) vs. The Viking Raiders – Tag Team Championship

I feel like there should have been an explosion when the Raiders made their entrance, just a thought as they marched.

Ivar jumps off the high rope and lands on Jey’s stomach, but before Ivar can claim the win, Jimmy helps his brother allowing Ivar to hit himself against the pole later on.

The Usos lift Erik and slams him in the ring. “You’re not on my level!” said Jey Uso outside the ring as he went after Ivar. The Usos grabbed Ivar and threw him into the audience.

One of the announcers said “no” that the Raiders won’t be able to get back in this tag team title match given the end result. Foreshadowing. Erik’s ass was in the camera, thought you should know.

The Usos work together to put Erik into the ground and take the win. They remain the tag team champions

Sheamus looked like a pimp during his entrance. He’s mad that Ridge Holland didn’t get him an ATV like Kofi Kingston got Big E for his birthday.

Kofi was shaking his ass till Holland whacked him with a steel chair then hits the ATV. Sheamus and Holland stole New Day’s ride during the fight.

After taking the ATV, Sheamus and Holland sledgehammered it backstage.

They never planned to be in this match, they wanted the ride.

Johnny Knoxville comments that Sami Zayn is a “Sad, strange little man.”  Knoxville broke his dick one time, but his tough regardless of the knock out kick he received from Zayn.

Corbin and Moss are still messing around, so McIntyre put his sword in the dart board to scream, ‘you’re in the way!’

I don’t like Deville, but I did like her black and white wrestling outfit. I can admit that.

Everyone wants Rousey to break Deville to bits. So do I. Charlotte Flair shows up again as she slow walks her way to the announcers table.

In the ring, Deville isn’t an official, so she needed to stop acting like she is. Flair distracts Rousey, and she ends up being pushed around by Deville. A failed submission from Deville came soon after. Flair expresses that she isn’t concerned by Rousey for WrestleMania because she knows how to get out of any choke hold Rousey puts her in.

Deville tries to tap Rousey out. Rousey uses the rope to strangle Deville.

Ronda dragged Deville like a rag doll while using her arm, placed Deville into submission using her ‘Viper Pit’ move and Deville tapped out.

Ronda wanted Flair in the ring and got her to tap out even though it wasn’t an official match. Flair talked smack, and she was trampled accordingly.

A match between Queen Zelina and Sasha Banks is taking place next week along with a tag team fight consisting of Big E & Kofi Kingston vs. Sheamus & Ridge Holland.

I yelled and laughed at the TV too much tonight, it was filled with funny bits.