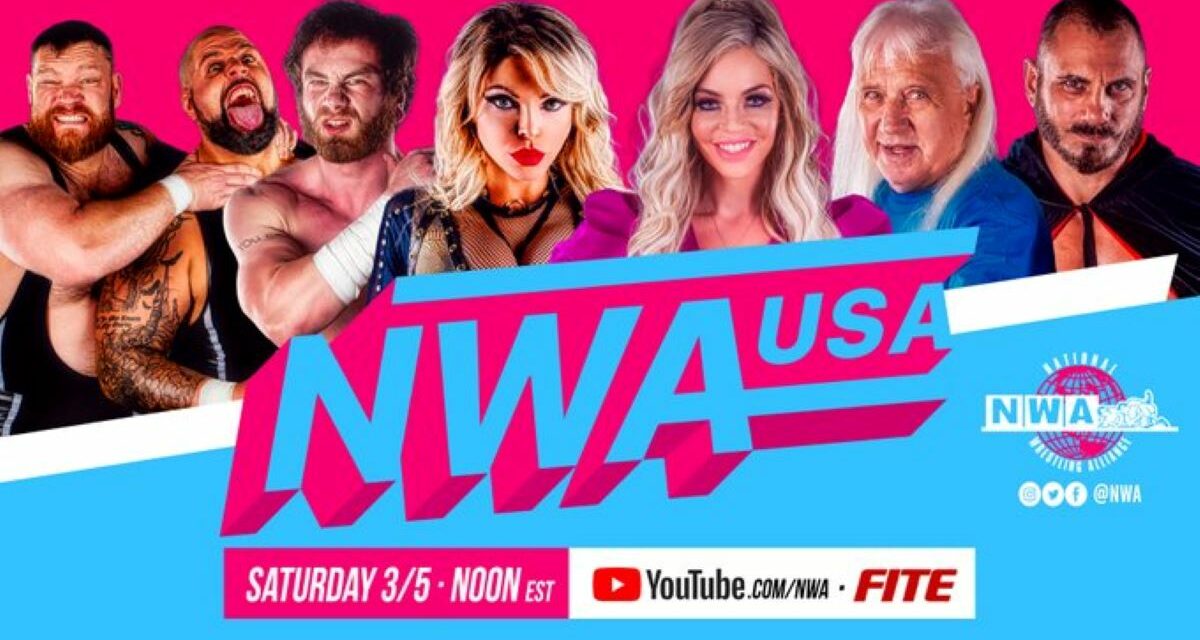 As the season one of NWA USA draws to a close, this show has all sorts of action with Austin Aries and Ricky Morton in the main event, and it also has Natalia Markova stepping in the ring to face…May Valentine.  Is the Brazilian journalist able to take on the Russian Crush?  Will Morton be able to show some rock n’ roll to Aries?

We’ll find out as we head to the GPB Studios in Atlanta, GA.  Your commentators Joe Galli, Tim Storm, and Velvet Sky have the call.

We go to The Podium with Kyle Davis, and he chats with his broadcast partner, May Valentine.  She says she didn’t want to do this, but Valentine states Markova has been bullying her way to the talent and the staff, and she finally had enough.  Storm told her that if she is going to be physical, it has to be in the ring.  Davis, trying to be helpful, says she can take the cowards way and lay down for the pin, but Valentine will give it all she’s got in the ring. 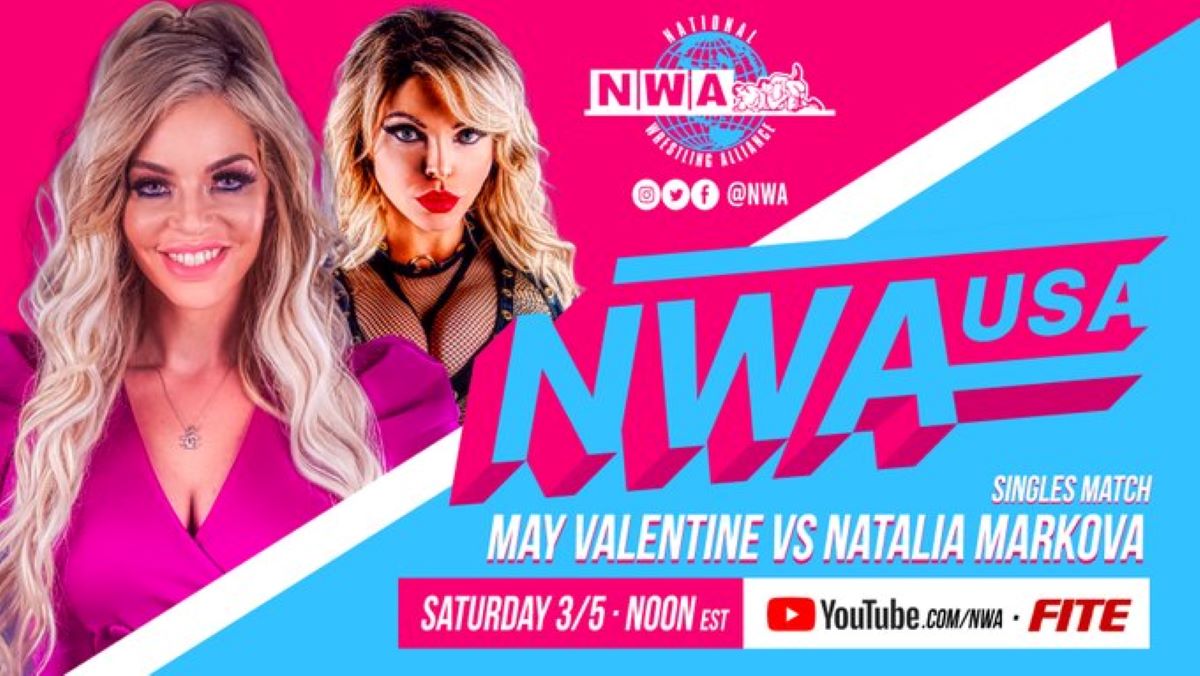 Natalia Markova vs. May Valentine

Early in the match, Markova stalks Valentine.  She goes for a couple of clotheslines, but Valentine manages to duck out of the way.  Markova then grabs her hair and shoves Valentine to the corner.  As Markova is ready to have more fun, Kamille appears from the corner and spears the Russian Crush in half, and…well…

Your Winner via Disqualification:  Natalia Markova

Tim Storm isn’t happy with this ending, and he leaves the broadcast booth to go make a match.

There’s a recap of the action on NWA POWERRR this last week, but really you should be reading it here.  You’d be a lot cooler if you did.

We go back to Storm talking to Kamille, and the Managing Director of NWA USA tells the Brickhouse to get in the ring.  Well, one hair tie later and the match is official in that we get…

Kamille is in her street clothes, but she is still able to take the fight to Markova.  Kamille gets a gutwrench suplex to the Russian.  As she gets up, Kamille flings Markova to the second turnbuckle.  Now the match is textbook Brickhouse, as she gets a steamroller and prepares to deliver the spear, but Markova sidesteps and Kamille crashes to the ring post.  Markova is feeling confident, but before she can get any offense in, Kenzie Paige gets in the ring and starts slugging away, which means for the second time…

This brings out the Managing Co-Director herself, Madusa, and she tells Paige to come out of the ring.  While we can’t see from the camera angle what is being said by Madusa, commentary and Paige’s pained face tell it all, as she is suspended from in-ring action.

May Valentine is backstage in her natural habitat, and she is with Colby Corino and The Fixers. Corino states he doesn’t want to be compared to Austin Aries, because he better than him, and he’ll prove it during the finals of the NWA Junior Heavyweight tournament finals. When Valentine asks if the Fixers will be in his corner, Jay Bradley says they’ll play by the rules.

Like an enigma wrapped in a riddle, and grilled with cheese and served on a bun.  And now I’m hungry.

Bet before I break for lunch, it’s time for the Main Event between… 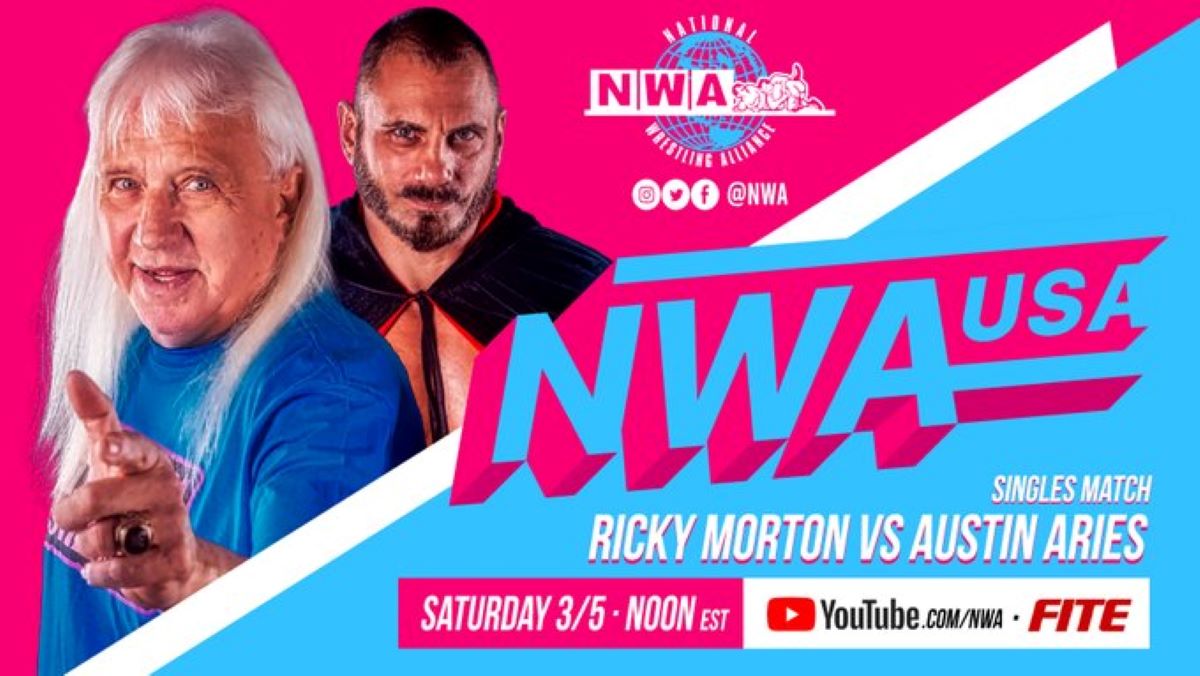 The younger Morton is out at ringside to cheerlead for his dad (and if you were watching the show, you’ll see our own Greg Oliver on the far left side of the hard camera in attendance.  Look for a man wearing a Cleveland Browns mask.  Oh, and on that topic, check out the interview Greg did with the Kerry Morton, if you missed it last time).

Anyway, back to the action, Aries starts getting into Kerry s head, but an arm drag by Ricky Morton stuns The Greatest Man that Ever Lived.  Refocused, Aries takes control early on, with but Morton answers with punches and a side knee lift.  Aries goes outside to collect himself.  He eyes Kerry, and pie faces the younger Morton. 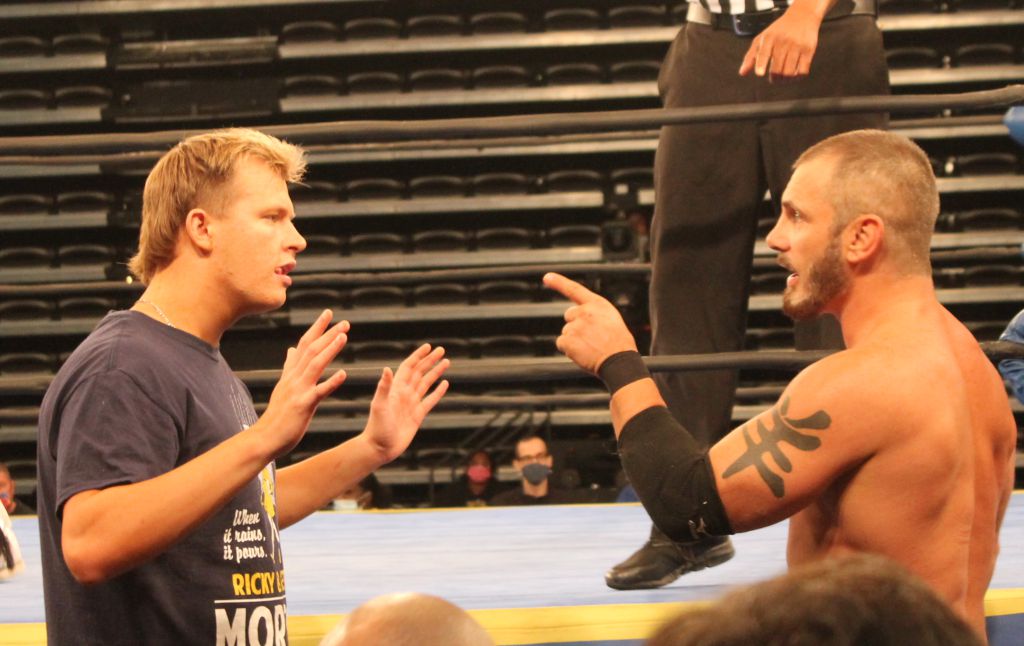 Kerry Morton is confronted by Austin Aries at an NWA USA taping on December 3, 2021 in Atlanta. Photo by Greg Oliver

The elder Morton sees this, and slingshots Aries back in the ring.  Aries apologies and offers his hand, but he sucked Morton in with a kick to the midsection.  Aries runs the ropes, and Morton catches him with a sunset powerbomb to a pin, but Aries gets his foot on the ropes.

Aries rolls out of the ring again, but this time Kerry Morton grabs him by trunks and sends him back to his dad.  Once in the ring, Aries nails Morton with the Discus Five-arm, and send him to the corner, where Aries follows up with his signature IED dropkick in the corner.  Aries goes for the brainbuster, but the veteran Morton rolls him up for a two count.  Morton then attempts a backslider for another two count, but Aries counters with the Last Chancery submission.  Morton manages to escape the hold, and rolls up Aries, but Aries reverses and rolls up Morton with a handful of tights for the one, two, and three.

Your Winner via Pinfall:  Austin Aries

As Aries celebrates the win, it’s the fans in attendance that chant for “rock N’ Roll” as the show goes to credits.

A good way to end to the first season of the NWA USA, and Ricky Morton still shows he can rock n’ roll with the best of them.  As for the issues between Markova and Valentine and Kamille, I don’t think it’s over anytime soon (I’m not sure on Kenzie Paige’s status, as she is under contract with IMPACT Wrestling).

As the Crockett Cup looms around the corner, there’s a lot to see what will take place.

In  any case, thanks to Rusty Loudermilk for his contributions, and we’ll see you for the next season of  NWA USA!